The Oregon caves were the first thing we visited on the trip where we had absolutely no prior experience. We hadn't seen much of the coast before, but we had made a brief visit to part of it in the past. The closest we had gotten to the Oregon Caves was driving through Cave Junction on our way between the Bay Area and Bend.

There was some anxiety about road closures due to forest fires, but we were able to make it to the caves without incident. 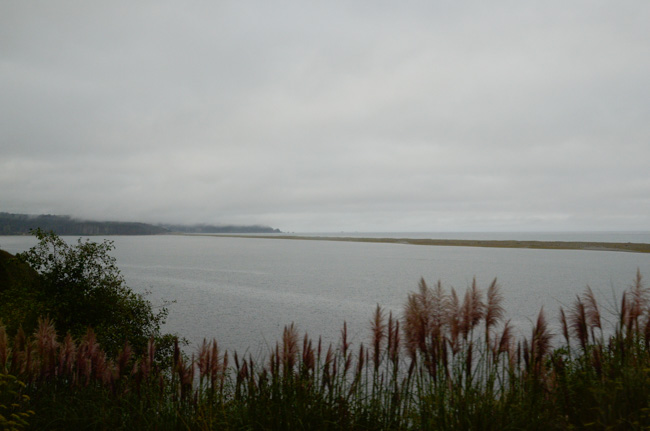 Along the California coast north of Eureka is a string of freshwater lagoons. This is the southernmost: Big Lagoon. The sandbar stretching across from the right of the image separates the Pacific from the fresh water supplied by Maple Creek.

It seems strange to me that such a small ribbon of vegetated sand can keep the waters separated, but Carol said that was the case. On occasion the level of the lagoon will rise above sea level and a temporary breach will form, but the flow of freshwater keeps the ocean out.

We bade the Pacific coast farewell at the Prairie Creek Redwoods State Park Visitors' Center. Shortly thereafter we headed inland for the rest of our journey.

In many places along our way the roads were under construction. The torrential rains of the previous winter had washed out their foundations. Lynn told us that an engineer had told him that anyone who truly understood the nature of the land on which these roads were built would, well, choose another route.

But then you'd miss all the views!

This is one of my favorite pictures and I took it from the bus as we waited our turn over the one-lane road around the construction.

We had another picnic lunch along the Smith River in the Jedediah Smith State Park. Our bus driver had to thread our camel of a bus through the eye of a needle to get us back to the picnic ground. Lynn said that when they first started coming here they took meticulous measurements to ensure that the bus could in fact fit. Even so it took some earnest conversations with the park rangers to make the attempt. Robert did a great job!

We were warned about venturing away from the picnic ground because of the danger from bears and other wildlife. We were also admonished not to leave so much as a crumb on the picnic tables lest it attract bears.

We enjoyed the picnic lunches on the trip.

Jedediah Smith is one of the most famous Americans you never heard of.

We made it to the Oregon Caves Chateau in time for our scheduled hike through the cave. The Chateau is itself worth a diversion off (WELL off!) the beaten track. It was built by the CCC in 1937 and has been minimally updated since then. Our room was on the top floor (no elevator) and looked out toward where I am standing. It was quite comfortable in spite of the lack of air conditioning and the recent heat wave.

Since there is no cell service, no wifi, and only intermittent land line service, people are forced to interact and talk with each other! This is something that Road Scholars usually do as a matter of course, but I expect it can be a shock to the system for many visitors.

You can't see it in this picture, but the outside of the building is covered in tree bark for an unusual rustic look.

The tour of the Oregon Caves was the most strenuous exploration of the trip. Not all of our companions elected to take it on. I hope this will give some of them a flavor of what was there. There is also a Powerpoint virtual tour on the Oregon Caves website. (The PDF version was not working at the time of my visit.)

Before leading us into the cave, the ranger did a quick demonstration on the differing effects of slightly acidic water dripping on limestone marble and basalt. Water passing through leaf litter and soil becomes acidic and will eventually etch a cave in limestone. Not, however, in basalt. The water fizzed and bubbled in the depression left by many such demonstrations.

Carol gave us an explanation of the geologic history of the Klamath Block, which was formed over many aeons by various terranes smooshing together (my personal technical term) and mixing up. Even Carol's wonderful teaching skills didn't make this quite intelligible to me, but I found a great map on the WWW that gives a graphic image of the complexity. Unlike many such maps it has notations for places we visited such as Eureka, Crescent City, and the Oregon Caves. 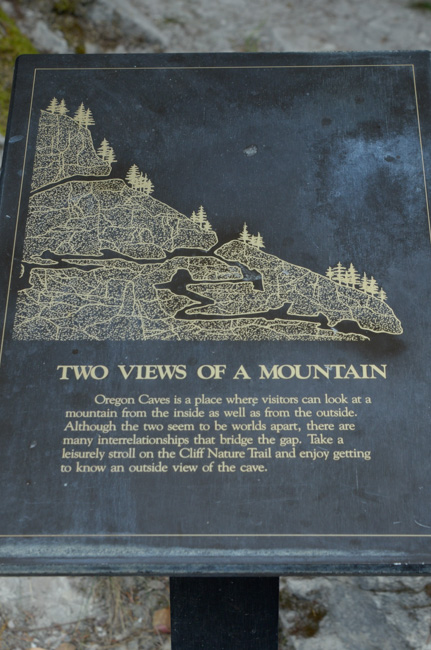 This sign was near the exit of the cave, but it gives a good representation of how the cave meanders inside the mountain. I wish they had marked which was the main entrance taken by the tours. It may have been the bottom one since there was an intermediate entrance/exit used by those who only took part of the tour, and the final exit was considerably higher than the entrance.

There appeared to be wonderful hiking trails on the "outside." It would be fun to spend more time at this fascinating place. 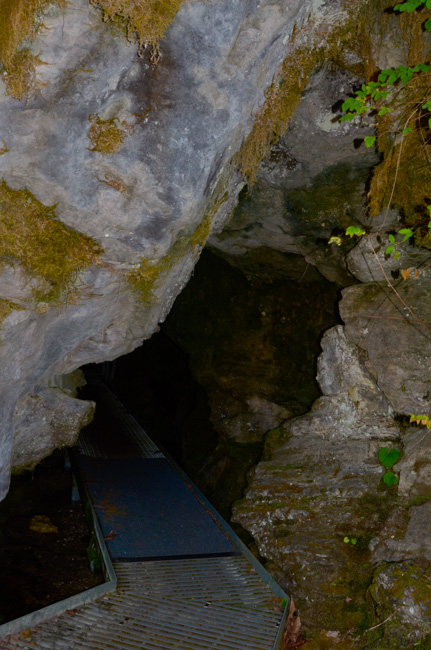 The entrance to the cave.

It was found by Elijah Davidson in 1874. He was intent on recovering his favorite hunting dog who had chased a bear into the darkness. It wasn't until some years later that he introduced friends to his discovery. Eventually word got out.

Connections between the various caverns have been enlarged over the years in order to enable an easier traverse. Even so there were places where we had to stoop in low passages or slither through narrow ones. We could easily see the difference as we passed sections of highly erodible limestone and erosion resistant basalt.

And then there were the stairs.

And the cold. The temperature was in the 40s throughout although we generally stayed comfortable with the exercise. 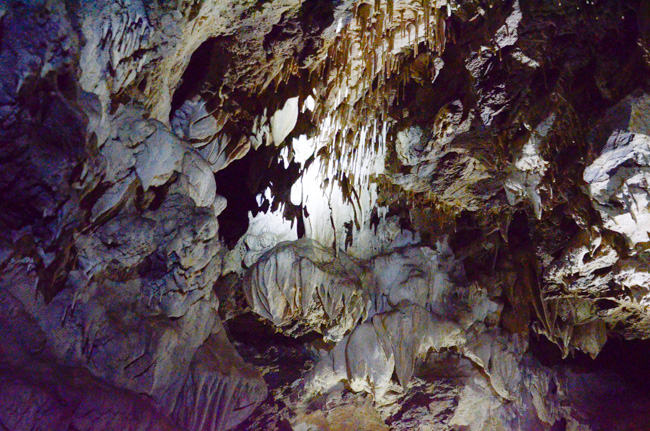 There were no grand caverns or large underground lakes such as may be found at Carlsbad, Luray or Mammoth Cave. The interest was in unusual formations. The atmospheric lighting helped with a mood of mystery.

The small hairy formations hanging from the ceiling are called "soda straws" for obvious reasons, but I liked the cabbage-like formations best.

Occasionally we would come to spaces where the roots of Douglas fir trees had grown down into the open space. 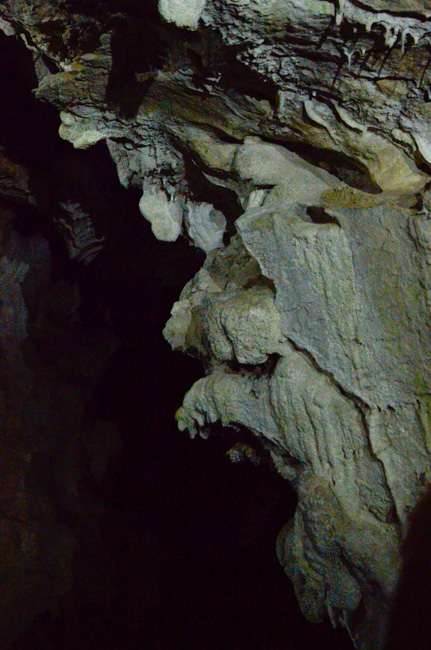 We visited one room called the "imagination room" where we were invited to use our imaginations to name various formations. There was an angel, for example, and many others.

The one that grabbed me was this giant gargoyle face. Pretty scary! 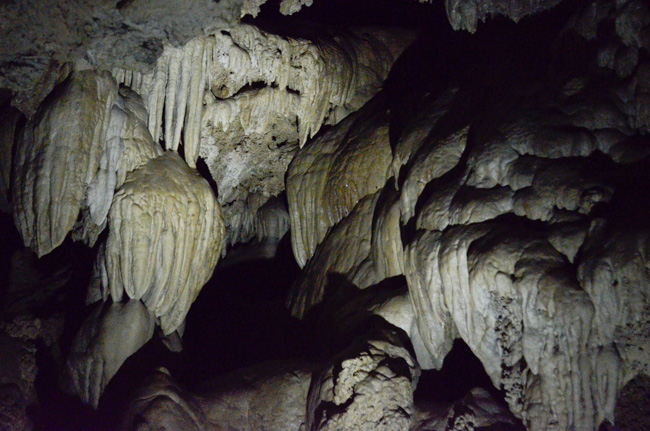 I don't know if every cave has a formation called "Frozen Niagara," but I've seen at least one other in addition to this one. Aeons of water dripping down the sides of a cavern produce these flowing formations. 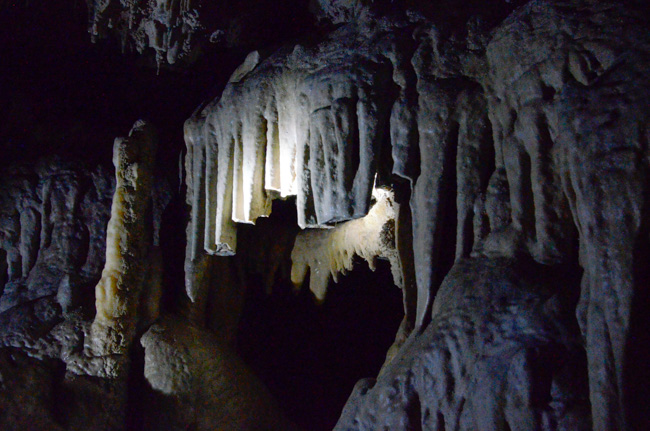 In several places we saw stalactites that had been broken off by previous visitors -- presumably long ago. They are starting to regrow, but it is a long slow process. If trees and forests have a life cycle that we humans can hardly understand or respect, how can we comprehend rocks!?

There was another place where an early visitor had inscribed (in pencil) a plea to preserve the cave! During a recent clean-up project, workers attempted to erase the message only to find out that a film of clear mineral deposits had formed over it. The writing was becoming part of the cave!

Did I mention the stairs?

This was the best view I could capture of the various stairs -- some steeper and more cramped than others. There was also a spiral stair. Many of the staircases were the metal constructions with railings as seen in the background. I rejoiced when I saw these! Many others were rough-hewn, uneven and slippery like the ones in the foreground. Since hiking poles were not permitted in the cave, it was a challenge to the tottery.

We were admonished not to touch the rocks as a balance aid because the oil from our hands could encourage bacteria or other organisms to grow. I confess that I used my elbows from time to time.

I forget the total number of steps although we were reminded many times, but it was multiple 100s. 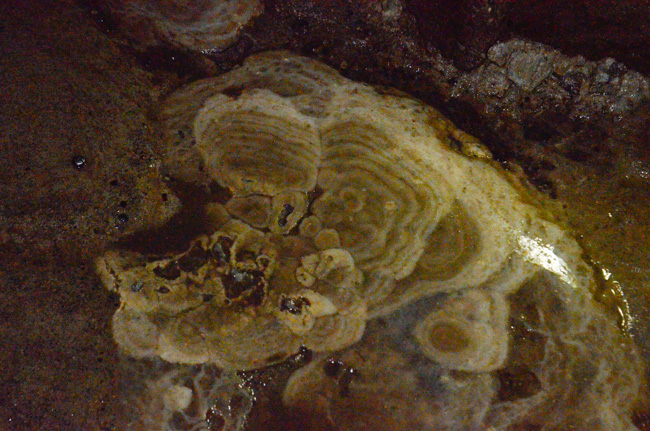 At one location we could see the cross-section of a stalagmite. This had been removed to make way for stairs to "Paradise Lost." Fascinating.

This was an optional excursion called Paradise Lost. It was well worth the additional however-many steps to see it. I tried not to use my flash much because it could annoy fellow cavers, but I did here after asking permission. There just wasn't enough light otherwise.

The other reason for not using a flash in the cave was the danger of disturbing any roosting bats. Unfortunately we didn't see any bats. 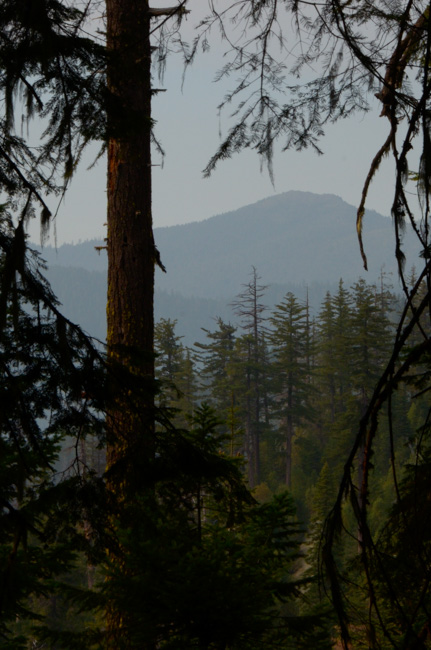 After a delightful time spent underground, it was nice to come out of the cave and revisit the great outdoors. I was never in a space where I could get a picture of the spectacular valley we had ascended to reach the caves. It was yet another spot where we really appreciated our fine bus driver, Robert. He negotiated the blind hairpin turns with aplomb.