It's been hard to select the most descriptive pictures for each day of our journey. Most of the time we spent in the California "pre-trip" were just catching up with friends, so not so many general interest pictures. The Oregon portion, on the other hand, was jam-packed with sights and experiences. 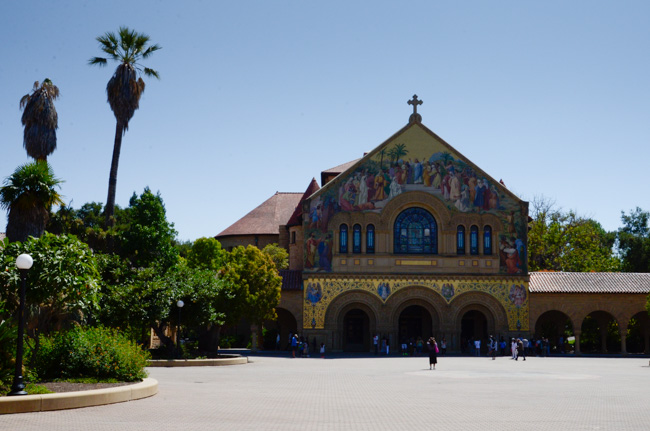 After a VERY early flight from Dulles to SFO, the rest of the day was focused on staying awake!

We accomplished this by visiting Stanford University. We walked around campus visiting places that Jim remembered from his studies there and a few new ones.

Jim was disappointed that the Stanford Alumni Association office would be open since we have enjoyed so many of their trips and he wanted to say hello. Nevertheless we had a great visit to the campus -- and stayed awake.

Memorial Church was also not open for visitation on Saturdays. See Wikipedia for its history and interior pictures. 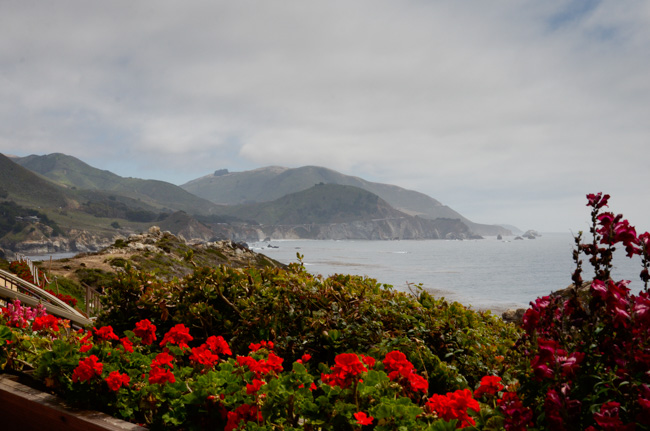 On Monday we joined a friend for a day of wine tasting in Carmel Valley. Lunch at the Rocky Point Restaurant between Carmel-by-the-Sea and Big Sur gave us a preview of the even more dramatic Oregon coastline.

In May 2017 a massive landslide buried the highway between our current location and Big Sur. The Coast Highway was closed until July, 2018. 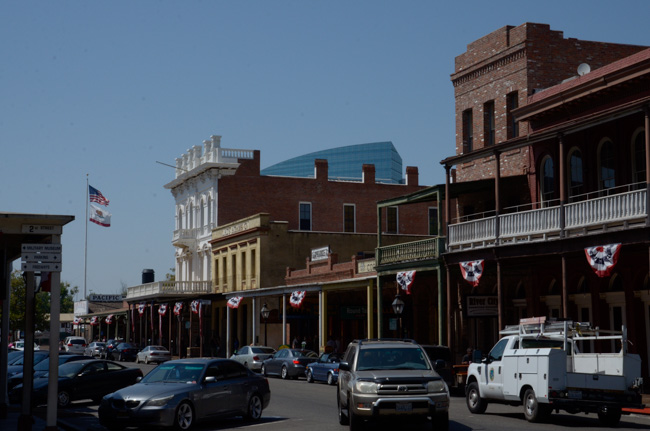 On our last day in California, we drove to Sacramento to meet my college roommate Kathy and her husband Larry. We had a delightful afternoon visiting the Crocker Art Museum, Old Sacramento, shown here, and dining in Winters at the Buckhorn Steakhouse.

After dinner Kathy and Larry dropped us by the train station for our trip to Portland. The train was posted on time. That changed. Dramatically.

Picking up a pair of private rail cards in Walnut Creek first delayed the train. Then a freight hit a car trying to beat it across the tracks. That delayed it even more. We finally crawled into our sleeper room at 2AM. One frequent traveler told us that the train was rarely on time. 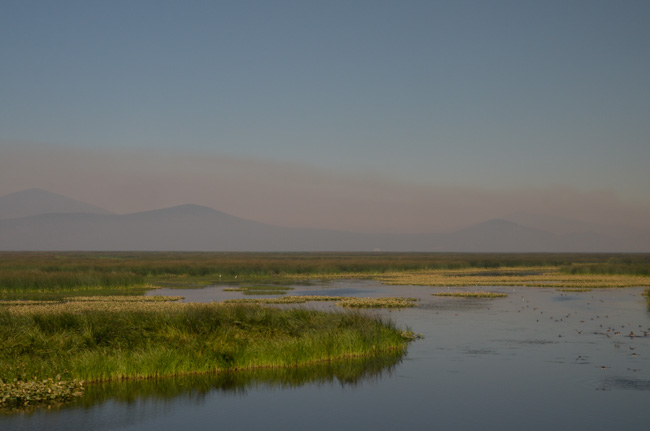 The train threaded the deep river valleys around Mt. Shasta before crossing into Oregon around noon. As we proceeded along the edge of Klamath Lake, we encountered heavy smoke from forest fires that would bedevil us throughout the trip.

Amtrak has the lowest priority on tracks owned by freight lines and by the time we reached Portland we were three hours late. We were thankful that we had elected to arrive the day prior to the start of our tour!

The following day we elected to visit the International Rose Test Garden. We had also planned to tour the Japanese Garden, but time ran short. We returned to the hotel in time to meet our leaders, Lynn & Carol Unger, and fellow travelers. 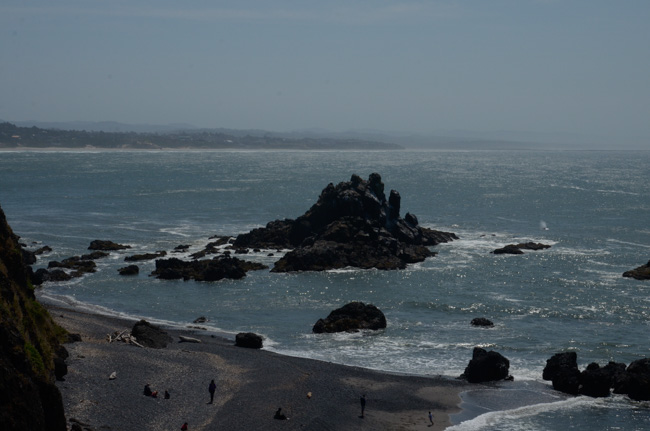 The next morning we arose early to meet bus & driver Robert. Our adventure was underway!

At many of our stops along the coast we saw grey whales. These are the rocks off the Yaquina Head Lighthouse. One is spouting just beyond the two small rocks on the right of this image.

Throughout the program we learned about the geology of the coast and mountain areas as well as the economy of the region. For more detailed information, see the day-by-day pages. 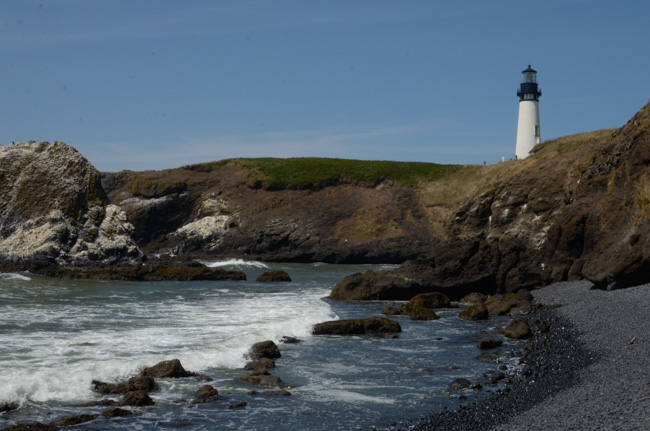 The Yaquina Head lighthouse from the beach. 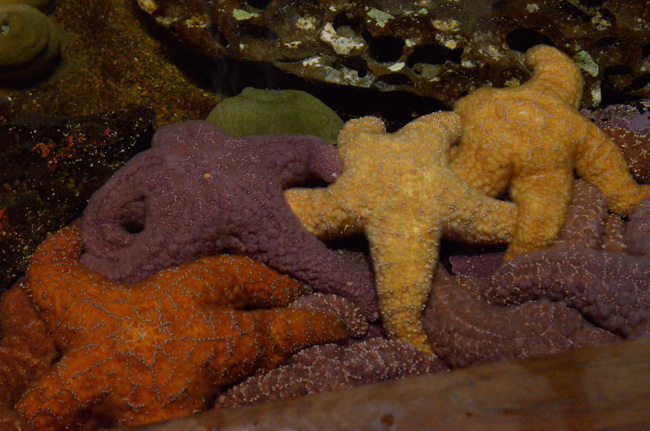 Another stop was the Oregon Coast Aquarium. Exhibits included these colorful starfish, birds and fish, and even a shallow tank where you could "pet" the exhibits -- carefully and respectfully of course. 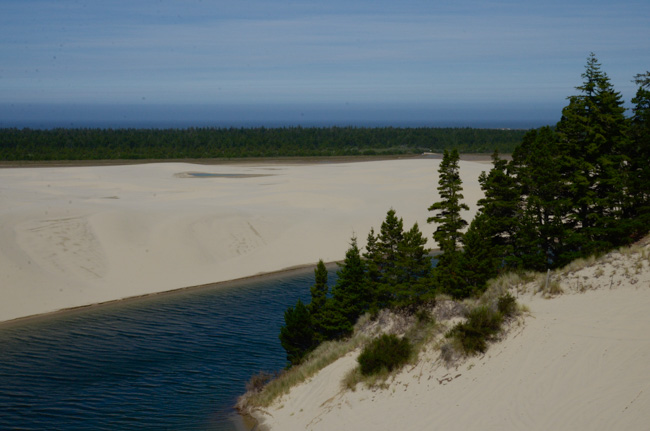 Florence is the north end of the Oregon dunes. This unique ecosystem has been drastically altered by imported European beach grass. It not only stabilized the dunes, as expected, it opened them to colonization by other vegetation including shrubs and trees that now separate the dunes from the shore.

Ironically, the only thing that has been found to keep the dunes open is ... dune buggies! 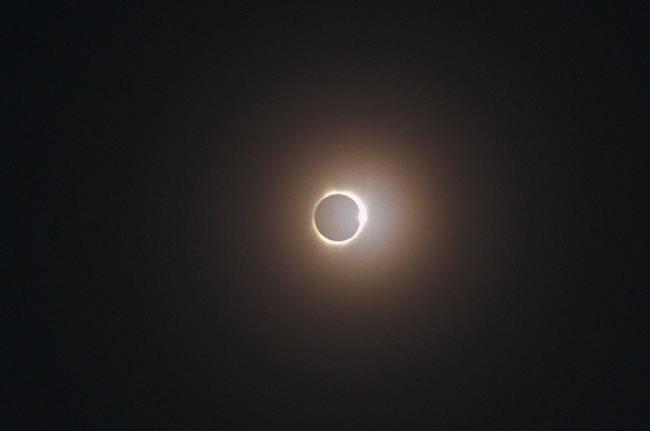 The highlight of the next day was, of course, the solar eclipse! We had no idea what to expect in terms of traffic, costal fog or anything else. The results exceeded our wildest dreams.

Once we discovered that the traffic gridlock had not materialized, our leaders sent out a scout to find a better viewing location than the one originally planned. We relocated to the Driftwood Beach park where campers relocated their tents to make room for our bus. What an experience! 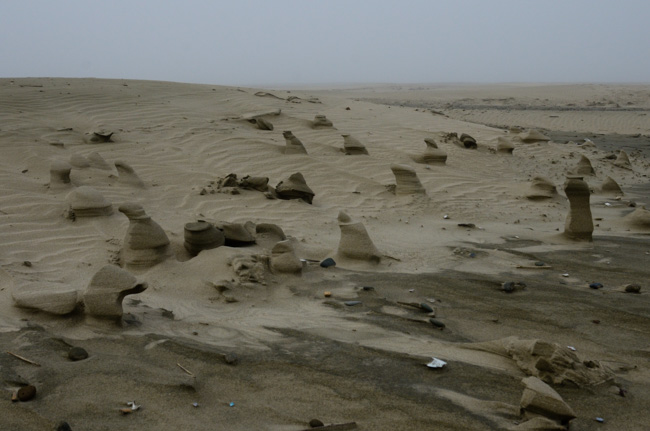 The eclipse wasn't the only attraction at this beach. The sand had been sculpted into extravagant shapes by the fierce winds that are common along the coast.

Now that the eclipse was checked off the bucket list, we returned to the regular itinerary for this popular program. 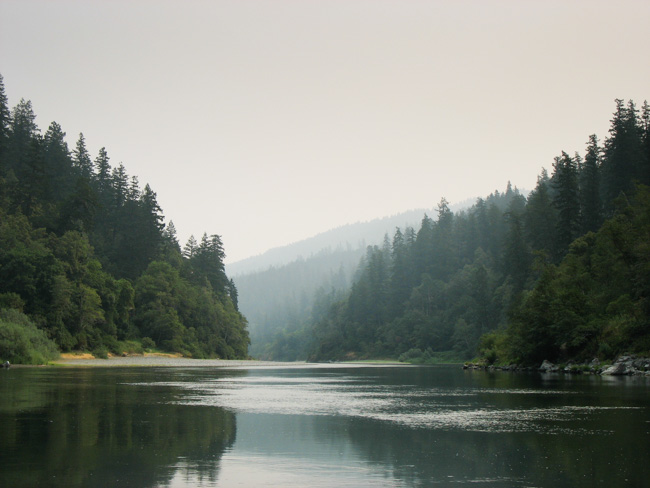 The next morning found us riding a jet boat along the Rogue River, which has its source near Crater Lake. The river was forested throughout and we saw wildlife galore: eagles, ospreys, herons, one very bold deer and one very shy black bear.

Our group had "good karma" for wildlife sightings!

We enjoyed lunch at Singing Springs on the bluffs above the river before returning to "port." On the way back our guide treated us to a couple of splashy 360° turns. Although Jim and I had carefully selected seats in the center of the boat, we didn't escape the spray. 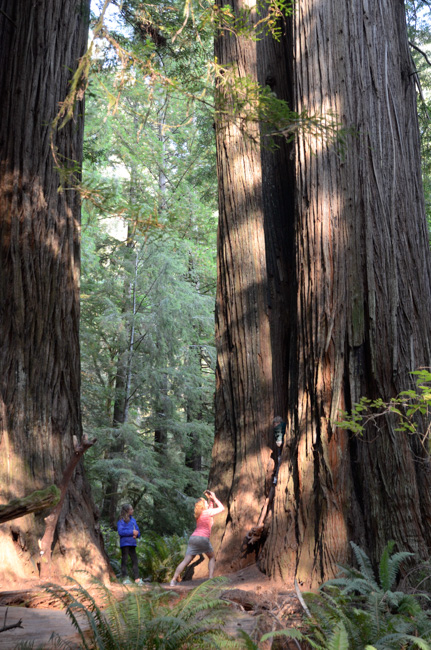 On our way to Eureka, California, we stopped at Prairie Creek Redwoods State Park to visit the Big Tree (only one of many!). Carol led us on a short hike through these magnificent trees. Many agreed that the redwoods were the most impressive part of the expedition (after the eclipse, of course). 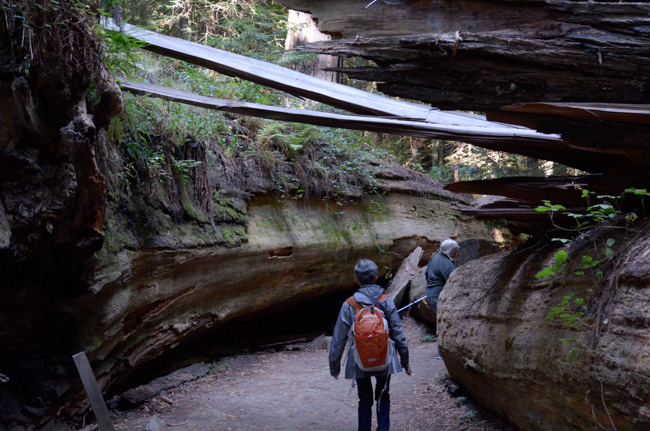 The following day brought us to more trees. We drove through the small town of Scotia, California, the "company town" owned by the Pacific Lumber Company. Jim and I had toured the lumber mill and museum many years ago when it was still processing old-growth trees.

We then proceeded to Humboldt Redwoods to see some more big trees. The massive trunk on the left is the remains of the Dyerville Giant, which may have been the tallest tree in the world before it fell in 1991.

After visiting the trees, we had free time in the city of Ferndale, which has an impressive collection of preserved Victorian-era buildings -- and some enticing shops -- before returning to Eureka for another night. 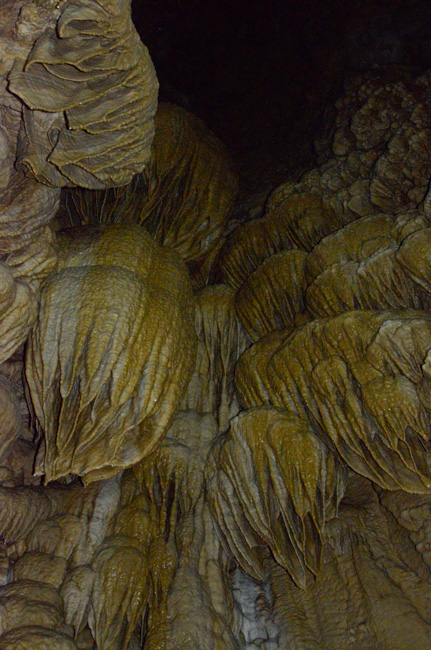 The following day we were back on the road for the Oregon Caves National Monument, but first we bade farewell to the Pacific coast at Crescent City and the redwoods at Jedidiah Smith State Park where we had a picnic lunch.

There was anxiety about road closures due to forest fires, but we made it to the caves without incident. The historic Oregon Caves Chateau was our favorite hotel of the entire trip -- even though it hasn't received much in the way of upgrades since it was built in the 1930s. No matter, our 3rd floor walkup un-air-conditioned room was quite comfortable.

The walk through the caves was the most strenuous exercise of the trip. I was delighted to purchase a National Parks Golden Age Pass before the price went up dramatically on the 1st of September.

It was a joy to be out of cell phone range and without wi-fi! Even the landline is iffy in this remote location. 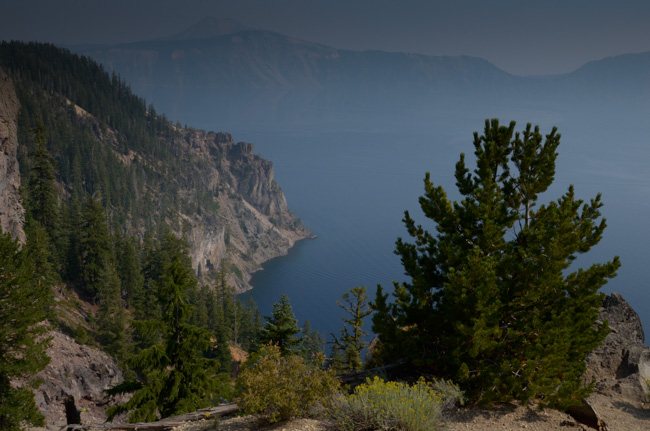 The highlight of the following day was Crater Lake. Again the fires caused some anxiety. Lynn and Carol said that their last group was unable to see the lake at all due to smoke. We didn't get the clearest possible view, but at least we could see across the lake.

Jim and I had visited Crater Lake twice before, both times in the winter. One time we could barely see across the parking lot due to fog so there was no chance of seeing the lake. The other time we were luckier and it was lovely in the snow. 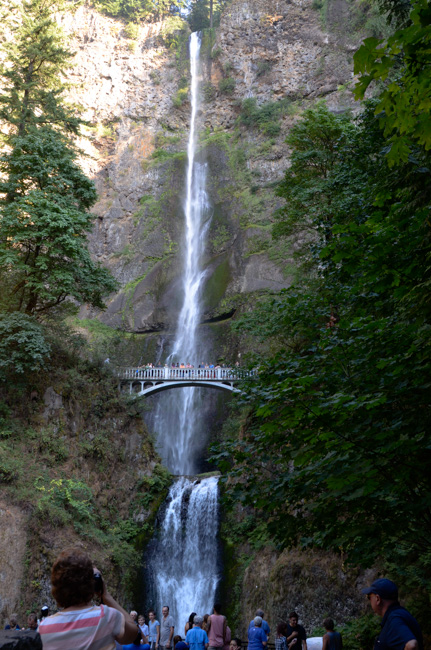 The final day of our tour included stops at Lava Lands, part of the Newberry National Volcanic Monument, the Warm Springs Indian Reservation, a Mt. Hood overlook, and Multnomah Falls.

Jim & I had visited all of these before, except Warm Springs, but the insights and background offered by our guides greatly enhanced our appreciation of what we were seeing.

Although we were eager to get home, we were sad to bid farewell to our companions. In addition to being a fine tour, it was a great group with excellent leadership. Good karma indeed! 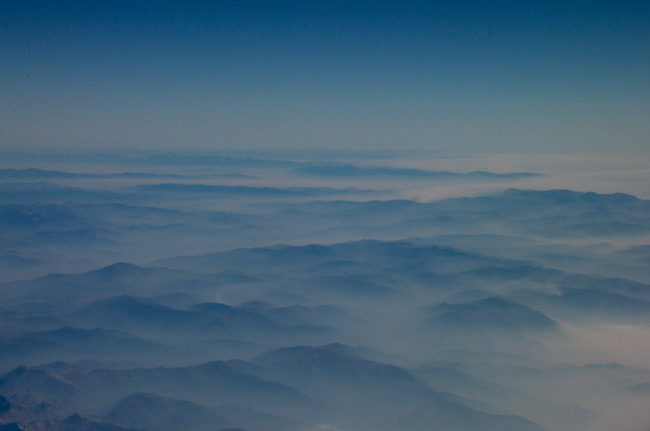 Our flight left early the next morning. This view of the fog and smoke in the mountains of eastern Oregon was a fitting farewell to a beautiful part of the country.

We arrived back at Dulles early enough to make the 3+ hour drive home that same day. It was a wonderful trip.

Check out more pictures and commentary on our daily journal.