I have wanted to visit Longwood Gardens since I first heard about it many years ago, but it isn't on the way to anywhere. When we were in Philadelphia in May we read that the fountains had been reopened. We tried to see if there was a way to reach the gardens using public transit, but there wasn't. So we resolved to visit when back for the High School reunion. Prior to leaving home we purchased tickets for the evening and arranged to stay the night nearby. 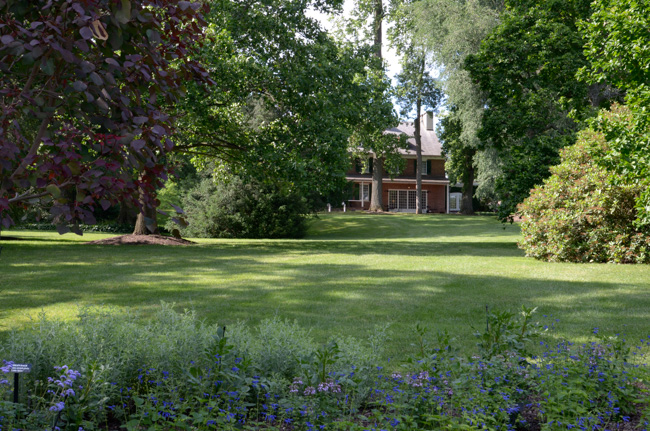 The land that is now Longwood Gardens was the site of an arboretum developed by the Peirce family. The portion of the house shown here was built by the family in 1730. In the mid-19th century the arboretum had one of the finest collection of trees in the US.

By the early 20th century, however, the property was neglected and the trees were to be sold for lumber. Pierre DuPont purchased the property solely to save the trees. He didn't stop there, however, and began to expand the gardens and the house.

Using his engineering knowledge he also designed fountains for his new gardens. 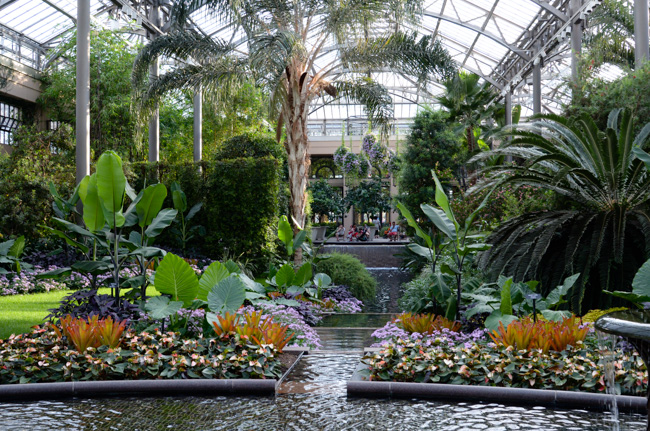 Unlike most wealthy men, Mr. DuPont was committed to making his gardens accessible to the public. His inspiration was a public greenhouse that he visited in Philadelphia as a young man.

The conservatory was opened in 1921.

One side of the building included a music room and a huge Aeolian pipe organ. There is a display area where you can see the actual pipes as well as exhibits on pipe organs in general. One of the primary organists who gives concerts on the organ is Peter Richard Conte. We met him after a performance on the Wanamaker Organ when we were in Philadelphia in May. 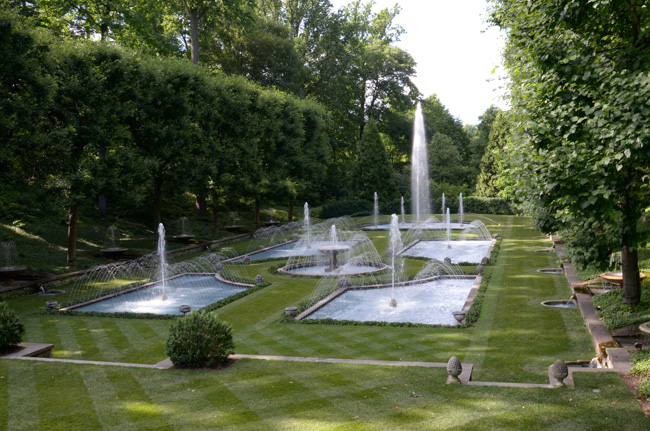 The Italian Water Garden was also constructed in the 1920s along with other water features including the main fountain garden in front of the conservatory.

One great feature of the gardens is that the plants were, on the whole, well labeled. Another great feature is that many of them were North American natives rather than exotics. Unfortunately, as I expected, my favorites do not seem to be available at commercial nurseries. Ah well. 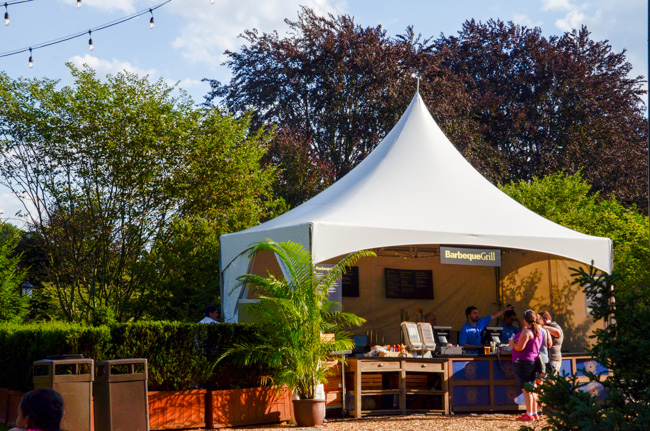 Our tickets admitted us at 4:00 and the fountain & light show was not scheduled to start until 9:15. We had plenty of time to visit the gardens and also to have supper. There are numerous eateries in the "beer garden" area of the gardens. We elected to dine at the Barbecue Grill. There is a much fancier restaurant, but it takes reservations and we felt it was probably sold out. Besides we had been stuffing ourselves at the reunion festivities and just weren't that hungry.

After supper we toured the conservatory and then nabbed good seats for the evening performance. Although it was over an hour before the time, we were tired and had a grand time people watching. There were local stands were we could get some ice cream, wine or beer. What more could we want? 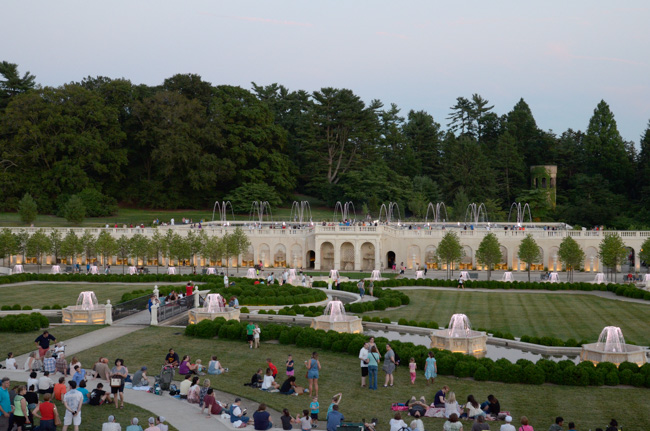 We had front-row seats and more-or-less comfortable chairs on the gallery overlooking the fountains. It reminded us of an afternoon spent overlooking the Djemaa el-Fna in Marrakesh. This was not as exotic, but it was enjoyable to see the crowds ebb and flow. We noted the large number of children and families. What a great way to spend a Saturday!

A couple of women sat next to us. One was a regular who had been coming 3-4 times a year for many years. She and her late husband made it a regular anniversary occasion. The friend with her had never been. She said that she hadn't really looked forward to it, but was blown away by the gardens. And that was before the lighted fountain show! 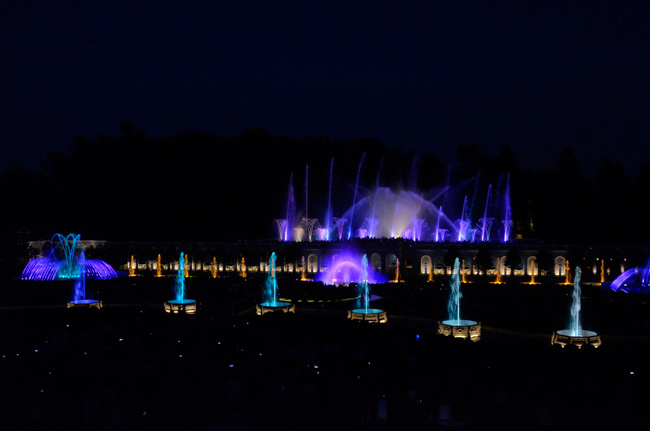 I took numerous pictures tracing the gathering of the crowds and MANY pictures of the fountain light show. I'll just show a few.

The musical theme for the night we were there was "swing." It isn't our favorite style of music, but .... There is an upcoming program, including fireworks, over Labor Day featuring Mussorgsky's Pictures at an Exhibition and Night on Bald Mountain. Jim is drooling over it, but the reserved seating is already sold out. 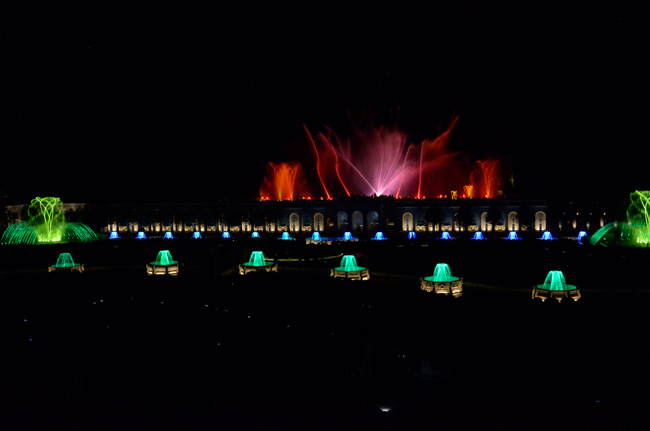 The original fountains and lights were meticulously designed and custom made by Mr. DuPont. The control board was manually operated and it wasn't possible to reproduce any particular effect reliably. Since the recent restoration, the fountains and lights are controlled by computers once the program is designed. We visited a display in the afternoon that described the process of defining what effects to be used to highlight the music.

One of the gee-whiz features recently added to the fountains is the ability to "float fire" on the top of a fountain jet. There was a display on how that is done, but I've forgotten the details. There was a chorus of "ooh-aah" every time the flames appeared. 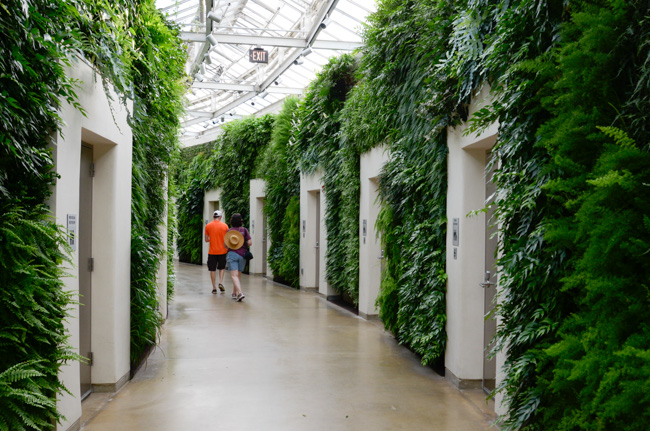 This picture was taken earlier in the day, but this was our last stop before leaving Longwood -- the "green wall" restrooms. When we entered the gardens earlier in the day, the docent who explained how to get around and see everything most efficiently said this was a "must see."

It was certainly unique!

Getting out of the parking lot after the performance reminded us of Wolf Trap. There were many cars and only one exit road. Nevertheless everything moved along smoothly. Unfortunately the directions we had printed from the hotel web site had us turn the wrong way out of the parking lot so it took a bit of time before we realized the error and retraced our path. We were glad we had taken the time for that privy stop before leaving!

We plan to visit Longwood Gardens again. Maybe next time we'll include Winterthur as well.