The following morning many of us gathered at the Pottstown High School for a tour of the facility, which has been significantly expanded since Jim was a student. The tour included a visit to the new Alumni Gallery. 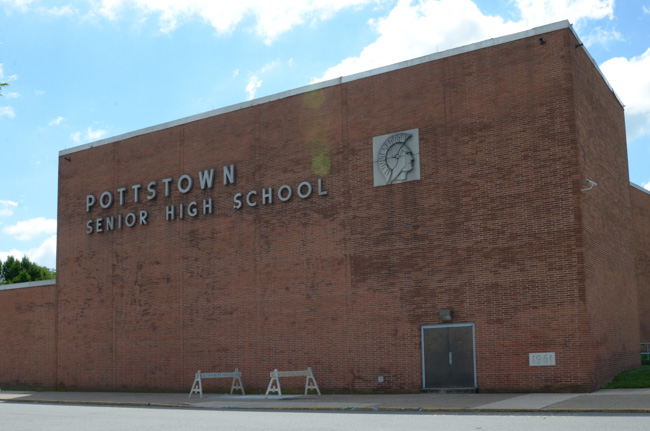 The school was constructed in 1961. Jim's was the second class to graduate from this facility.

The sports teams are called the Trojans. I spent a year at USC, which also calls its team the Trojans. I don't know why no one seems to remember that ultimately the Trojans lost and were annihilated! I can't say that I've ever heard of a team called the Greeks, however. 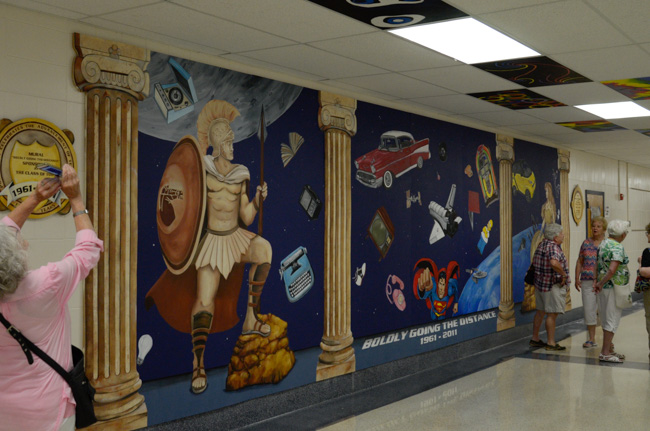 This recent mural was sponsored by the class of 1961, the first class to graduate from this facility. The illustrations depict transition from items that were current in the 60s to those found nowadays, such as Homer Simpson! I loved the "antique" portable record player in the upper left. I had one of those babies!

Since Jim (and many others) had last visited, there has been an addition containing, among other things, a huge gymnasium. Our tour leader explained that the size was dictated by a desire to have a space big enough for a variety of community activities. On the day of our visit, it was crowded with students participating in athletic "skills drills." 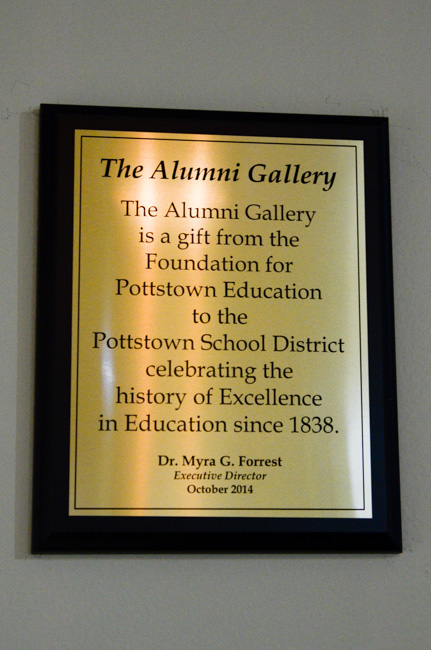 In the "small world" category, Jim and I had met Dr. Forrest at the Drexel reunion. Her husband is an alumnus. She was delighted to meet a Pottstown grad.

As our tour visited the school library, which occupies part of what had been the old gym, we had a time for questions. Our presenter, John Armato, described the many changes that had been made to education since 1972. Some of them, such as significantly reduced funding, are mentioned in the article about Dr. Forrest at the link above. Others, also mentioned, are unequivocally beneficial, such as the ability to earn college credit or even take college courses for free during the high school years.

Change is inevitable. We can hope that changes lead to improvements in the long run.

It was an interesting tour. 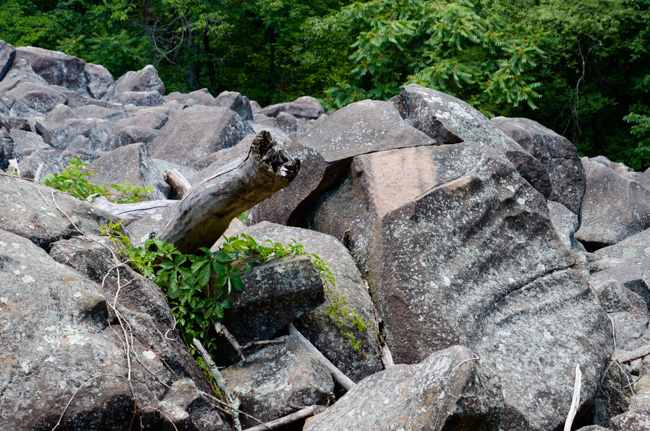 Our final activity of the reunion was a cookout at Ringing Rocks Park. Jim says that he lost numerous hammers here before his father forbade him to take any more. There is a roller rink at the park as well as a couple of picnic pavilions.

We didn't think to bring a hammer to try to play a tune. There is some sample ringing on YouTube.

There has been limited scientific investigation of the ringing rocks phenomenon, which is found in numerous places. No one knows why they ring.

After lunch we bade farewell to old friends. We had made arrangements to visit Longwood Gardens and needed to get on the road.