Although the first couple of days of our trip were snowy white-out conditions, the final days were full of glorious sun! As usual I didn't take a camera every day, and I discovered that it was virtually impossible to take cell phone pictures in the bright light. 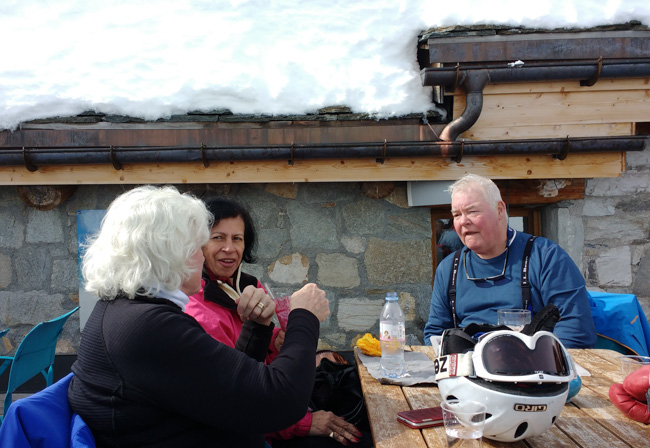 For the two days after the snow ended, a group of us engaged a guide to show us around the vast area. I was glad to get a chance to practice the improved techniques I had learned while taking a couple of lessons at Snowmass. They worked!

The first day we were Alice, Blanca, Inge, Jill, John, Liz, Royce and myself with guide Bruno. We covered the Bellevarde Sector The second day we lost Liz and Royce and had guide Karl for the Solaise Sector

After a morning of skiing at Solaise, Alice (back to camera), Blanca and John are enjoying the sunshine. 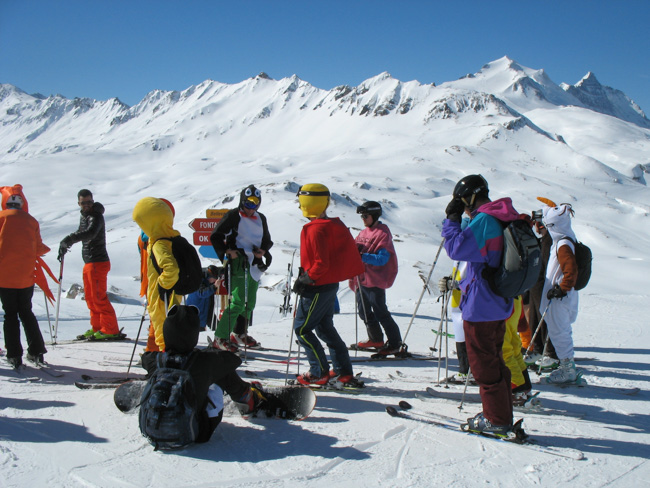 On the 3rd day I went with Gwen, Kay & Liz to the Tignes (pronounced more-or-less TEEN-nya) area. I'm happy to report that the access to Tignes has been GREATLY improved since we were last in Val d'Isère!

"Crazy Brits" specialized in funky costumes. This batch, with tiger, canary, penguin and other silly garb, were restrained compared to some. My favorites were the get-ups that looked like, for example, a man riding a horse ... or a monkey riding a tiger. I guess you had to be there, but I didn't have a camera on the day we saw them.

One of our group, Amy, actually lives in London. She told us that folks spend months preparing their "themed" costumes. 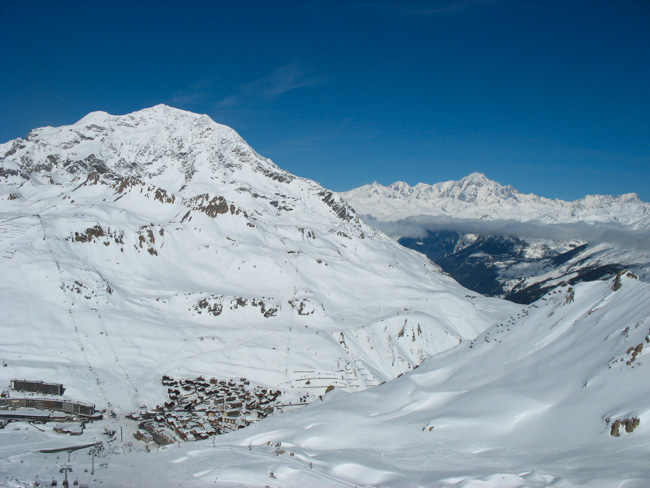 Looking into one of the Tignes villages from Toviere. 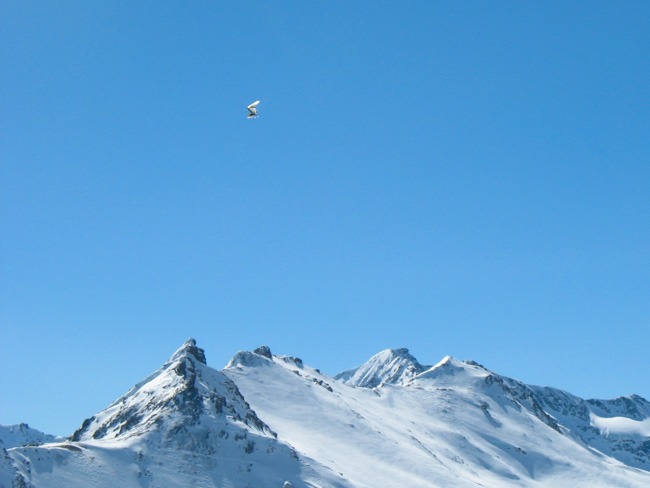 A motorized microlight buzzed high above the peaks. Concessions would take you for a ride in one of these little craft for something like 100 € for 15 minutes. I call that 15 minutes too long. 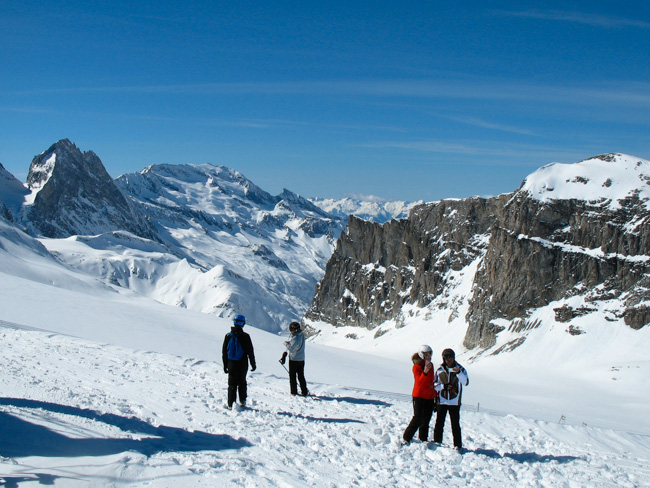 The lifts to the top of La Grande Motte had been closed all week due to high winds and avalanche danger, but today it was possible to take the underground funicular most of the way to the top. This is the view down into the next valley over from Tignes. 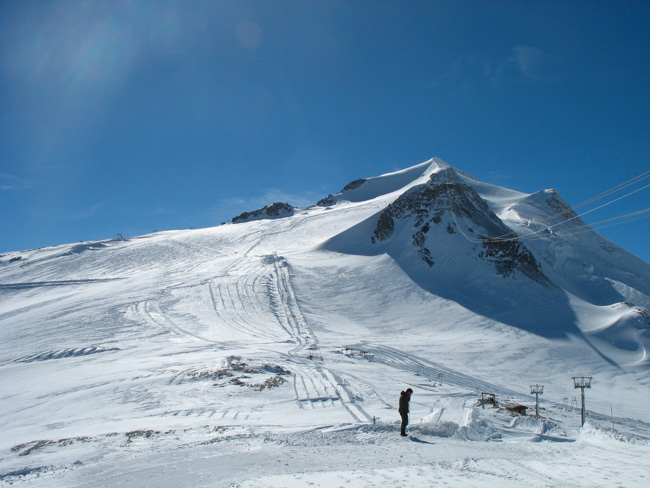 A longing look at the peak. This was the one area that I had not yet skied in Espace Killy and I was disappointed to be so close, yet so far.

The cable car was open the following day, but by then I had other plans. Oh well, next time.... 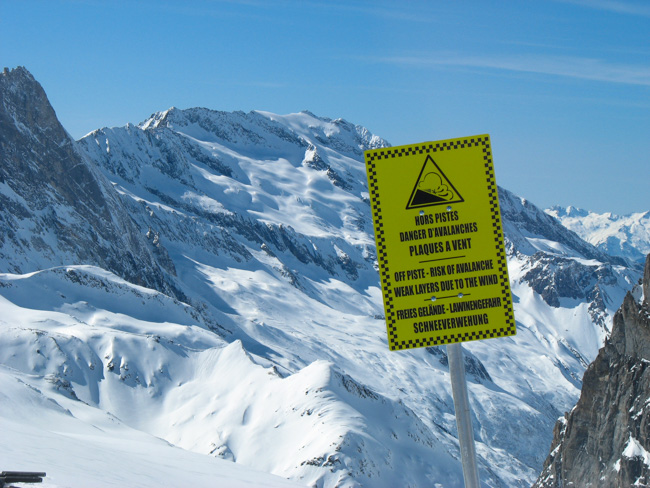 Avalanches are always a danger in these mountains and never so much as the days following heavy snow. During the time that we were there, an avalanche swept across a popular blue run not far from here, but no one was injured. It is rare for an avalanche to strike one of the marked pistes. Usually they affect the off-piste areas.

On a previous trip to Val d'Isère, an avalanche killed a guide and several others in an off-piste area within view of one of the chair lifts. It made for a sobering ride up the mountain to see helicopters and rescue dogs searching for survivors. 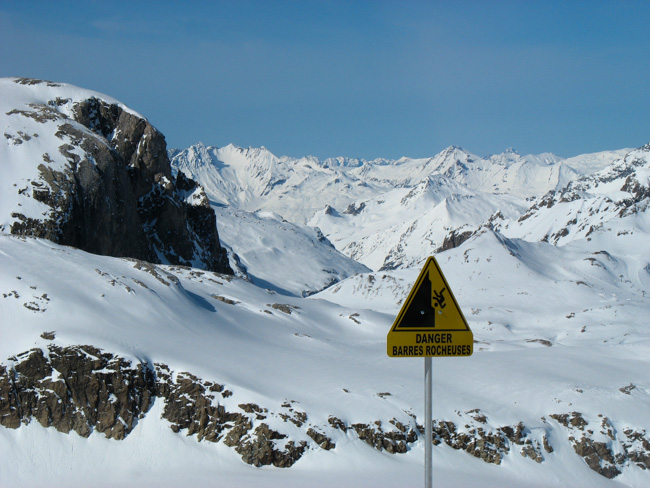 Alpine resorts always tempt skiers off-piste. Some places are marked, as in this case where a cliff is not obvious from the trail. Others are not. One of our guides, who had been showing us skiers indulging in the new sport of speed riding, warned us about following ski tracks down an unfamiliar slope. Skiers who are using a "speed wing" may be headed for a cliff on purpose. An unsuspecting skier not so equipped would be in for a nasty surprise. 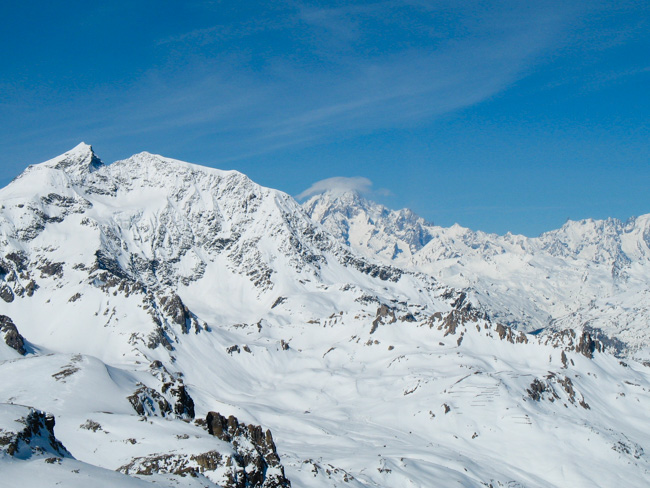 Mont Blanc may qualify as the highest mountain in Europe, depending on where the European border is defined to be. There is no universally accepted designation, but if the Caucasus is included as part of Europe, Mt. Elbrus is considerably higher.

To get an idea of the clarity of the atmosphere, Mont Blanc is over 50 miles away from where we are -- as the crow flies. 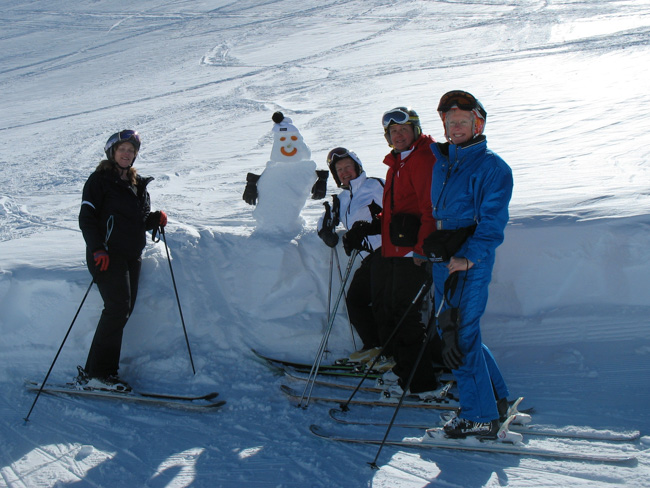 As we skied down, we stopped to admire this jolly little snowman. A young French woman had decorated him with her hat and gloves. We took several pictures for her and she returned the favor. L-R: Gwen, Kay, Liz & myself. Cara had skied past the snowman and didn't choose to climb back up for the picture. 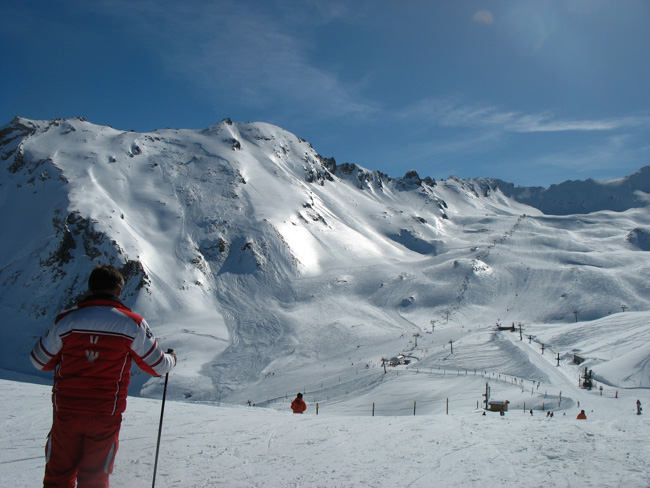 On the way to Val d'Isère from Tignes. The freeze/thaw cycle has glazed the snow to the left of the pistes.

Note the avalanche scar just to the right of the ski instructor! It almost reached the piste! 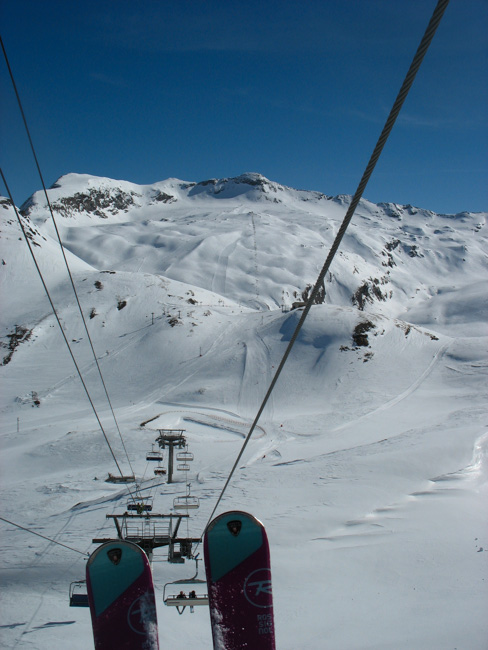 The following day I headed out on my own to take pictures of places that I had visited earlier in the week without my camera.

The Glacier du Pisaillas is in the background. I'm riding an unusual lift that goes up and over a ridge then down into the valley beyond. It's fun to ride with someone who has never done it before and hear their gasps as you come over the ridge.

Since my skis are so old, I have been renting skis for the past couple of years. This particular pair worked great in the powder snow early in the week and also in the mashed potatoes, but not so well on the hardpack. Next year I hope to spend a week demoing skis in Snowmass with an idea to replacing my current ones (I did -- love my Black Pearls). On the other hand, it's pretty convenient not to lug skis through airports and always have access to the latest equipment. 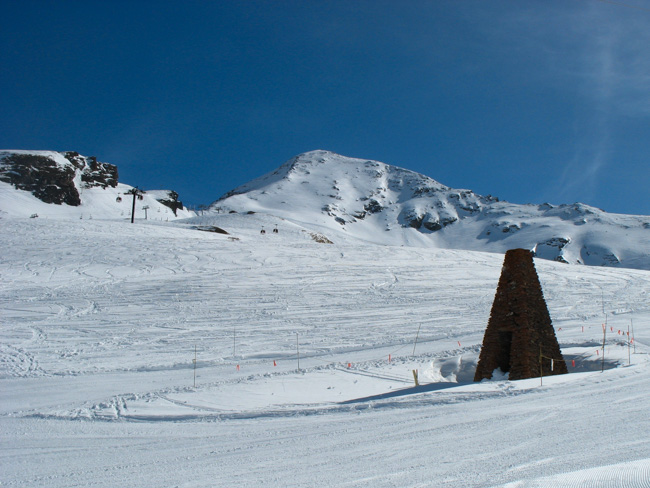 This monument is supposed to mark Hannibal's route through the Alps with his elephants. One of our guides asserted that in fact elephant bones had been found to corroborate the tradition. Maybe. There is controversy over the actual route. (Spoiler alert! The "southern" route favored at the link does NOT go through Val d'Isère!) The elephant bones were documented in the 18th century near the Little St. Bernard pass. No one in modern times has, however, actually seen the alleged bones!

Our guide said that the monument had a practical benefit. Anyone caught in a blizzard can shelter within the niche at its base. 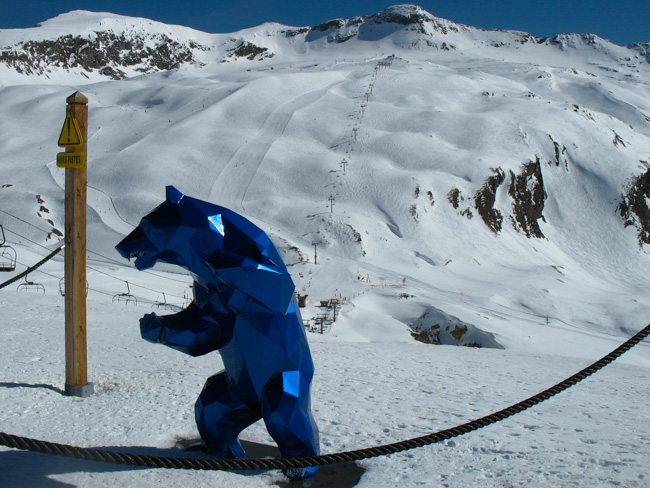 At the top of the Vallon gondola was another of the sculptures like our hotel's pink panther. Similar sculptures were for sale in an art gallery downtown. Even if they hadn't been outrageously expensive, they would have been hard to pack! This bear was more-or-less life size.

There was such a variety of lifts at Val d'Isère: télécabine (gondola), funicular, chair (4,6 & 8 person), téléphérique (tram), etc. After riding two funiculars, two rope tows, one "magic carpet" (in a tunnel, no less), at least two gondolas, a téléphérique, and a variety of chairs, I decided I should ride at least one of each possible type at least once. Until I got to the T-bar on the glacier. I draw the line at T-bars!

At the base of the glacier I found a Poma or "button" lift. I hadn't been able to persuade any of my skiing partners to ride one of these, but since I was skiing alone today I was free as a bird! The run down to the Poma was rated green, but it was a delightful swoopy swervy run. Twenty years ago I would have been seeking some big air on it, but even so it was fun. There was actually an attendant at the base of the lift who handed me my "button" and sent me on my way up! 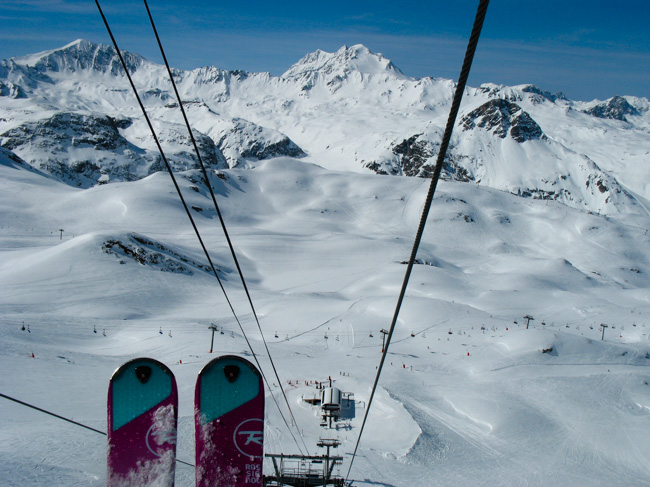 After getting the pictures I wanted, it was up and over on my way back to Val d'Isère. I'm gliding down to the Solaise area with La Grande Motte in the background. The tram up to the top of La Grande Motte was open today, but I didn't feel inclined to work my way over there just to check a box. I heard later that the line was really long and slow so I didn't regret my decision.

I had taken the run down to the village earlier in the week. It was crowded and slushy so today I opted for the gondola down. The village is spread down the valley with the lake and large dam in the background.

The original village of Tignes was submerged by the lake collected behind the dam. Every so often the lake is drained for maintenance and it is possible to visit the location of the village.