After our visit to the Bedouin, we proceeded to the Desert Nights Camp where we spent the night among the dunes. 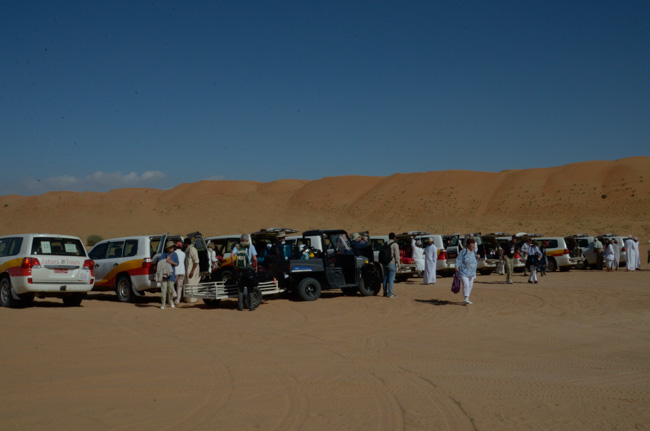 Our motorcade looks pretty impressive ranged in front of the camp. 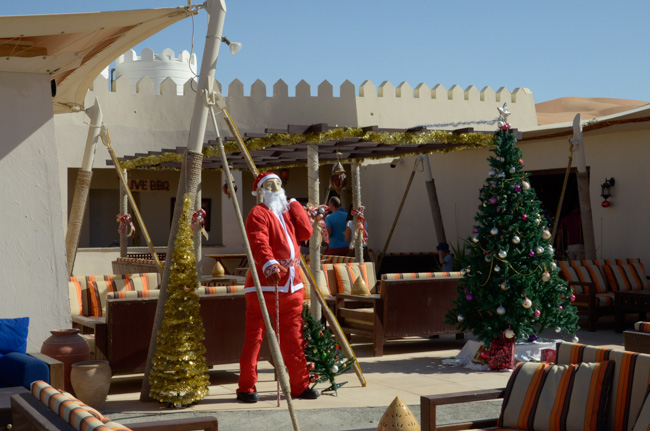 We were surprised to be met by this Christmas display in the "lobby" of the camp. Even though the area is officially Muslim throughout, we did see the occasional Christmas tree, although this was the only Santa. I don't recall seeing any crèches. 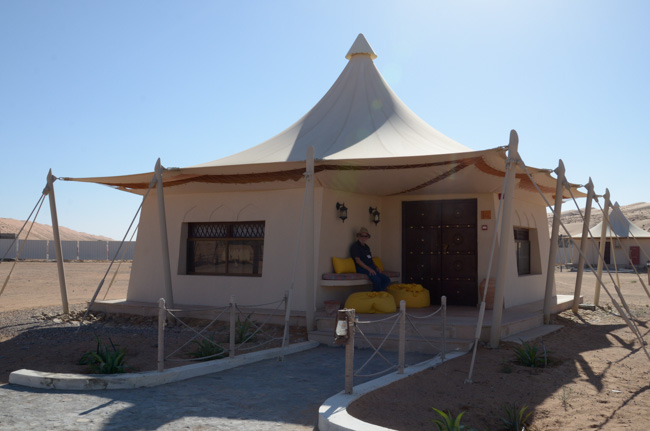 Each couple had their own "tent" for the night. The designs were really quite clever and the accommodations were comfortable. Our tent had separate air conditioned living and bedrooms plus a large bathroom.

The "porch" was comfortably furnished with a bench "sofa" and some beanbag seats. As it happens we arrived on the eve of the Muhammad's birthday holiday. At sunset the camp's bar would be closed and there was no wine allowed at dinner. We were able to buy a bottle of wine for private consumption within our tent. We cheated and sipped on the porch after dark. One of our fellow travelers enjoyed our contraband with us.

As is so often the case, the birthday celebration is a bone of contention among the various Islamic sects. Even within Oman I found two separate days set aside for the celebration: December 12, which is the day we experienced, and December 24. 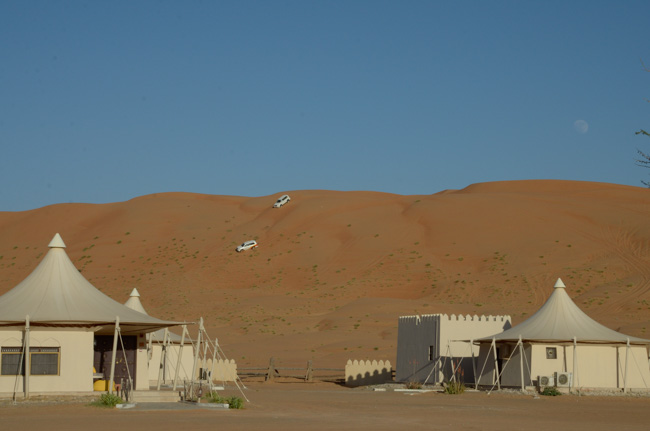 After unloading all our baggage, the drivers took off into the dunes to hone their "bashing" skills. We watched a couple of them horsing around. One got stuck for a brief period, but eventually got going again. 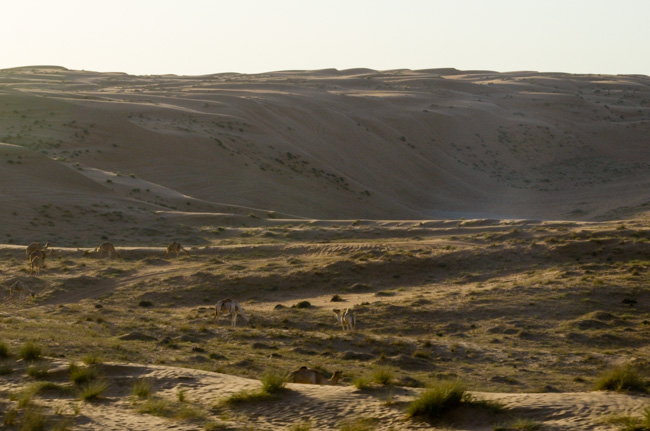 One of the activities at the camp was traveling into the dunes to watch the sunset. Jim and I rode in our new car, #12, and were joined by the couple who had taken our place in #5 with Mikey. They thought he was a terrible driver, which he was not, and refused to ride with him again. They were also uninterested in dune bashing this afternoon, so we had a pretty staid trip to the observation site.

On the way we passed this group of camels grazing the desert vegetation. Before leaving on this trip one of the suggested readings was the book Arabian Sands by Wilfred Thesiger. He described how the Bedouin found grazing lands in the empty desert by remembering brief isolated rain storms of weeks or months before. They would return to find that grass had sprouted and could be used to feed the camels. Such places must have looked like this.

One of the chapters in the book was on the Wahiba Sands. 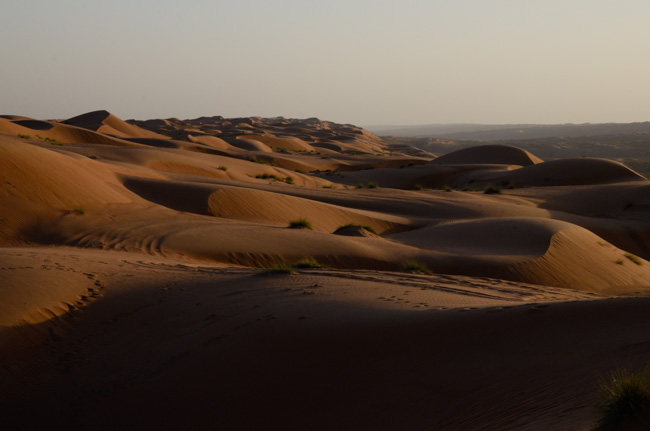 The dunes were lovely and made of a very fine reddish sand.

Most of us tourists preferred to wander along the dunes, but most of our drivers immediately departed to "dune bash" to their hearts' content. There were few places among the dunes that didn't have car tracks. 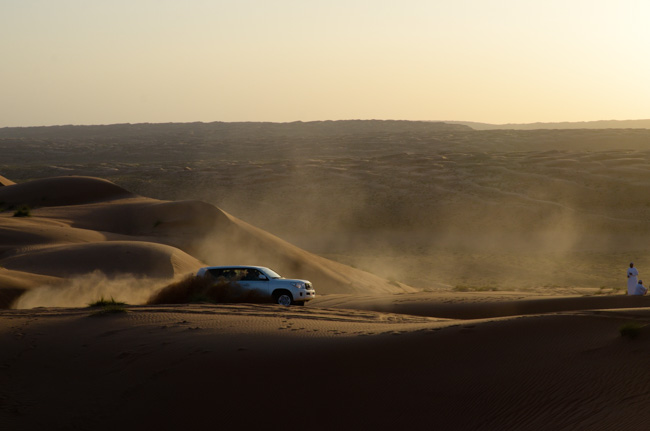 At one point I was walking along the crest of a dune when I heard shouts. I looked up and the drivers standing on another dune were waving at me. I finally realized that they were warning me to get out of the way because one of the cars was coming in for a landing! I finally scrambled in the correct way to get out of danger. The "basher" was not able to see as he crested the dune, so I really was at risk.

Here is another one coming in. 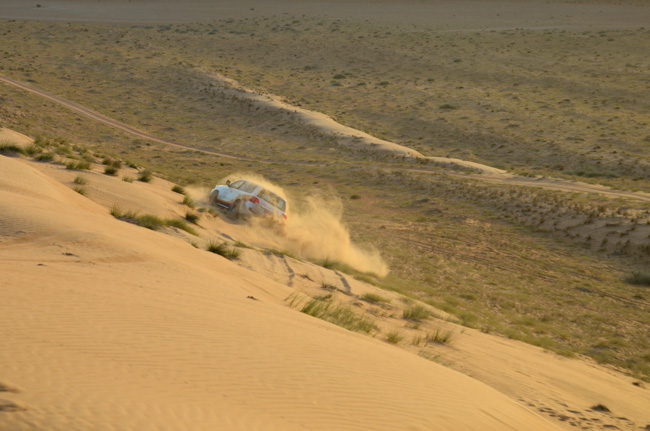 Another driver taking his vehicle to the limit. These were incredibly stable vehicles. 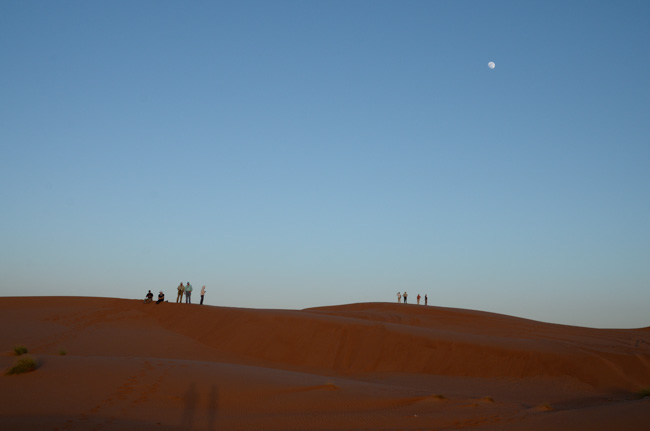 Our sunset watchers scattered far and wide over the dunes.

Our drivers and tour leaders. They seemed a happy group. Mikey, our #5 driver, said that during the off season they even go on vacations together -- often to Europe, sometimes to southeast Asia.

The driver of the #6 car was new. The others seemed dedicated to teaching him the ropes (and razzing him for his mistakes). I hope he eventually makes it a success. 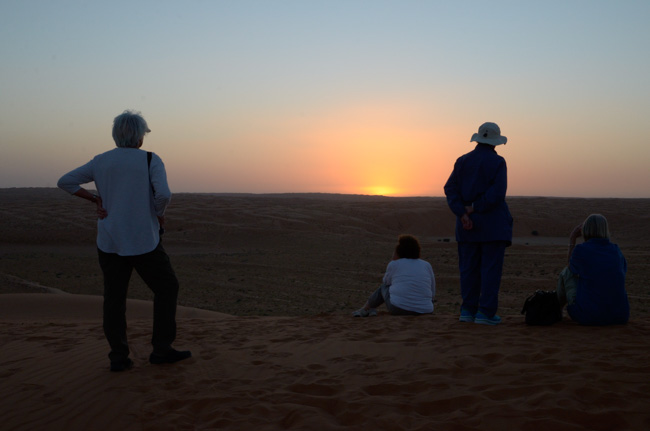 The cloudless desert sky didn't provide all of the rich colors we are used to in more temperate regions, but it was a magnificent sight none the less.

I heard that the sunrise was also pretty spectacular, but I didn't get up early to see it.

This was the last night our group spent together. Some would be leaving very early in the morning for the airport so we said goodbye in the evening.