After the goat market we were back into motorcade to visit some of the surrounding area before heading into the mountains. 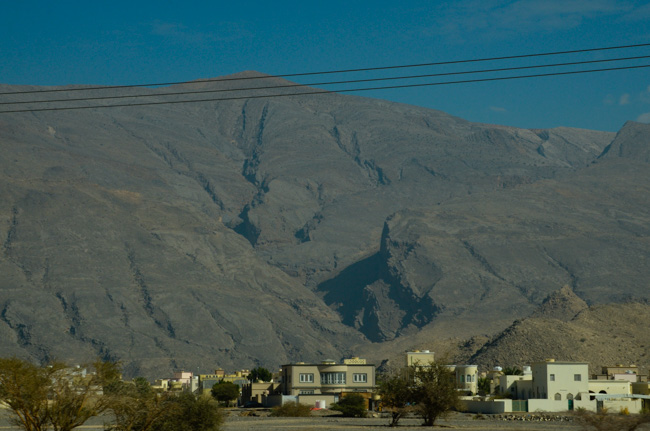 Although the mountains are arid, whenever it does rain the runoff is channeled into deep canyons that lead down to the plain. At the base of every such system is a village that captures the water and uses it for irrigation. We will see some of the ancient irrigation systems that made Oman an oasis on the Arabian peninsula.

Al Hamra, the "red city," is named from the darker buildings on the other side of the date palm plantation. They are many hundreds of years old. We visited a house museum there illustrating traditional practices.

This area is blessed with ample spring water that has, since ancient times, been channeled for irrigation by way of a aflaj system. The system is still in use. 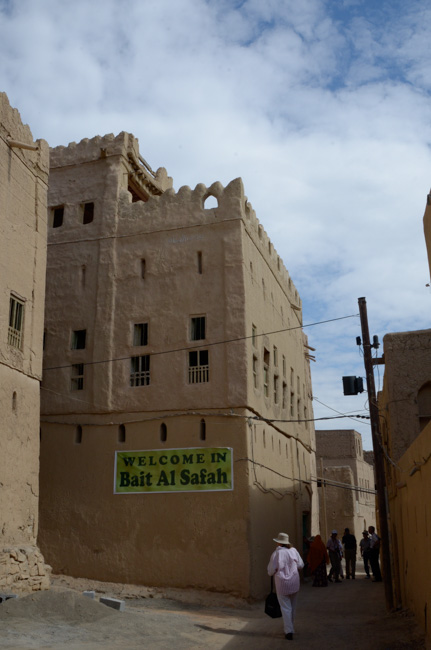 We visited the Bait Al Safah house museum. The family that owns it no longer lives there, but has preserved much of the traditional building and many of its furnishings. 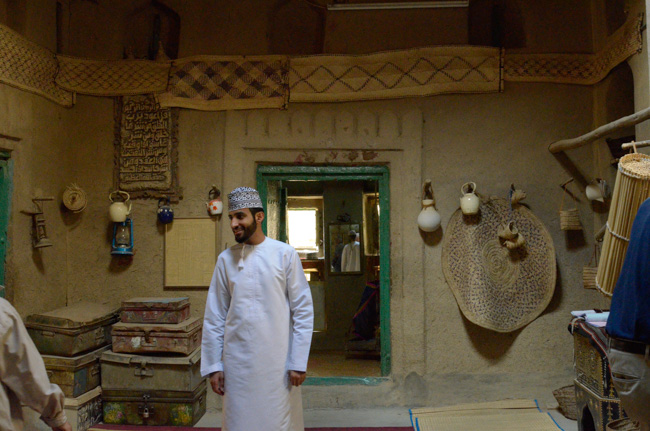 This young man of the family showed us around. He didn't speak much English, so there wasn't a lot of explanation. 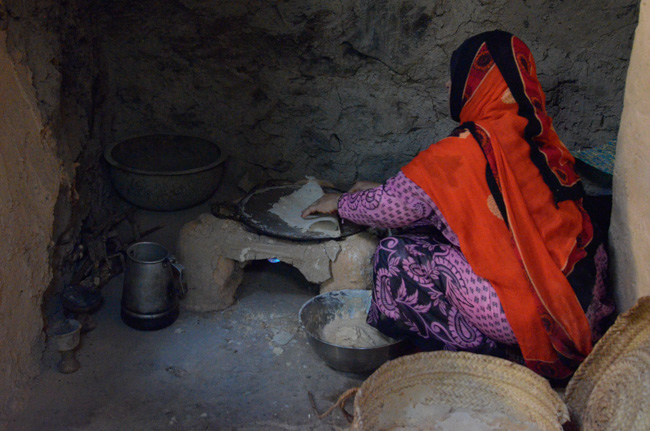 The kitchen was the most interesting part of the house. This woman was baking "crepes" over a gas fire. She spread the dough thinly onto a flat griddle and immediately pulled it off again. It was very flaky and we passed around pieces to nibble. 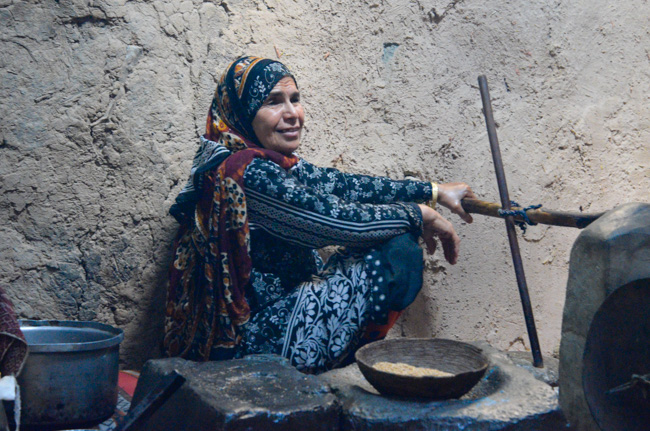 Another woman demonstrated the traditional means of extracting essential oils from a date paste. It was tedious.

She also had a rotary hand grinder for grinding wheat into flour. The upright stick sits into a hole on the grinding stone. To make the stone go around you "stir" the stick. It looked easy when she did it, but one of our travelers gave it a try and found it difficult to get a smooth working rhythm. It takes practice. 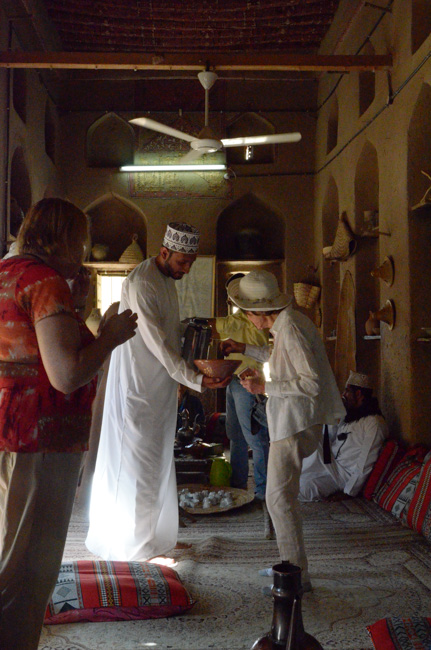 After wandering around the house we relaxed over coffee and dates. Omanis serve coffee in tiny cups with lots of cardamom for flavor. It isn't sweetened; you're supposed to nibble on a date while drinking to add sweetness.

There are dozens of date varieties. Many are used for animal fodder and only about twelve or so varieties are used in Oman for human consumption. Deliciousness varies across varieties.

All parts of the date palm are used in traditional construction: fronds for screens and ceilings, wood for beams. The ceiling beams in this image were elaborately decorated with red, black & white paint.

I have read that Bedouin in the desert fed their Arabian horses on dates & camel's milk because of the lack of pasture.

A small mosque was across the street. In addition to the traditional prayer room inside, this outdoor area could be used for overflow. I liked the diminutive mihrab.

Irrigation channels ran along the street and underneath building entrances. The water was clear and free-flowing and not at all stagnant.

This was a very typical window. The buildings are made of mud-brick with a mud & straw adobe stucco. As is the case with most of the traditional villages in Oman, older houses are being abandoned for new ones with all the creature comforts.

Some of the traditional houses are still occupied. As shown here they had air conditioning and presumably many other amenities. 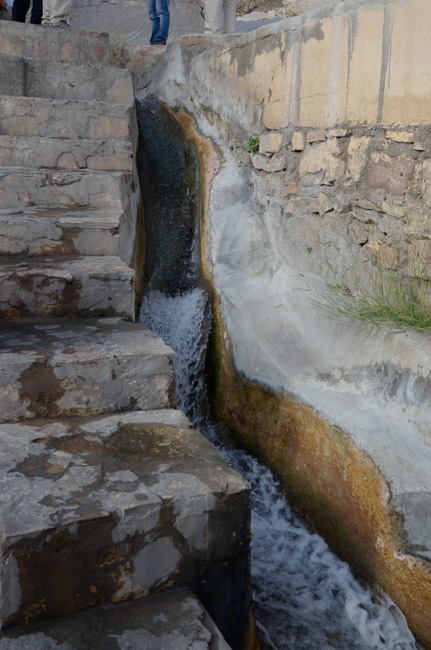 After lunch, we visited another aflaj irrigation system: Falaj Al-Khatmeen. The UNESCO inscription at the site reads:

The recognition of these traditional water delivery systems, which came into existence as far back as 2000 years ago, as international landmarks highlights the outstanding contribution of Omani engineering ingenuity to irrigation, agricultural development, human settlement and traditional management systems among other civilizations: 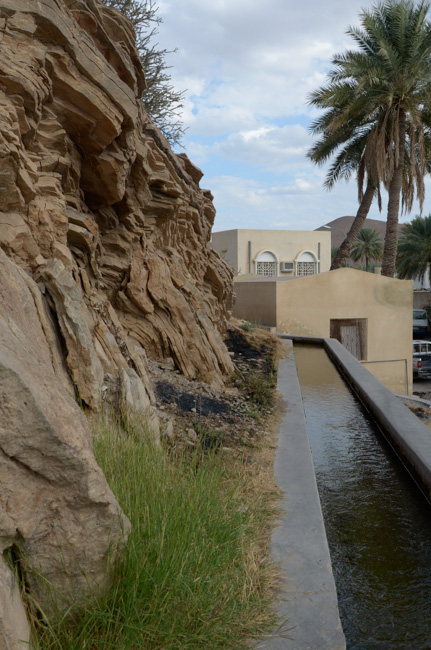 One branch of the system takes water to a community washing facility in the building shown here, but most of the water goes to the fields for irrigation. Residential and commercial water is primarily supplied by desalinization facilities.

Water usage is a concern throughout Oman. For example, ornamental plantings in the cities are irrigated with grey water. 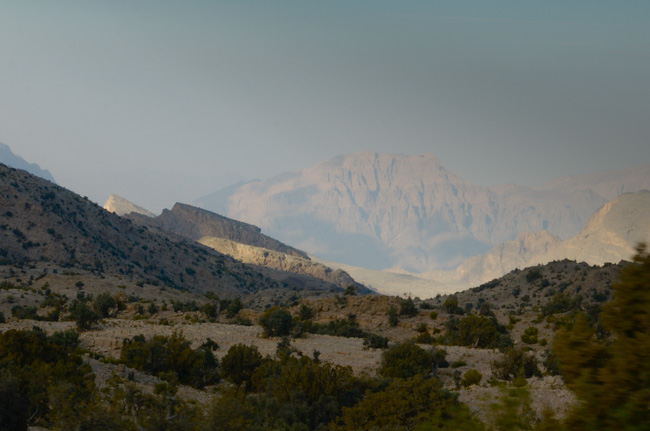 At last we headed up into the Jebel Akhdar mountains toward our hotel. A control point at the base of the road leading toward the highlands checks out your vehicle. Four-wheel-drive is mandatory. The roads we traversed were paved two-lane roads, soon to be widened to four-lanes, and I could see no need for 4WD although they were steep in places. I expect that secondary roads in the region may have been a different story.

The name Jebel Akhdar means "Green Mountain." Compared to some of the lowland areas it is relatively green. 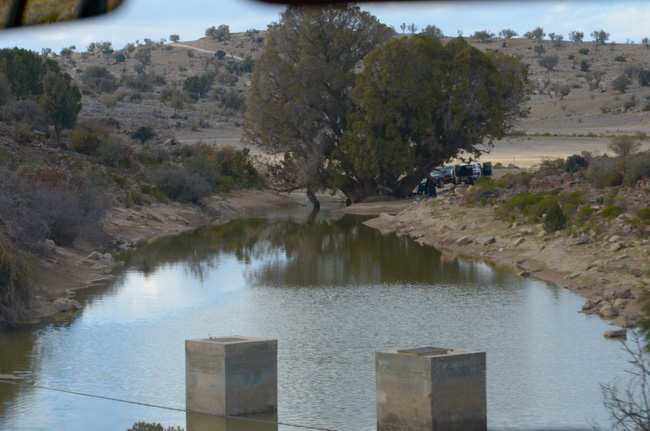 Partway along we passed this small pond. Mikey said it was a popular holiday camping spot and we saw several families enjoying the area. Even though it was warm to hot in the lowlands, the mountains were cool even during the day. At night it was downright chilly. 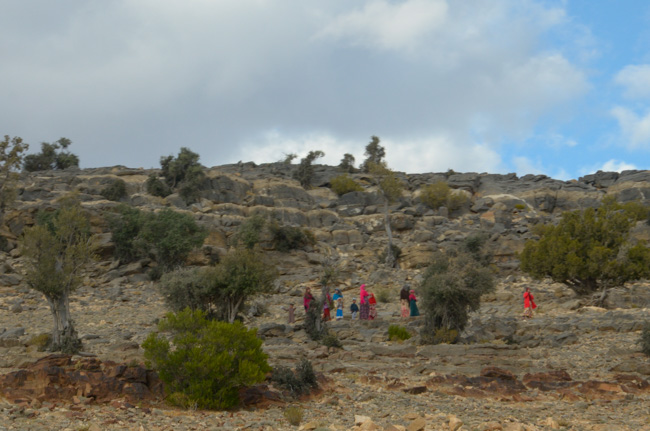 Not too far from the camping area we passed this group of moms and children out for a stroll. It was Friday, which is the Muslim equivalent of Sunday, so maybe this was something they did for fun like the old-fashioned "Sunday drive" of my childhood. 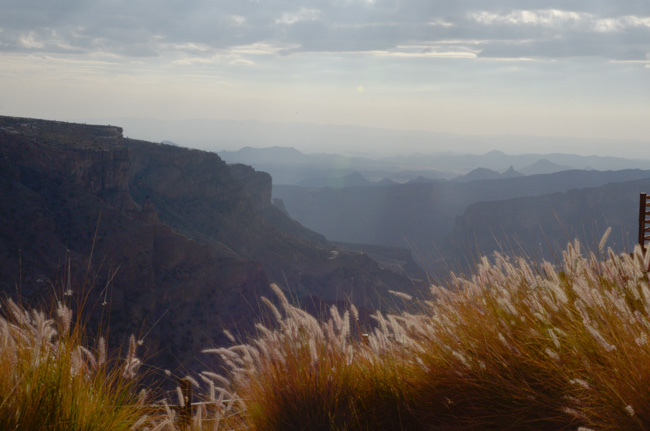 After climbing up-up-up we arrived at our hotel: Alila Jabal Akhdar. The name "Alila" means "surprise." It was aptly named!

The views were stunning. We were reminded of the Grand Canyon. This was taken from the patio in front of the hotel restaurant shortly after we arrived. 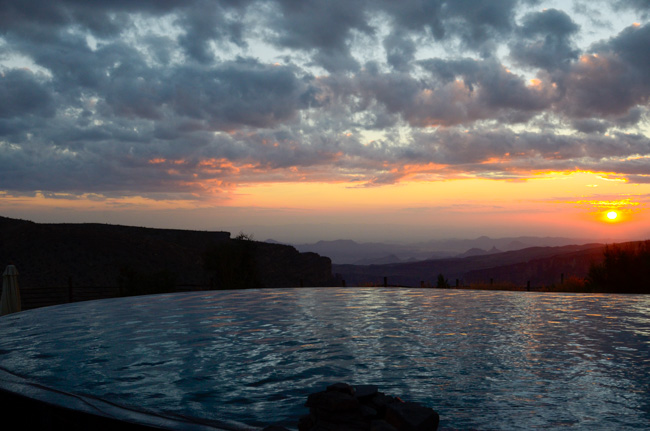 This was later in the evening just before sunset. The vanishing edge pool was located right outside the bar. Unfortunately I couldn't eject all the swimmers in order to get a perfect reflection in the water.

We've only stayed in hotels this nice twice before: once in Buenos Aries and once in New Zealand. We don't really expect to stay in one again, but you can always hope....