The next morning we were still on our way to our next destination: Muscat, the capital of Oman.

Dr. Weiss gave us a presentation on "Sectarianism in the Modern Middle East." He defined sectarianism as a focus on doctrinal issues. This appears in many religions, but the major split in Islam is between Sunni and Shi'a dating back to the years immediately after Muhammad's death and conflict over the succession. Over time the differences in doctrine have become incorporated into politics and institutions. Dr. Weiss discussed two of the Gulf States to illustrate the current situation: Saudi Arabia (majority Sunni with Sunni rulers) & Bahrain (majority Shi'a with Sunni rulers). The specifics of his talk were more complex, but the bottom line is that the situation is volatile. 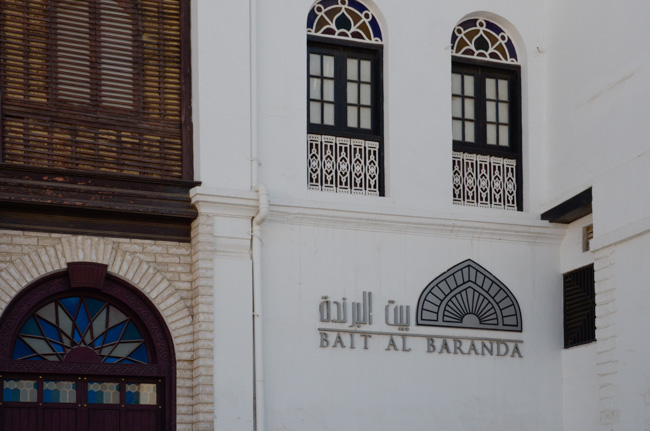 Our first stop of the afternoon was the Bait Al Baranda. It was an interesting building with many ethnographic exhibits. My favorite was an exhibit dedicated to plate tectonics with a nifty hands-on model of subduction. There was also a discussion of obduction, which formed the mountains of Oman. As tectonic plates collide, usually the heavier sea floor sinks down into the subduction zone, but here it rose up over the lighter continental plate. The discussion at the link was the least technical description that I could find.

We next visited old Muscat. The original Muscat harbor is guarded by the two fortresses seen in the background. The Al Mirani fort is closer and Al Jalali is on an island beyond it. Neither of the forts is open for tours.

We did get a chance to walk around the harbor area.

Although most of the houses in the countryside are colorful and whimsically decorated, the houses in Muscat proper were almost always white or cream. 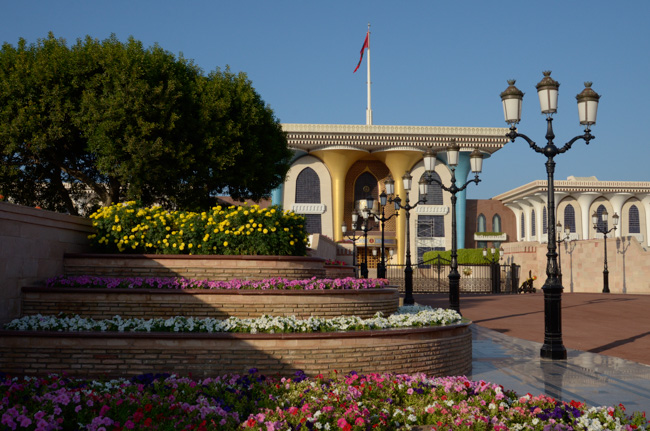 The Al Alam Palace overlooks the harbor (on the far side) and is one of the royal residences the Sultan. Sultan Qaboos, the leader at the time of our visit, dedicated his life to bringing his country into the modern world in a positive way, building and expanding schools, hospitals and good housing, but Oman is still an absolute monarchy. Sultan Qaboos died in January, 2020, without publically naming a successor. Although he stated that he wanted the royal court to choose a successor, he took the precaution of creating a sealed envelope with his own choice. The court promptly opened the letter and picked that choice: a cousin, Haitham bin Tariq.

Sultan Qaboos kept Oman out of regional conflicts. A 1995 analysis of the sultan's foreign policy is in line with what we were told while there. Since that time Oman has been a key player in negotiations  with Iran, including the Iranian nuclear deal. 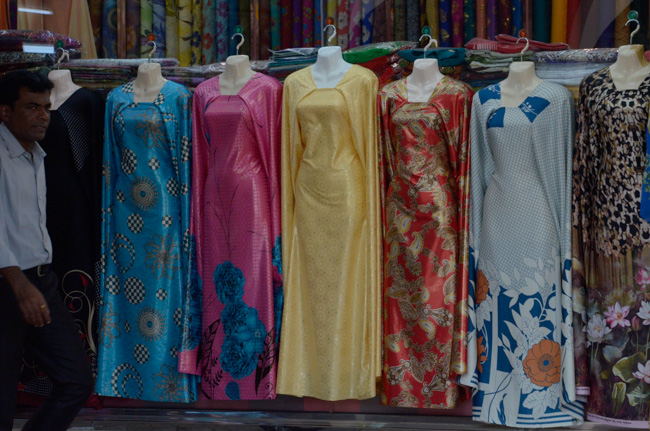 After our visit to Old Muscat, we returned to Muttrah, the harbor where our ship was docked, to visit the huge Muttrah Souq. My favorite display at the souq was this fabric store. They have taken bolts of cloth and fashioned this arrangement of gowns simply using pins to control the drape. I'm not a great shopper, but I can spend hours in a fabric store. 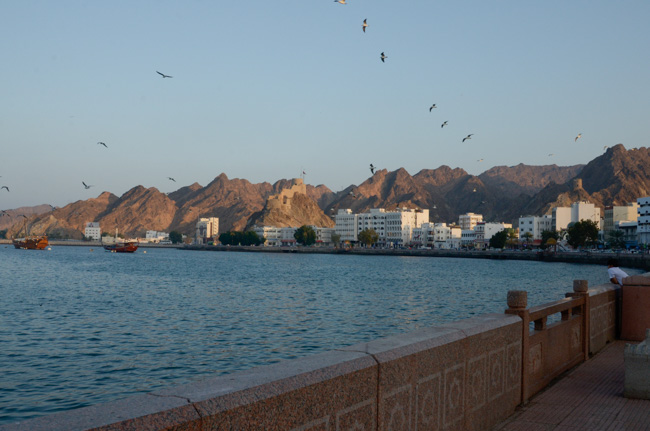 While waiting for the bus to take us back to the ship, we strolled along the corniche. Unlike the other Gulf States that have headed down the skyscraper path, Oman's building codes prohibit huge modern edifices. It makes for a hunan-scale environment at the cost of extensive urban sprawl. Nevertheless we preferred it. 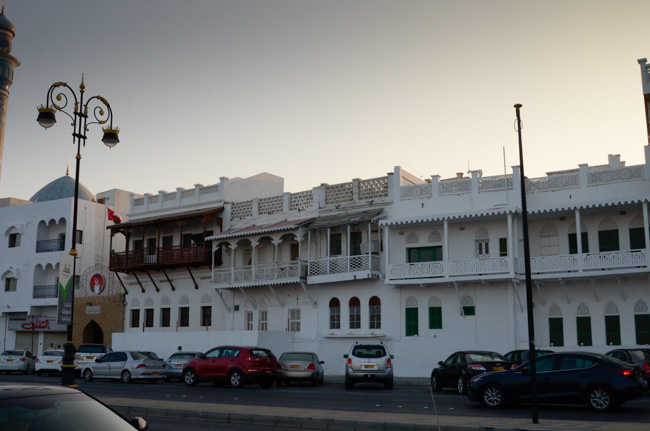 These buildings facing the harbor appeared to be residences. I was charmed by the balconies.

Soon the bus came to pick us up and we returned to the ship. The following day was the last day of the main tour and many of the participants were taking late afternoon flights, so we had the Captain's Farewell reception and dinner this evening. It was a gala occasion and a fitting farewell to the ship and its crew.