Our visit to Bahrain had two different goals. A number of our fellow travelers were taking an extension to the Aramco compound in Saudi Arabia. The rest of us would tour Manama, the capital of Bahrain. Jim and I considered the Saudi visit, but largely because of distaste for the Saudi sponsorship of the radically conservative Wahhabi sect of Islam, we decided against it. Besides it was very expensive! We made an excellent choice because the Saudi excursion spent much of the day waiting at various border checkpoints while we had a enjoyable morning followed by relaxing free time on the ship awaiting their late return. 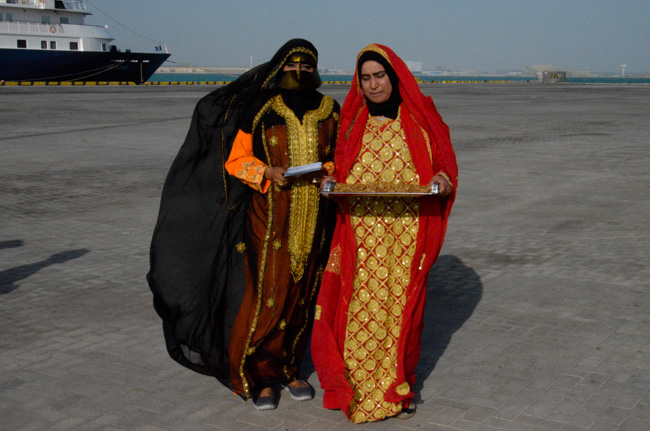 A welcoming party met us as we disembarked from the ship. These two ladies offered Arabian sweets. Their abayas were much more festive than elsewhere.

This gentleman served traditional Arabic coffee, which is heavy on cardamom. There was also a man with a falcon.

These folks were still there to bid us adieu when we returned shortly before lunch.

Our first stop was the Bahrain National Museum.

There were numerous historical and cultural exhibits inside and a modern sculpture "garden" outside. We didn't have time to linger over the exhibits. Moreover I got separated from the others and got lost. By the time I figured out where I was and how to get out, it was time to go.

Our next stop was the Bait al Qu'ran, a museum dedicated to the Qu'ran. It houses a huge collection of Qu'rans from large ones written on parchment to tiny passages written on grains of rice. It also claims to have the oldest copy of the Qu'ran, but so does a library we visited in Samarkand. A search of the WWW turns up several contenders throughout the world, but many are fragmentary. I don't remember if the copy in the Bait al Qu'ran was a fragment or complete.

We weren't allowed to take pictures of the displays, but this gentleman gave an interesting lecture on the Qu'ran and its genesis. According to tradition, Muhammad received the text orally from the angel Gabriel (yes, that Gabriel) and passed it on orally to his friends and followers. It wasn't until many years after his death that it was written down.

Although Manama in general had standard high-rises rather than the over-the-top dramatic towers we saw in Dubai and Doha, this building was striking. It is their World Trade Center. Its unique feature is the three wind turbines between the twin buildings. Their shape funnels wind from just about any direction into the gap to drive the turbines.

Bahrain has much smaller oil and gas resources than the other Gulf nations, so it has worked hard to create a diversified economy with an emphasis on financial services. Our guide emphasized that unlike the other Gulf states, Bahrainis hold all levels of jobs rather than pushing all lower-status work onto expats. This was also true of Oman.

Bahrain earned the highest InterNation expat ranking of any of the Gulf States: 19 out of 67. That put it higher even than the USA (#26). 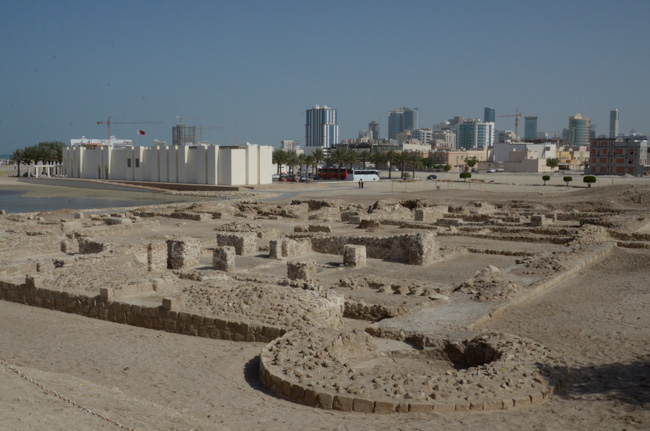 Next we visited Qal'at al-Bahrain -- the original settlement area on the island. It dates back to the ancient Dilmun civilization. Fresh water springs located nearby hold the key to the long occupation of this island, which some maintain was the prototype for the Garden of Eden.

The towers of modern Manama can be seen in the background.

They may not look like much now, but these fresh-water springs on the edge of the sea are the key to Bahrain's history. The springs are no longer free-flowing, but at one time they were. It was this vital resource that attracted settlement to the area. 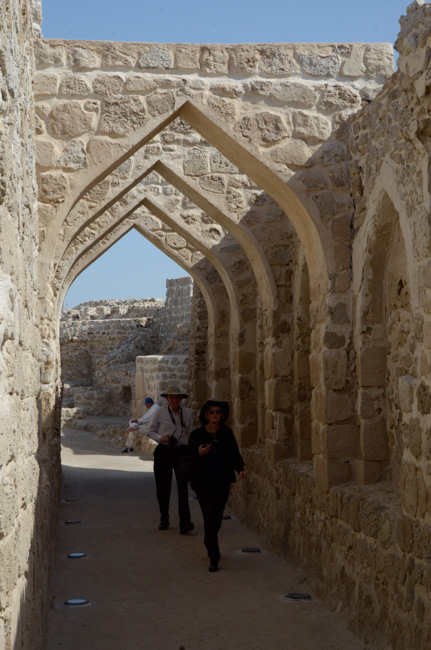 The Portuguese established forts much later at the same location as the Dilmun people and for the same reason. The ruins are well preserved.

Our guide gave us an overview of arranged marriage, Bahrain style. She said that this usually came up when western tourists visit and she shared her personal experience with her own marriage.

Mothers are always on the lookout for suitable matches for their children and her family heard about a likely candidate. The mothers made the initial contact. Once that hurdle was passed, each mom put out feelers among the many aunties and cousins to find out more about the other family. Their goal is to identify partners that will be compatible and who will have a high likelihood for a successful relationship. Divorce is an embarrassment for all concerned. If everyone gives a thumbs-up, the potential bride and groom are introduced (in a setting surrounded by said aunties and cousins). If the two young people are agreeable, they then have an opportunity to get to know each other in chaperoned settings before the formal engagement is decided and announced. The engagement is binding and difficult to break because it is at this time that financial and other "contractual" details are ratified. The actual wedding follows not long after.

Extended families are important so the two families must feel that they can have a relationship as well as the couple.

She emphasized that at no time was coercion applied and no doubt that was true in her case. That leaves open the question of whether it is universally true. 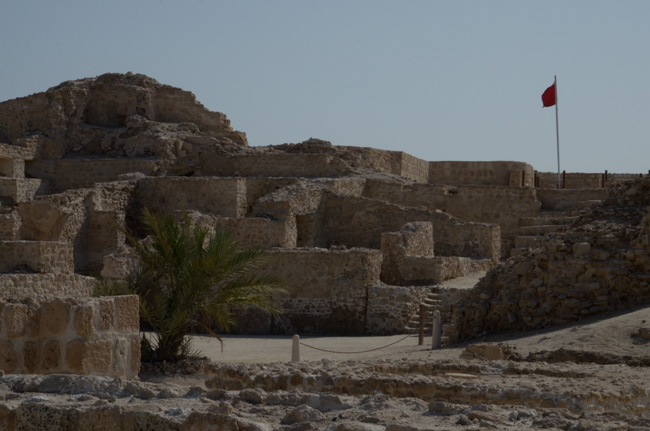 The remnants of the Portuguese fort are the highest point of the area. 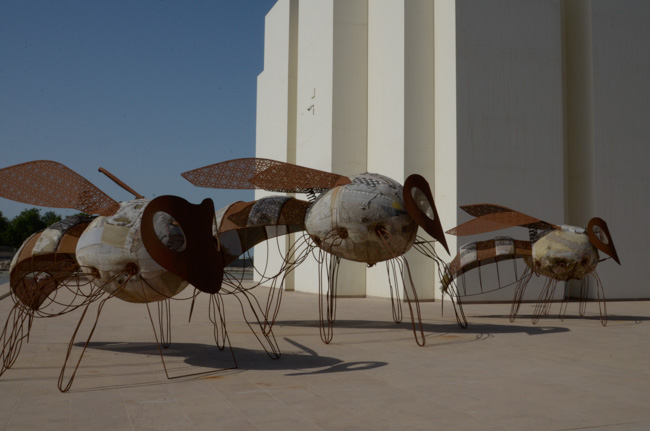 They had no historical or cultural significance, but I enjoyed these wasp sculptures near the Qal'at al Bahrain. 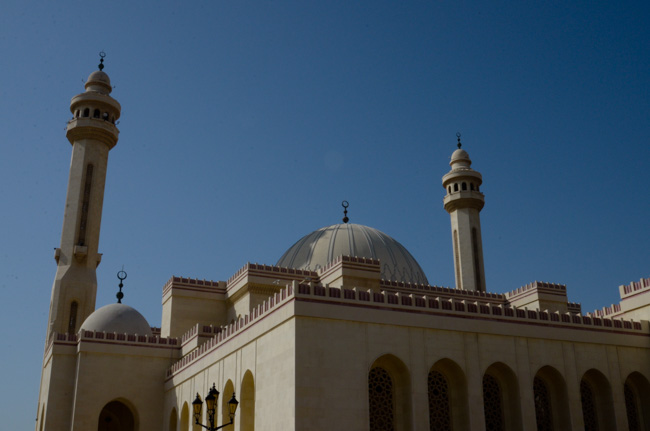 Our next destination was the Al Fateh Grand Mosque. Like all the mosques we visited, it is new. The fiberglass dome is the largest such dome in the world.

The visit required all of us ladies to don one of their extensive selection of abayas and headscarves. Gents of course did not have such a requirement, although there was a dress code for them as well.

The interior of this mosque was more restrained that many we visited.

The angular pattern on the walls is geometric or square Kufic calligraphy.

This was the first of many large crystal chandeliers that we were going to see. There seems to be a tacit competition among these states over who has the largest and most ornate chandelier. This one was quite restrained and more to my taste than many.

We saw many mosques on our travels with the various jurisdictions striving to outdo each other in the size, lavish appointments, etc. of their places of worship. The guides at each of them also tried to overcome the negative image that Islam has received as a result of the vicious actions of terror groups claiming the mantle of jihad. Although it was great to hear sincere Muslim individuals decry the violence of the few, I would prefer to see the greater Muslim community rise up in unison and loudly denounce ISIL, the Taliban, and other extremist factions.

I began to characterize much of what we heard in the mosques as propaganda. Although the guides no doubt believed what they were saying, at least some of it was not true based on our own experiences. For example, one guide asserted that there is nothing in Islam barring believers of other faiths from entering a mosque. Any such restrictions were the result of local laws. Our experience has been that it is the rare mosque, at least in the Middle East, that allows non-Muslims to enter. Another guide assured us that imams are simply prayer leaders and have no clerical or political status. Not so fast! This varies between Shia and Sunni sects. And don't get me started on the status of women! 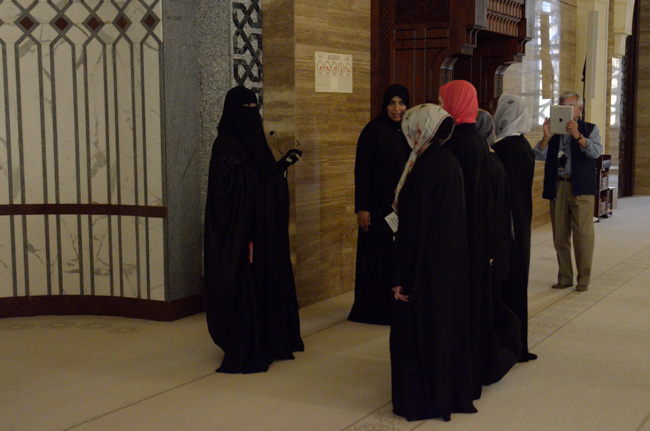 The guide at this mosque, completely swathed in black, including gloves, used volunteers from our group to illustrate the initial position that worshippers take during prayer time. With one exception the mosques had linear designs in the carpet to aid the faithful in lining up properly shoulder to shoulder. There are a set of ritual positions during the prayers performed in unison (this mosque even had a display of the various poses).

Although it may be allowable for women to pray in the same area as men, there were usually separate (but not equal) prayer halls for women. If they do use the same room, women position themselves in the back of the room. We were assured that neither of these traditions meant that women were second-class worshippers. It just meant that they didn't want men viewing their backsides as they proceeded through the ritual obeisances!

Although men are required by Islam to visit the mosque for prayer, women are allowed (and encouraged) to pray at home.

Here I am in suitable Islamic dress. Can't say that I recommend it.

After our visit to the mosque we returned to the ship for lunch. We were scheduled to "set sail" to return to the UAE for our next port of call, Abu Dhabi, shortly thereafter. Our departure, however, was delayed by the late return of the Saudi contingent, which resulted in a number of frantic telephone calls by the tour leaders. The lost lambs eventually made it onboard.

That afternoon we enjoyed another lecture by Prof. Max Weiss and our first lecture by Dr. Abbas Milani of Stanford.

Dr. Weiss spoke about modern Arabic literature, much of which is produced and distributed underground. Dr. Milani spoke of the origins of Islam, the means of its expansion, the origins of the schism between Sunni and Shia, and the forces that work against any rigorous analysis of the Qu'ran or the foundations of the religion.