Before getting into anything else, how does one pronounce "Qatar?" The short answer is: any way you want. We heard several different pronunciations. The two most common were kah-TAR and CAT-er. And anything in between.

Qatar was once considered a candidate for joining the UAE, but discussions broke down and they remained independent. We didn't get much cultural or political information during our travels, but the CultureGram that was distributed prior to the trip stated that Qatar has been investigated by the International Labor Organization (ILO) for abusive practices against the expat workers. The initial complaint stated in part:

The problem of forced labour affects the migrant worker population of roughly 1.5 million. From the moment migrant workers begin the process of seeking work in Qatar, they are drawn into a highly exploitative system that facilitates the exaction of forced labour by their employers. This includes practices such as contract substitution, recruitment fees (for which many take out large, high interest loans) and passport confiscation. The [Government of Qatar] fails to maintain a legal framework sufficient to protect the rights of migrant workers consistent with international law and to enforce the legal protections that currently do exist. Of particular concern, the sponsorship law, among the most restrictive in the Gulf region, facilitates the exaction of forced labour by, among other things, making it very difficult for a migrant worker to leave an abusive employer.

Looking at the ILO web site, the UAE actually seems to be trying the hardest to protect its expat workers -- at least until they are shipped home.

The InterNations expat ranking mentioned earlier slams Qatar -- it ranks 60th out of 67 places ranked, the worst by far of the places we visited.

The year after our visit, the other Gulf States abruptly severed relations with Qatar, claiming that it sponsored terrorism. As of this update in 2020, the situation is still fraught. 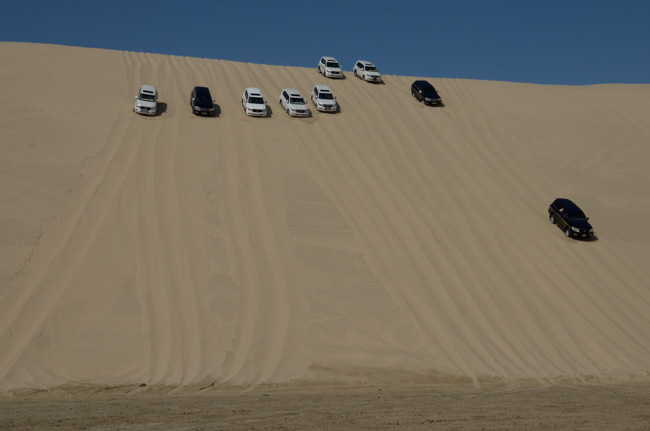 Our adventure for the day included "dune bashing" in the area south of town. We rendezvoused with a fleet of 4WD vehicles to take us into the sand. We were divided into an "A" group for aggressive bashing, "B" for moderate bashing, and "C" for those who would really rather take the Interstate.

I think these were the B & C groups together. Yes, this was "easy" bashing. 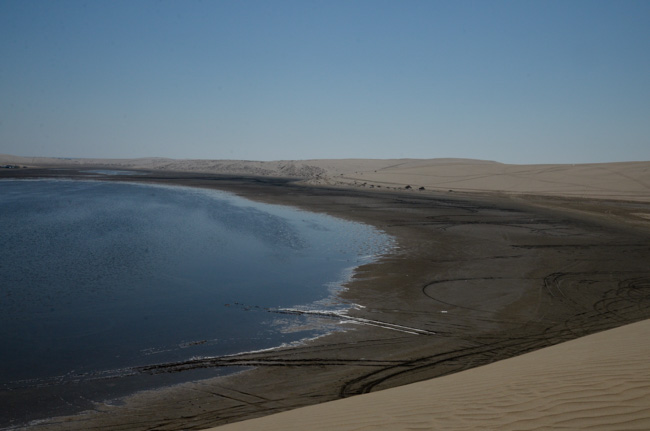 The goal of our dunes trek was the Khor Al-Adaid, also known as the "Inland Sea." It lies on the border between Qatar & Saudi Arabia.

The "sea" is tidal and the tide must have been out. I have to confess that, based on the information I had seen on it prior to the trip, I was expecting something a bit more dramatic. 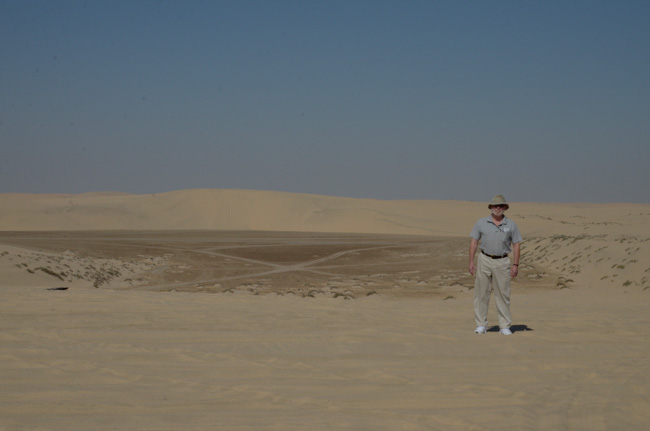 All around the area were absolutely barren dunes with pale white sand. Jim really blends in! 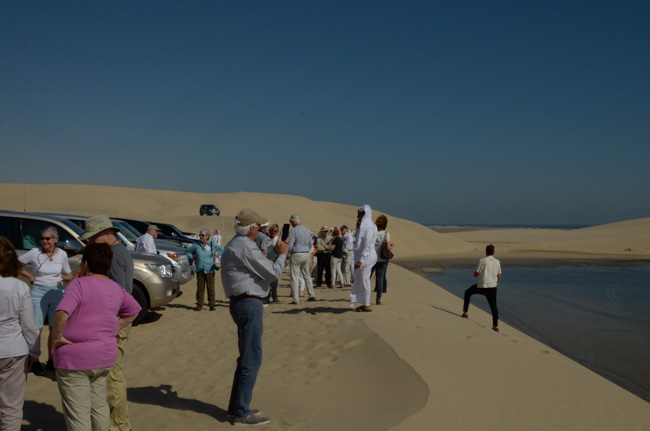 Although the area is isolated and barren, there were many other tourist groups besides our own. It may have been a impressive place with solitude.

There is supposed to be a great variety of wildlife in the sea and on land, but we never saw anything bigger than an insect. 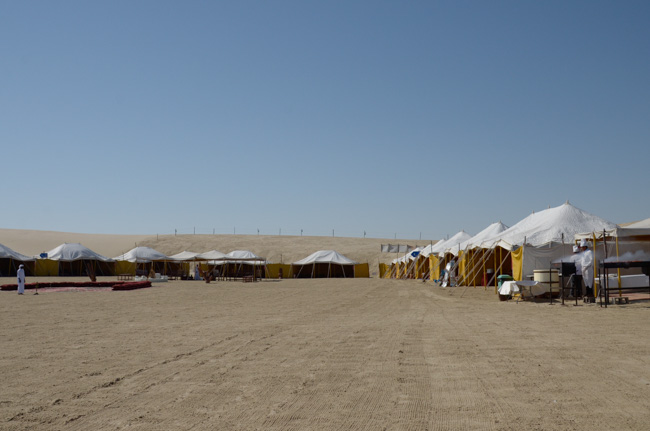 After bashing we gathered at a camp on the beach. There were a number of activities available, including swimming in the gulf, followed by a barbecue meal. 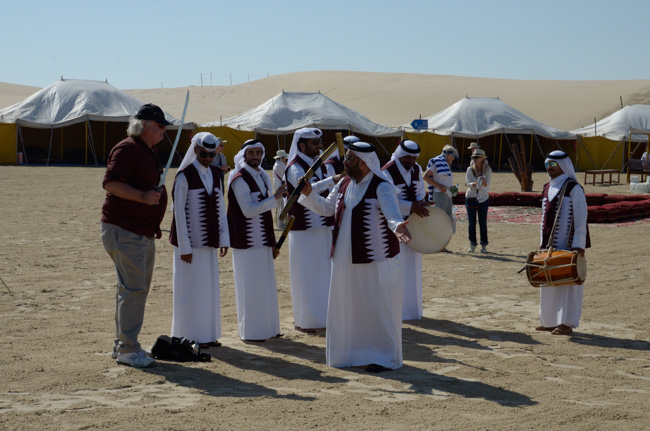 We were welcomed to the camp by two groups of singers who marched in with a drum and "swords" accompanied by a vigorous chant. I don't know if it was a war chant or what as there was no explanation.

One of our number decided to join in the fun. He's being given some instruction on how to wield the sword.

The singers appeared periodically throughout our time at the camp. 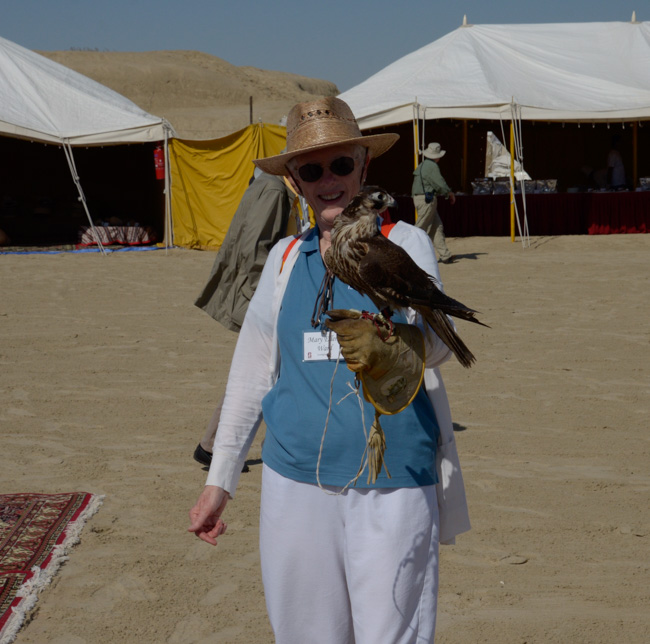 At one of the exhibit areas a young man had a falcon that we could take turns holding. The bird seemed completely bored by the whole thing. It was surprisingly heavy.

The main other form of amusement was swimming or wading in the Persian, er Arabian, Gulf. 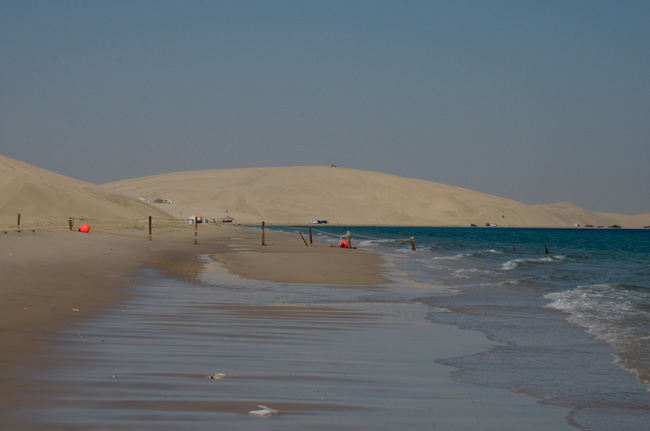 The beach is as nice as anyone could want. The water was warm, the sea bottom was sloping and there was just enough surf to make it fun to wade. 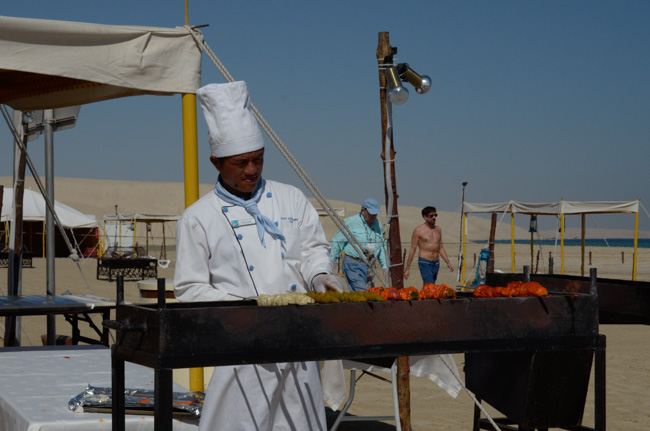 And the food was delicious!

The only sand in the ointment, so to speak, was that the ladies' shower wasn't working. The ladies who swam felt a bit sandy and sticky during dinner and on the ride home. 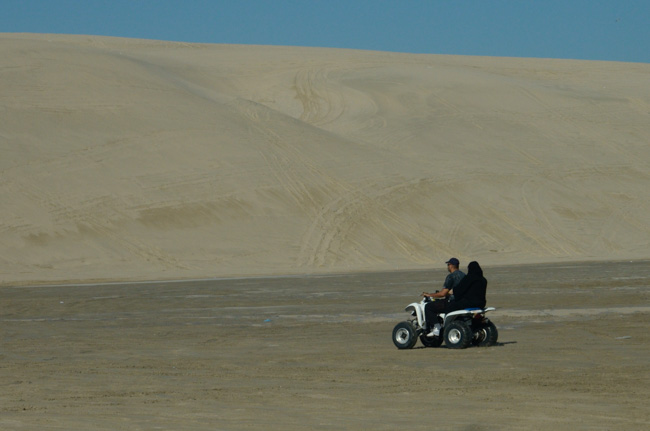 On our ride along the dunes on the way back to the buses, we saw that even abaya-clad women could come out for some thrills with their husbands.

After returning to the ship, we enjoyed a second lecture by Professor Swelim on the Museum of Islamic Art, which we would visit on the following day.