This was the day the official trip began.

Oil was discovered in Dubai in the 1960s, but at present it is only a very minor portion (5%) of the emirate's revenue. The rest comes from transportation, aviation, tourism and financial services. (We have a friend who will fly Emirates Airline, based in Dubai, in preference to every other airline.) Dubai is considered the business hub of the Middle East.

There is a huge population of expatriates, mostly from Pakistan, India and Bangladesh.  About 80-85% of the population of the UAE is expat. There is no way for them to become citizens or permanent residents. If they lose their jobs, they have 30 days to find a new one or they are deported. When they reach the mandatory retirement age, currently 60, they must go home. This is a hardship for many, if not most. In some cases it can be abused and lead to a form of involuntary servitude. This situation was true throughout the nations we visited. 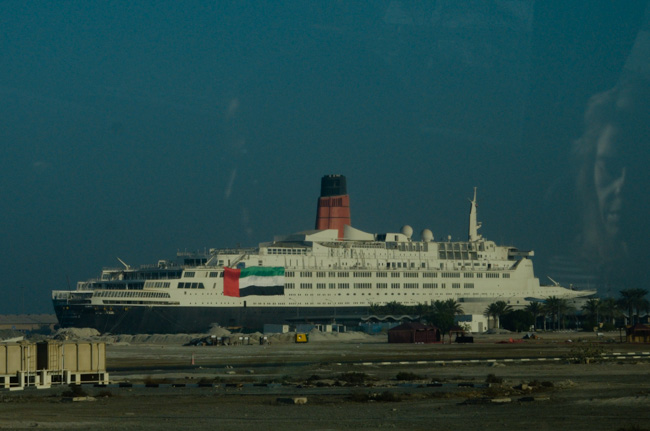 As the buses drove through the port at the beginning of our tour, we passed the Queen Elizabeth II, which has been moldering in Dubai since being retired by Cunard. The plans to turn her into a hotel were derailed by the 2008 global recession. In 2018 the ship finally made her debut as a permanently moored hotel after extensive work.

My parents crossed the Atlantic on the QEII for their 50th anniversary. It was at a time that visitors could go on board before departure so we were able to visit them in their stateroom. The cabins were not as spacious as on modern ships, but they were very nice. 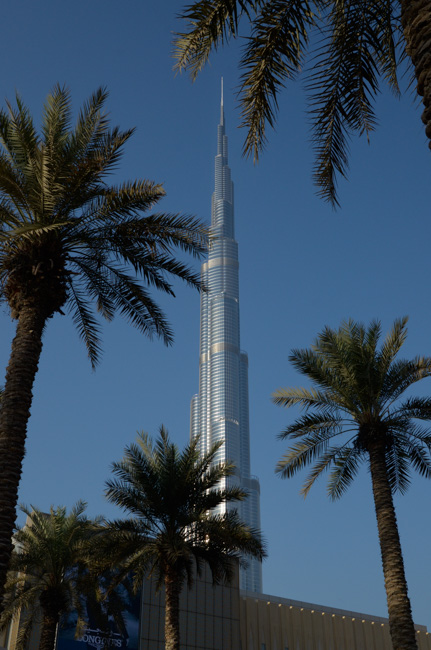 The highlight of the morning tour was a visit to the Burj Khalifa, the tallest building in the world. It is beautiful too.

Most of our group took the elevator up to the outdoor observation deck on the 124th floor. The building has 163 floors in all, but the top eight floors are dedicated to mechanical needs and communications.

Jim stayed down below with a few others and prowled through the attached Dubai Mall. We suspect that the Dubai government subsidizes many, if not all, of the stores. 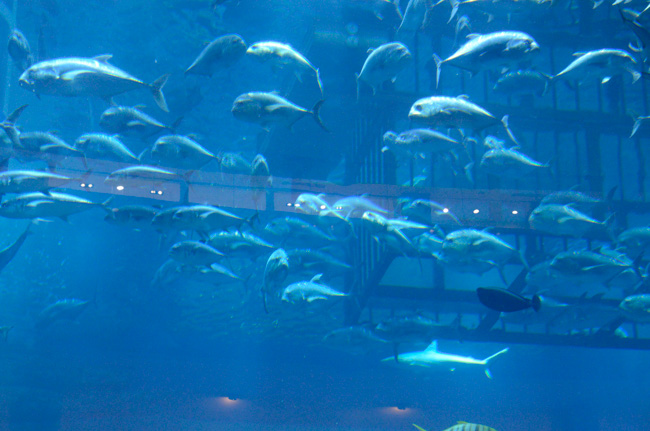 Just inside the entrance to the Dubai Mall on the way to the tower elevators, we walked past this enormous aquarium. Alas, we didn't have time for the snorkeling adventure! 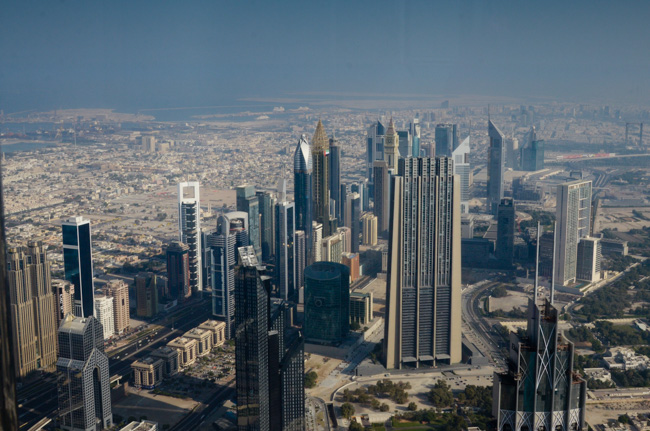 The view from the observation deck was spectacular.

Dubai specializes in glitzy office towers, hotels and condos. Older parts of town tend to be low-rise. The cluster of taller buildings in the far background on the right of the image marks the location of our hotel.

The port can be seen in the distance on the left side. Our ship is so small compared to the other cruise ships, that it is barely a blip. The QEII can be seen and also two other large ships. 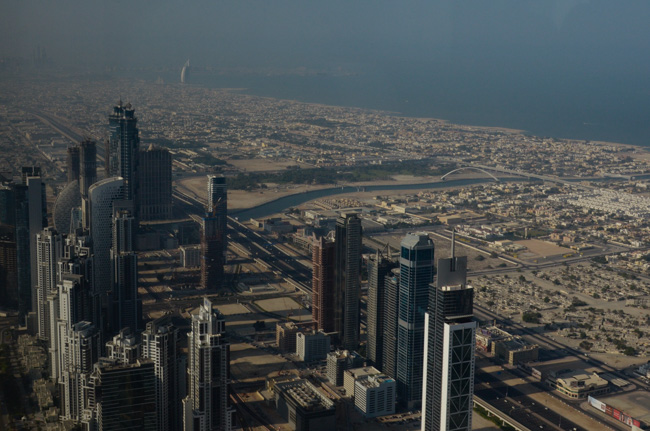 Looking the opposite direction shows the Burj Al Arab hotel in the distance. We will be seeing it closer up later. Beyond it is the famous palm-shaped island, but it is too hazy to get a good view. 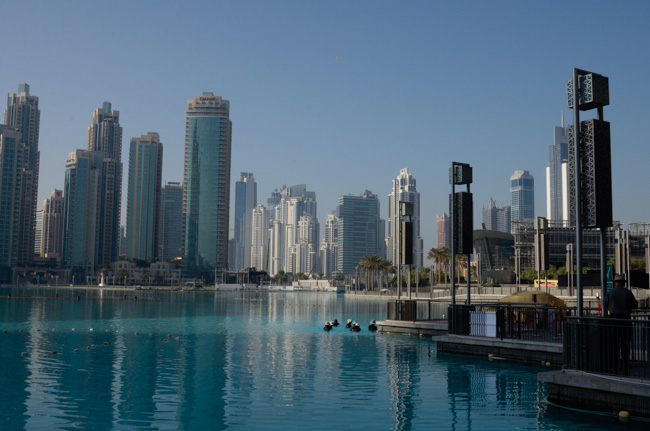 This large pool adjacent to the Burj Kalifa contains the Dubai Fountain (YouTube video opens in new tab). We did not see the fountain in operation. The black dots in the water are workers in wet suits scrubbing the tiles on the bottom of the pool. 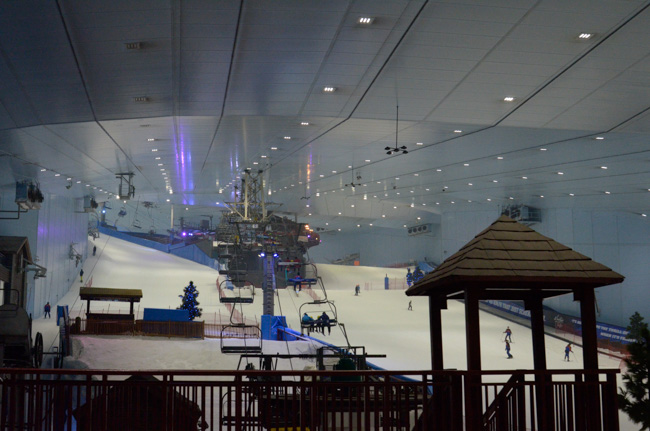 Our favorite attraction, however, was Ski Dubai!

At least one of our number rented gear and took a run or two. He said it was a legitimate ski slope. I'm sure there are smaller slopes in Virginia. 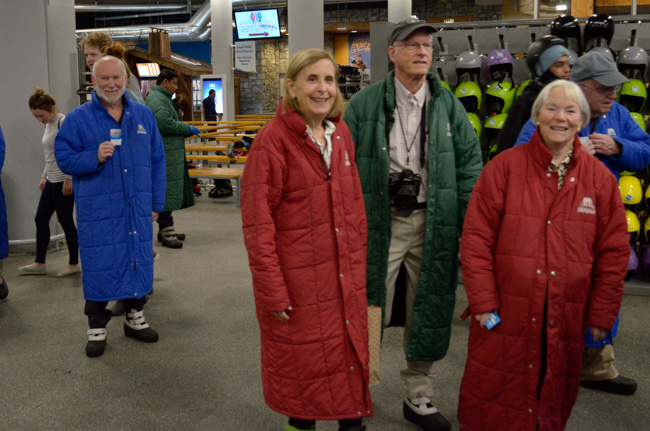 We all reeived ankle-length warm coats, boots and gloves before going inside. (We got to keep the gloves!) They even supply socks for those who don't have them. 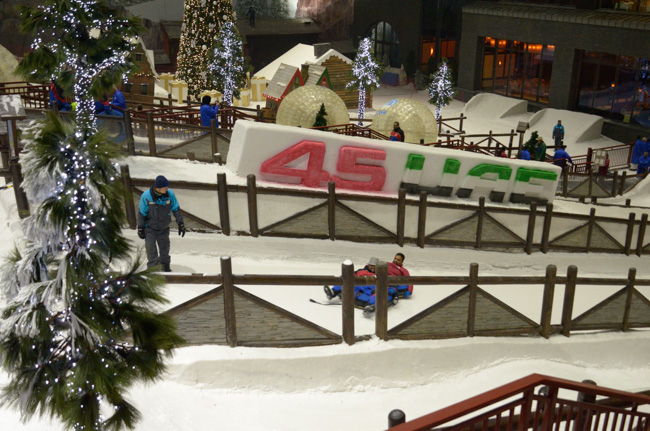 In addition to skiing there were various kinds of tubing attractions, ice sculptures, and a penguin march.

In a country where public alcohol consumption is discouraged, to say the least, we were amused to find a lounge with this Aprés Ski Instructor. We didn't explore to see if they served glühwein.

The fire in the background is an LED image. It looked pretty realistic from a distance.

Our final stop of the day was Jumeirah Beach to view the Burj Al Arab hotel. Needless to say, we hoi polloi weren't allowed inside the hotel to gawk. 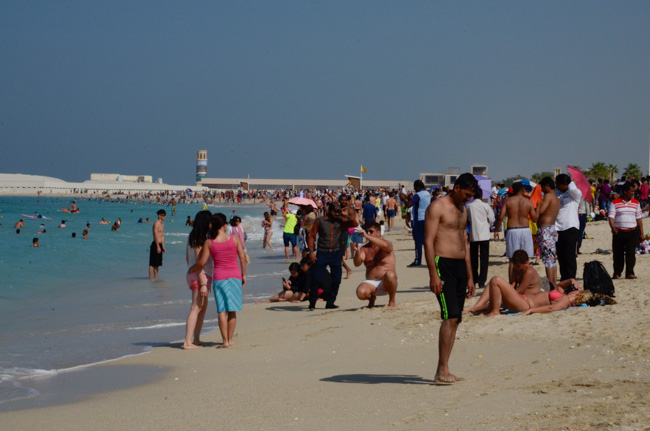 The beach itself was popular. This was a Wednesday and not a holiday, so one wonders what the crowd might be on a weekend. (Weekends, by the way, in all of these countries are Friday & Saturday. Sunday is a regular working day.)

There was not a burkini in sight, but there were a number of non-swimmers wearing modest clothes. In Oman, at any rate, we were told that women simply do not go to the beach. Maybe the burkini would liberate them as it was designed to do. 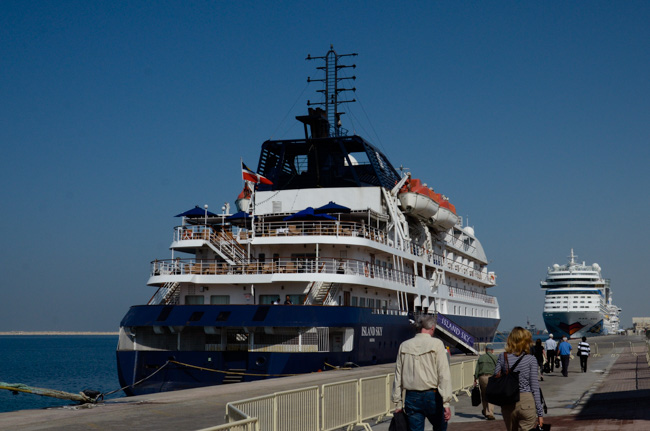 After our tour we returned to the Island Sky for lunch and an early afternoon departure for Qatar. While underway we had our first lectures by Professor Max Weiss of Princeton University and Professor Tarek Swelim of Hamad bin Khalifa University, Doha.

The Captain's Champagne Reception in the lounge introduced the crew of the ship. It was followed by the Captain's Welcome Dinner in the dining room. This was one of the few meals that we ate in the dining room. Almost all of our meals, including breakfast, were on the 5th floor Lido Deck, seen here with the blue umbrellas. Most of our ship traveling has been in cold climates or rough seas, so it was a treat to enjoy warm weather and smooth voyaging.