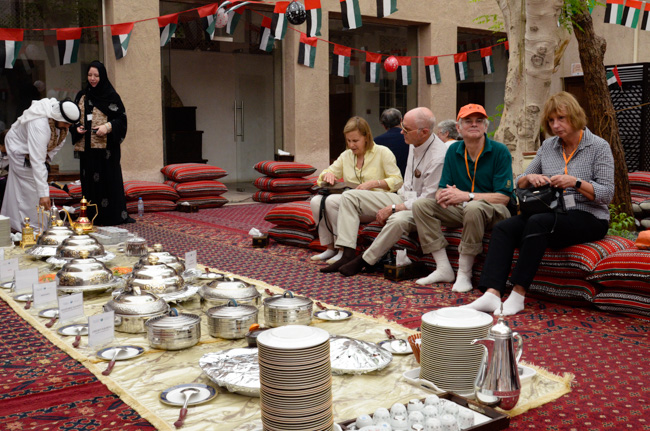 Dubai, the start of our journey, is the most populous city of the United Arab Emirates (UAE).

The best part of the first day was our visit to the Sheikh Mohammed bin Rashid al Maktoum Centre for Cultural Understanding. Much about this visit was interesting, but my favorite parts were the delicious lunch and the discussion of different styles of dress. There are subtle differences in the dishdasha (thawb) worn in the various Gulf States and the ghutrah or headdress. (Both of these are known by other names.) The agal cord worn around the ghutrah serves as hobbles for camels or horses.

In the afternoon we took boats across the creek to visit the spice and gold souks. These colorful spices caught my eye. The sellers in the gold souk were, of course, very insistent on catching your eye.

One enterprising soul pestered Jim with his offerings. Jim responded, "I don't want any." He finally asked, "well, what DO you want?" Jim said: "Nothing." "I've got nothing!" was the retort, delivered with a big grin! Jim still regrets he had no cash to give him for such a smart aleck response.

The next morning the main tour began. First off, we visited the Burj Khalifa, not just the tallest building in the world but also beautiful.

I took the elevator to the outdoor observation deck on the 124th floor. The building has 163 floors in all, but the top eight are dedicated to mechanical needs and communications.

Jim stayed down below and wandered through the attached shopping center. We suspect that the Dubai government subsidizes many, if not all, of the stores.

Our favorite attraction that day was Ski Dubai! We received ankle-length warm coats, boots, and gloves before going inside -- even socks if needed. We got to keep the gloves, and I use my pair around town in the winter.

A few of our number rented ski gear for a run or two. They said it was a legitimate ski slope. I'm sure there are smaller slopes in Virginia.

In addition to skiing there were various kinds of tubing attractions, ice sculptures, and a penguin march.

The next morning we docked in Doha, Qatar. Our adventures for the day included "dune bashing" south of town. We rendezvoused with a fleet of 4WD vehicles to take us into the sand. There were three groups: "A" -- aggressive bashing, "B" -- moderate bashing, and "C" -- those who would rather take the Interstate.

After the bashing we gathered at a camp on the beach for food and entertainment by a troupe of singers. There were a number of other activities available, including swimming. The 4WD vehicles took us back along the beach to meet buses for the return to the ship. 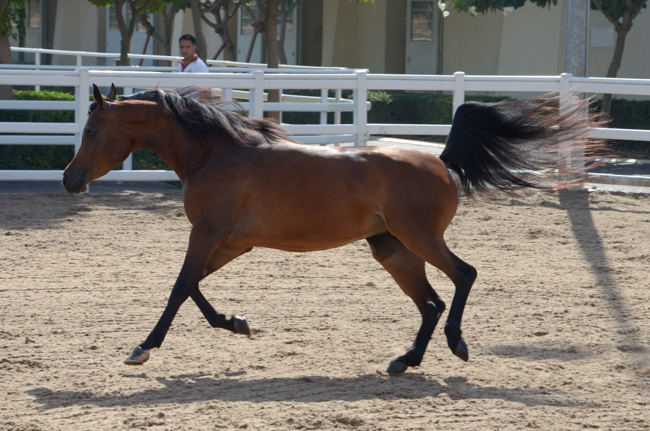 Our second day in Doha started with a visit to Al Shaqab, a premier show and breeding location for Arabian horses in the Gulf States. I expect I was the only person in our group who had ever heard of it before and I was thrilled to see it. Of the various horses presented "at liberty," I preferred this lovely mare. Why? She reminds me of my Bella, of course!

I was disappointed that we didn't get to visit their endurance training area, but it might not have been interesting to the non-horsy folks. 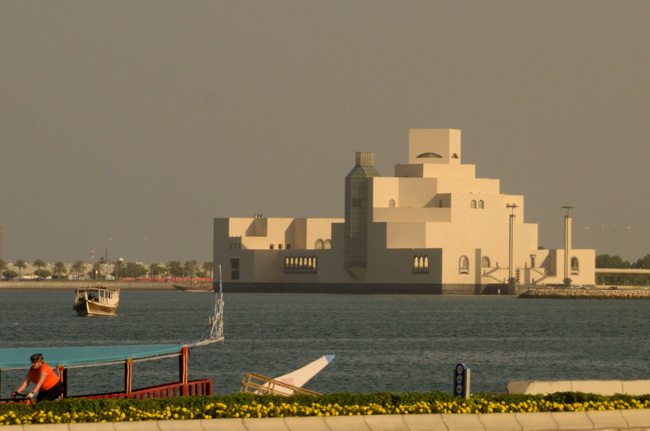 The afternoon's highlight was a visit to the Museum of Islamic Art. The collection was superb, but the  building itself is one of the last major works by I. M. Pei. The exterior is beautiful and the interior spaces are breathtaking.

One of our lecturers, Professor Tarek Swelim, prepared us for this visit with an overview of the architectural design process.

The next morning we were in Bahrain. A sizeable contingent of our companions departed early in the morning for Saudi Arabia. We elected to skip that excursion. That turned out to be an excellent choice because they spent much of their time waiting at various border checkpoints while we enjoyed the morning touring Bahrain.

The Qal'at al-Bahrain, the original settlement area on the island, dates back to the ancient Dilmun civilization. Fresh water springs are the key to the long occupation of this island, which some maintain was the prototype for the Garden of Eden.

The towers of modern Manama are in the background. 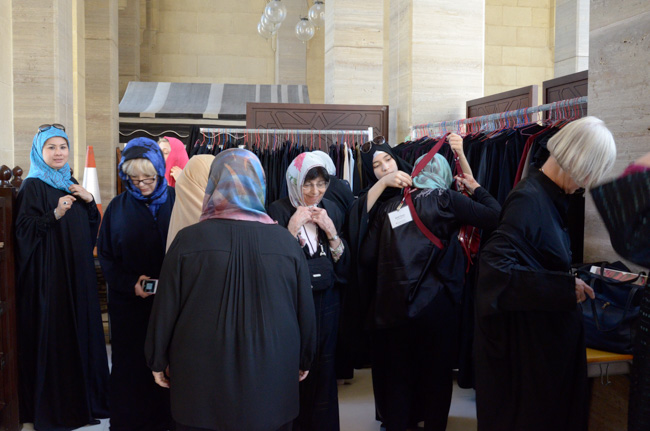 The Al-Fateh Grand Mosque required all of us ladies to don one of their extensive selection of abayas and headscarves. Gents of course did not have such a requirement, although there was a dress code for them as well.

We saw many mosques on our travels. The various jurisdictions strive to outdo each other in the size, lavish decoration, etc. of their places of worship. The guides at each of them also tried to overcome the negative image of Islam rooted in vicious terror groups claiming the mantle of jihad. Although it was great to hear sincere Muslim individuals decry the violence of the few, I would prefer to see the greater Muslim community rise up and denounce ISIL, the Taliban, and other extremist factions.

After lunch we "set sail" to return to the UAE for our next port of call: Abu Dhabi, the UAE capital. Our departure was delayed by the late return of the Saudi contingent, but they eventually grumbled onboard. 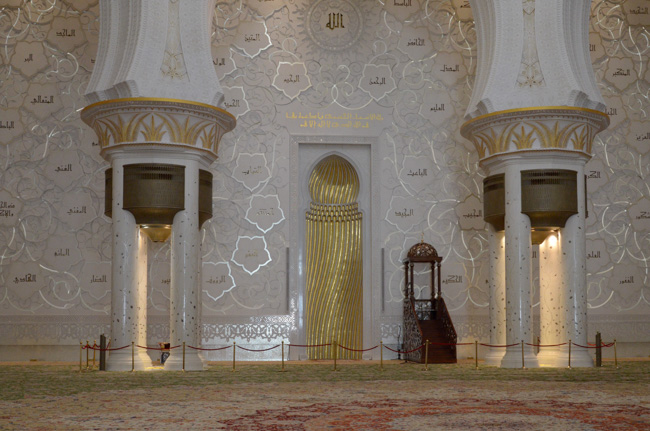 We didn't have to don abayas here, but I did get sent back to the bus for my raincoat because my lightweight long-sleeved sweater was deemed "transparent" by the morality police. One other lady in our group had the same challenge, but our leader had brought a spare abaya or two so she was able to pass muster.

The shape of the mihrab amplifies the voice of the prayer leader, who faces away from the congregation toward Mecca. Nowadays electronic amplification makes this unnecessary but the tradition continues. 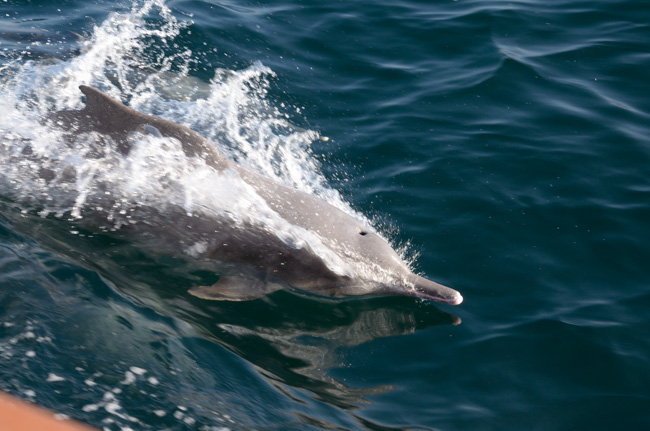 Overnight we sailed to the Musandam peninsula of Oman. This enclave jutting out into the Strait of Hormuz is separated from the rest of Oman by the UAE. It has a culture all its own.

In the morning we explored the craggy fjords from large motorized dhows. Our goal was a snorkeling site, but on the way we encountered a pod of endangered humpback dolphins. They even included a mother and her young calf.

The snorkeling location was Telegraph Island. It contains the remnants of a 19th century repeater station used to boost the telegraph signals on the London to Karachi cable.

As we returned from our expedition we passed Iranian smugglers headed home in a small fast boat. Since the smugglers pay all applicable Omani taxes, our guides told us that their operations are pretty above-board, at least in Khasab. They gave us a big wave. 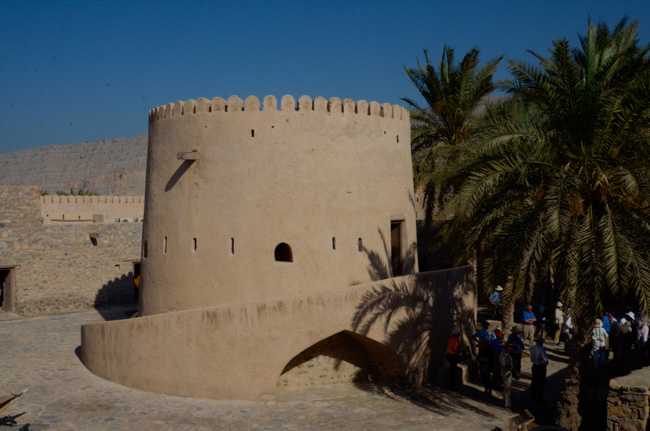 Our next destination was Khasab Castle. Museum displays showcased traditional lifestyles of the area. Two that I particularly liked were varying responses to the intense summer heat. One was a store house dug into the ground. The other was a raised platform dwelling with walls and flooring of open-weave palm branches. Two very different styles with the same goal. Caves are also popular with traditional inhabitants.

We loaded into buses for a short excursion into the countryside to visit a small village. 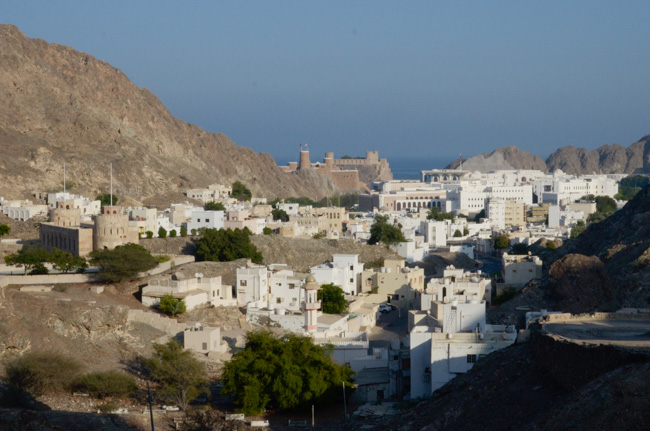 The following afternoon we arrived in Muscat. Two fortresses guarded the original harbor. They are in the background. The Al Mirani fort is closer and Al Jalali is behind it. Neither of the forts is open for tours. Dang!

The Sultan Qaboos Grand Mosque was the highlight of the last day's tour with the full group. It was not the largest or the most opulent of the mosques that we visited, but it was the loveliest.

It is the only mosque in Oman that is open to non-Muslims. 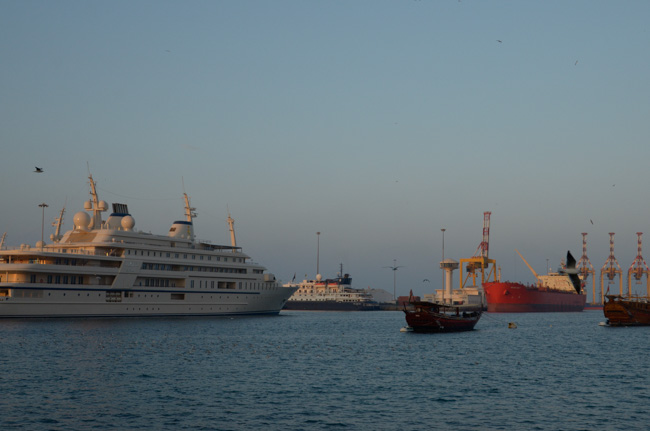 The next day we bade the Island Sky and many of our companions goodbye. Jim and I continued with the post-trip excursion into Oman, most of the passengers returned home by various routes, and the ship proceeded to the Indian Ocean with a new set of travellers.

Our ship is in the new harbor: the Sultan Qaboos port in Muttrah. The Island Sky is the small blue and white ship in the background. The larger white ship in the foreground is the Al Said, one of the sultan's yachts. The newer Fulk Al Salamah, even larger, is on the other side of it and isn't visible from this angle. 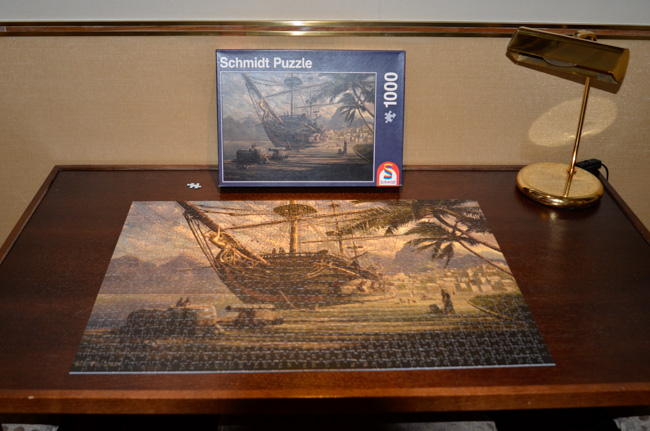 The last thing that I attempted to do on the ship before leaving was finish this fiendish jigsaw puzzle. Several of us had worked on it over the voyage and it was almost done. At about 10pm I decided to bag it and get some sleep. The next morning, magically, it was completed!

We expect a bored crew member with night duty finished it up. Whatever the answer to the mystery, I'm glad it got finished. In spite of our unanimous agreement that many pieces were missing, they were all there. There was even an extra!