After bidding bon voyage to Agathe and our fellow Road Scholars in the morning, we took the subway to Croix-Rousse to join our friend Carl and his friend Christiane, a talented sculptor, for more exploration of Lyon. Christiane ancestors had long been involved in the textile trade in Lyon. Carl and I worked together for years at Tandem Computers. He lives in California, but often comes to visit Christiane and we had arranged to coordinate schedules. 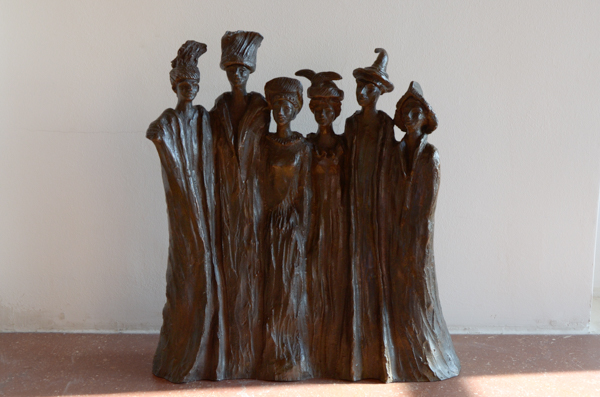 Carl met us at the subway stop and led us the few blocks to Christiane's apartment in a building overlooking the Presqu'île: the main downtown of Lyon. It was hazy, so I don't have a good picture, but she said the nighttime view was spectacular.

A number of her small bronze sculptures were on display in her apartment. This one is called The Comedians. In addition to her own work, she had other striking artworks on display -- many of them textiles.

At my request we walked down to the Sâone to stroll along the banks. I had been struck by it during our various tours.

This image looks upstream toward the Jardin des Chartreux (on the upper left side of the image) where we stopped the night before as a break from our bus ride. The small house above the rampart was dedicated to Ahmadou Kourouma, who was born in the Ivory Coast and died in Lyon. I don't recall if he had actually lived in the house.

Along the opposite side of the river are underground parking garages. As in many large cities, even with excellent public transit, there are too many cars and parking is at a premium. We are walking along the promenade shown on the right of the image. Christiane said that the corresponding promenade on the Rhône bank was larger and better landscaped. We didn't have time to walk all the way down to the Confluence to check it out. Next visit. 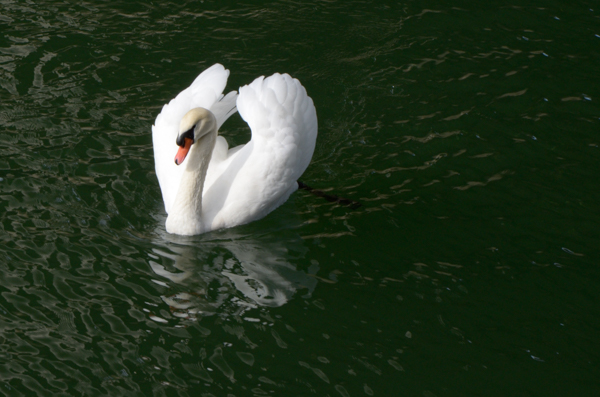 We passed a group of fishermen along the banks. They were surrounded by a number of swans, a few of which were showing off their lovely wings.

There were many small fish visible in the water, but the fishers didn't appear to be having much luck catching larger ones. 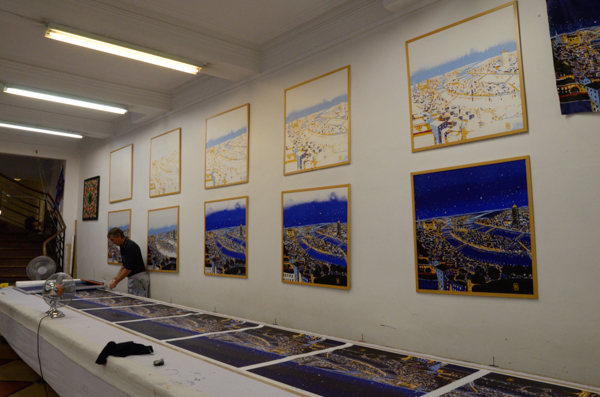 Their specialty is reproducing paintings in cooperation with the original artist or owner of a painting. When we arrived they had just finished a series of prints of the picture displayed on the wall.

The display shows the sequence of prints needed, each of which requires a separate screen. This particular image requires ten precisely aligned screens to complete. 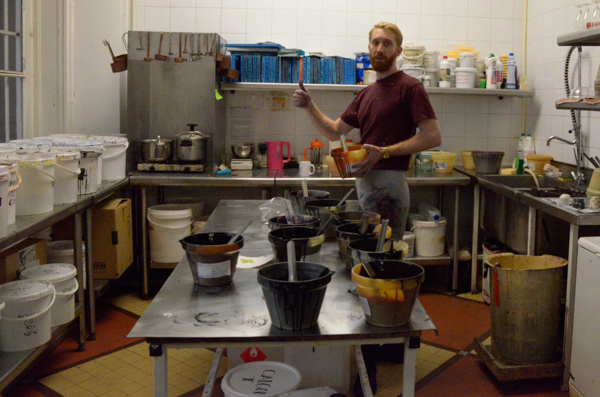 The head of the atelier gave us an overview of the process and described how the dyes were produced. It usually takes many experiments to get the colors exactly right -- particularly when multiple colors are printed onto the same part of the fabric. They may combine in unexpected ways.

Once the silk is printed, it must be washed to remove the mordant used to thicken the color and make it workable, and then it must be treated to fix the color. Each of these processes may change the resulting color of the images, which will send the designers back to the "coloring board."

It makes it easy to understand why the resulting fabrics are so expensive! 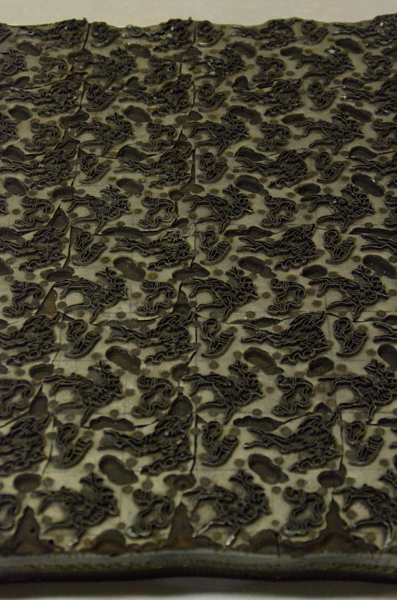 He then took us into another room to show their collection of printing blocks. It was almost as large as the collection that we had seen at Souleiado earlier in the trip.

Some of the blocks were designed to be built up of smaller pieces such as shown here. The individual pieces have an irregular outline that gives the overall pattern some security. 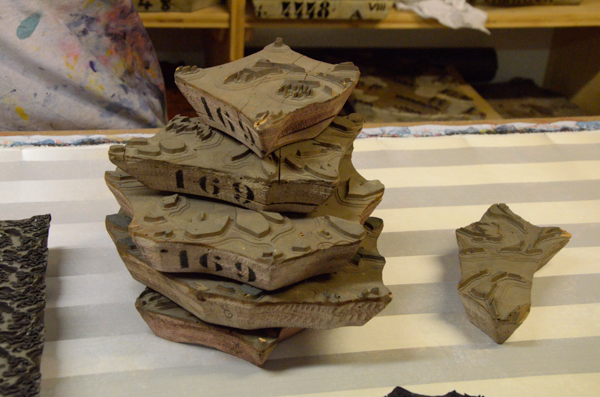 This set of blocks has a highly irregular shape. Our "guide" said that they had not yet completely figured out how it should be assembled, or even if all the pieces are present. They simply have not had time to delve into this aspect of printing due to the press of their more traditional work.

My fingers itched to have a go at putting this puzzle together! 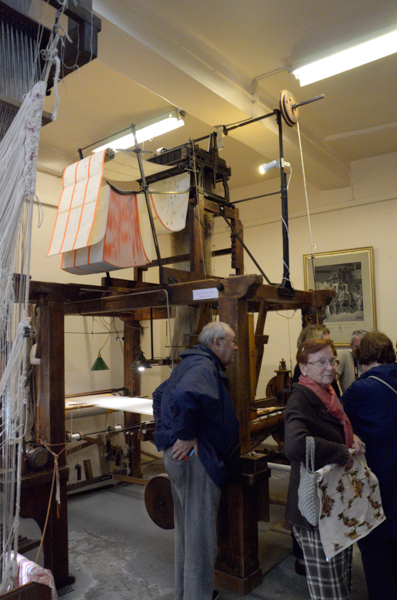 After visiting the atelier, we took the subway back to Croix-Rousse to join the scheduled English-language presentation of the looms at Maison des Canuts (the English-language version of the site has vanished). As it happened, we were the only English-speakers and there was a French tour in progress (according to the information at the above link, they have also abandoned the attempt to run English-language tours).

This Jacquard loom is considerably larger and more complex than the smaller model we had seen earlier. As the discussion at the link illustrates, the Jacquard head can actually be used with any loom. It is still used today.

It takes a considerable amount of time to produce the punched cards for a particular design, but once they have been produced, they can be filed and reused. It also takes a considerable amount of time to set up the loom for a particular pattern, but once it is set up, complex patterns can be woven with relative ease and accuracy by a single weaver. 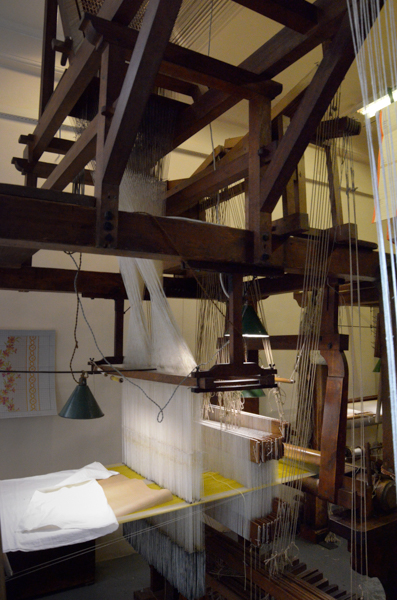 In the same room as above is an earlier drawloom. It requires two people to operate and could not produce as complex designs as the Jacquard loom.

The actual loom is similar, but the mechanism for manipulating the warp threads is very different. 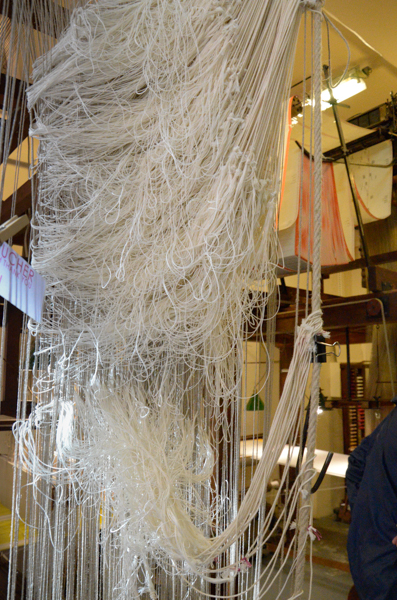 No, this is not a rat's nest -- it is the control mechanism for the loom above.

We actually saw this loom in operation during an earlier visit to the museum.

It is easy to imagine that the Jacquard loom with its punched cards was a breath of fresh morning air after this nightmare. 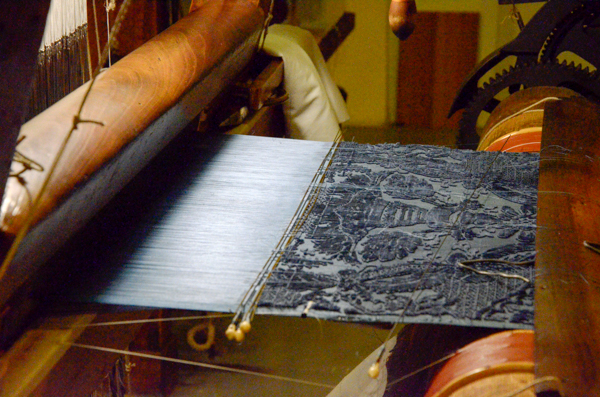 The fabric being produced on a different loom is what we used to call "cut velvet." I expect it has a more exact name, but I don't know what that might be.

The loom produces two thicknesses of fabric that are then cut apart in the center.

After viewing the looms, we separated to get ready for dinner. We agreed to go to the Paul Bocuse Brasserie Le Sud. It specializes in Mediterranean style food. The food was good, but they put us in a smallish room with a large office party. The noise was deafening and we were unable to converse. A disappointment! There is much more to dining than the food.