After our visit to Vienne, we proceeded towards Lyon. Our first stop was the ancient aqueduct of the Gier, one of four that supplied the city of Lyon (Lugdunum) during Roman times. Additional general information about Roman aqueducts can be found on Wikipedia.

In the evening we were supposed to have dinner at the hotel restaurant, but exceptionnellement, the chef was sick. The hotel recommended Brasserie Georges, which has been part of the Lyon culinary scene since 1836. It was definitely an experience, but I don't believe it made it onto Agathe's list of places to include in the next tour. 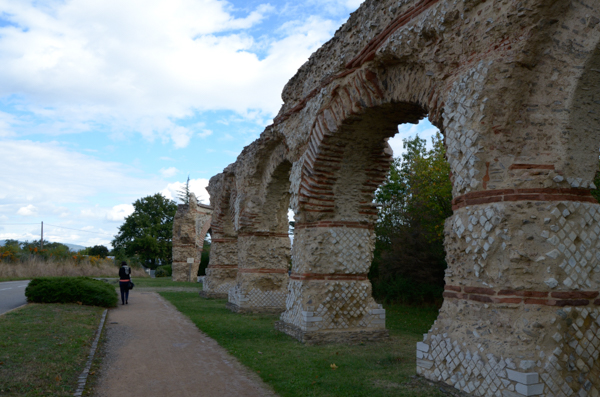 As noted earlier, Roman masonry construction alternated brick and stone to provide resilience. In this case, the internal structure was faced with decorative tile, much of which has fallen away.

The source of the water was the Gier River, which we had seen at Vienne. The aqueduct started on the slopes of Mt. Pilat 26 miles away. (The name of the mountain may (or may not) arise from a tradition that Pontius Pilate was buried there.) The length of the aqueduct is 45 miles and the fall is only an average of 1 meter per kilometer. The gradual slope kept the water moving, but not so fast that it could tear apart the structure.

As can be seen here, the aqueduct turns a corner to the right not far ahead before it crosses a deep valley into the city.

The Romans built structures such as this using concrete to bind the stone and brick. 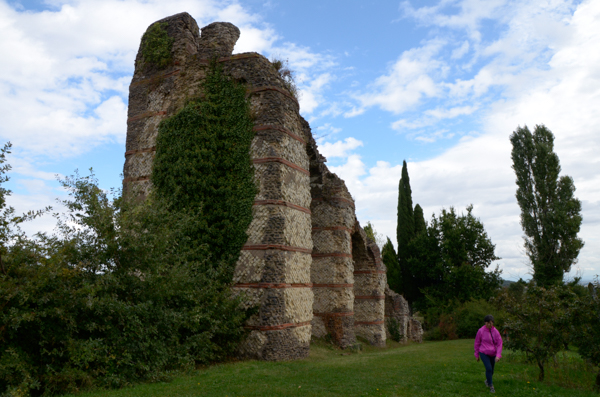 Huge tanks built into the structure acted as reservoirs to maintain adequate water pressure as the water flowed through lead pipes into the valley and up the other side.

This tower contained one such tank. 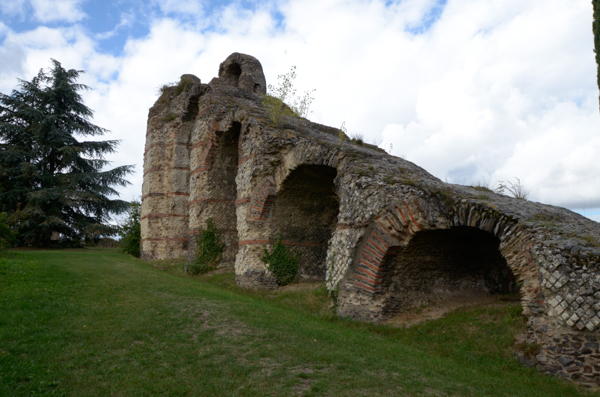 The beginning of the decline into the valley. Pipes ran on top of these arches.

Another tank on the opposite side of the valley received the water so that the pressure could be re-regulated.

The channel at the top that carried the water is lined with red waterproof hydraulic cement. We were to see it elsewhere. 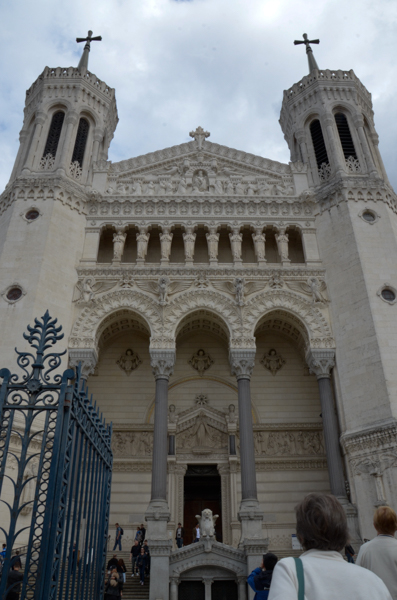 After visiting the aqueduct, we drove more-or-less to its terminus: the hill of Fourvière. Lunch was in a restaurant with a magnificent view over the city of Lyon. Afterwards we visited the basilica of Notre-Dame de Fourvière.

This iconic church is not old. We have visited the area many times, but this was the first time we went inside the church. 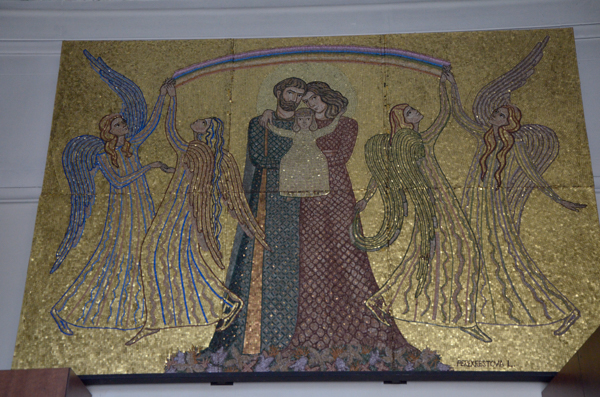 This mosaic of the Holy Family reminds me of Jugendstil mosaics that I saw years ago in Germany. The artist is Larissa Perekrestova from Odessa. 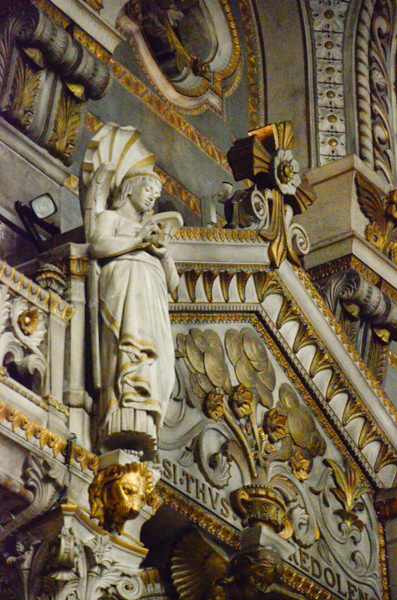 The interior decoration is exuberant.

Many decorative elements on the outside of the church are unfinished due to lack of funding.

After visiting the basilica we walked to the Roman theatre. Like the others we visited, it has been restored for modern performances. 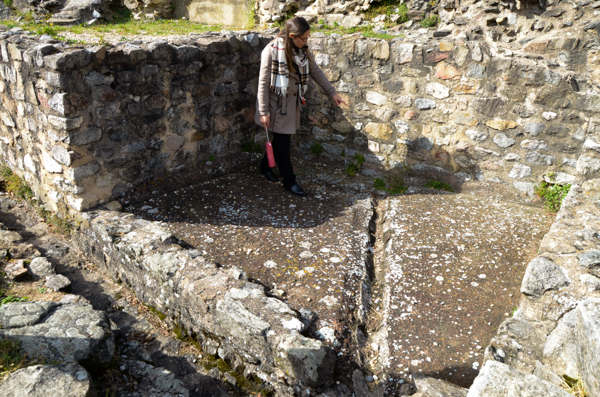 An ancient roadway ran behind the theatre. Several small "concession stands" faced it. Back in the day these sold carry-out food or souvenirs.

Our guide explains that this particular stand probably sold food. The diagonal trench, which discharged into the adjacent sewer, enabled the operator to clean up every night with ease. In its heyday the sewer trench was covered with stones.

The restrooms were located on the far side of the theatre, so I this was not a stinky sanitary sewer. 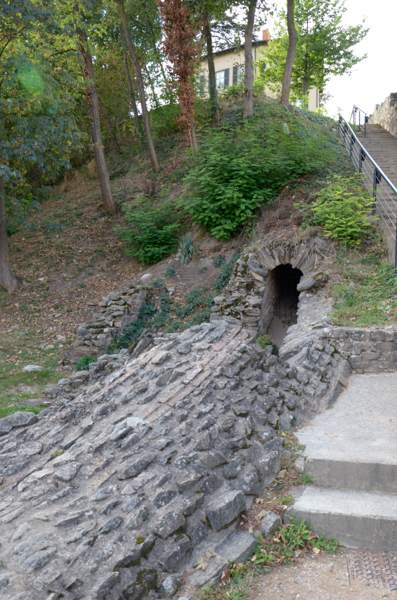 The Roman sewers had a flushing system. I forget whether this particular channel was part of the "flush" or if it was simply the outflow from the Gier Aqueduct, which ended near here.

Our guide described the elaborate construction of the terminal tanks which included a "settling basin" designed to capture sediment.

Someday when we return to Lyon, I want to try to trace the entire length of the aqueduct.

Some friends disdain traveling with "tour groups" because they find it constricting. I find that the groups we've traveled with have greatly enhanced our experience. We've been to Lyon more than once (great city!) and have visited this particular site several times without taking away nearly as much information and interest as we did this time.

I just wish I could remember it all! 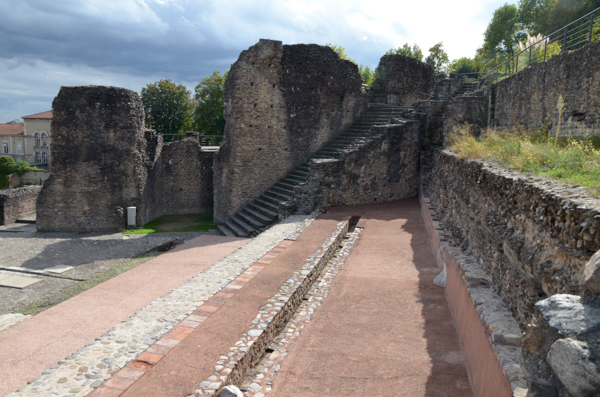 Speaking of sewers, there was a Roman latrine next to the theatre. Latrines were communal places with no privacy. People discussed business and other topics while they were otherwise occupied.

There would have been a structure of seats above the latrine outflow. I don't know if the latrines were separated by sex or not. It probably varied from place to place.

Roman cities were much more sanitary than medieval ones. 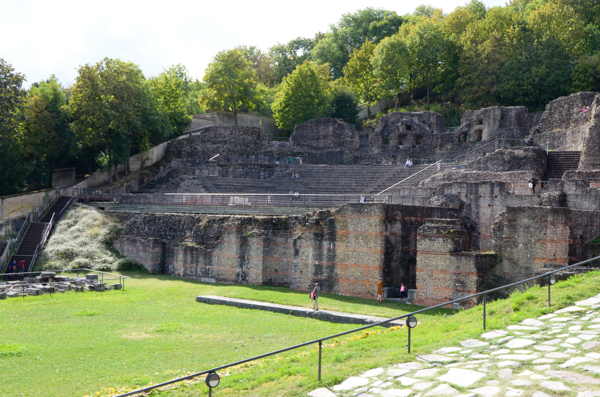 A smaller, more exclusive theatre, adjoined the larger one. There was a similar small theatre in Vienne.

After visiting the Roman ruins we took the funicular down to Vieux Lyon. One of our first sights was the cathedral of St. John the Baptist. 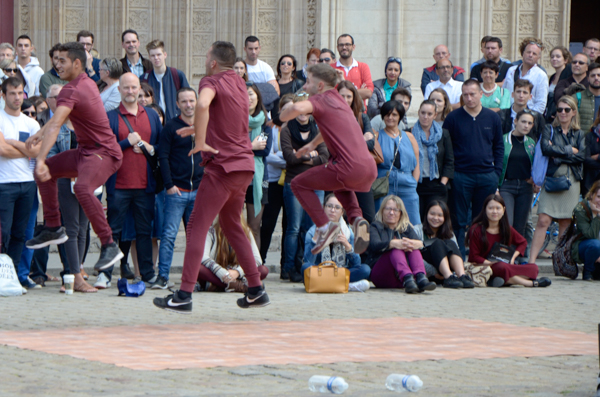 We didn't visit the cathedral, but I was amused by this trio of dancers performing for the assembled crowd. White men CAN jump!

The Maison du Chamarier dates from the 15th century. It has been restored after centuries of decline. There wasn't enough time to visit the interior so we just observed the courtyard, which contained an elaborate well.

The design of the house was typical of its day. 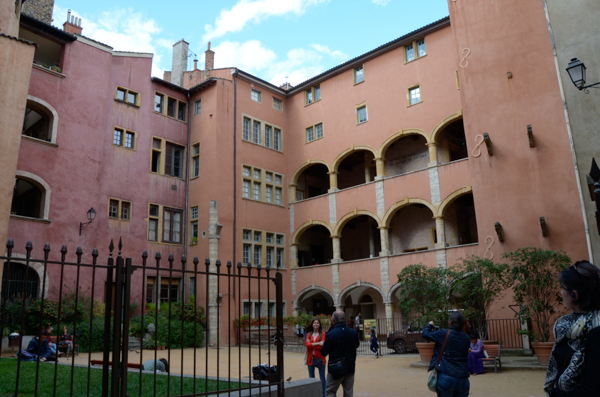 The Place de la Basoche, has also been restored. Basoche was an ancient brotherhood of lawyers beginning in the early 15th century (according to a plaque at the site).

This area of old Lyon had fallen into slums and it was only in the 20th century that these old buildings were resurrected. The plaza was formed when a building was demolished in 1968 because of unsanitary conditions. There had been a movement to tear down the entire area (good old "urban renewal!"), but the then Minister of Culture, André Malraux, pushed for restoration instead.

One of these buildings is now "The Lawyers' House." It was purchased and restored by the lawyers themselves and now houses their regional training center. Seems appropriate!

A (mostly) unique feature of Lyon is the many traboules -- pedestrian alleyways leading to residences tucked behind other buildings. We visited this "Long Traboule," which wound through four different buildings as it passed from one street to the other.

A sign on the balcony asks visitors to respect the privacy of the residents and to keep the noise down. The traboules where residences are located are only open during the daytime. They are entered by doors that are locked at night to keep non-residents out. Many of the apartments located on traboules are low-rent or subsidized.

In the Croix-Rousse section of the city, the traboules were used mostly by textile workers and were less residential. 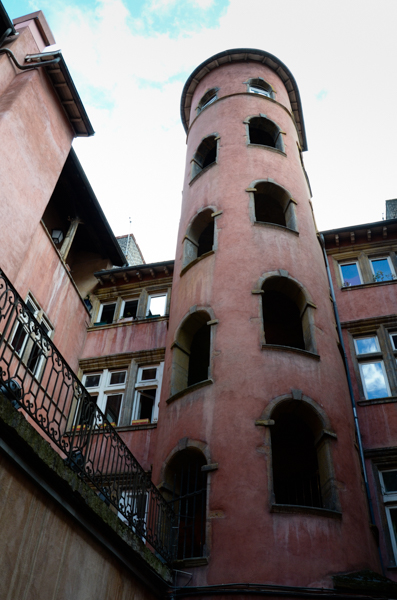 We also visited a courtyard containing this striking pink tower.

I'm sure we were told when it was built and what it was used for, but I no longer remember. All I can find on the WWW are similar pictures with no further explanation. 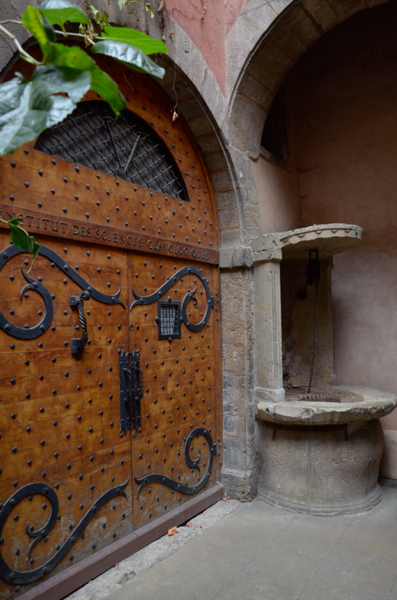 The "Institute of the Science of Nails" is also located on the same courtyard. The only web reference that I found is in French. The "Order of the Nail" was formed in the mid-20th century to bring together amateurs of humor! It specializes in feasts & hoaxes.

The door is fabulous.

The well is a common feature of Lyon courtyards. 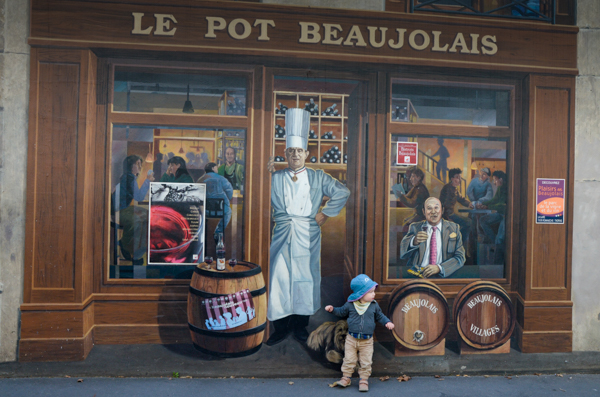 After leaving the old city and driving around town a bit, we visited one of the murals of Lyon. The movement started in the 1970s when a group of art students decided to get art out of museums and into the city. They travelled to Mexico to study with muralist Diego Rivera and have never looked back.

I had to get this picture of Paul Bocuse. The child is the only thing that is not part of the mural. He was entranced by it and kept running back & forth, full of giggles, between the painting and his parents.

After the murals we checked into our hotel where we stayed while we enjoyed the surrounding area and participated in another cooking class -- at the Paul Bocuse Institute!