The next morning we awoke in Vienne (pronounced either like Vienna or like vee-ENN - we heard both). This ancient town dates to the first century BC. The Van Gogh proceeded on to Lyon, but we left the boat here and spent the day exploring Vienne and other sites on our way to Lyon. 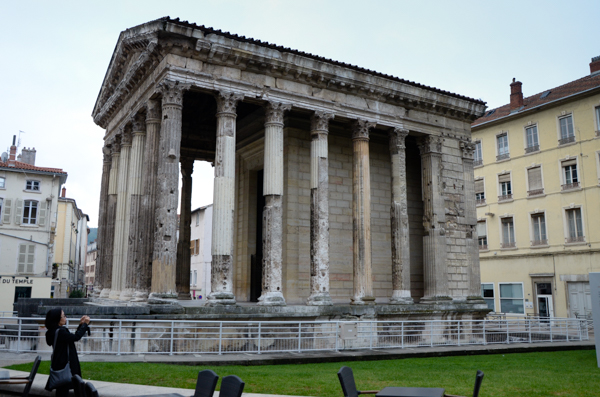 Although Vienne has extensive areas from medieval times, we focused on the Roman heritage.

In the 19th century it was restored and the central sanctuary rebuilt.

A surprising sight at one spot in the surrounding square was a plaque dedicated to Thomas Jefferson titled "a symbol of French & American amity." It had been placed in 2009 on the 220th anniversary of the French revolution. There was no indication that Jefferson had ever visited Vienne. 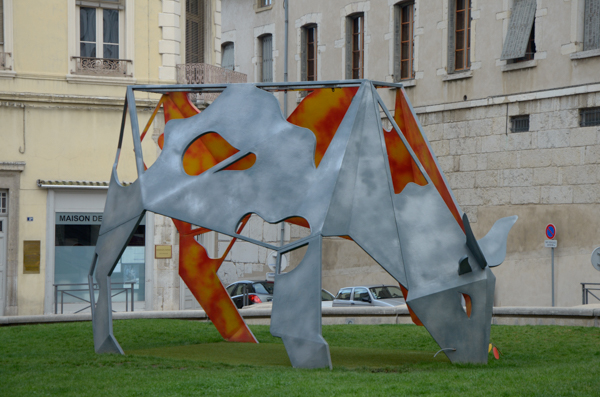 Also located in the square was this sculpture of a cow, placed in honor of Yoplait, which has a major plant in Vienne. 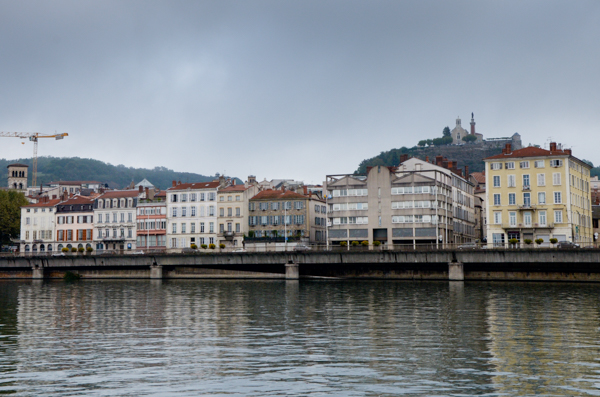 One of the benefits of travelling with a very small group is that no time is wasted getting travellers in and out of large buses. Additionally, our small van was able to drive us to places that we otherwise would have reached by walking.

As a result, we had time on our hands in Vienne before the museum, our next stop, was open. After some discussion we decided to visit Mont Pipet, shown here behind the modern city buildings. The church on top is called Notre-Dame-de-la-Salette. It commemorates an appearance of the Virgin Mary in a nearby town. The views over the city from the height were extensive. 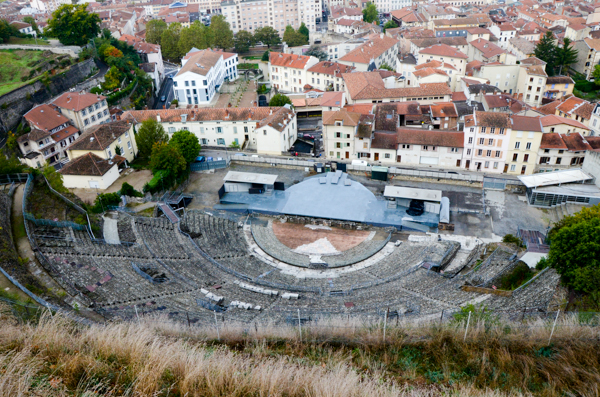 The partially restored Roman theatre is used for performances. 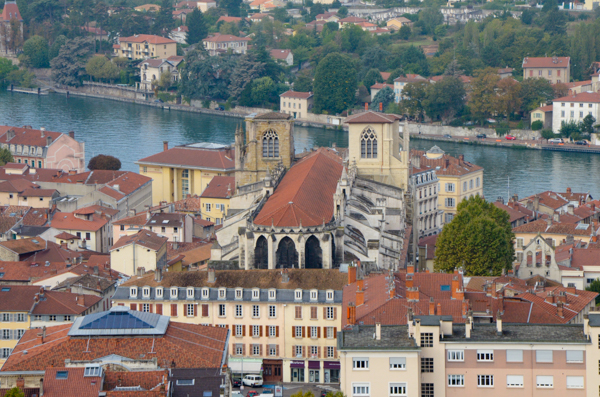 The cathedral is dedicated to St. Maurice.

Two different types of stone were used over the several hundred years of construction. The older stone was harder than the newer stone and hence the newer parts of the church have deteriorated more.

We did not visit it. 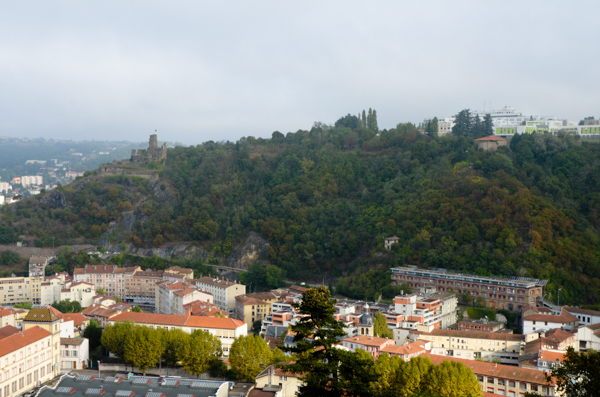 Looking upstream, the ruins of the medieval Chateau de la Batie are visible on the left flank of the hill. The long building to the right at the base of the hill is an old silk mill situated on the Gere (or Gier) River, which joins the Rhône here.

As we will learn in Lyon, this area was once the center of a thriving silk industry. 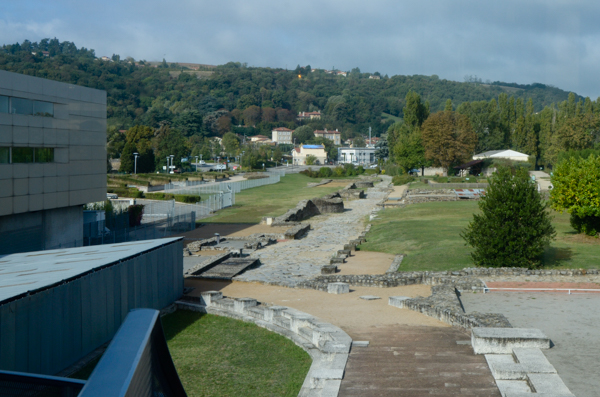 The high point of our stay in Vienne, however, was a visit to the Musée Gallo-Romain (English translations are available after the French text).

Many years ago the city planned to build a school on a site across the Rhone from Vienne. When contractors started excavation they uncovered a mosaic tile floor. Further analysis determined that it was the site of a large and elaborate villa dating back to the Roman times.

The school was constructed elsewhere and a museum built around the Roman remains. It displays not only the actual mosaics, but also models and other information describing Roman home design.

Every year a festival of Roman life draws enactors from as far away as Italy. Vienne has joined our list of places we would like to revisit.

We didn't have time to visit the exterior remains contained in the adjacent park. 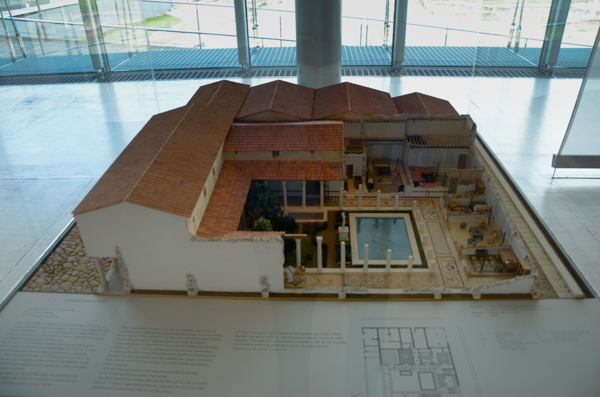 This model of a typical Roman villa shows the layout of the various rooms around the central atrium with its pool. 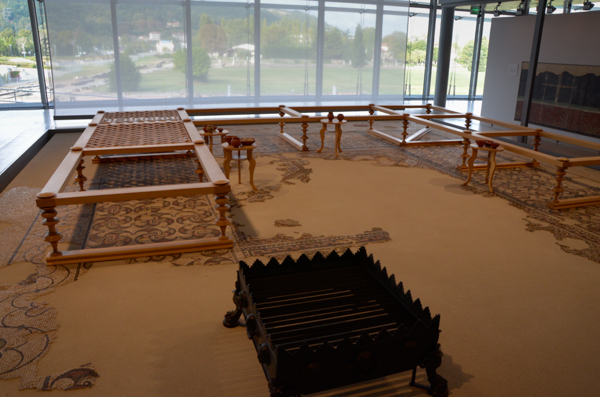 A reconstruction of a dining room illustrates couches arranged around a central area. The Romans dined while reclining on such couches. The mosaic patterns guide the placement of furniture. Elaborate patterns decorated open areas, but places covered by furniture were simpler in design. Or so they said.

The black brazier was excavated at the site. 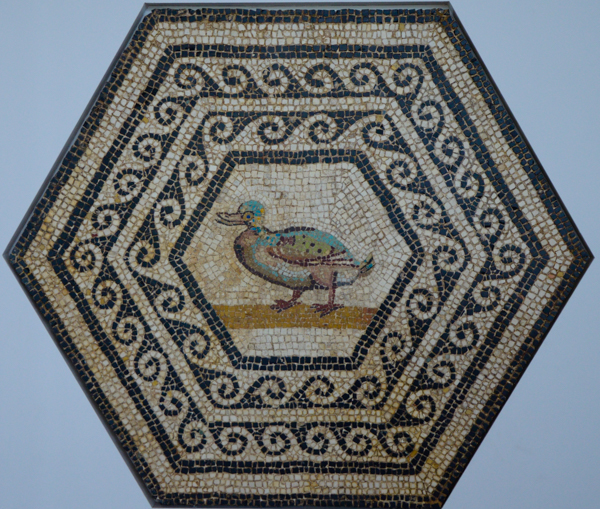 This duck shows how detailed some of the designs were.

When such sites were first excavated, archeologists were not careful to retain the context of decorative patterns. They removed decorative medallions such as this one from their context resulting in the destruction of clues that could tell us more about the patterns of everyday life. 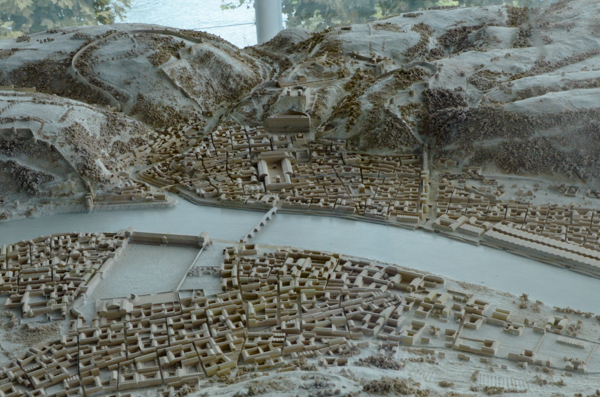 This model of the supposed extent of Roman Vienne  shows how large it was. As I recall there were subtle color differences that showed buildings and sites that had been established by excavation and those that were speculative, but it isn't possible to see the differences in this image.

The long buildings toward the right were warehouses. Vienne was an important shipping center. Behind the warehouses was the hippodrome.

The large open space at the far end of the bridge is the forum. The theatre that we saw earlier is on its far side.

The large open space on this side of the river is a bath with a swimming pool. The location of the museum is to the left of this pool.

This is a reproduction of a Roman river boat. I don't remember if it is actual size or a scale model. The jugs are amphorae, which are awkward to transport. Barrels were developed sometime along the way and began to be used for storage and transportation. There were several advantages, notably ease of movement (rolling) and stacking. Moreover barrels were much less likely to break than clay jars. 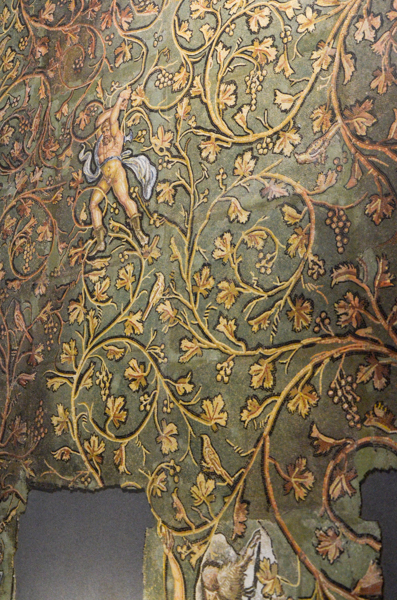 The most elaborate mosaic in the museum is this floor with its floral design. It was excavated in the early 20th century and stored in boxes until it could be reassembled many years later. When reassembly began, several boxes were missing. This is the reason for the rectangular missing pieces.

Jim and I both had a mental image of the final scenes of Raiders of the Lost Ark where the priceless ark is taken into a vast storeroom never to see the light of day again.

The curators hope that someday the missing boxes will be found since there are still many more in storage.