The boat's first stop was in Avignon. Its management had revised the schedule and no longer allowed as much time in Avignon before moving on again. Agathe scrambled to develop a "Plan B" to get our scheduled tour. Mouhi and his van originally had the day off, but we are thankful that he was available to pick us up after our visit to the city and drive us to meet the boat at its next stop. 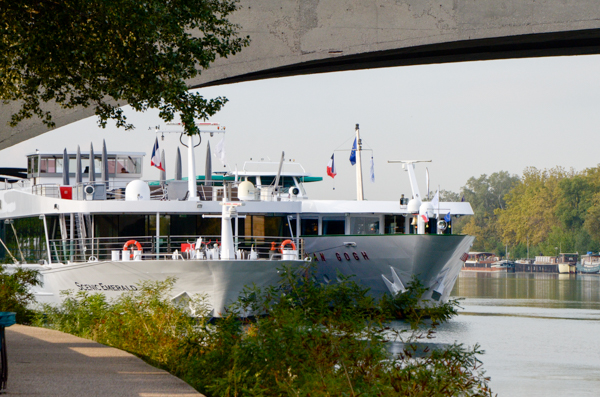 The MS Van Gogh tied up alongside another boat, and we trooped through our neighbor to get ashore. This is a common arrangement on other river cruises we have subsequently taken. 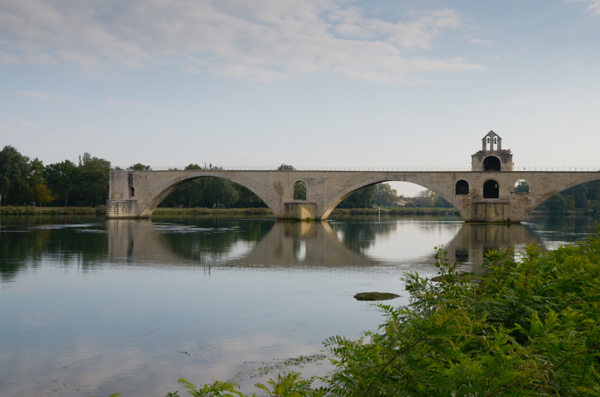 The Pont St. Bénézet is familiarly called Le Pont d'Avignon. Agathe was sure we would all know the popular French children's song about this bridge, but she was met with five blank stares. She insisted on coaching sessions so we could sing as we visited the bridge! The song dates to the 15th century. The bridge is even older. The first bridge in the location was built in the 12th century. This iteration dates to the 14th century. Rhône floods continually damaged it and the bridge was abandoned in the 17th century. Only four of the original 22 arches remain.

The river runs on both sides of the Ile de la Barthelasse, which is seen in the left of the image. 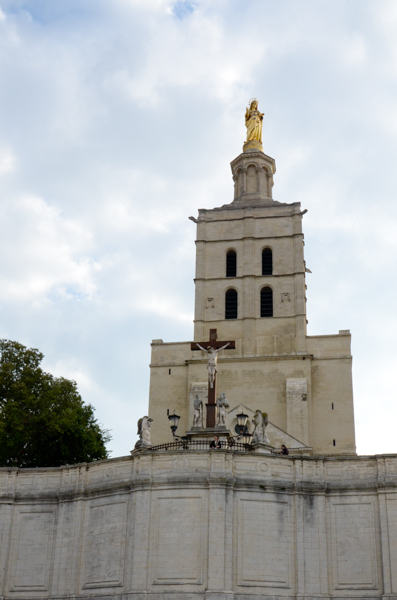 The Notre Dame cathedral adjacent to the palace of the popes predates the Avignon papacy and was built in successive stages. The gilded statue at the top is 19th century. 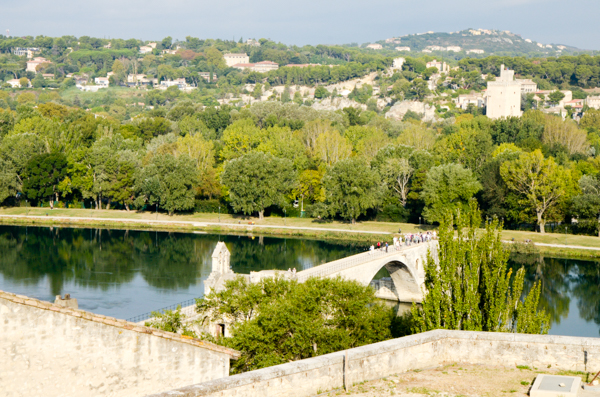 Looking down from the Rocher des Doms over the Avignon bridge. The tall structure on the other side of the river is the tower of Philip the Fair. It marked the terminus of the bridge on the far bank of the river. In medieval times the land on this side of the river was Provence and on the other side was the Kingdom of France. Eventually Avignon was sold to the papacy by Joanna, Countess of Provence & Queen of Naples. The sale was occasioned by, among other scandals, her desire to gain absolution for the murder of her husband.

Nowadays we tend to assume that the boundaries of European countries have always been what they now are, but that is far from the case. 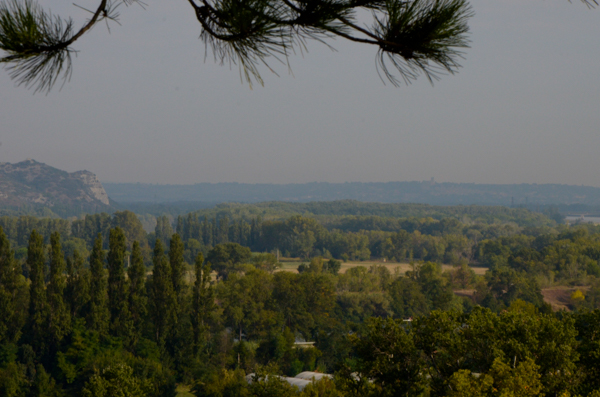 The view toward Châteauneuf-du-Pape. The tower of the château, where we had played pétanque, is barely visible as a blip on the hazy horizon. 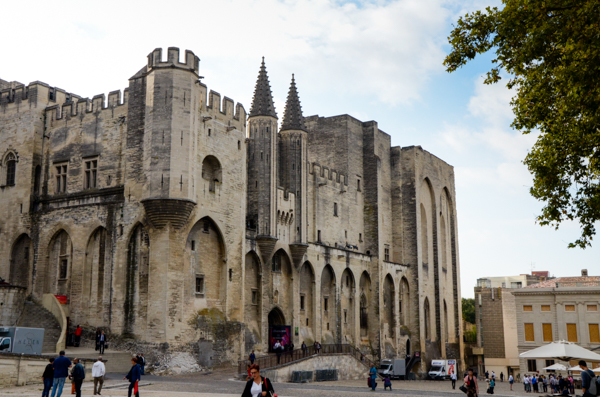 We met our local guide at the main stop in Avignon: the Palace of the Popes. It dates from the time of the Avignon papacy in the 14th century. The palace was built in stages and as with anything else that old, it has been much altered.

Today the building is a tourist attraction, a conference center, and a research library.

It was also a sober reminder that "the church" in those days was more about temporal power than living out God's love for His people. Church and state must remain separate -- otherwise it isn't good for either the church or the state. 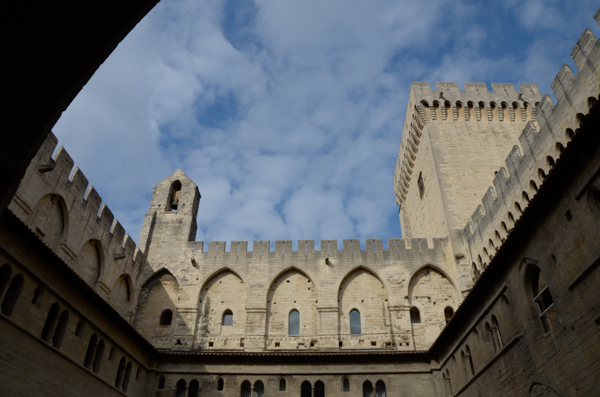 This great courtyard, the Benedict XII cloister, contains remnants of the oldest part of the palace. Benedict was the initial builder.

After the popes returned to Rome, the palace was used for other things. It was considerably damaged during the French Revolution. At one time this courtyard was used for stables. 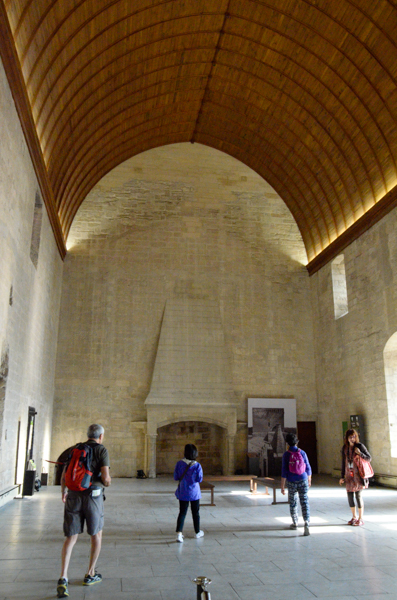 The Great Tinel was the banqueting hall in the days of the popes. It can still be rented for banquets and other functions today. At one time the windows had been bricked up and a 2nd story inserted in its length, but it is now returned to its original proportions. The great barrel-vaulted ceiling is a restoration. When the popes used this room the ceiling was covered with blue fabric & stars to imitate the heavens.

The ceiling is asymmetrical. It reaches lower down on the right side in this view. (No, it is not an optical illusion.)

The kitchens were behind the partially hidden door on the right. The great fireplace served as a warming oven to keep food hot. A partition separated this "butler's pantry" from the main dining area.

The pope's dais was on the opposite end of the hall. It was part of a false wall. When the cardinals went into conclave to elect a new pope, the wall at that end would be opened up allowing access to a set of rooms behind it where they were secluded during the time of the election. 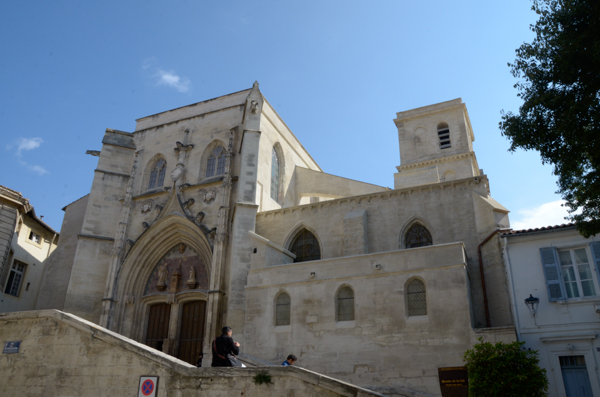 After visiting the papal palace, we had some free time to explore Avignon. There wasn't time to do more than scratch the surface, but we did visit this church dedicated to Saint Agricol, a 7th century bishop of Avignon. The church was built in the 12th century and enlarged in the 15th.

We had also planned to visit a nearby 18th century church, the Chapelle de l'Oratoire. We were seeking a change of pace from the medieval sights, but it was locked. There was a Rotary-sponsored Old Time Jazz Band performance scheduled for that evening! We run into Rotary projects most everywhere we go. 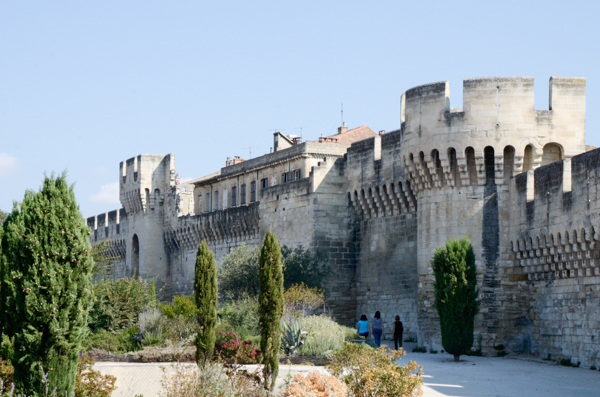 We arrived early to our appointed place to meet Agathe outside the city walls. These are the 14th century walls. Since we had some extra time, I decided to explore. 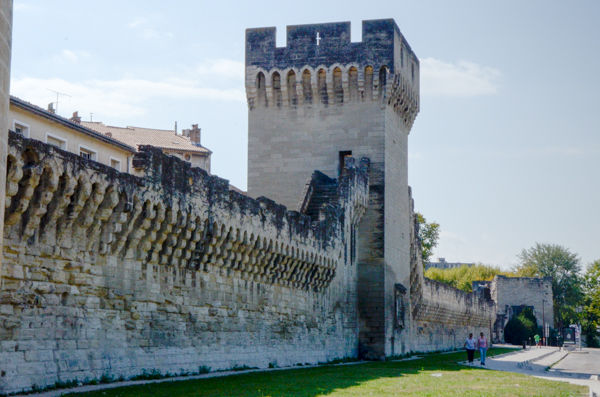 Towers punctuated the ramparts. Crenellations protected walkways leading from tower to tower. At one time a moat surrounded the wall. 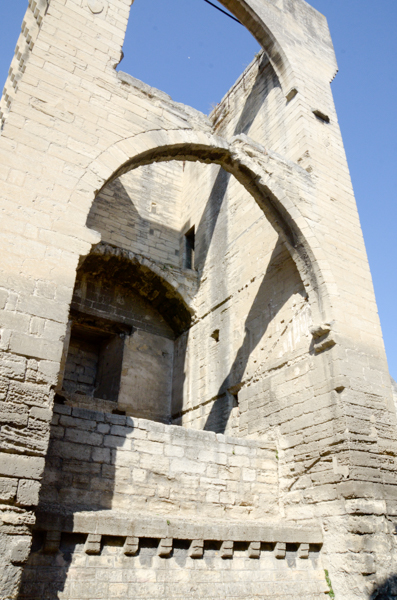 The towers had open backs, which makes them half-towers, but it is clear from the ghosting on the walls that there were multiple interior stories. I know that some of the other towers had roofs so I suspect that this one did too.

I hoped to find some way to get up on the walls, but there was no such luck. Agathe said that in spite of their sturdy appearance the ramparts are fragile and unsafe. Occasionally bits crumble and fall. Best not to have a tourist in the debris. 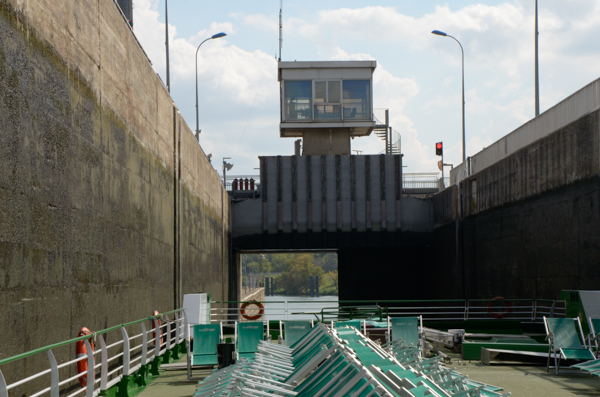 Mouhi met us with the van and drove to the boat at its next stop near Châteauneuf-du-Pape. Once it got underway again we enjoyed watching the scenery go by -- and then we arrived at this lock. The boat passed twelve locks during the course of our journey.

This lock gate slid across the opening. It is half-closed in this picture.

The boat had only about three feet to spare (if that much!) side-to-side. We never had to wait at a lock that we knew of although most of the locks were passed at night. 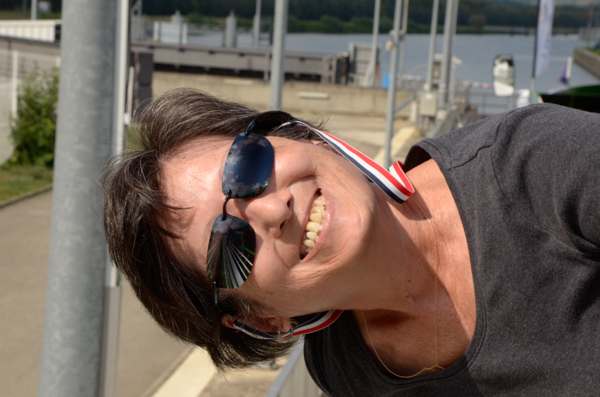 May hamming it up as we're about to leave the lock. 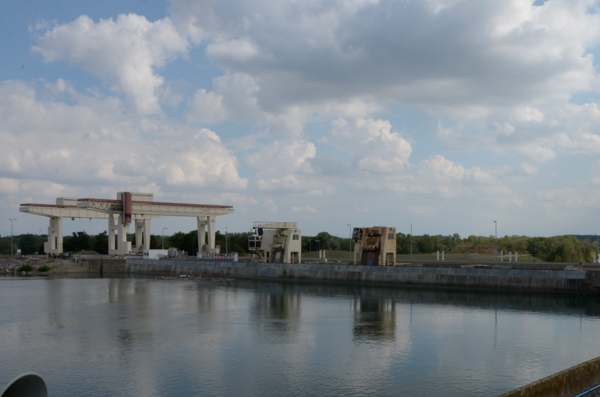 The dam for this lock. All of the dams generate electricity.

As we cruised up the river we joined Agathe in the lounge for a discussion of French gastronomic history and customs. In medieval times there were three classes of people: the knights/nobles, the priests & the workers. Each class ate different things. The workers, who were the lowest class, ate the "lowest" foods: those that touched the ground, for example, sheep, root vegetables & rye. The ground was associated with death & the devil. Knights and priests ate the "highest" foods, e.g., wheat, which grew tall, tree fruits, and birds. These foods were associated with heaven. 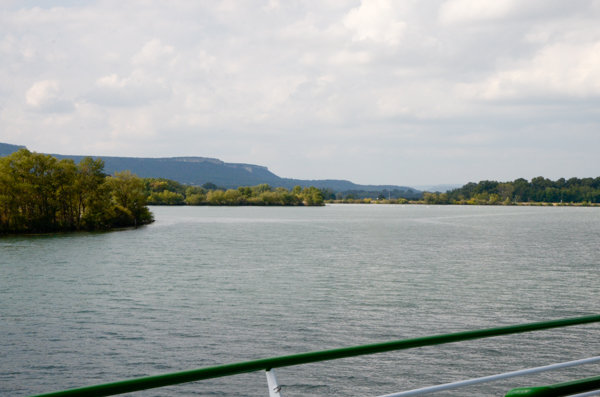 This is a sample of the Rhône scenery that we passed.

More customs... The religious were divided into additional groups. Hermits were only supposed to eat raw herbs. Secular religious ate similar foods to the workers, but instead of meat they ate fish. "Fish," however, included aquatic creatures such as geese and beaver.

There isn't enough space to cover all that we learned, but it was fascinating. UNESCO has honored French cuisine as an intangible cultural heritage.

When we arrived at Viviers, there was an opportunity to explore the village. Jim and I pooped out, but Kent, May & Marilyn enjoyed it very much. They even got an invitation to visit one of the locals and have a glass of wine. (They declined.)