After our repast, it was time to see some sights and get some exercise before meeting our boat, where we would be staying the next three nights. 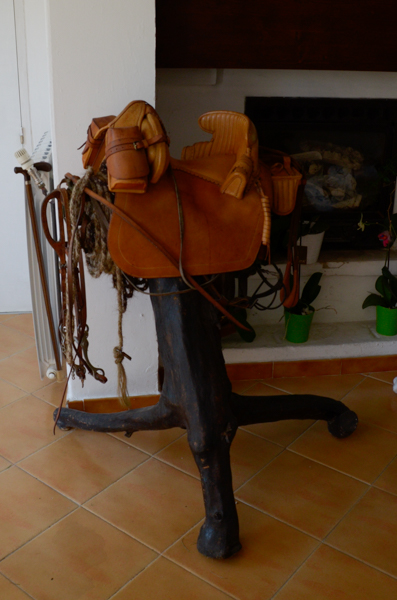 In addition to food, the Camargue is known for its horses and bulls. This saddle was on display at Chef Merlin's. The high pommel and cantle keep the rider secure in his seat as he handles the bulls. Various attachments provide storage for necessary items.

Our afternoon's explorations would include observation of the horses & bulls, but there wasn't time on the schedule for closer investigation. 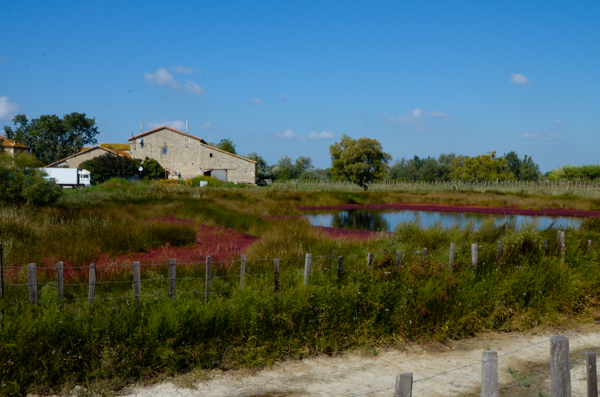 The Camargue, the delta of the Rhône river, was once a vast wetland. Much is drained for farming, rice is a favored crop, and management of the Rhône with dams and levees has diminished the influx of nutrients from periodic flooding. Nonetheless there is still plenty of water and much of the area has been designated a nature reserve.

We had a brief tour along back roads to see the area. Our driver and local guide spoke excellent English -- not surprising since she was from Texas! She came to France to study and acquired a French husband along with excellent language skills!

We enjoyed this vehicle with its big windows and open top. Any time we wanted to stop and check something out, she stopped for us. 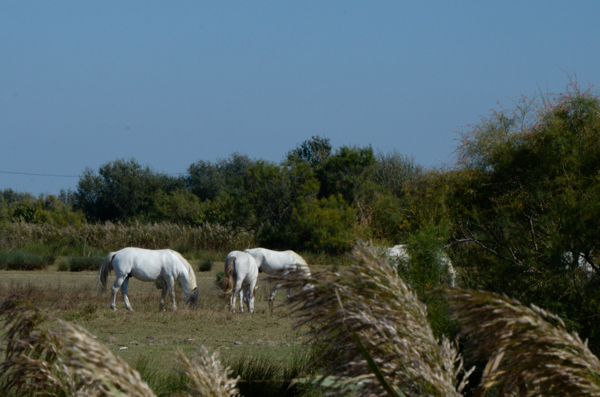 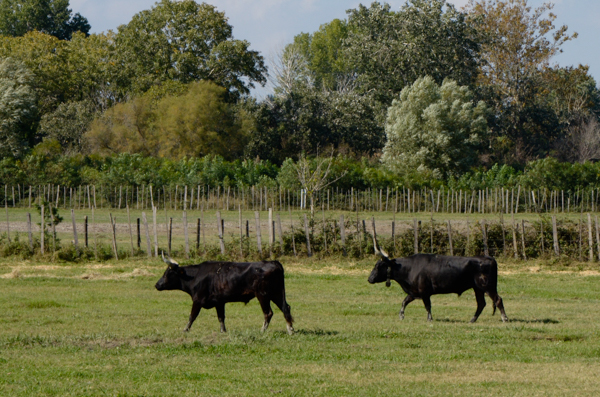 The famous black bulls were much in evidence. They lived quietly together in herds. I don't think we ever saw cows. Perhaps they roam freely like the mares.

Handlers train some bulls, e.g., the one with the bell. He guides the wilder critters where they need to go.

The upright orientation of the horns on these bulls indicate that they aren't fighting bulls in the Spanish style, which have forward-projecting horns.

Click for a description of the French styles of bull fighting. The bulls have decorations placed between their horns and the object of the contest is to retrieve the decoration. The bulls are not intentionally harmed and may appear multiple times and attract a loyal fan base. All of the posters that we saw featured a bull by name -- not some matador or other. 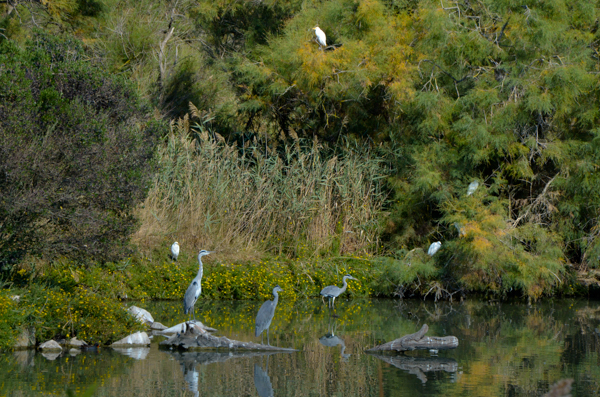 The culmination of our tour was the Parc Ornithologique Pont de Gau. (The link will open in a new tab.) This sanctuary attracts droves of birds who find rest, relaxation, and good eats in the varied terrain. Some are migrating through and some spend the winter here.

Throughout our visit to the Camargue we were admonished to keep up with bug spray -- thankfully Agathe had brought some. The mosquitoes were fierce! 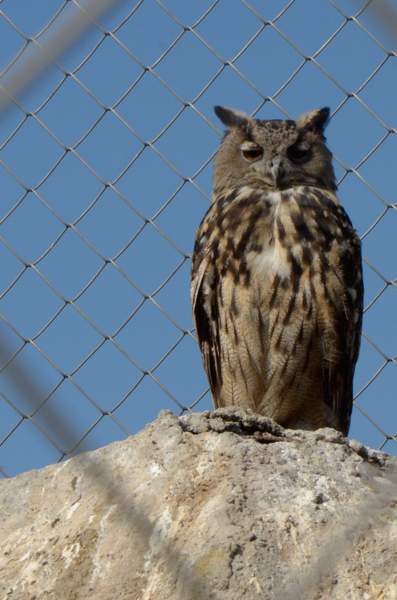 Most of the birds are wild and unrestricted, but there are birds that have been injured and are now being rehabilitated. Some birds have permanent injuries that prevent their survival in the wild. They have a home for life here.

This owl will be released once he (or she) recovers completely. 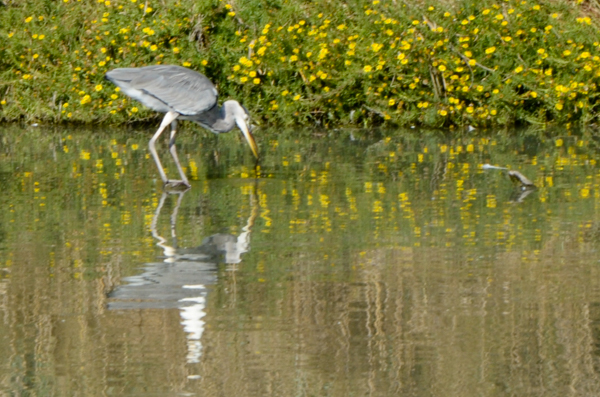 This heron was busily fishing in the shallows. 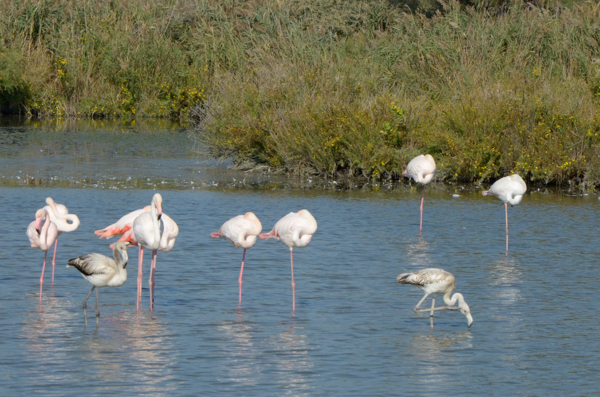 During the time of our visit most of the flamingos were fast asleep.

It looks awkward to stand on one leg with your head tucked firmly under a wing, but it must work for them.

The grey birds are juveniles. 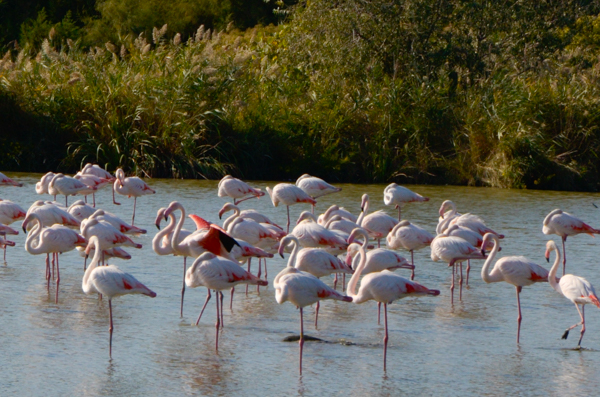 The flamingos do not yet have their brilliant breeding plumage. We found that the undersides of their wings were much more richly colored. I was lucky to capture one stretching.

The large water creature swimming by the flamingos is an introduced carp. They are VERY large and have become a problem because they don't have any local predators. 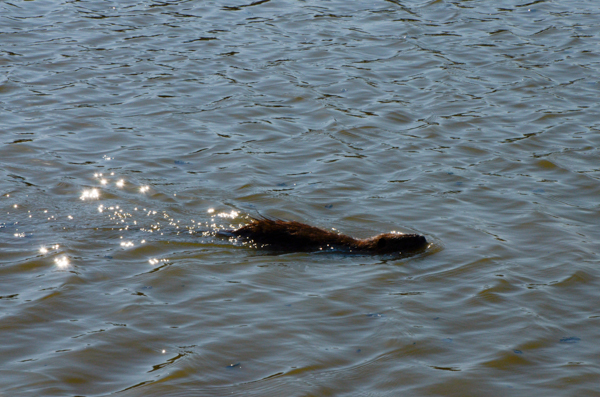 Another unwelcome invasive species is nutria. These were released by failed fur farmers and quickly established themselves in the wetlands. 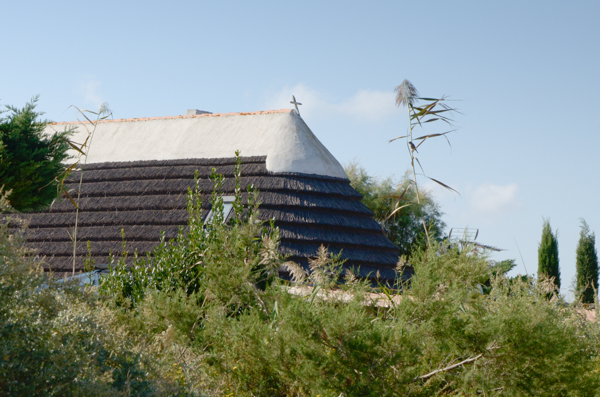 Traditional houses of the area have a distinctive shape. The rounded end faces north to ward off the fierce mistral and lacks windows. Native reeds are used for roof thatch. The mortar on top secures it in place.

The cross at the peak of the roof is a traditional feature. 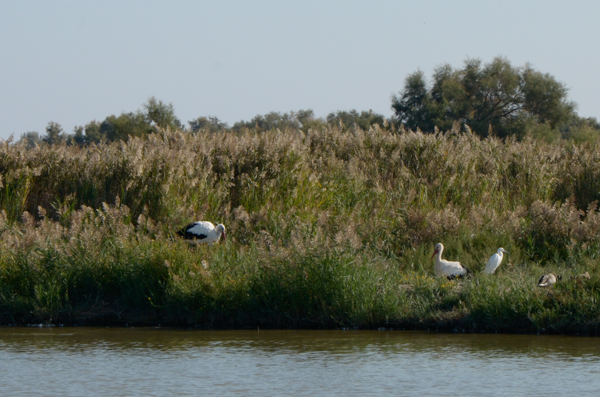 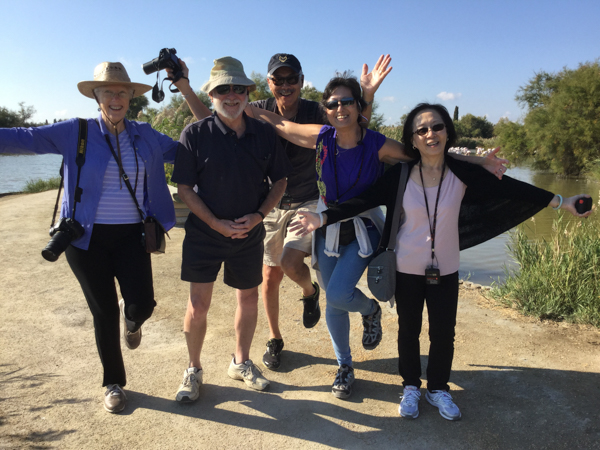 After the naturalist explained the flamingos' mating dance of dancing, wing displays and bowing, May was inspired to try it out. Of course this inspired the rest of us to follow suit. Well, almost. Jim and Marilyn are trying to act reasonably dignified while the rest of us have silly fun. 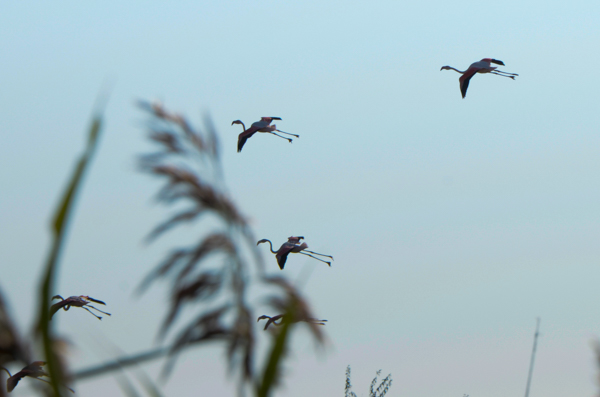 There was much of this park that we didn't have time to explore. There was long drive and a boat to catch -- time was getting tight. As we hurried back to our van, a flight of flamingos came in for a landing. It was too dark to get much color, but they are impressive birds in the air, albeit somewhat ungainly looking.

When we reached the harbor, we were met by staff of the MS Van Gogh to help with our luggage. We bid a temporary farewell to Mouhi because we didn't expect to need the van for a couple of days. After boarding we hurried to the welcome cocktail party where we discovered there were only two other Americans traveling -- a honeymooning couple from New York City! Most of the passengers were Italian and French although there was also a sizeable Swiss contingent.

That evening we were underway for our travels on the Rhône.