After lunch a local guide led us on a walking tour of Arles. Even though we had seen much of the town on our own at the start of the trip, we learned much more about what we had seen. 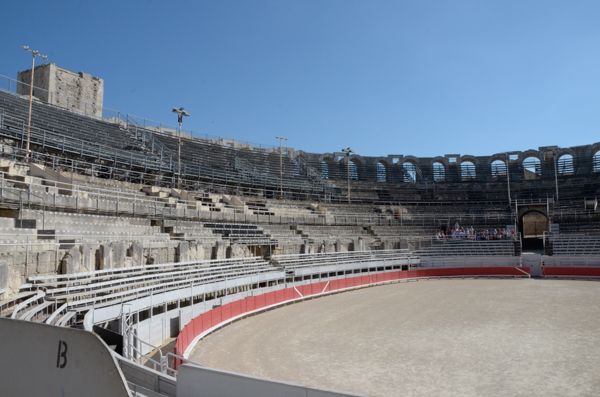 The Roman amphitheater survived the centuries by being turned into a walled "city" and filled with homes, churches and businesses. It has been restored as a sports arena. There is an image at the link that shows how it looked as a city/fortress. The buildings were removed starting in the early 19th century.

Although there are occasional Spanish-style bullfights held here, the Provençal style bullfights using the smaller, more agile Camargue bulls don't result in the death of the bull. Famous bulls attract their own fans and may compete for several years before being retired. A YouTube video illustrates the spectacle at another venue. (It sounds like it is narrated by a robot.) 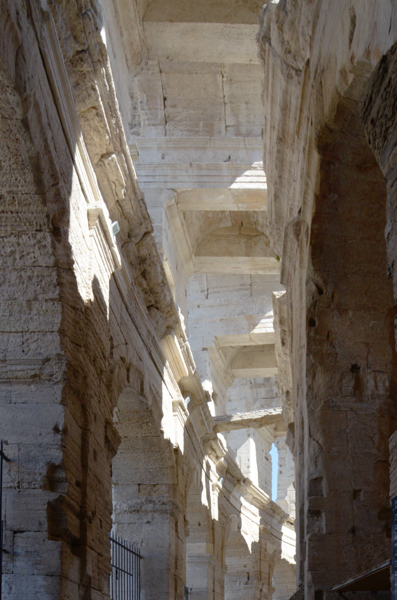 The sun shining through the amphitheatre makes interesting patterns on the structure. 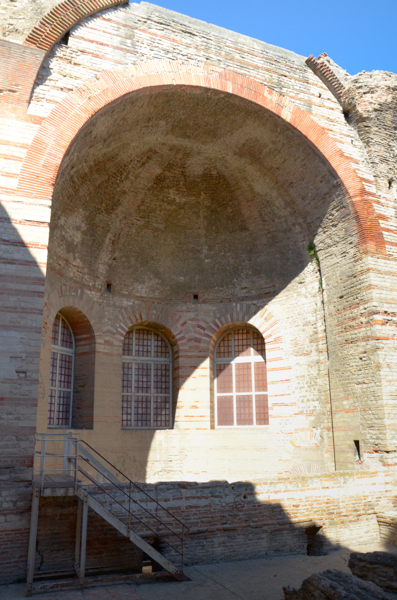 We had seen the Baths of Constantine on the outside during our own explorations, but we were now able to go inside. The original building was much larger than the remaining ruins and extended almost to the site of the Roman forum. Most of the space has been taken up by new buildings over the millennia.

Roman baths had a pretty standard format. The discussion at a PBS Nova site lines up with what we were told about the warm, hot and cold baths. This dome shaped room contained the hot bath here in Arles. The structure is very tall still, but was still taller in its heyday.

The Romans used alternating sections of stone and brick to allow for expansion and contraction of the materials. 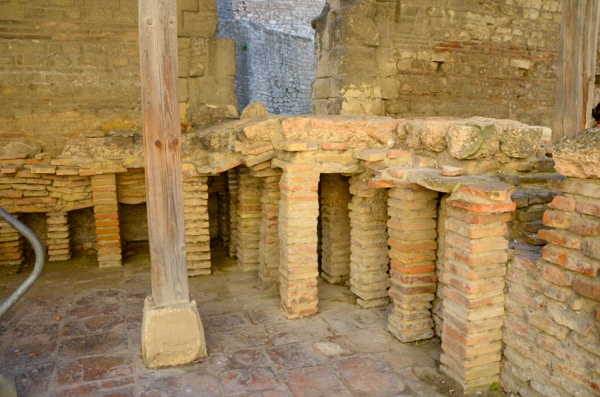 To heat the water for the hot & warm baths, slaves built and maintained fires underneath the floors. Raised floors allowed the hot air to circulate. 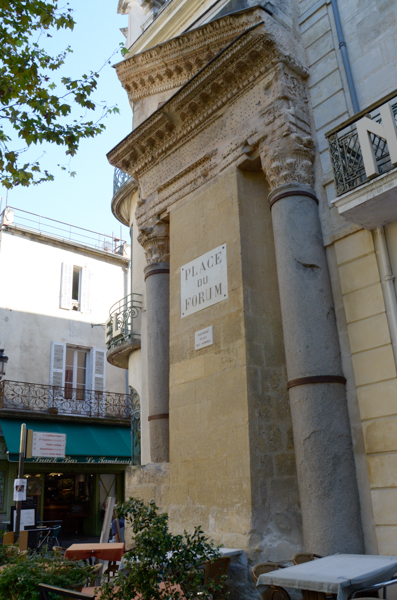 The Roman forum in Arles was on two levels. The only vestige remaining today is this partial portico, incorporated into a modern building, that may (or may not) have been part of the original forum.  A café alongside the square in front of the columns purports to be one that was frequented and painted by Van Gogh. It is a reproduction for the tourist trade. The original café, located in a different sector of the city, was destroyed along with most other Van Gogh sites during World War II. 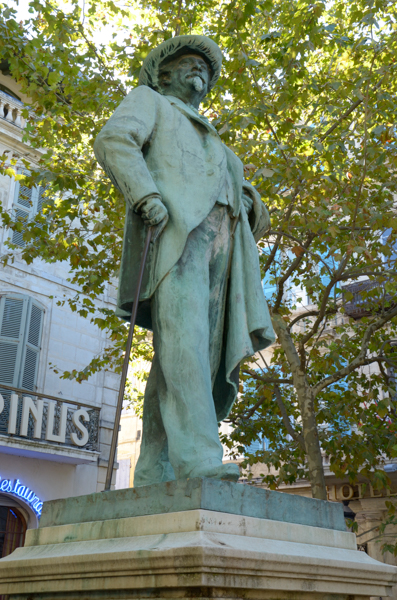 A prominent feature of the Place du Forum is this statue of Frédéric Mistral, the famed Provençal poet of the late 19th century. There were numerous sites in Arles that were either named after him or had inscriptions of selections from his poems. He received the 1904 Nobel Prize for Literature. 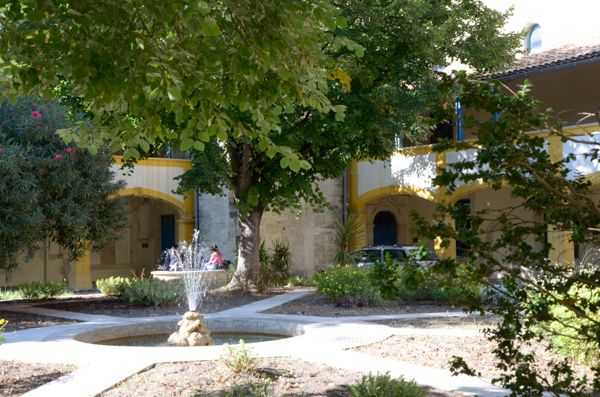 There isn't much left in Arles that can be definitely associated with Van Gogh, but this is one such place: the Espace Van Gogh, which used to be the Arles hospital. When Van Gogh had a breakdown after a quarrel with Paul Gauguin, who was staying with him in Arles, he came to this hospital. He painted a picture of this courtyard during his stay.

When the hospital closed, the courtyard was restored to match the image in the painting as much as possible. We were too late in the season for summer flowers and too early for the planting of fall flowers.

We had some free time here. I had seen a display of crèche figurines or santons at the museum in Tarascon, and Agathe had told me I could find some near here. She took me to a little shop that sold a variety of terracotta figurines and I bought a set with Mary, Joseph and baby Jesus. A full set consists of many pieces and that was beyond my budget. I had hoped to find the fabric variety like I had seen in Tarascon, but it was not to be. Looking online after we returned, they would have been outside my budget anyway. 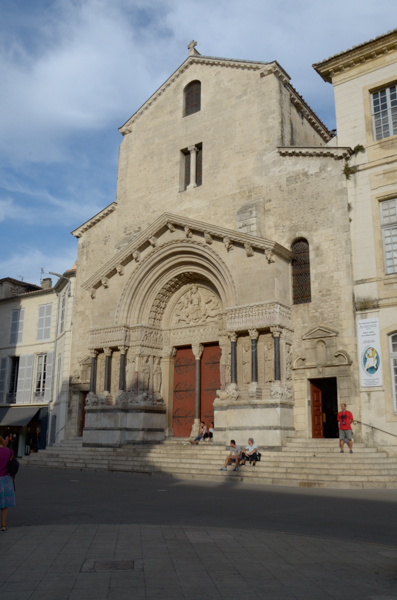 May and Marilyn had their sights set on lavender products to take home as gifts. Agathe knew of a really good shop near the hospital. This was our first experience of exceptionnellement, as in "only this once." There was a sign in the window: closed today only! It was not our last such experience.

Our next stop was the 12th century church dedicated to St. Trophime, a 3rd century bishop of Arles. The Romanesque portico is well-preserved and restored.

It was the start of the Via Tolosa, the Pilgrim's Way that started in Arles and eventually led to Santiago de Compostela as described earlier in our trip.

Check out this web site for volumes of pictures of this church. It has pictures of the nave, which was much too dark for my camera. The technology of the Romanesque churches didn't permit the large windows that became possible with the later introduction of flying buttresses.

The bell tower soars over the enclosed courtyard. 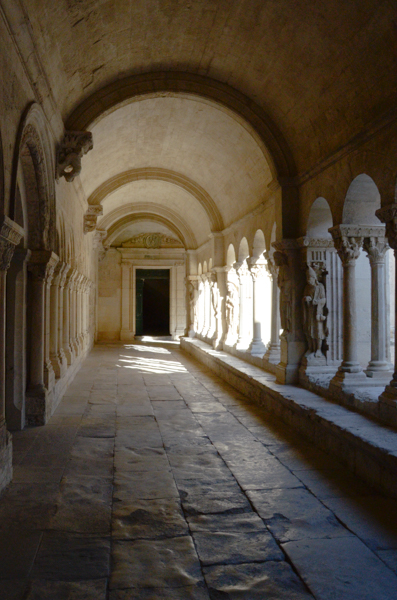 The galleries around the cloister were not all built at the same time. The earlier Romanesque style, found on two sides, illustrates rounded arches and is heavier in appearance.

Gothic galleries had pointed arches with a much lighter appearance.

The carvings on the capitals, however, were much coarser than the earlier ones -- almost as if they were afterthoughts. 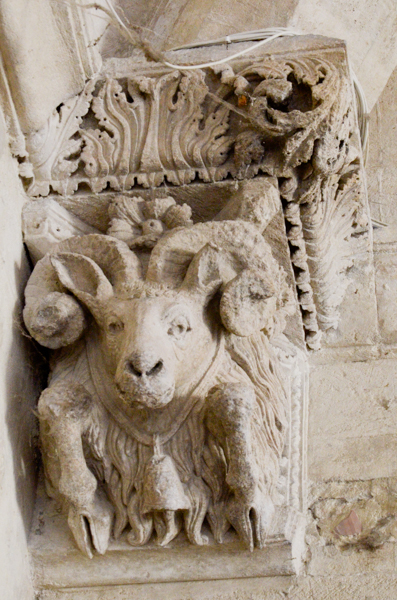 The carvings throughout the Romanesque galleries were detailed and depicted scenes from everyday life as well as religious themes.

The building had been recently cleaned so that the carvings showed their high relief. Agathe told us that there are regulations in France about the cleaning of buildings. When anyone buys a flat, for instance, it is wise to investigate when the next cleaning is due because that may have a significant impact on the maintenance assessment. 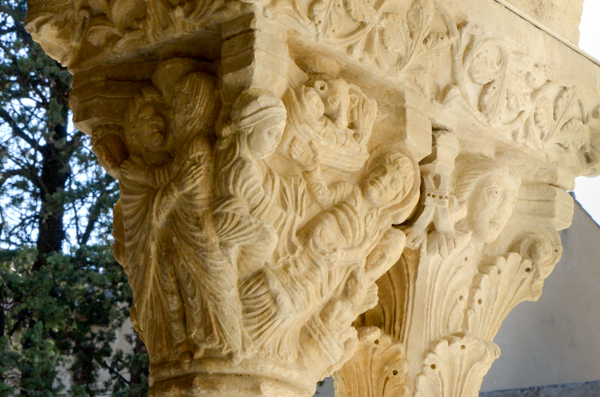 One capital that particularly struck me had the meeting of Mary and Elizabeth on one face. Another face illustrated a nativity scene with Mary attended by a midwife and baby Jesus cradled with a cow. 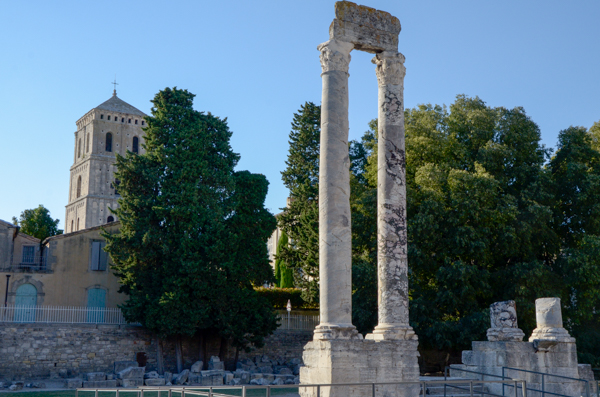 Our final visit was to the Roman theatre. As noted earlier most of the stones were "repurposed" for other building projects during the middle ages. These two columns have been reconstructed. The tower in the background belongs to St. Trophime.

This space is again used for theatrical productions. The season started shortly after our visit. It is too hot for open-air productions in the summer.

This evening we returned to the valley near Les Baux to have a gala dinner at La Cabro d'Or and celebrate our last day in Arles.