After lunch in Châteauneuf-du-Pape, we visited an aqueduct built by the Romans and  then toured the Souleiado fabric museum in Tarascon. 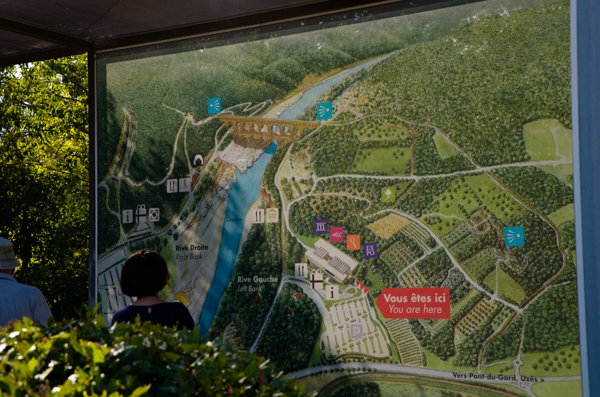 The Romans built the Pont du Gard aqueduct to supply the settlement of Nîmes in the 1st century AD.

This map is an overview of the bridge and the aqueduct contained in the park. The engineering is impressive. The main bridge is believed to be the largest built by the Romans: over 900 feet long (three football fields) and 160 feet high (about 16 stories). It is only part of a system that stretched over 30 miles.

You can find out more than you thought you wanted to know about Roman aqueducts in general and the Pont du Gard in particular at the link (opens in new window). Click on "100 selected aqueducts" and scroll to the Nimes entries. There is also information on the Gier aqueduct that we visited at Lyon.

A less technical discussion may be found at Wikipedia. 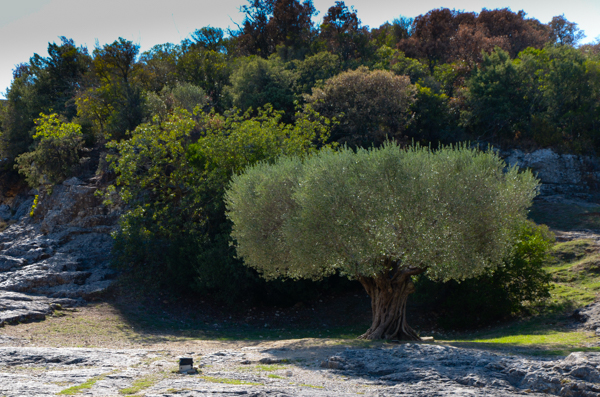 We did not have time to visit the extensive gardens. This ancient olive tree was on the way to the bridge. A nearby inscription said that it had been planted in 908AD, which makes it over 1100 years old! It and a companion tree of the same age were transplanted here from Spain in 1985. 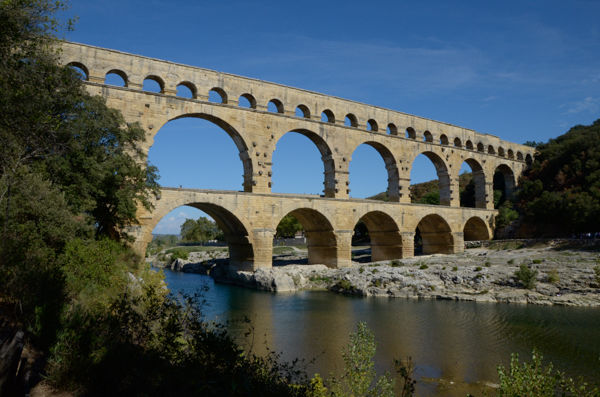 To celebrate my birthday I scampered from the level of the river to the highest tier in search of the best pictures. Of course my favorite, this picture, was taken from the recommended point that was easiest to reach.

Maybe "scamper" is not exactly the right word.

The view from the top was not worth the climb! 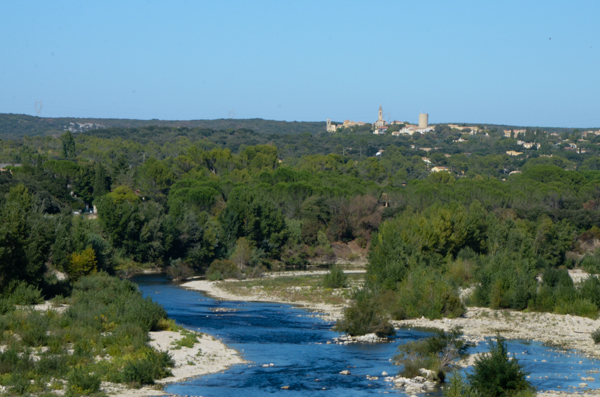 The view downstream from the newer (18th century) bridge built alongside the Roman bridge. 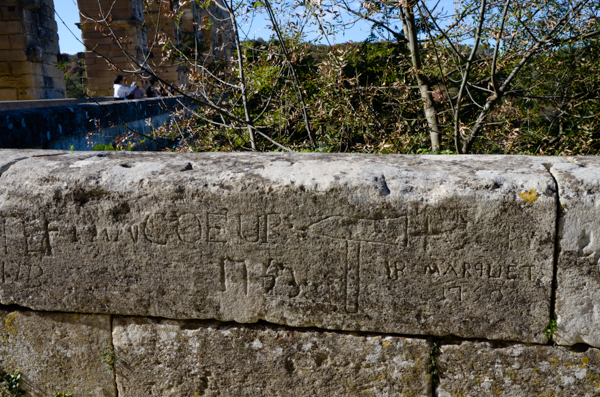 More-or-less ancient graffiti carved is into the bridge sections. Some of the inscriptions were from workers who helped with restoration and repair over the centuries. We saw similar inscriptions in the stonework at the Palace of the Pope in Avignon. Our guide said that workers were paid by the amount of stone they placed and they literally "signed" their work to document what they were owed.

This particular inscription dates from the construction of the adjacent road bridge in the 18th century. 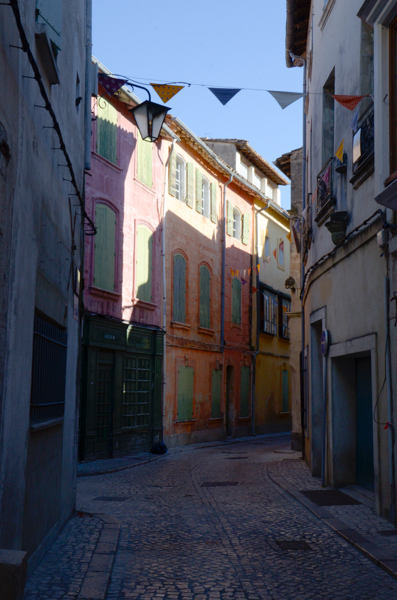 After leaving the bridge, we drove to Tarascon, a city on the Rhône between Arles and Avignon. The city was named for the Tarasque, a mythical monster that terrorized the region before being tamed by St. Martha, the patron saint of the city. Unfortunately for the monster, once tamed it was slaughtered by the local folk. They then repented of their cruelty and renamed their city in its honor.

We didn't see much of Tarascon -- only so much as was on our walk to the museum. This particular street was very colorful. Most of the buildings were tightly shuttered. We asked our guide if they were in fact inhabited and she said that many people close up their houses during the day to keep out the heat. 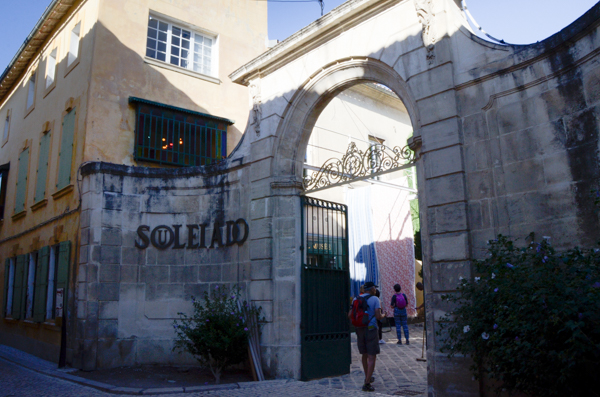 The museum and Souleiado shop are located off the courtyard behind this gate. The museum commemorates the textile printing and design business that operated here. The company was noted for its elaborate designs. 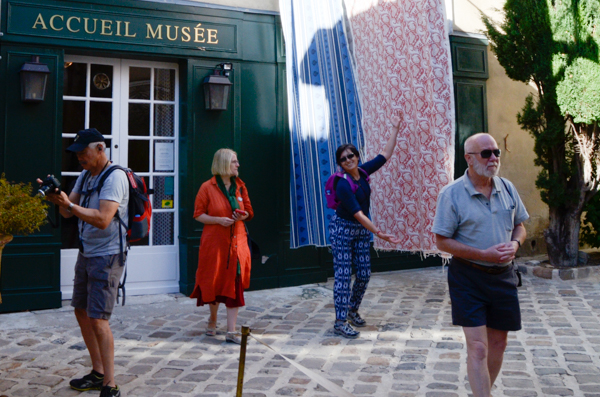 May is hamming it up with samples of the printed fabrics. The company is still in business, but produces the fabrics elsewhere in the city nowadays. 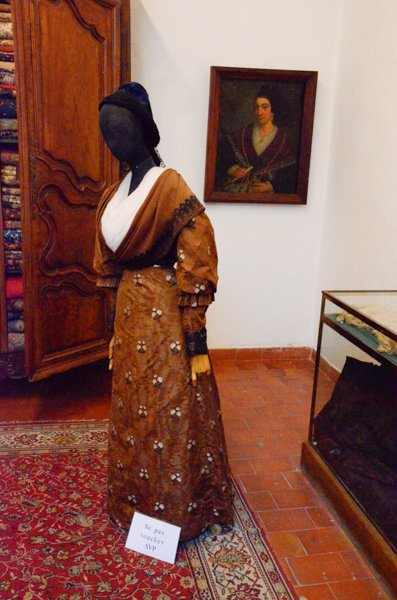 We started our tour with a display of a traditional 19th century Arlésienne costume. These elaborate dresses, which also included an equally elaborate hairstyle and headdress, could take over an hour to put on.

Every three years the Festival Committee elects a Queen of Arles to represent the city and region. (There is a great video at the link above showing some of the celebration including the Camargue version of a bull fight.) The queen is crowned during the Feast of the Herdsmen on 1 May. In addition to good looks, she must be native to Arles, speak Provençal, and be knowledgeable about Provençal history and culture. Plus she must wear the traditional garb at all formal events. 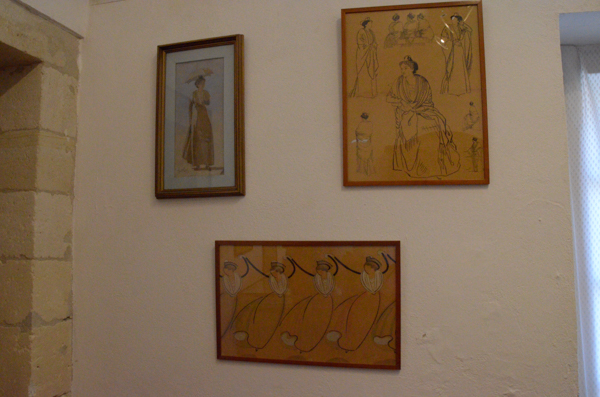 There were numerous design drawings of traditional costumes on display. One included instructions on how to and how NOT to drape the fabric to make a proper train for a lady's gown. 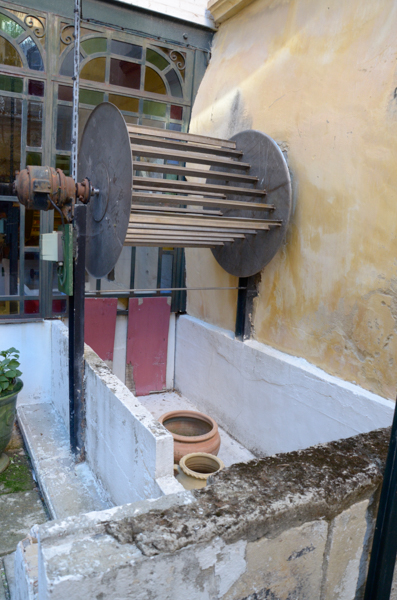 The docent explained the process for printing and dying the fabrics, which included washing the fabric to fix the colors in vats such as this one.

Unfortunately the docent spoke French and our local guide didn't appear to be especially conversant with fabrics so I'm afraid a lot got lost in the translation. 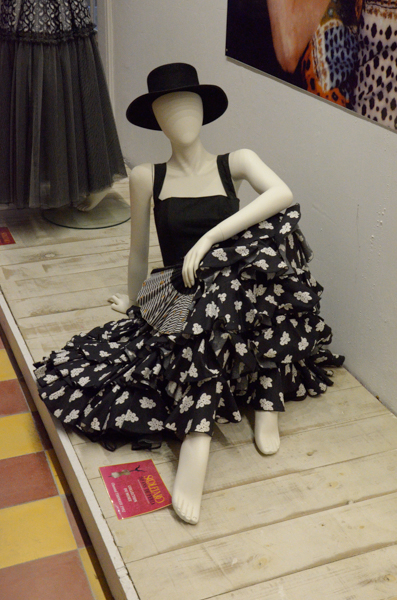 I couldn't take pictures in the production displays and the section devoted to antique textiles, but this was my favorite of the modern designs.