After our wonderful meal, we shoehorned ourselves back into the van for the drive to Les Baux de Provence to work off some of that hearty lunch. The medieval village crowns a high limestone outcropping that is part of the Chaine des Alpilles. Pierre Berthier discovered bauxite, aluminum ore, near here and named it after the village. 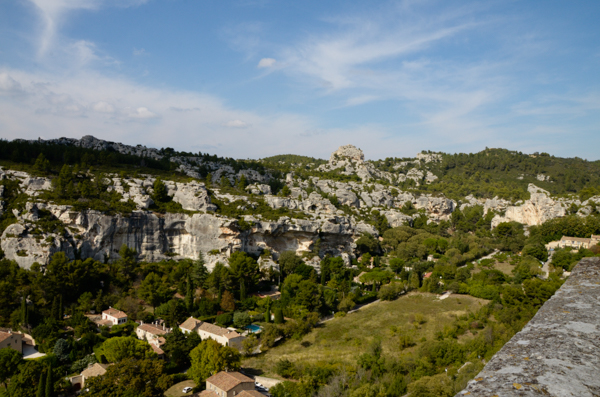 The limestone cliffs are rugged and scenic. In ancient times villages and towns were built on high, defensive locations. The modern village is down in the valley below.

We returned to this area later in the week for a gala dinner. 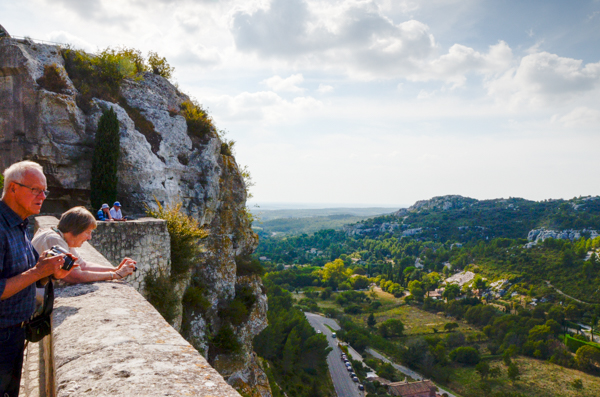 Looking down the valley in the other direction shows how the cliffs rise up out of the valley. Bau means "rocky escarpment" in Provençal and was the source of the village's name. It is apt.

We had free time to explore the area. It was quite crowded in spots, even though it was a Monday, so I was happy to find places that were relatively free of people. 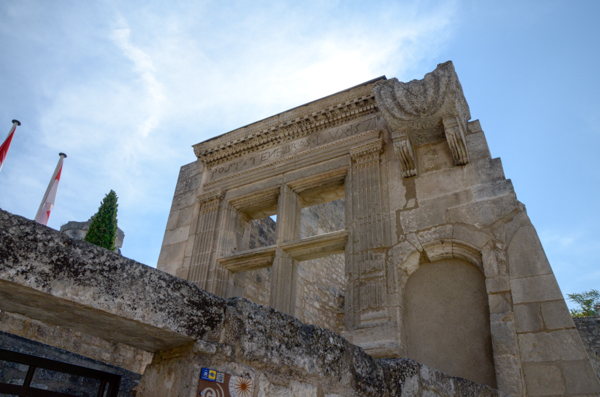 The village dates from Roman times and has had a turbulent history. The medieval princes of Les Baux claimed to be descendants of the legendary Balthazar, one of the three kings in the Christmas story. They built a large fortress château at the crest of the outcropping, but were deposed in the 12th century.

By the 15th century the area was incorporated into France, but the château was destroyed lest it become a focus for rebellion. In the 16th century the town became a Huguenot stronghold. This ruined chapel dates from those times. The motto carved above the window is: "Post Tenebras Lux," or "after the darkness, light" and is a rallying cry for reformation.

I have ancestral ties to the Huguenots, although not of this region, so this was significant to me.

In the 17th century the town was granted to the family that are the princes of Monaco. They still retain the title Marquis de Baux. The plaza in front of the chapel contains flags associated with that family. 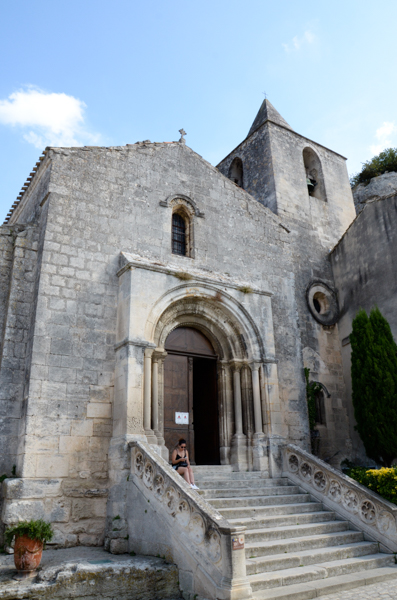 St. Vincent's Church is a Romanesque structure from the 12th century. 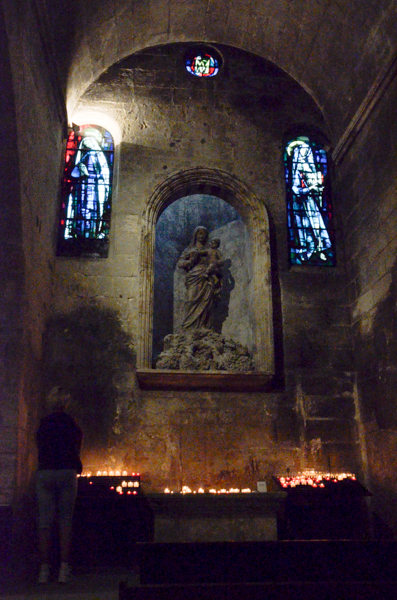 The small chapel within the church contained a shrine to the Madonna. The stained glass windows are a recent gift from the Grimaldi family of Monaco. There were many worshipers paying homage here.

Romanesque churches don't have the soaring light-filled spaces of the later Gothic constructions. 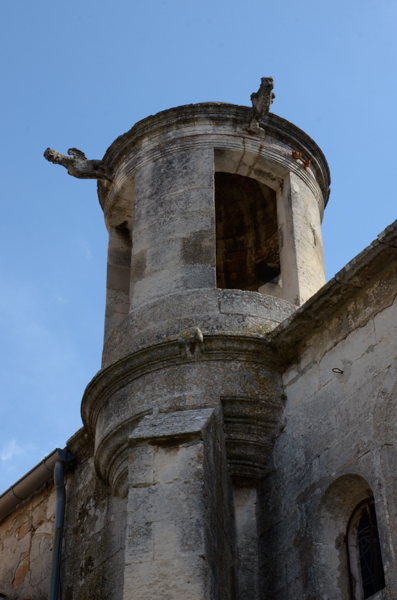 The lantern with its gargoyles on the side of the church. 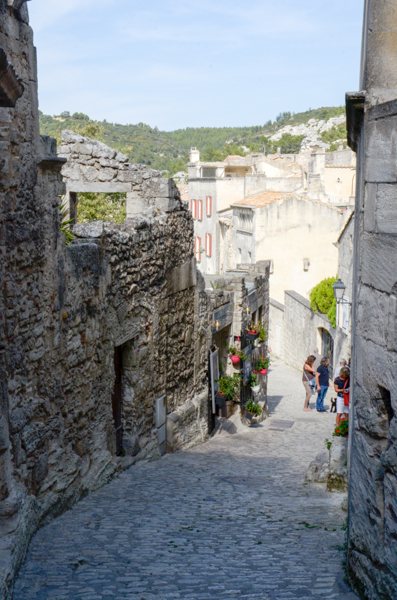 The village is completely pedestrian. It is popular and crowded, but this street was relatively quiet.

The steepness of the streets enabled us to work off some of the calories we had accumulated at the olive mill. 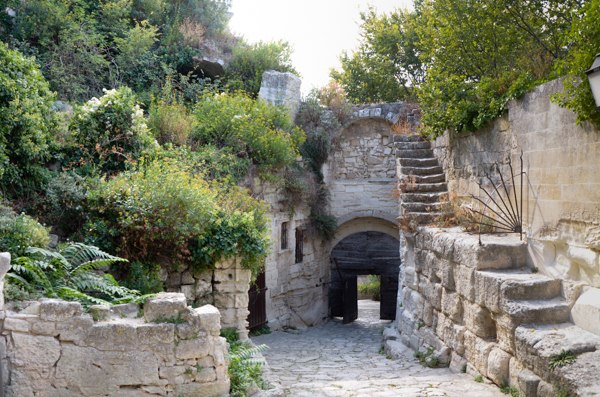 One of the gates to the village.

The stairs, which are blocked off, reaching over the gate looked like they may have led to an interesting walk. I'm sure it was dangerous, though. 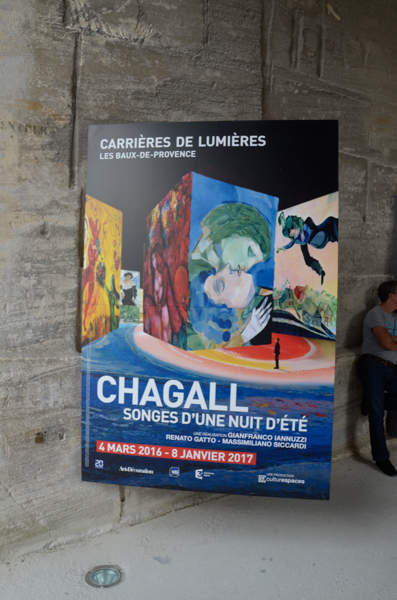 After our free time of exploration, we visited a light show, the Carrières de Lumières, in a nearby quarry. It is impossible to describe this show. The description that was in the trip materials wasn't particularly gripping, but the experience was amazing. The featured artist for 2016 was Marc Chagall.

There was an Alice in Wonderland "short" playing when we first entered. Surreal moving images played across the walls, ceiling, and floor of the irregular darkened space. Afterwards Jim & I agreed that if we had been able to find an exit, we might have bolted. That would have been a shame, because once you got used to the movement and changing images it was spectacular. The Chagall portion was much less disorienting. Or maybe our eyes and brains had just gotten used to the surroundings.