Eating & Sipping in France
Arles On Our Own 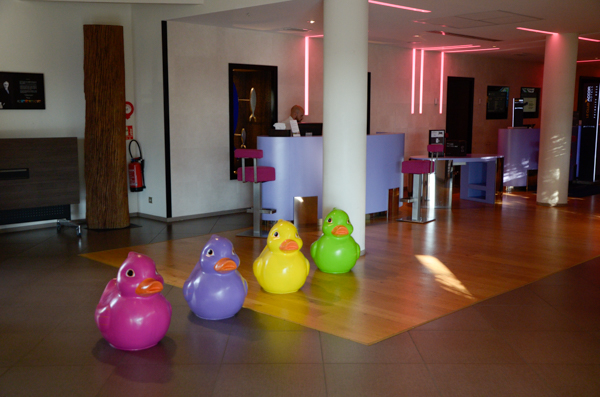 In order to meet up with our scheduled transfer to Arles, where the program would begin, we had to fly to Marseilles a day early. Road Scholar arranged a night in the Pullman Hotel. It was a whimsically stylish place and very comfortable.

In the morning we packed our bags and followed the excellent walking paths to the terminal to meet our group. Imagine - an airport set up for walkers!

As it happened, however, our guide had asked the hotel to tell us to wait there, but the message was never delivered. It was our first experience with the French proverb: C'est la sardine qui a bouché le port de Marseille (a sardine has choked the Marseille harbor). Roadway construction had limited access to the airport for our van so the plan was to transport our fellow travelers back to the hotel where our official van was waiting.

Before we get started I have to introduce Mouhi, our more-than-capable bus driver, and Agathe, our knowledgeable, creative and engaging guide.

Since we were such a small group, Mouhi had secured a a comfortable VW mini-van rather than a bus. This meant that he could drive through the tiniest streets, which saved us some arduous climbs. Mouhi had been born in Morocco and moved to France with his family as a toddler.

Agathe had originally studied as a diplomat and shocked her family when she announced that she wanted to be a tour guide instead. We pointed out that she still got to exercise all of her diplomatic training as a guide.

They were a fabulous team! 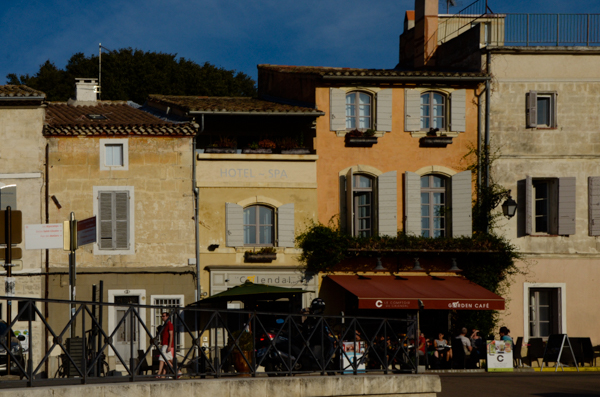 Our hotel in Arles, Le Calendal, comprised several buildings that were linked together through a central garden. Our room was in the structure with the red awning, the two top windows. It was quite comfortable and convenient.

After arriving in Arles we walked around town in an attempt to stay awake. Lunch consisted of a late afternoon ice cream.

The charming old city of Arles is a World Heritage site in its entirety and contains remnants of Roman and Medieval periods as well as modern buildings outside the historic center. We pretty much walked all over town in one afternoon. 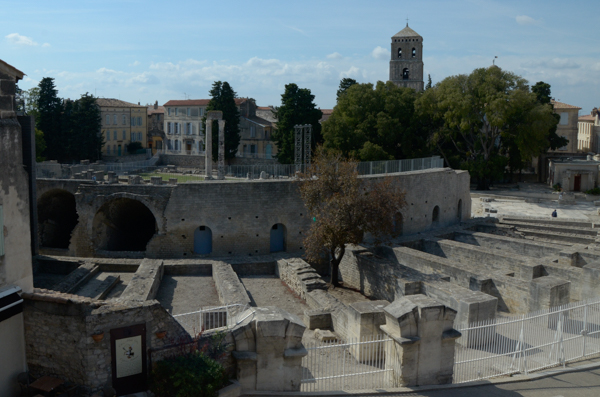 Our hotel overlooked the remains of the Roman theatre. Although it was largely destroyed in the Middle Ages with most of the stones cannibalized to build other structures, it has been extensively restored and is now used for cultural events.

The tower in the background belongs to the cathedral. 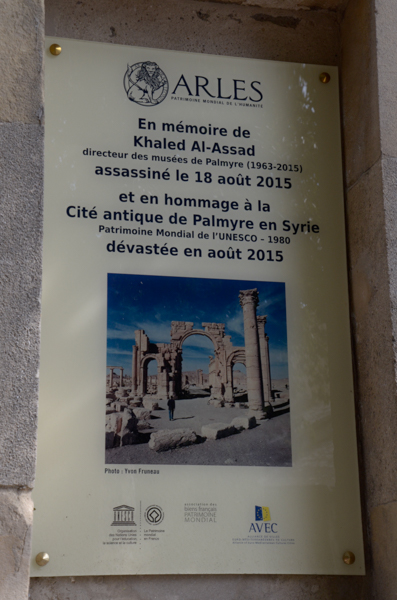 We were touched by this small monument to the loss of another "antique city" and the director of the museum there. Jim had very much wanted to see Syria, especially Aleppo, but the civil war has destroyed much that had survived the millennia -- not to mention the untold thousands of people. 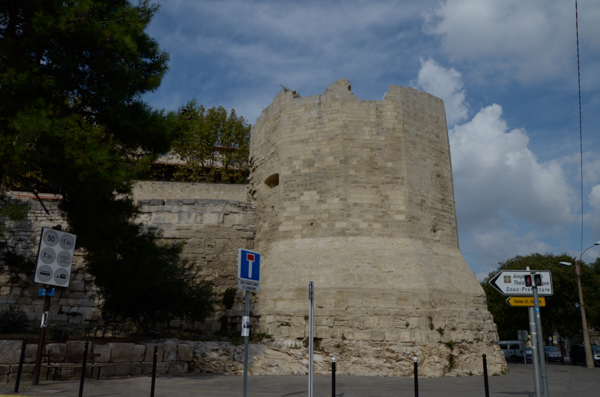 We were led to this "Roman tower" by signs. As it happens, the actual Roman tower is no longer visible. It was incorporated into the current La Tour de Mourgues in the late middle ages.

Arles was one of the stops on the Pilgrims' Way to Santiago de Compostela. There were several routes that were used by pilgrims to the Spanish shrine believed to contain relics of the Apostle James. We were to see markers of another route later in Vienne. 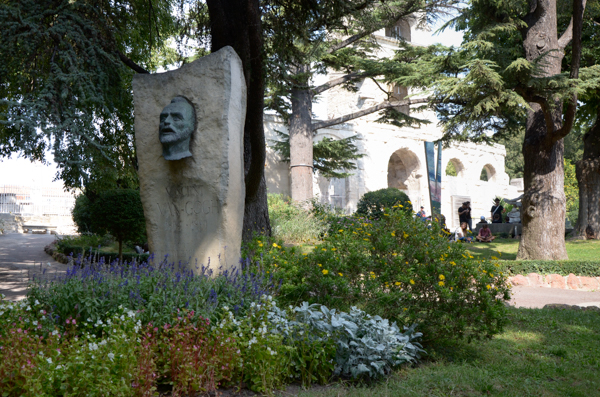 The lovely park, Le jardin d'été, lies in front of one of the monumental entrances to the Roman theatre. It contains a monument to Vincent Van Gogh. The head has an eerie effect displayed like this. It looks more like a death mask than anything else. The artist is William Earl Singer.

The bust illustrates the earlobe that Van Gogh cut off and that precipitated him into the hospital. 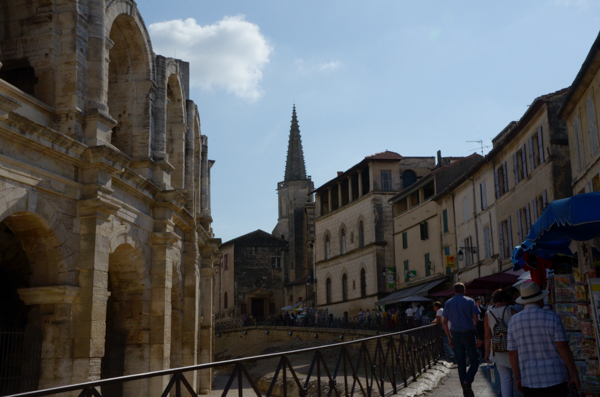 The Roman Amphitheatre, on the left, was not far from our hotel. The steeple in the center belongs to a school that was in front of the hotel: the College (middle school) St. Charles. If we slept through our alarm in the morning we were sure to be awakened by the children gathering in front of the school waiting to go in!

Agathe told us that French schools have a small window of time for the students to be admitted. The youngsters either take a bus or are dropped off by their parents to wait until the doors open at which time they stream in before the doors are shut again. 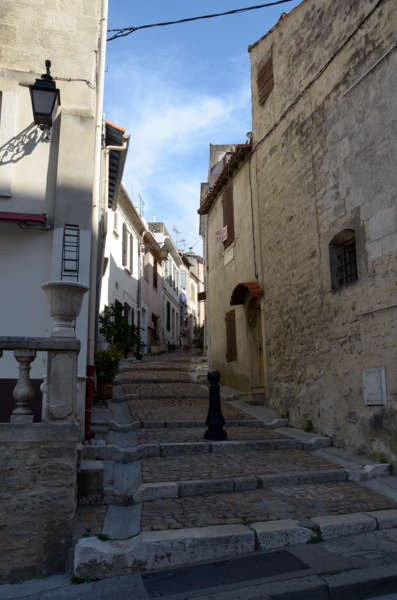 Arles is a great walkers' town -- unless you don't like hills. Like most of the old towns and villages that we were to visit, it sits on a high location for protection during uncertain times.

We saw numerous houses with drying racks suspended outside a window. 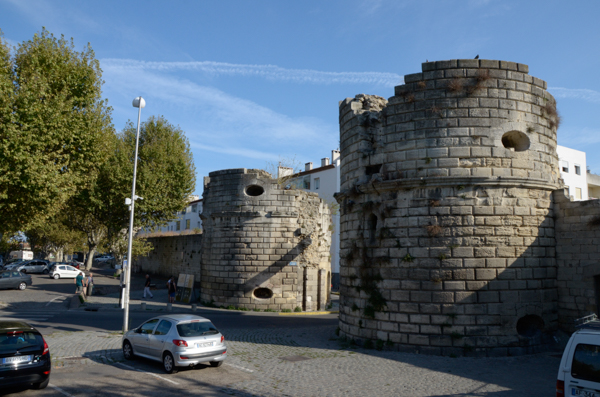 The Porte de la Cavalerie was part of the medieval fortified wall around the city. The city ramparts were extended to this area in the 12th century. The name comes from the location of the convent of the Knights Templar, which was nearby.

The towers were rebuilt in the 16th century, but were partially destroyed during the French Revolution. The revolutionaries targeted many sites on our tour -- especially churches, chapels and châteaux. 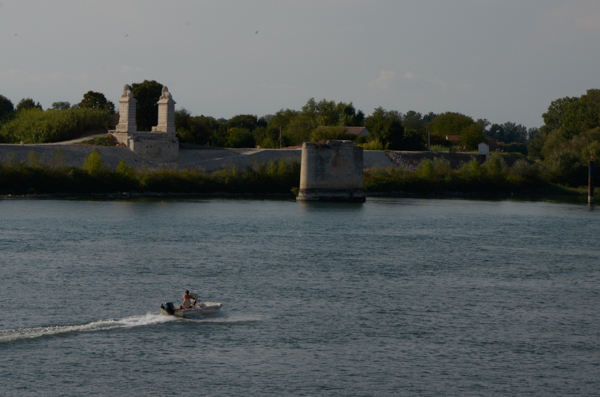 The Rhône flows not far from the Cavalry gate. The Lion Bridge, built in the mid-19th century, once carried a railroad across the river. Allied bombing during WWII destroyed the bridge and much of the area north of Arles, including most Van Gogh sites.

The Rhône makes a wide curve around the town of Arles. South of Arles it divides into two rivers, the Great Rhône and the Little Rhône. The area between them is the marshy area called the Camargue, which we will be visiting later.

Humans have "controlled" the river with dikes and dams thereby impacting the fertility of the Camargue region. When we flew into the Marseilles airport we could see how the various tributaries twined together. 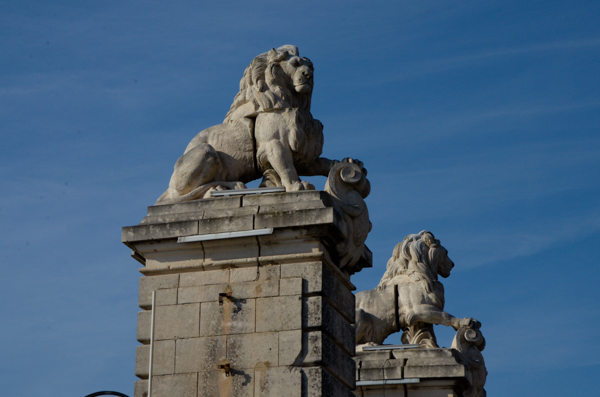 The lion sculptures at the entrances to the bridge were designed by Pierre Louis Rouillard and stabilized in 2008. 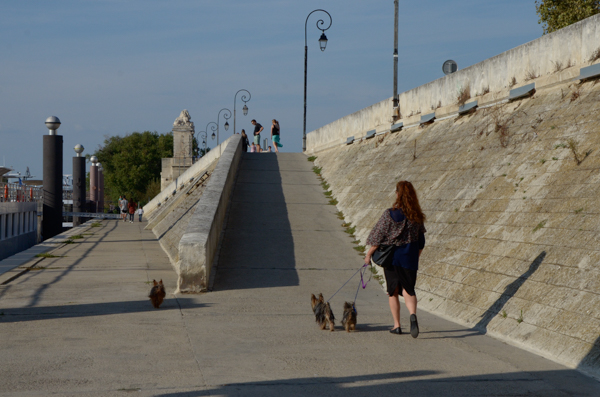 A couple of large river cruise ships were docked next to the quay. There were also numerous smaller vessels moored on the opposite side of the river. 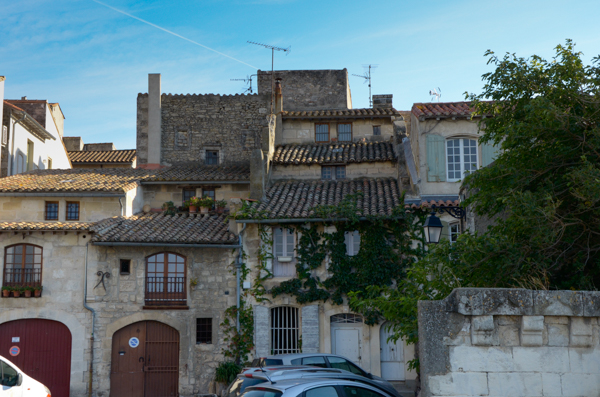 Picturesque houses faced onto the river. 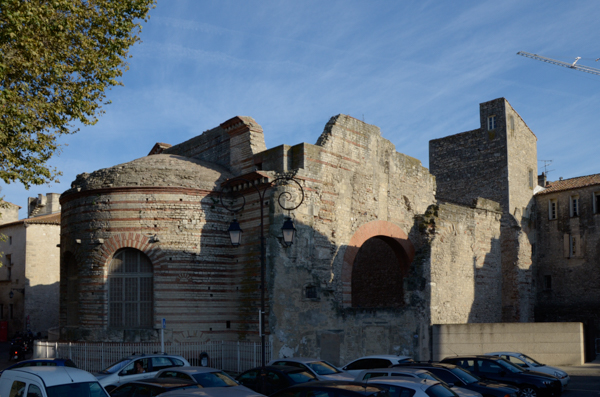 The remnants of the ancient Baths of Constantine are also located by the river. They were built during the 4th century AD reign of Emperor Constantine I, who used to visit the city. His son, Constantine II, was born there. We would visit the baths later. 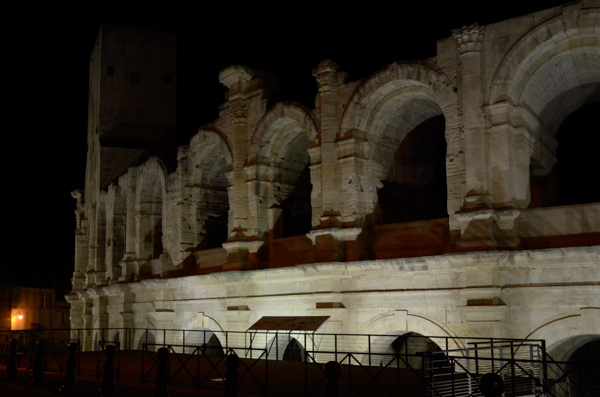 The Roman ampitheatre was next door to our hotel. It was quite striking lighted up at night. We were to visit it later in the week.

We managed to keep awake until a reasonable hour. We did not discover the air conditioner in the room that first night so we opened the windows overnight to cool off. Voracious mosquitoes! I was glad that we could keep the windows closed for the later nights.