On our last road trip to Florida we stopped outside Savannah for the night. It rained the entire time. We decided that on our next pass, if it wasn't raining, we would stay downtown to see more of this quaint city. It wasn't raining so we stayed two nights!

We also took the opportunity to stop in Durham, NC, to visit our Pease cousins who live there. 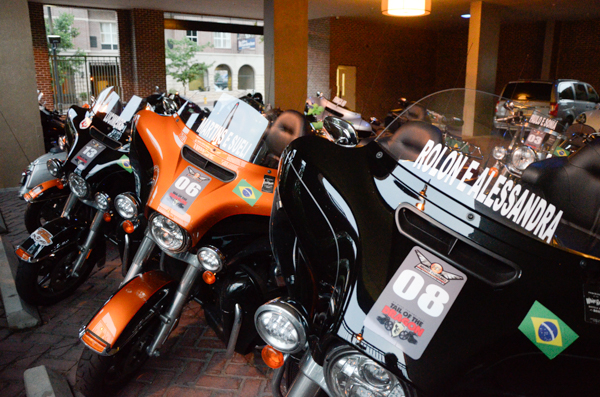 A large motorcycle tour group was staying at the hotel. A Brazilian motorcycle club had shipped their bikes (Harleys, of course) to the US for their tour.

They seemed to be nice folks and they were certainly enjoying themselves! 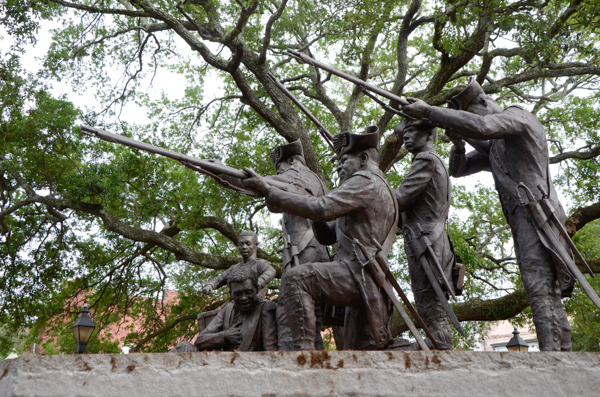 This monument honors Haitian volunteers who fought in the American Revolution against the British. The memorial was completed and dedicated in 2007. 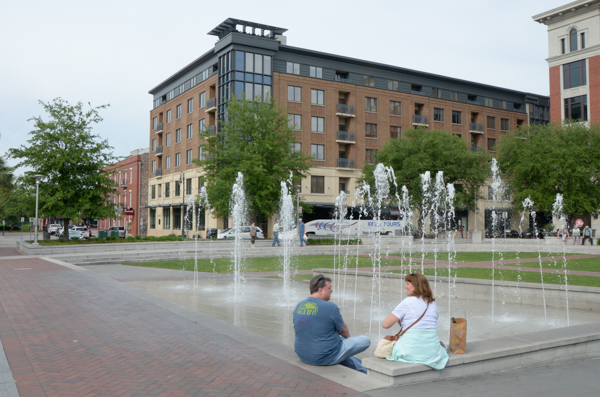 Savannah's town plan was ground-breaking at the time the city was founded in the early 18th century. The credit for the plan goes to James Oglethorpe.

Key features are the organization of the city into "wards" constructed around squares. Like everywhere else there have been changes in the past 250 years, but even redeveloped sections of the city, such as this one, have retained the concept of open public squares. This didn't happen easily. Residents came together and stood up to the commercial interests that wanted to bulldoze and pave over everything. 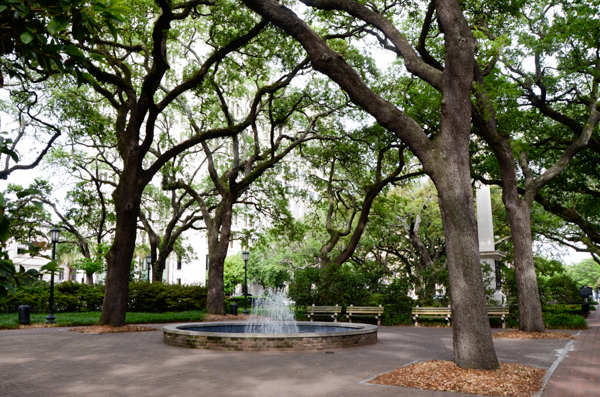 A more traditional square also in the heart of the city.

There are numerous discussions on the WWW about the Savannah plan and its effects. Search for "savannah georgia urban planning" and prepare to spend some time browsing. 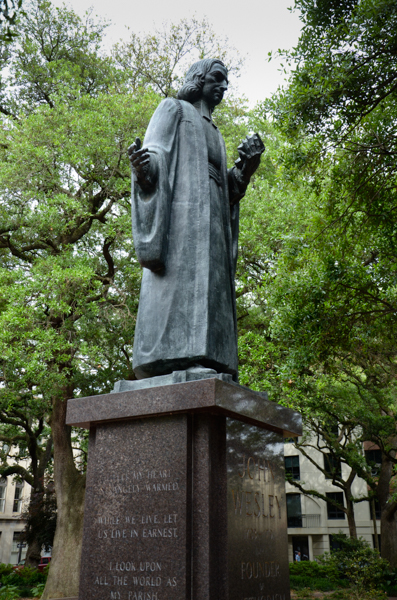 James Oglethorpe invited John Wesley to serve in Georgia. He brought his brother Charles with him.

Neither brother was happy in the new colony. Charles returned to England within a year and his brother followed him not long after. His experiences with the Moravians in Georgia led John Wesley to the evangelical mission that became Methodism. Charles Wesley went on to become a prolific creator of hymn texts including such favorites as "Jesus Christ is Risen Today" and "Hark the Herald Angels Sing." 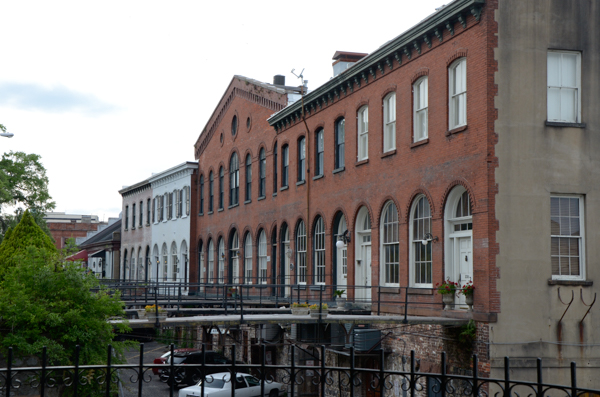 Savannah is on a high bluff above the Savannah River. These old warehouse and commercial buildings show the 2nd story entries facing the city.

On the back side facing the river they have more stories. This is now a location for tourist shops and restaurants. 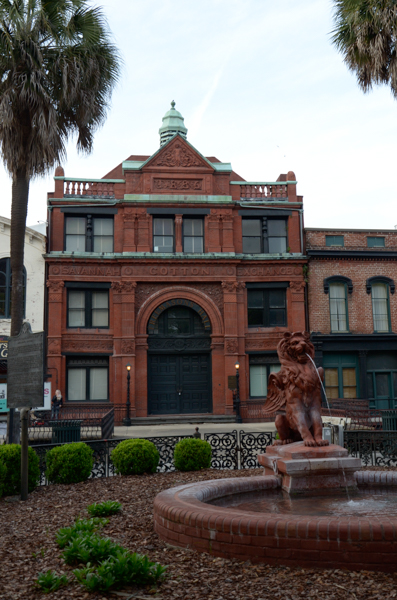 The Savannah Cotton Exchange dates from the late 19th century when Savannah was a major cotton seaport. 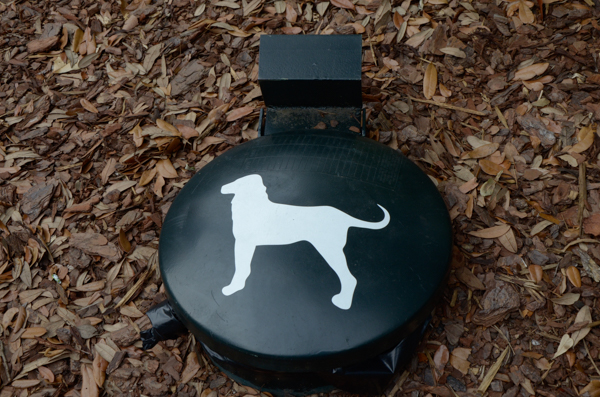 This takes the notion of "curb your dog" to a new level! Numerous dispensers of poop bags and these handy disposal units make it easy to keep the streets and parks clean.

Hoppy has reached the stage of life where he no longer enjoys travel, so we had no need for these conveniences. 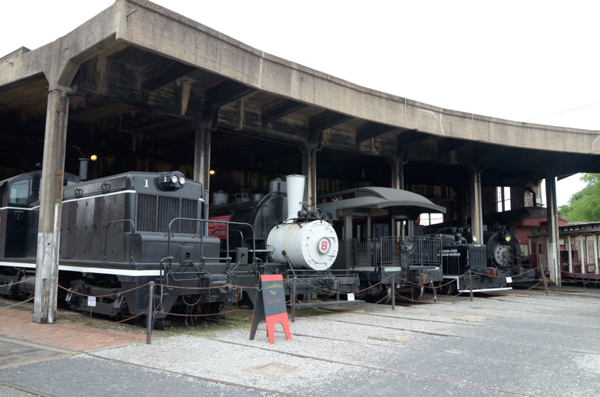 We spent a delightful couple of hours at the Georgia State Railroad Museum. They had a display of rolling stock, including one Norfolk & Western car, plus the ability to visit the old railroad shops of the Central of Georgia. 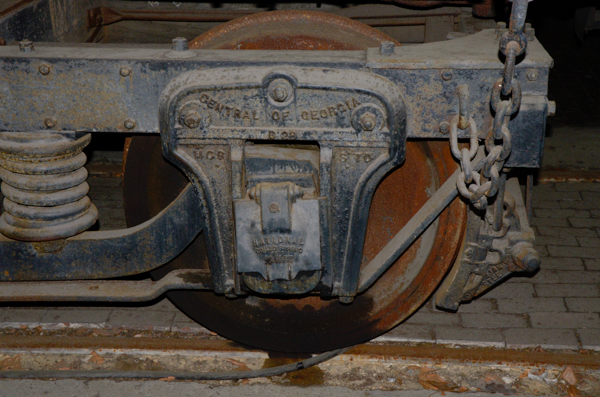 An example of the products of these shops. The shops closed in 1963 when the railroad was acquired by the Southern Railway. 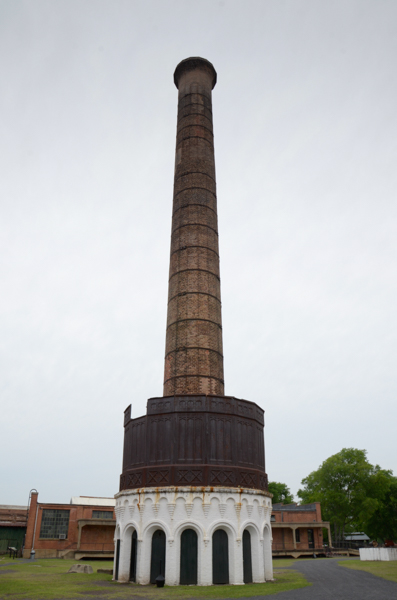 Underground flues connect this smokestack to the forges at the shops. Prevailing winds help the stack draw. A reservoir behind the iron panels once contained water heated by the flue. The doors in the bottom led to twelve heated privies, showers, and changing rooms. For white workers only!

When the shops closed, an attempt to dismantle the smokestack met citizen action so it remains. 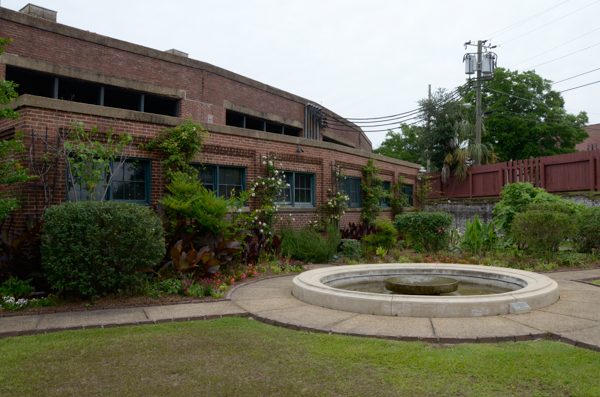 Imagine a garden in the midst of the shops!

The railroad encouraged gardening by the workers as a respite from the industrial surroundings. Various rail yards competed for prize vegetables and flowers. The museum created this garden in 2004 from a 1900 plan.

There is still more to see in Savannah, but we were anxious to return home. 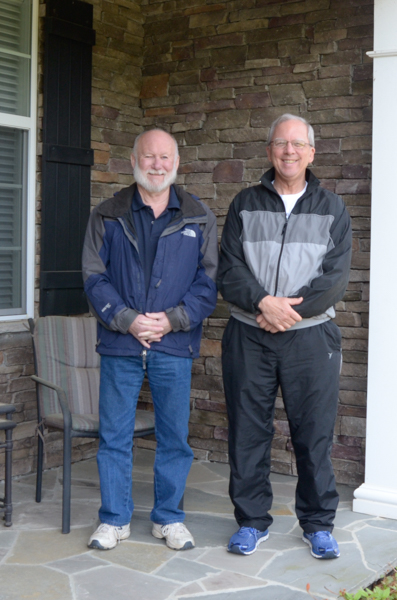 We bunked with my cousin Jim Pease (on the right) in Durham for our last night out. After surviving a rush hour drive past Raleigh, we met Jim at his home and then headed over to see his sister Betty & her husband Hop at their new home.

That evening we ate supper at a restaurant overlooking the Durham Bulls (AAA) Athletic Park. The season hadn't started yet, so we didn't get in a second baseball game on this trip, but the food was good and we enjoyed sitting on the outside deck in the mild weather. Can't imagine why I didn't take my camera, but I didn't so no pictures of Betty & Hop. 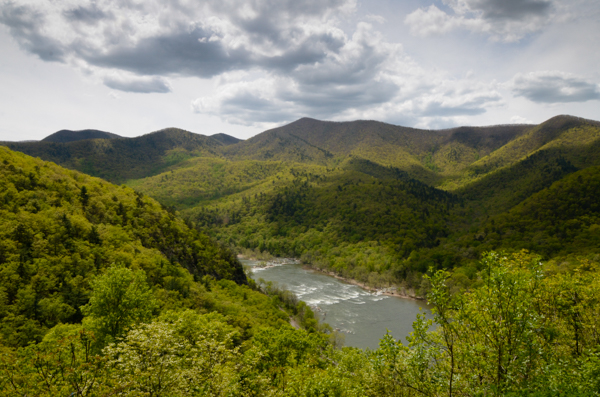 The next day was an easy drive home. To celebrate we stopped and I captured this picture of the James River valley just over the Rockbridge County line. There's no place like Virginia!