I realized that there were a shocking number of people and places that were of special note to me when growing up for which I don't have pictures. A few of them no longer exist and all of the rest have changed. Nevertheless I was able to get pictures of most of those that remain. These are not the many tourist spots of Vicksburg, but places that have particular associations for me. 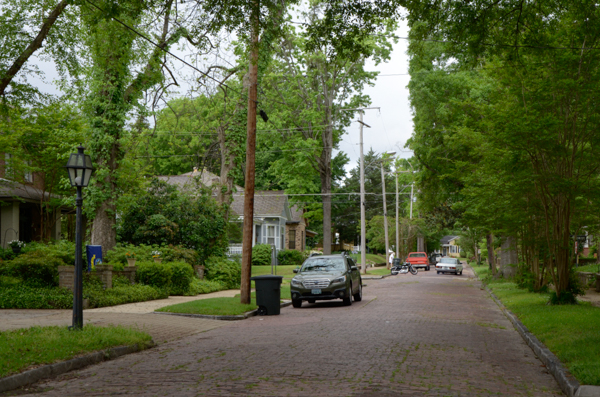 Although my parents lived elsewhere when I was born, we moved to Baum Street when I was one or two and this is the street where I grew up. Most of the houses have been well-kept over the years although the once-lovely house just across the street (not pictured) has fallen into great disarray.

I had not been back on the street for many years. I told Jim that although it is a cliché, the street is much shorter than I remembered!

Many Vicksburg streets were paved with brick and many still are. 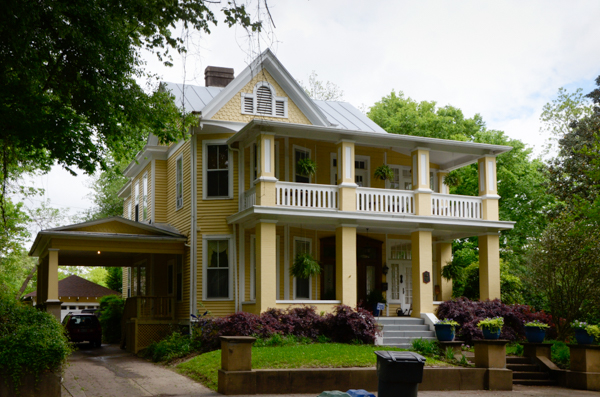 The house where I grew up at #1415 has been well-preserved. At the time that my parents bought the house, it was divided into two apartments. We lived downstairs and the family of Lucien Ferris (Lucien, Lois, Minor and Kim) lived upstairs. They moved out after a year or two. The house was then converted back into a single dwelling although we retained the upstairs kitchen and the two enclosed porches on the side.

At the time we lived there the upstairs porch was screened for sleeping as there was no air conditioning. The house was "cooled" in the summer by a gigantic whole-house fan that exhausted into the attic. Sometime in the 50s my folks installed window units to cool some of the rooms. We used to dash from cool spot to cool spot. It appears that subsequent owners have upgraded to central air.

My room was on the 2nd floor on the corner above the porte-cochère, but my favorite place to sleep was on the porch. 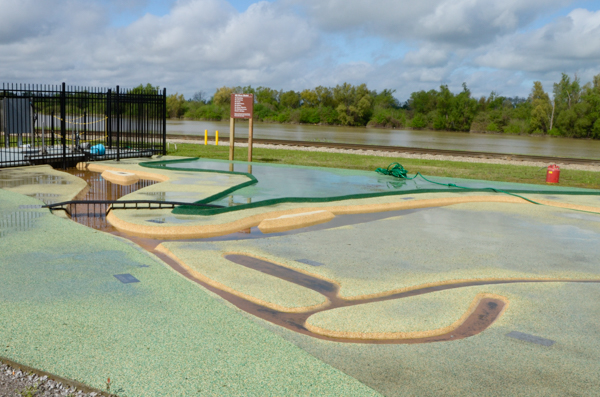 This model of the Mississippi River did not exist when I was growing up. There was a different kind of model at the Waterways Experiment Station used to study the dynamics of the river. It was a popular Girl Scout field trip destination but was dismantled years ago. A larger version was constructed at Clinton, MS. I never saw it. It still exists but is now derelict.

This portion of the model shows the current route of the Mississippi with the bridge marking the location of I-20 crossing the river. The Vicksburg Harbor is in the foreground with the Yazoo Canal running past the site of Vicksburg and the oxbow Lake Centennial, which indicates the course of the river prior to 1876. The actual canal can be seen in the background.

Fort Hill overlooks the canal and harbor at the lower end of this picture. We will visit there later.

Long Lake, which we will also visit soon is just out of this picture to the right. 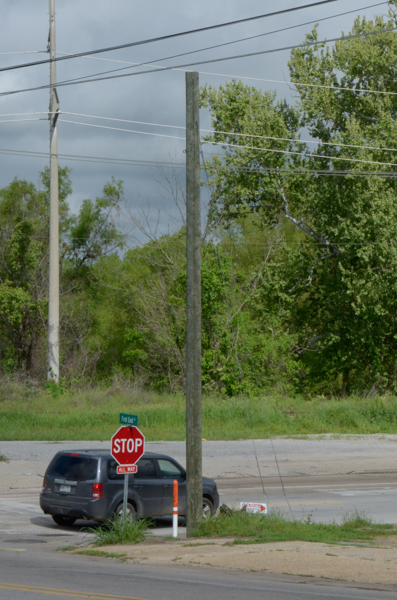 Jim asked me why I was taking a picture of this nondescript intersection just north of the model above.

All of my growing-up years we had a fishing camp north of town. We spent many weekends there and passed this intersection on the way. The Long Lake Club, where we had our fishing camp, employed a caretaker, Matt Harris. He was a confirmed bachelor & a veteran of World War I. Mr. Matt had a house on the club property. It had no electricity and no indoor bathroom. I'm not sure if it had indoor plumbing of any kind. Understandably he spent a lot of time at our camp!

He had no car so if he needed to come to town for some reason, such as buying groceries, he would either catch a ride with a friend, hitchhike, or walk the 10-15 miles.

If he was in town of a weekend, he would frequently wait at this intersection for a ride back to the lake. We often gave him a lift. 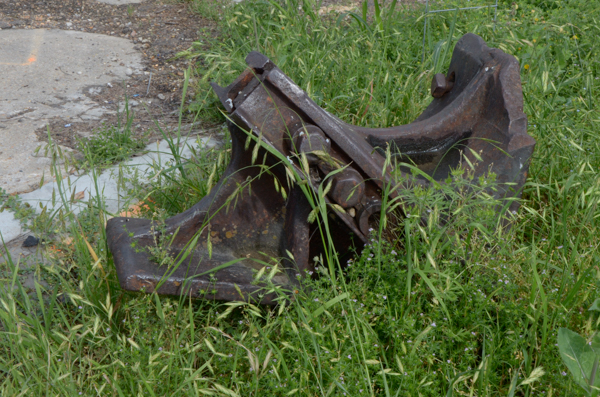 This bumper stop at the end of a rail spur at the intersection above is where I remembered Mr. Matt waiting. Not very comfortable looking!

On the other hand, my brother remembers that there used to be a nearby store with benches where folks would sit. That makes more sense, but it isn't my memory. 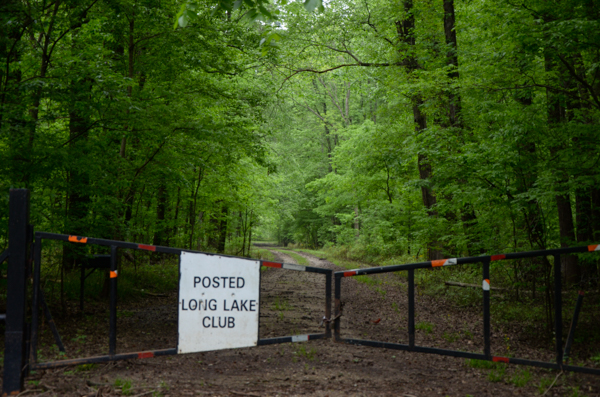 My folks sold the place in the late 1970s so we couldn't get in to see if our camp was still there. It was an old streetcar on stilts with a screened porch on one side and a large room on the other. It was pretty primitive, but we loved it and spent many happy times there. My father said it added 10 years to his life because it had no phone. The only way to reach him was to drive to the locked gate and hike in. That only happened once that I can recall -- when my grandmother died.

Although it did have electricity, in the early days the only water came from a cistern that collected water off the roof. Later a well was put in, but the water was not potable. Most of the times that I remember, we carried water to & fro. Eventually the well was upgraded so we had running water that could be used for cooking and drinking!

In the years since this trip I have heard from friends that the old streetcar has been purchased by someone who wants to restore it to use as a monument. That tells me that the old camp is no more. I hope they can successfully work things out. 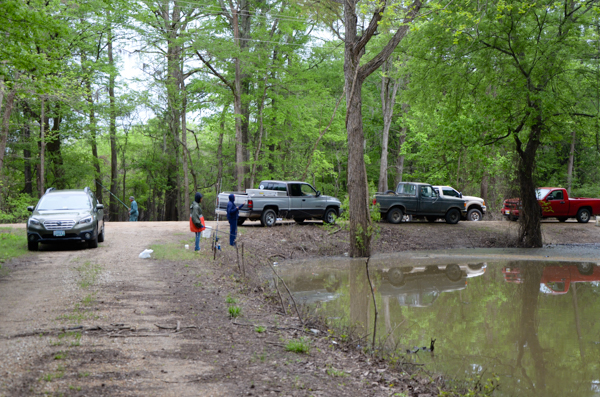 At the location where the road to the Long Lake Club turns off, the current high water made for good fishing for local folk. In years of very high water, the roads flooded and we needed a boat to reach the camp. Those were my favorite times! The water sometimes covered this road to a depth of 2-3 feet.

Because of the stilts our cabin was never flooded until the 1970s. There was a huge flood in 1973  that did. Several others in the succeeding ten years came close and at least one of them also got in. 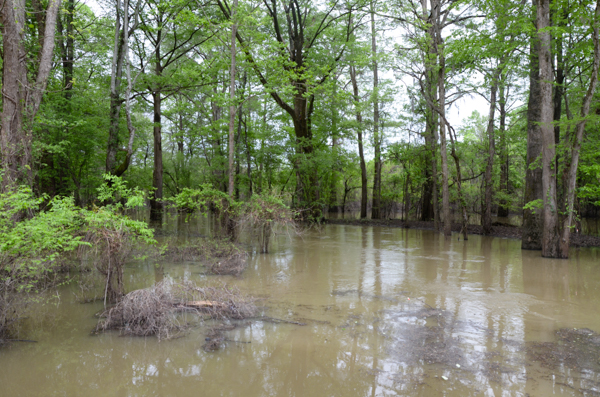 McNutt Lake does not normally reach the road here. A small whirlpool in the water here indicates that the water is now receding.

Mr. Matt, the Long Lake caretaker, died one year during high water. His body was found in his boat in McNutt Lake. The doctors speculated that he had a heart attack.

Even though we could not enter the club property, there had once been a small community across a slough from our old camp. The community has been pretty much abandoned because flood insurance is no longer obtainable.

We drove back some of the roads that weren't still underwater (we were glad for our AWD Subaru!) to get this picture. It wasn't possible to see if our cabin was still around, but the view would have been very similar from it. 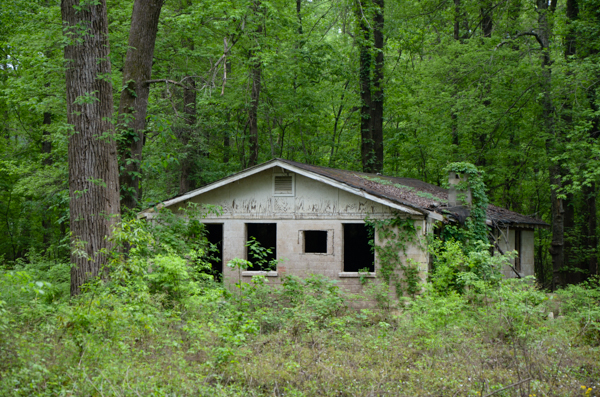 One of the abandoned buildings in the Long Lake community. This one was cinder block and still standing, but still subject to the floods.

An adjacent wooden building was collapsed in ruins.

We saw only one building, high up on stilts, that appeared inhabited, but it had enough "trespassers will be shot" signs that I decided not to stop and take a picture! 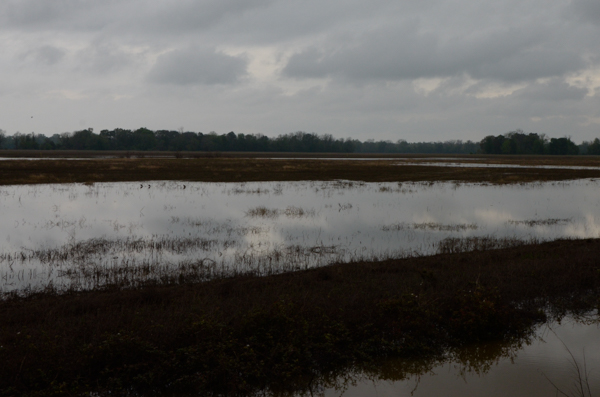 After exploring the abandoned village, we continued out the Long Lake Road to the Kings Point Ferry. Many of the fields we passed were still partially flooded.

It's pretty rural out here. I could almost hear Jim humming the theme from Deliverance. He was glad to get back to civilization. 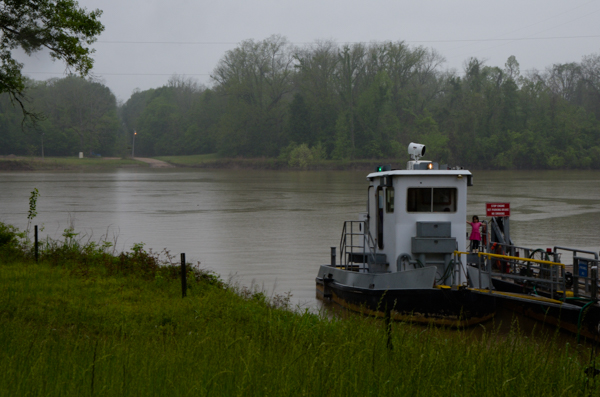 After an extensive drive on a gravel road along fields such as the above, we reached the Kings Point Ferry across the Yazoo Canal, which was also at flood stage.

The ferry runs between 6am and 6pm, but has no particular schedule. When someone shows up and needs to cross, the ferry takes them. It holds four cars.

After visiting the ferry, we drove back a long way to the highway to return to Vicksburg. It wasn't until I was putting together this write-up that I decided to check online maps to find out where the road went past the ferry. As it turns out, we were only just around the corner from the harbor where we started our excursion to Long Lake!