The Te Waonui Forest Retreat was our home for the next two nights. The manager and two Maori dressed in traditional clothing welcomed us. Road Scholar has been trying to shake the "hostel" image of dormitory accommodations for years, but we don't normally encounter a hotel quite as lavish as this one. Our guides said that the group usually stayed somewhere more modest. I'm not aware of any complaints over the upgrade!

The hotel's construction minimized its impact on the surrounding bush. Plantings of native varieties filled in what inevitably had to be disturbed. It was like living in the rain forest. Good food. And free unlimited wi-fi -- an incredible luxury in New Zealand! 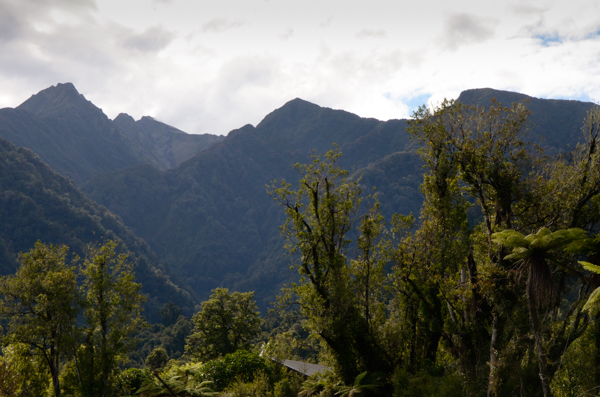 Unlike the European Alps, the mountains come down to sea level, so they are mostly forested.

When Sir Edmund Hillary was asked how he got such extensive mountain experience growing up in New Zealand, he pointed out that although Mt. Everest may have a peak elevation of 29,029 feet, it has a rise of only 11,431 from the base camp located at 17,598 feet. Mt. Cook, on the other hand, has a peak of 12,316 feet with a base camp at 2,500 feet -- a rise of 9816, almost as much. He asserted that climbing Mt. Cook was more difficult than Everest -- except for the lack of oxygen.

The spiky trees are cabbage trees, so named because their tender heart tastes somewhat like cabbage when cooked. It was a staple food of the Maori. 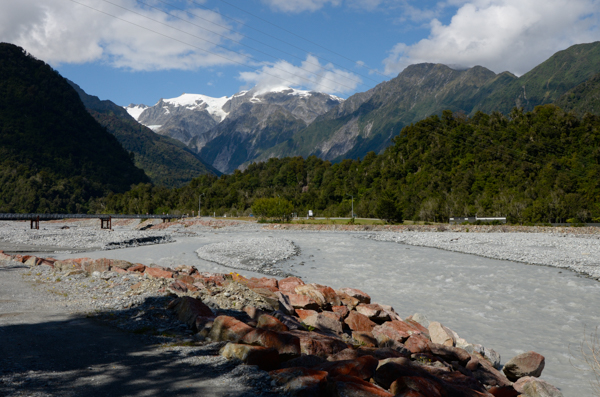 The Waiho River, a typical braided stream, has its source in the Franz Josef Glacier. Its bed has built up by rubble washed down from the glacier such that the township is below the level of the river. Levees keep the river from overflowing the town, but there have been talks about relocating to higher ground.

The water is filled with glacial silt (or "flour" as the Kiwis called it) to give the milky color.

In very rainy weather or if an ice dam within the glacier gives way, the river can rise dramatically to fill this entire riverbed. Don't believe it? Check this YouTube video. The bridge in the video is the one seen here. 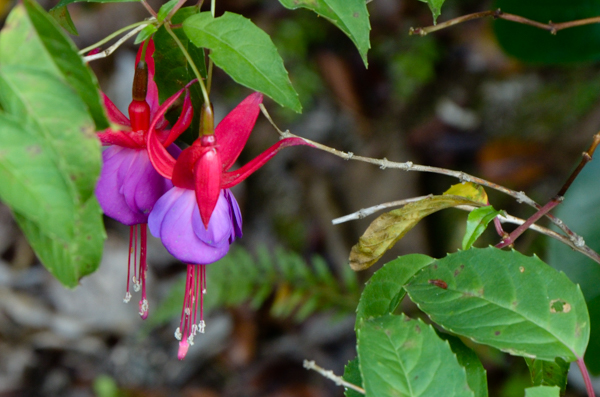 I had not been aware that fuchsia was a native New Zealand tree (this isn't it -- check the link).

It is one of the few deciduous trees native to the country. 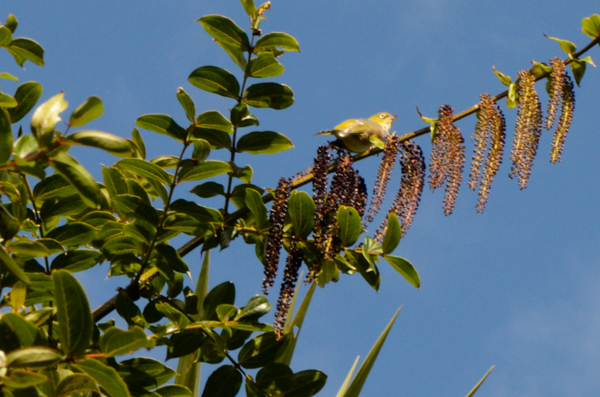 The small yellow bird is a Silvereye.

Birds are amazing creatures. These little songbirds spread from Australia to New Zealand in the mid-19th century. The colonizers flew over 1000 miles across the Tasman Sea.

That seems impossible until you think that tiny hummingbirds at our feeders in Virginia fly to South America for the winter.

This was our first glimpse of the glacier. It has retreated in recent years. The grey scars along the lower mountainside show its former extent. 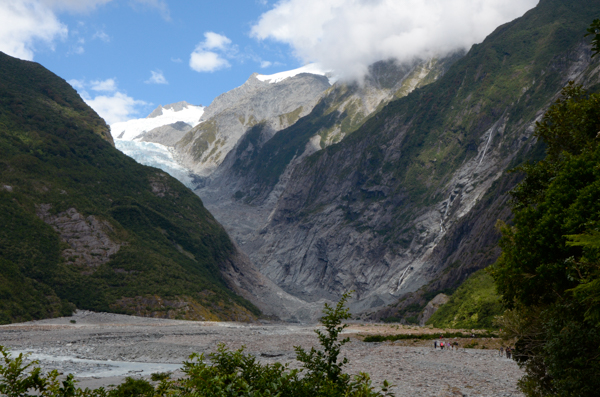 The young forest we walked through has grown up since the Little Ice Age ended in the late 18th century. Past the forest we reached the valley of the Waiho.

The scale can be estimated by the tiny figures of hikers on the trail at lower right. 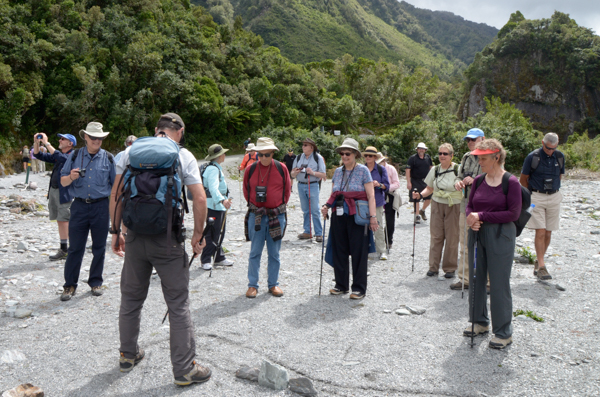 Our guide with Glacier Valley Ecotours explains how the mountains were created and glaciers formed.

This area is the interface between the Pacific and Australian tectonic plates. The massive Alpine fault, equivalent to the San Andreas Fault in California, runs through the Franz Josef township. The displacement along this fault when it slips is impressive.

It is due for a major slip any moment now. (Really!) 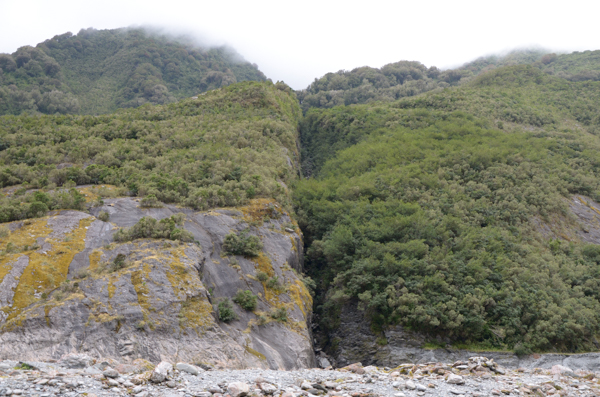 The crease marks the line of a smaller subsidiary fault. It continued across the river valley and into the mountains on the opposite side.

New Zealand is sometimes called the "Shaky Isles" and it is easy to see why. 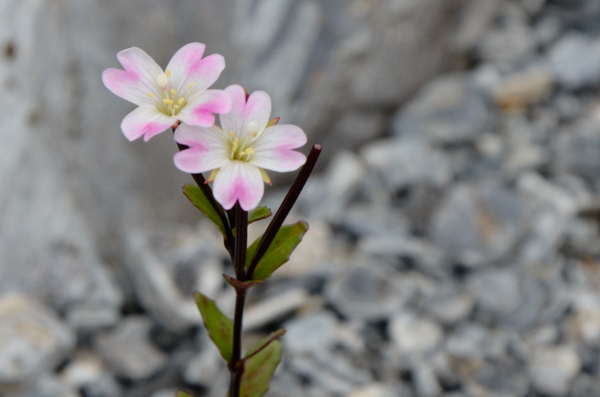 And yet in the desolation of the river valley, there are delicate flowers that colonize the barren rock.

These were usually white; this is the only pink one that I saw.

It may be a willow-herb. 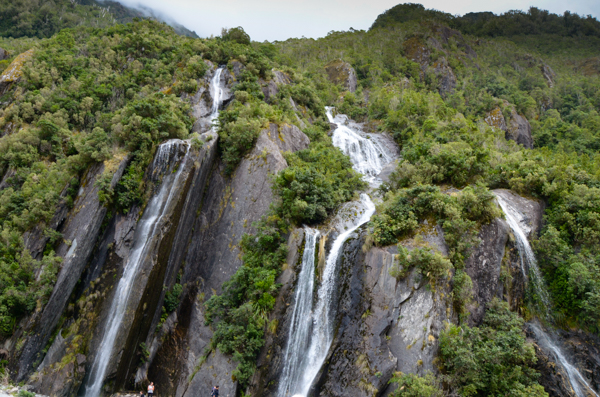 Trident Creek Falls was the most impressive of the many waterfalls. Tiny people in the bottom of the picture show its size. 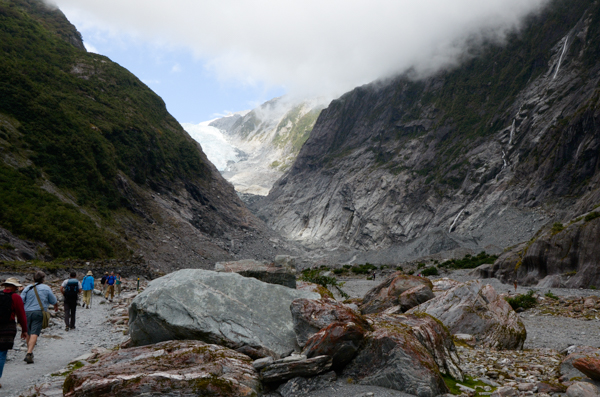 As we approach the foot of the glacier, I was surprised at the folks who yearned to touch the ice. (We weren't allowed to get that close.) Jim & I forget how privileged we have been over the years. As skiers we have had plenty of glacier experience.

After this point the trail got steep and rugged.

The red on the rocks is from algae. 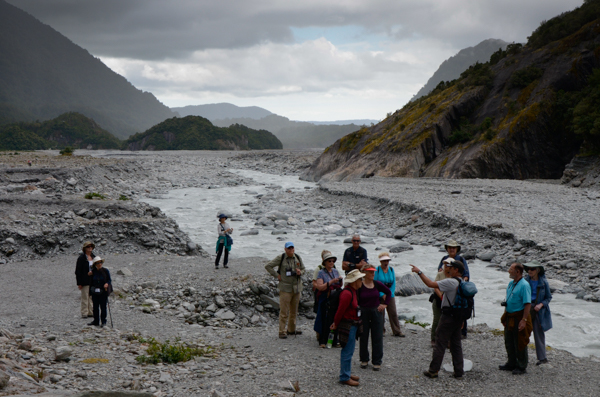 We hear further explanation of the surroundings and what they signify.

A rain shower is moving up the valley and I thought we would get wet, but it turned out to be only a mist for a short while.

Everyone had come prepared with jackets although it was a warm day. 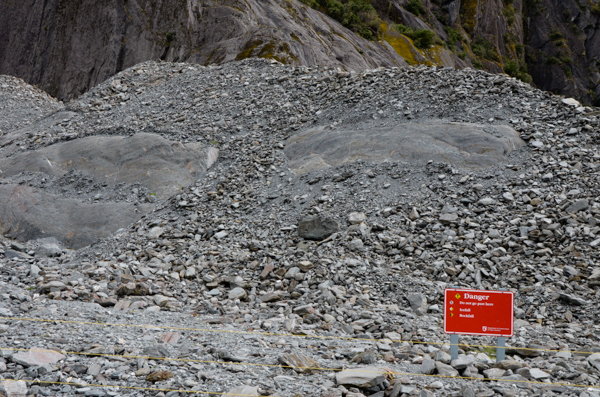 This isn't anyone's idea of a glacier, but here it is.

It seems odd that the sign would warn of falling ice when there is no ice to be seen... 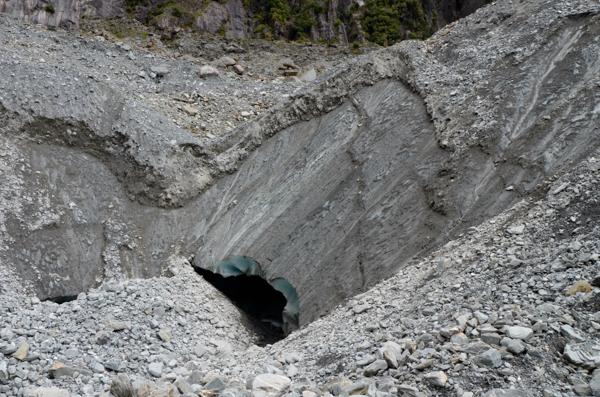 This cave shows that the ice is melting from beneath. There was a constant pitter-patter of small stones as they rolled down this steep face.

Our path was on terra firma ... I think. 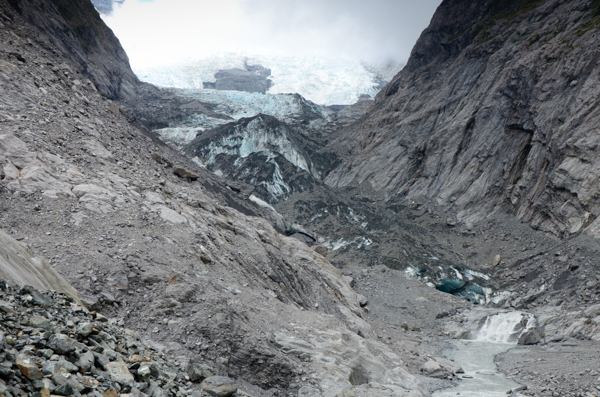 This is the closest we got to the main glacier. Meltwater  pours out from the ice to feed the river.

This is the bitter end of a glacier. Anyone expecting white snow fields and blue crevasses was disappointed.

Helicopters fly to the upper glacier, weather permitting. The following day a group of German tourists at our hotel was on tenterhooks awaiting clearance for their helicopter flight. They eventually got the green light. 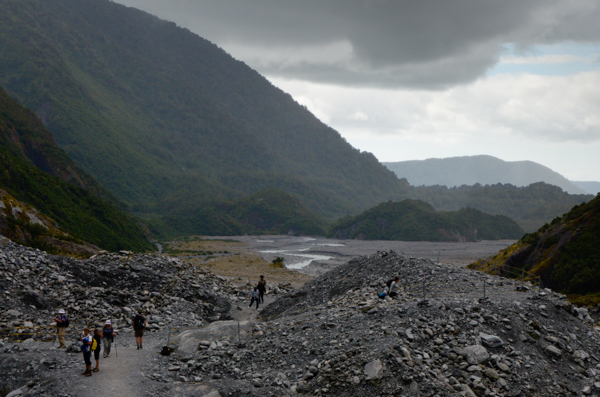 Now that we've achieved our objective, it's a long walk out with plenty of opportunity to ponder the intersection of barrenness and inexhaustible life as lichens, mosses, and plants recolonize the rocks. 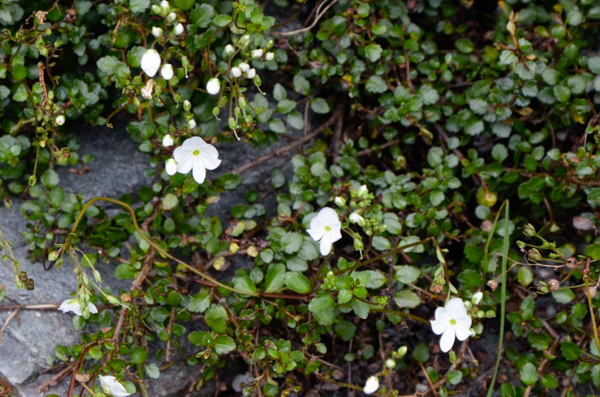 In a spot where the forest has been more firmly established, trees are inexorably making big rocks into little rocks.