We spent much of one day in Queenstown on an excursion to a demonstration Sheep Station (we would call it a ranch). Afterwards we had free time to explore the area.

Sheep farming is a critical contributor to the New Zealand economy and we heard many jokes about the number of sheep in NZ as we planned our trip. When the government ended subsidies in the 1980s, however, sheep farming became less profitable and began to decline.

Jim and I set out early on foot with the idea of visiting the botanical garden prior to our lake excursion, but we didn't allow enough time.

The TSS Earnslaw is at dock waiting for its first departure.

The woman on the right of the picture is paddleboarding. We had never seen this before, but there were several folks out in the morning before the jet boats started doing 360s in the lake. It looked challenging but fun. 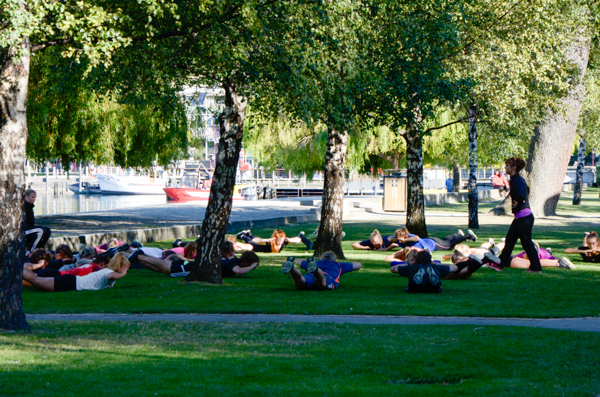 Other early risers were out on the green for a Pilates class.

Another group was doing yoga.

After arriving at the sheep station we proceeded to the demonstration shearing shed. Chas advised us on the best seats for both the shearing and herding demonstrations and he was right on.

The farmer wants to keep the sheep as comfortable as possible. He explained that he waits until she relaxes before staring the shearing. I'm sure it minimizes struggle and makes life easier for both. She seemed quite docile throughout.

Once he got down to business he tucked the sheep's right front foot behind his leg to stabilize her. He then proceeded to show the sequence in which a sheep is sheared.

Professional shearers work much faster and there are as many as ten at work in a single shed. He told us how many minutes a pro takes. I don't recall what he said, but the WWW asserts less than two minutes per sheep. New Zealanders hold world records for shearing, e.g., 720 ewes in 9 hours! That doesn't give the sheep much time to relax.

This particular type of sheep produces coarse wool suitable for carpets. The wool is cleaned, baled, and shipped to China for processing.

Chas had a card he sent around the bus with the various grades of wool from merino (very fine) to meat breeds, which produce coarser wool that is still usable for some applications. The wool is graded in microns. 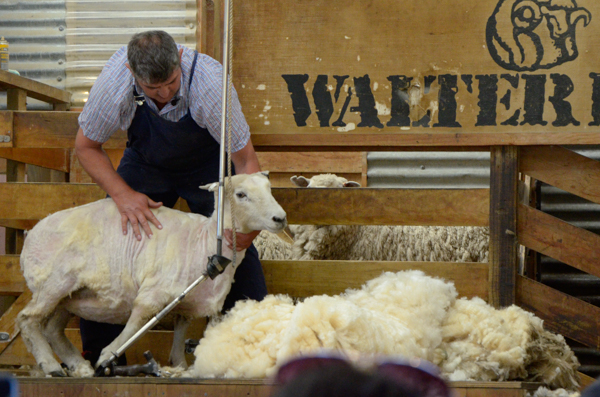 The sheep is much lighter now!

Chas told us that individual farmers have preferences on when to shear sheep. His own choice is to shear them shortly before they lamb. If the mother sheep is too insulated from the weather she will be less likely to protect her lamb from cold or stormy extremes. (Sheep aren't real bright.) If she is cold and wet herself she will head for shelter and the lamb will follow.

Likewise he likes to keep ewes with twins on smooth pastures because if the pasture is rough, she might lose track of one of her lambs. 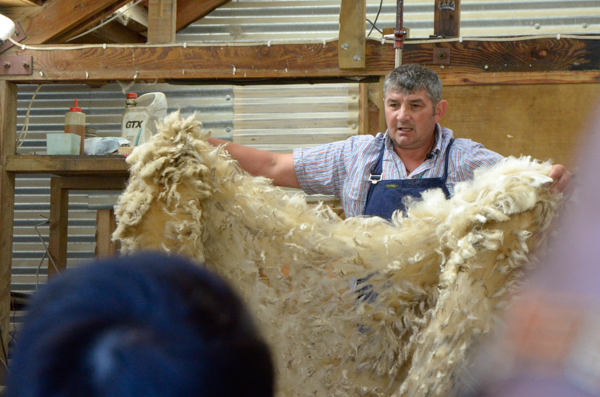 Chas gave us the story of "a year in the life of a sheep." There are numerous critical events such as shearing, breeding, lambing, mothering, etc. If a sheep fails to measure up at any of these times, e.g. is hard to shear, fails to conceive, has difficulty lambing, rejects its lamb etc., she is "sent down the road." Male sheep are usually sent down the road as a matter of course.

"Down the road," of course, means "to the packing plant." Thereafter when any of us was late, got lost, made too much noise, etc. he or she was threatened with being "sent down the road!" 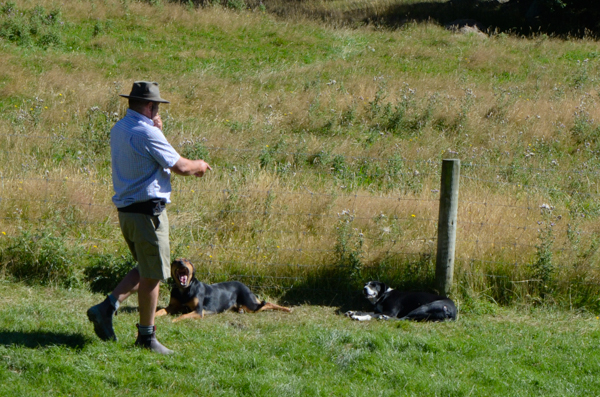 NZ farmers principally use two types of dogs when working sheep: the Huntaway, shown on the left, and the NZ Heading Dog, shown on the right.

The Huntaway is bred to move sheep by barking. The heading or "eye" dog is silent and works the sheep by staring them down.

Chas had warned us that the dogs used in the demonstrations were not top-of-the-line and the farmer introduced them by saying his eye dog was retired and the Huntaway was just being trained.

The farmer dispatched the eye dog, which looks a lot like a Border Collie, into the woods to find and bring out the sheep.

She took off and shortly thereafter reappeared with this small group of sheep.

The dog can just be seen in the shadows. 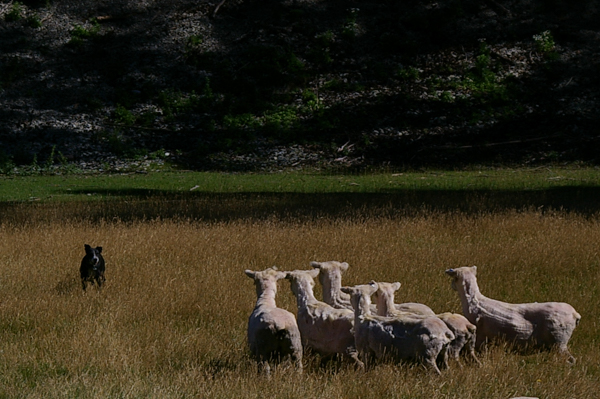 The sheep are not inclined to come into an enclosure so near a passel of strangers clicking cameras. They are kept from bolting back into the woods, however, by the dog's hairy eyeball. For a time there was a face-off. 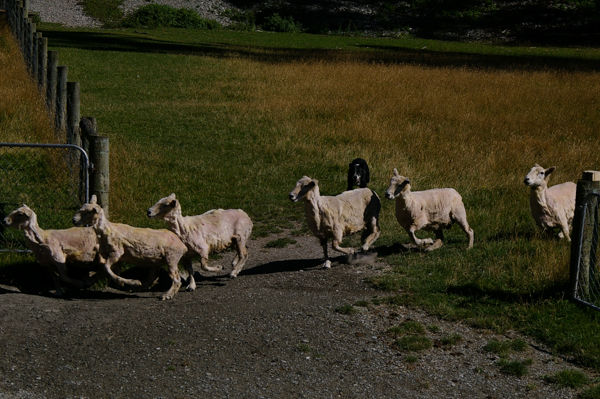 The farmer commanded the dog with whistles. Working together they successfully brought the sheep into the fold. 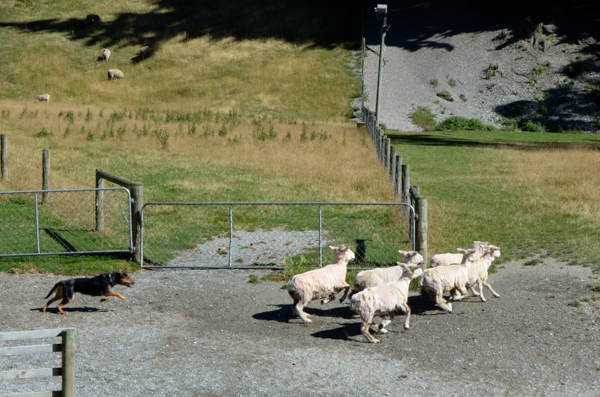 Getting them back out again was no problem for the enthusiastic and noisy Huntaway. Not a lot of finesse here!

After the sheep demonstration, we enjoyed the gorgeous view toward Queenstown from our reserved tables on the ranch house deck. Our weather luck had returned.

The food was delicious: barbecued meats, roasted corn and other veggies, salads, and yummy desserts. 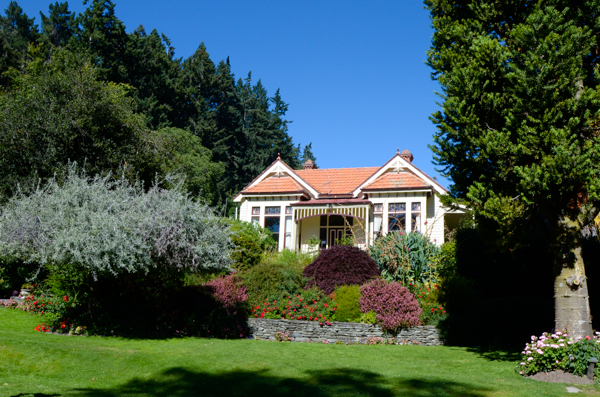 Walter Peak Station was once one of the largest sheep stations in NZ. It is now dedicated to tourism and telling others about the ranching lifestyle in NZ. We had not signed up for the "farm tour," which included this homestead, faithfully rebuilt after a 1977 fire, but did have time to wander and visit the animals. 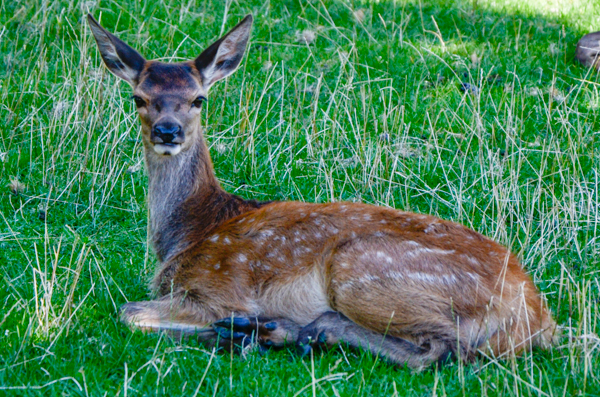 A small family of Red Deer represented the importance of deer farming to the NZ agricultural economy.

There was also a llama, but alpacas are more commonly used in farming because of the fineness of their wool. In the US llamas are used to protect sheep from predators, especially dogs and coyotes, and maybe that is also the case in NZ. Well, maybe not coyotes.

A few Highland Cattle were also available for visiting and feeding. Even the bull seemed tame. They are not the most common cattle in NZ. Angus, Herefords, Banded Galloway, and Charolais are more often used for beef farming. Most dairy cattle are Holsteins, which are called Friesian here, and Jerseys.

I think the sheep was a Suffolk. It was friendlier (greedier?) than most sheep I've met. 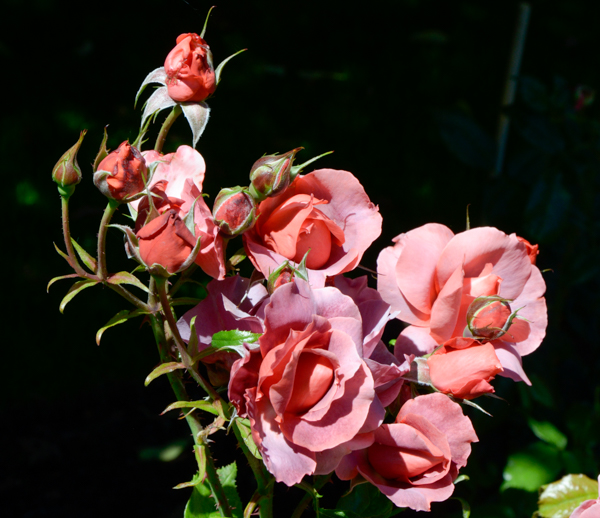 After returning to town, Jim and I resumed our interrupted walk in the Queenstown Gardens.

There are some native plantings, but mostly we saw introduced plants like these beautiful roses.