The next morning we departed early for a cruise across Lake Manapouri to cruise Doubtful Sound. Fiordland's primary attraction is Milford Sound, which is farther north, but our guides told us that was crowded with large cruise liners as well as the smaller providers. In contrast we didn't see any other ships in Doubtful Sound.

As usual we arrived at the boat dock in plenty of time. The sun was just coming up behind the eastern mountains.

The folks who established Real Journeys, the company that took us to Stewart Island, the Glowworm Caves, Doubtful Sound, and later to Walter Peak Station in Queenstown, are leaders in conservation in Fiordland National Park and elsewhere.

As we traveled along Lake Manapouri we saw many more instances of "treelanches."

Growth has not yet returned to these scars, so they are probably relatively recent.

Water from the lake passes underneath the mountains into Doubtful Sound as it feeds the generators of the Manapouri Power Station. Workers at the power station commute to their jobs by boat, just as we are.

The intakes for the Power Station are adjacent to the road we will take over the mountain crest.

Tours are usually available, but the power company is upgrading the facility and it was closed to visitors while we were there. Too bad.

85% of the output of this plant is dedicated to a large aluminum smelter outside Bluff. The smelter was the reason the plant was built. As mentioned earlier, controversy surrounding the design has been posited as the birth of the NZ Green Movement.

I recall hearing that if the electricity was no longer needed for the smelter, this plant could supply the entire South Island with electricity. Recycle those aluminum cans! 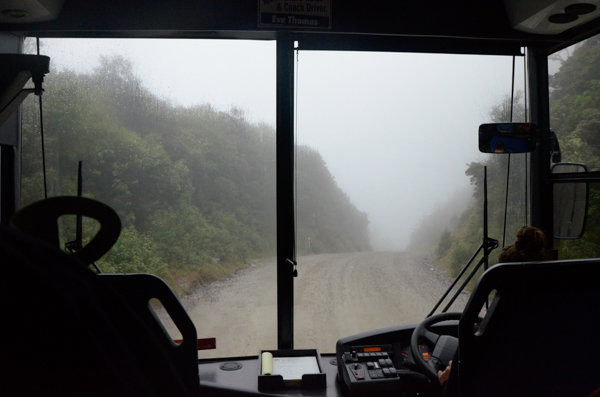 Engineers constructed the road between the lake and the sound with the rock removed while excavating the station. The buses have special breaking systems to cope with the steep inclines.

The Westland of NZ is the wettest area of the country with over 200 days of rain on average and an average rainfall of 22 FEET a year.

Of course it rained.

The name was originally "Doubtful Harbor" and it was given by Captain Cook as he explored the NZ coastline in the 18th century. The entrance is narrow and he was concerned that if his sailing ships entered they would find it too narrow to get out. As it happens, that would not have been a problem, but he couldn't take that risk. 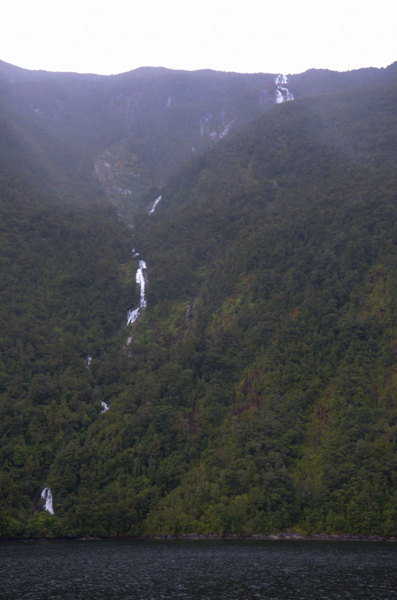 Our captain was right about the waterfalls. There were plenty of them.

This one, however, brought up a whimsical question. Is this really a waterfall or just an exceptionally steep and fast flowing river?

Another more serious question was the difference between a "sound" and a "fiord." Here's the official answer:

A fiord is a glaciated valley - typically narrow and steep-sided - that has been flooded by the sea after the glacier's retreat. A sound, on the other hand, is a river valley flooded by the sea following a rise in sea levels or depression of the land, or a combination of both.

Doubtful Sound is really a Fiord, but I'll stick with the common term. 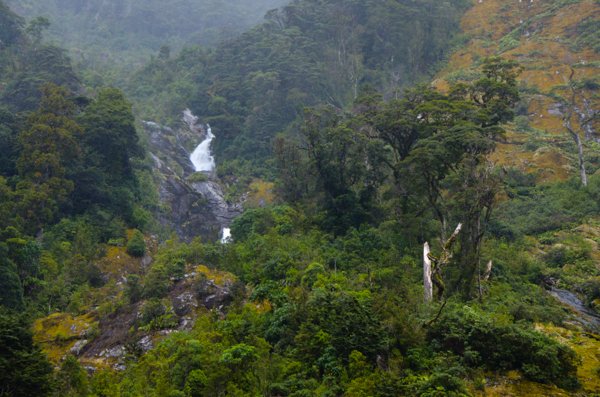 Nice waterfall on the left, plus the growth shown on the upper right is vegetation reclaiming a "treelanche" scar. First come mosses and lichens, then smaller shrubs. Eventually trees take hold again. 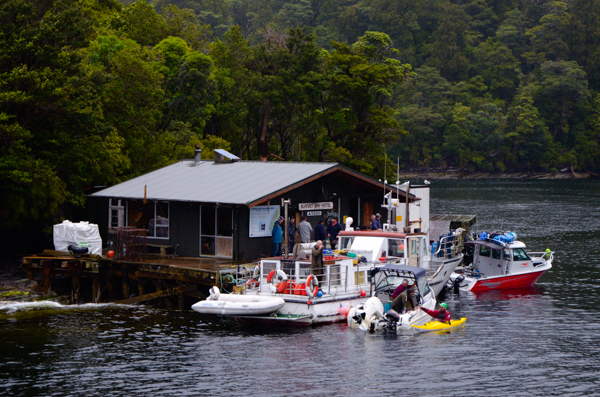 I'm guessing the "Blanket Bay Hotel and Jailhouse Cafe" doesn't cater to many overnight guests except the ones who bring their own accommodation.

Seems like a popular place though. That's at least three boats not counting the kayak. 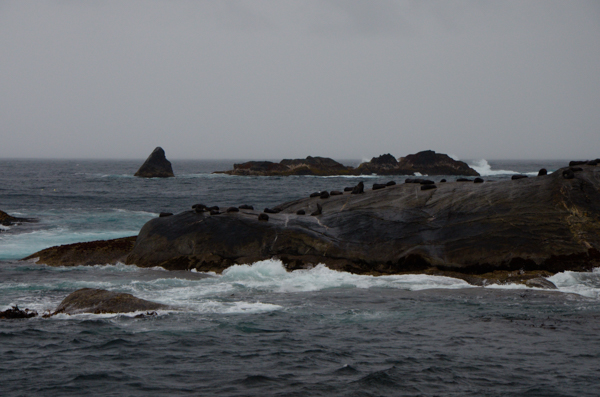 The northern entrance of the sound opens to the Tasman Sea.

These offshore islands are responsible for the quiet waters of the sound. There were numerous fur seals hauled out on the rocks.

I was disappointed that this was the only wildlife. I was hoping to see a Fiordland Penguin, but it was not to be. At one point there were cries of PENGUIN!, but I never saw anything.

We went a little way out into the open sea to the southern entrance. It was a brief but bumpy ride.

Looking down the Fiordland coast. The entire park is filled with fiords. When I asked how they compared to the Norwegian fiords I was told that Norwegians visit New Zealand just to see Fiordland.

I'd still like to return to Norway to visit the fiords and make up my own mind on the subject. 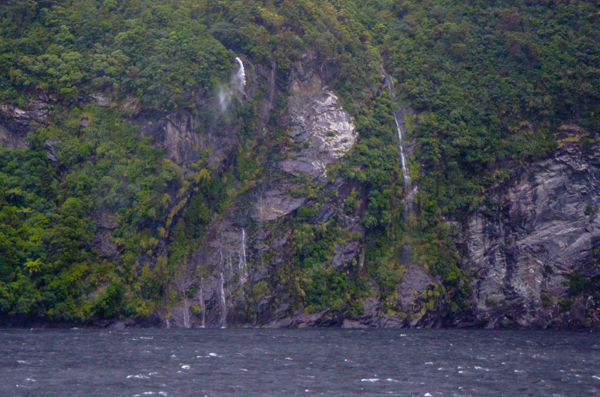 By this time the wind has picked up in the sound, as can be seen in the whitecaps.

These waterfalls were blown apart by the wind. 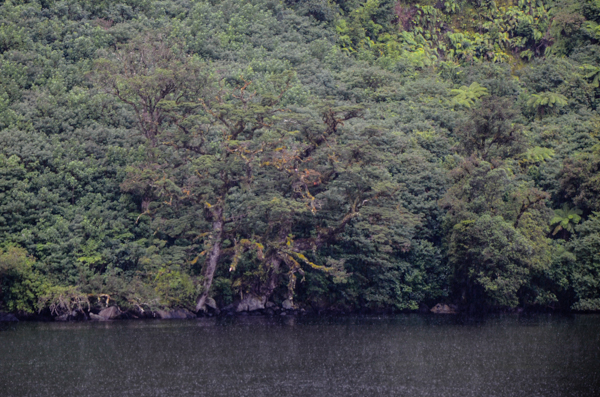 The best part of the Doubtful Sound excursion was when the captain pulled into a sheltered cove and turned the engine off. Beforehand he requested that no one talk, take pictures, or make any other sounds. Most people complied.

It was magic. We could hear the rain on the roof, the sound of waterfalls, birdsong. I expect it was only about five minutes, if that, but it seemed timeless.

Afterwards I took this picture to remind me of the place.

The two ancient beech trees at the water's edge could be Middle Earth Ents. 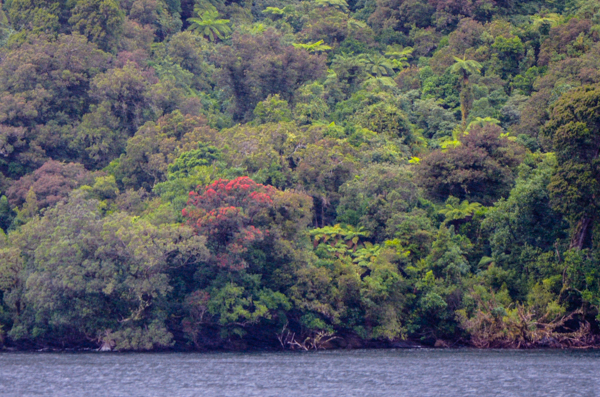 Another sighting of Southern Rata. There were quite a few in the sound, but all but this one were much higher up the mountains. 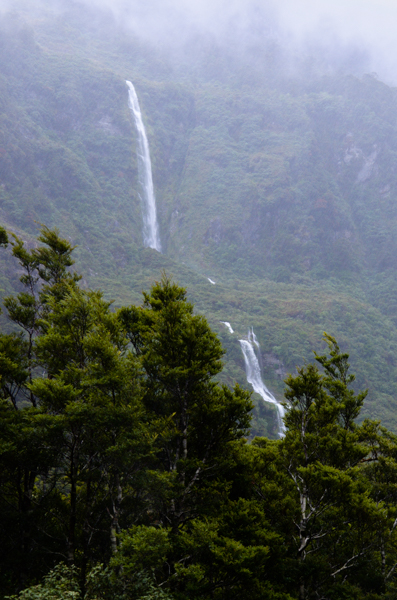 Our bus driver had promised us that, weather permitting, she would stop at the crest of the pass for a view back over the sound. Weather didn't permit. There was no view.

The consolation prize was stopping for the Cleve Garth Falls. It was easily the largest waterfall that we saw.

I don't think anyone would call it a very steep river. 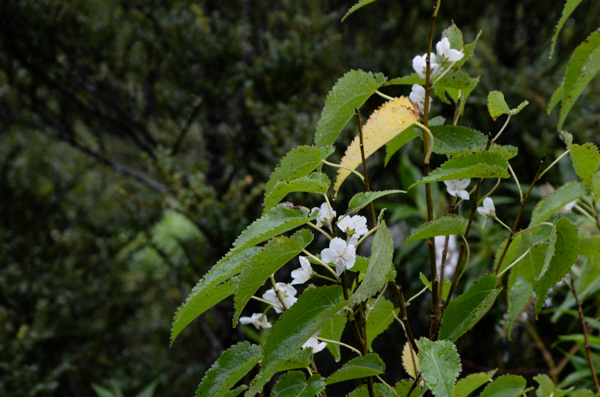 Across the road from the waterfall I found this flowering shrub. I've not been able to identify it. There were many other flowering plants along the road higher up towards the pass, but we didn't stop. This picture stands for the ones that got away.