The best part about our visit to Stewart Island was the cruise to Paterson Inlet and Ulva Island. 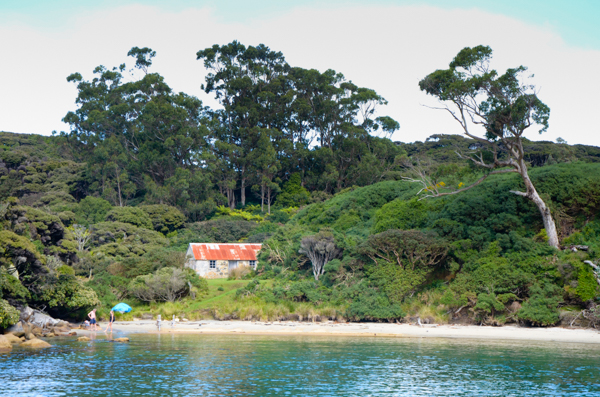 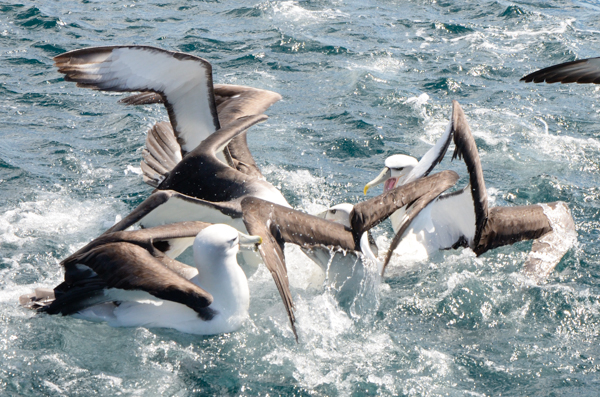 As our boat left the harbor, the mollymawks came calling.

Mollymawks are smaller than the great albatrosses and are in a different genus.

The crew tossed fish heads to entice them to perform for the tourists.

These are White Capped Mollymawks. 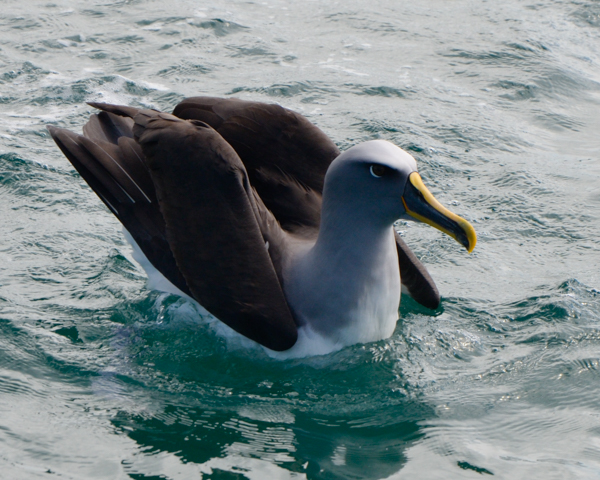 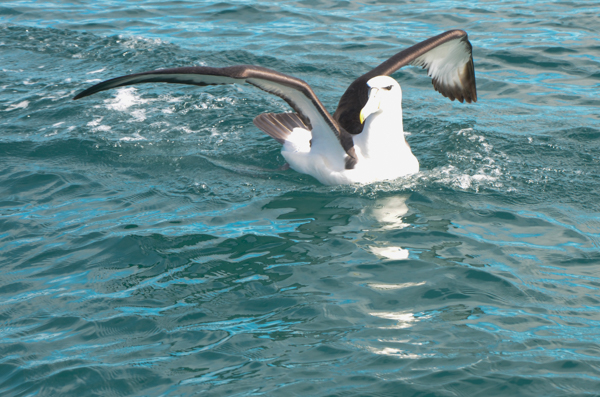 The White-capped Albatross, or Mollymawk, doesn't have the grey-shaded head of its cousin.

Neither of these two species breeds in the area. 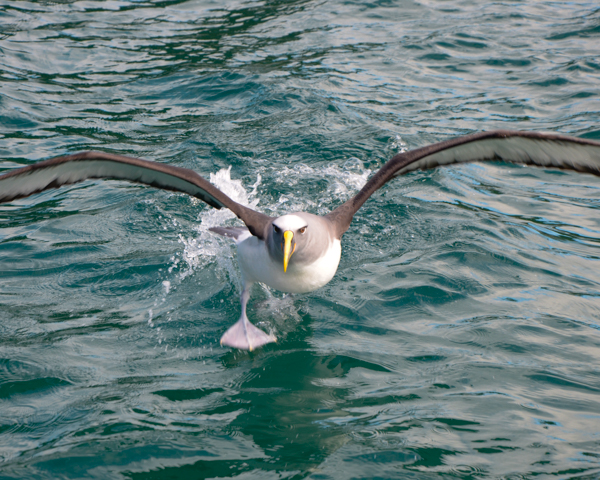 It is not easy for these large birds to take off in the absence of  a good breeze. They have to run along the water to get enough airspeed to take wing.

It was also interesting to see them coming in for a landing with both of their large feet extended for a skidding stop.

But there is no bird that exceeds the ability of the albatross to fly with minimal effort as it gracefully uses every thermal and breath of air. 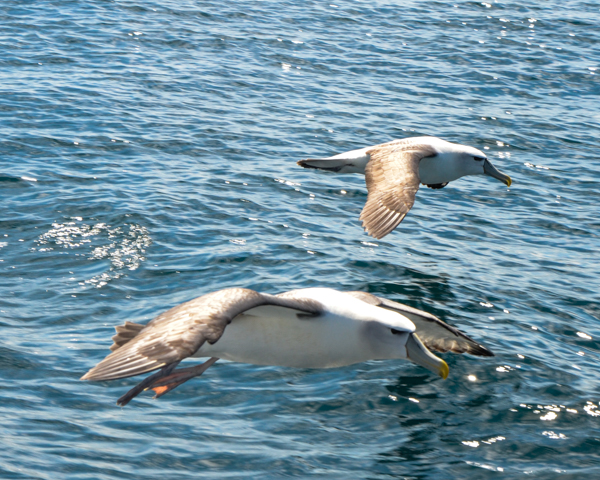 I'm always so excited when I get a good picture of birds on the wing! These are Salvin's Mollymawk. Aren't they glorious?

Digression: Back in the 70s when I read Jonathan Livingston Seagull, I was outraged by the author's implication that the flight of a falcon was superior to that of a seagull (at least that's the message I took away from the story). I hadn't seen a lot of falcons, but I had watched plenty of seagulls and they are masterful flyers. Albatross are more so.

Just because I'm not like you is no basis for comparison. We are both beautiful. 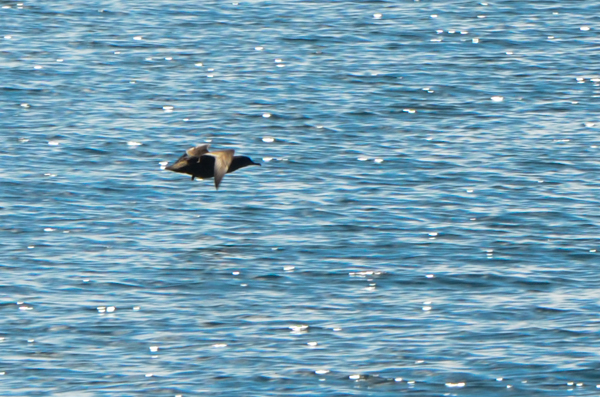 A sooty shearwater. These are locally known as muttonbirds.

One of the pre-trip reading books (The Bone People) had mentioned muttonbirds. I was pleased to connect the bird with the story. 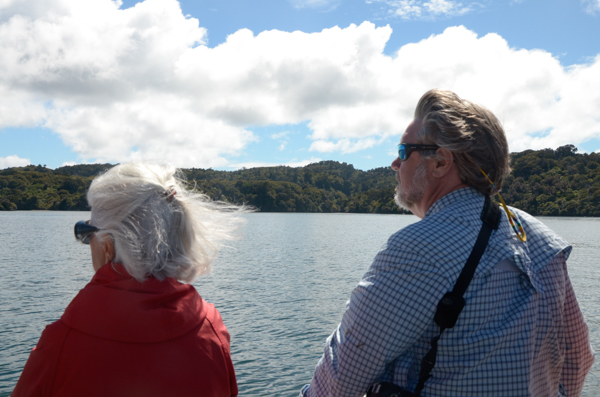 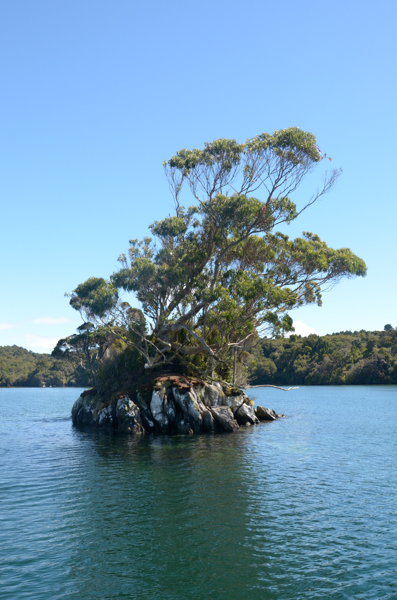 There was quite a discussion about this island, which was used by whalers as a landmark, but I can't remember the details, and for once, Google doesn't help me out.

A Norwegian Whaling base in Paterson Inlet was active as a repair site for Antarctic whaling ships into the 1930s. 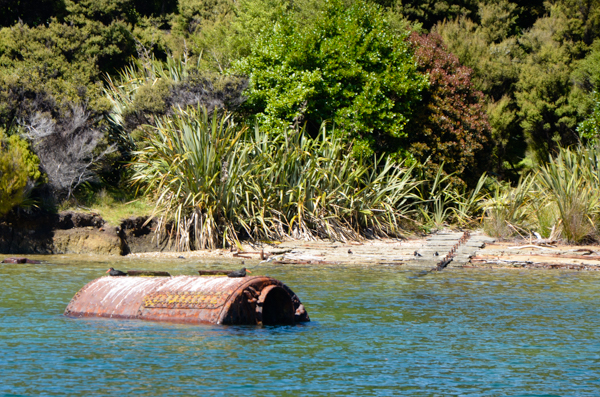 The base at Price's Inlet was known as Kaipipi Shipyard. It has recently been protected to discourage relic plundering.

The station operated until the 1930s to support whaling.

Whales have returned to this area recently although it isn't clear if they will ever fully recover.

The former bunkhouse at this site has been relocated to the Oban Presbyterian Church. 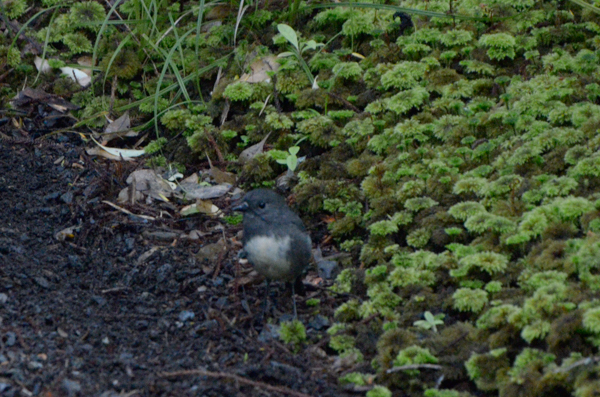 After cruising through Paterson Inlet we landed at Ulva Island, a wildlife and plant sanctuary. It is privately owned open to the public for guided tours. The island has been freed of predators, but constant vigilance is needed to ensure they don't return.

Our guide recognized this Stewart Island Robin from his song. She made a scrape in the forest floor, which enticed the bird to come looking for food. 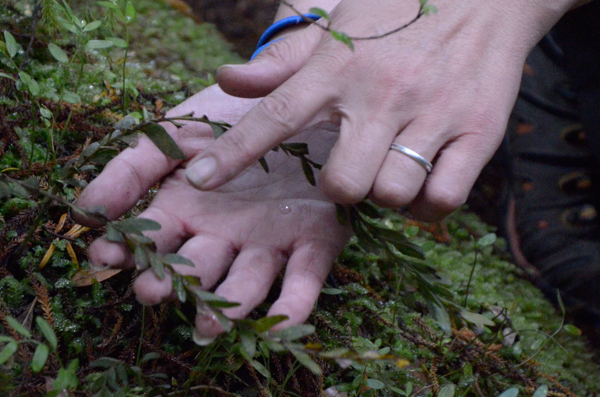 This inconspicuous-looking plant is a tmesipteris -- sometimes called a "dinosaur plant." We had also seen it at the Waiketere Reaches.

Although it looks like it has leaves, they are not true leaves.

This plant is believed not to have changed in 400 million years. It is distantly related to ferns, but lacks true roots. 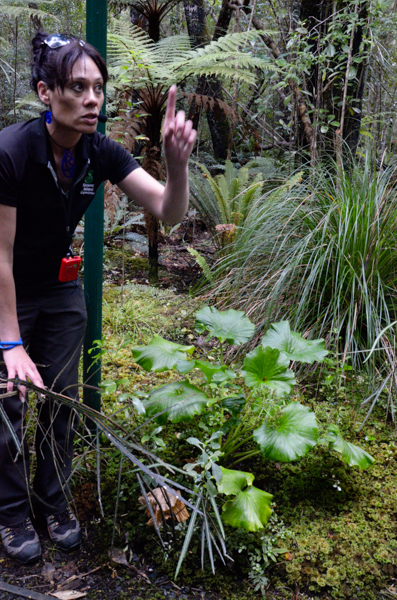 I cannot remember the name of this plant (the one with the big leaves). Our guide said it was extremely rare and had only recently been transplanted on Ulva Island.

The stems are hollow and in the past they were used like straws. 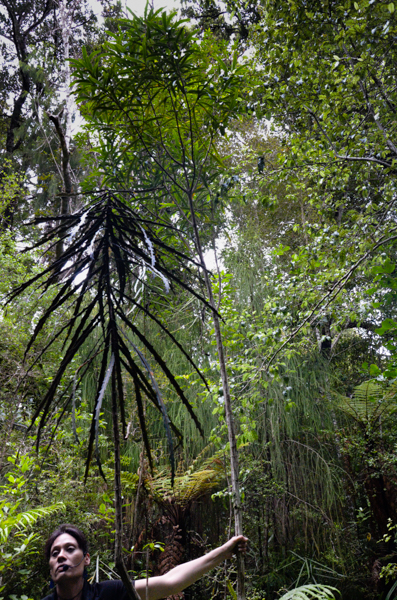 Here are two examples of a plant we saw throughout the islands.

To the left of the picture is a spindly looking plant with no branches and down-hanging leaves along the stem. The leaves are very dry and leathery with spines along the edges.

Our guide is holding a taller plant crowned with branches and feathery leaves.

These are the two growth stages of the same plant, lancewood or horoeka (at the link, scroll down to the lancewood entry).

Scientists quoted at the link have several theories about the foliage difference, but we were uniformly told that it dates back to the time of the moa. The tough leaves prevented browsing until the plant grew tall enough to be out of reach for the tallest moa. 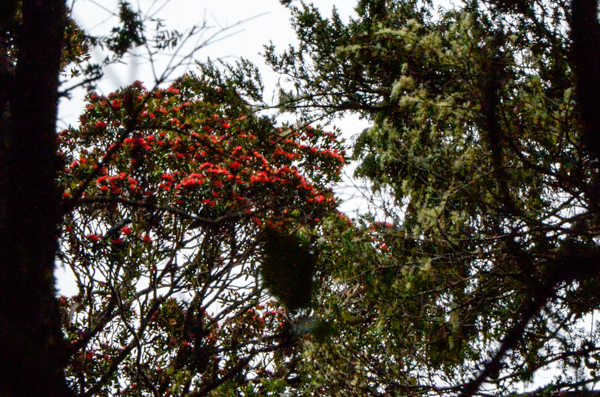 This Southern Rata tree (as above, scroll down for the rata entry) was the only one that we saw in full bloom. Unlike its northern cousin, the Southern Rata is not parasitic.

The shadow in front of it appears to be a bird. If so, I can't remember what it might be. 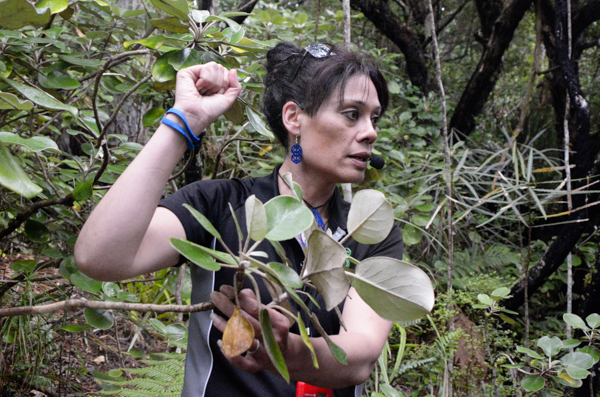 The common name of this plant is "muttonbird scrub," but it had a unique feature for early bush inhabitants: the leaves could be used as postcards! The soft underside made a good writing surface and ink could be fashioned from another common local plant.

The leaves were (grudgingly) accepted by the NZ postal service until well into the 20th century. 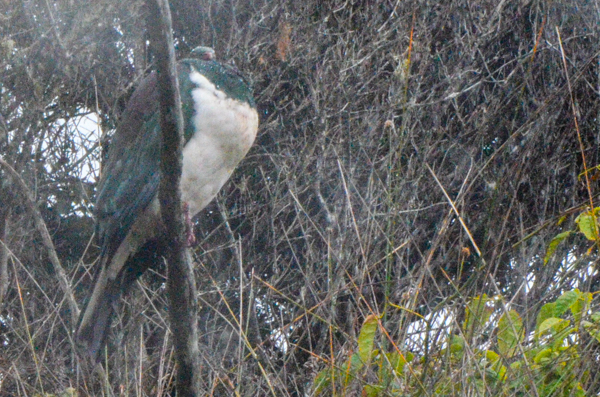 Partway through our nature walk it began to rain, sometimes quite heavily, so the clarity of this picture of a New Zealand Pigeon is affected by raindrops on the camera lens.

The pigeon itself doesn't look happy with the rain either, but we were astonished how birdcalls and activity increased after the rain started. Our guide said that was common -- especially since it had been very dry recently.

I'm sorry to say that the common rock dove was much more prevalent than this large and colorful species. 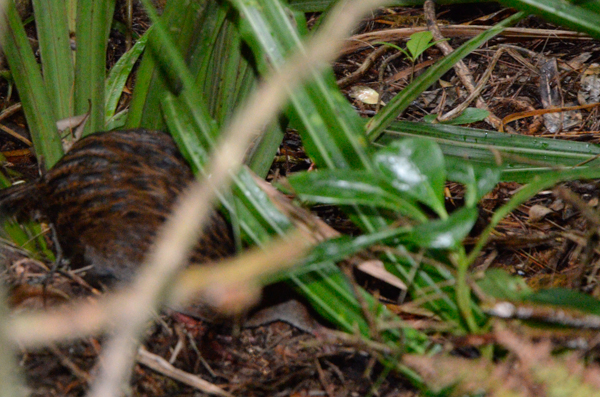 This is the rear end of a Stewart Island Weka. It did not oblige by posing for the camera, so this is as good as I could get.

Other rare birds that we saw that I didn't get any useful pictures of included the NZ Rifleman and the South Island Saddleback. More common birds were the Bellbird, Tui and a noisy flock of Brown Creeper.