We saw virtually nothing of Invercargill itself. Our primary reason for visiting was to make a day trip to Stewart Island, south of the South Island. Invercargill bills itself as the southern-most city in the world, but I think there are contenders in Argentina and Chile that would take issue with that claim.

Whenever anyone asks what was my favorite part of the trip, I pick Stewart Island.

But first we had to get to Invercargill. We spent the next several days traveling the Southern Scenic Route to Invercargill and beyond with some diversions.

Much of the route lay along the seacoast. We passed wonderful rock formations, more fur seals, beaches, and whimsical summer homes or baches. The baches reminded me of my family's get-away when I was growing up -- an abandoned streetcar on stilts next to a Mississippi cut-off lake.

This elegant beach bird is a Pied Stilt.

Our first stop was Nugget Point where we had the option of walking out to a lighthouse.

The southern shoreline is stunning with blue water, empty white sand beaches, and plenty of wildlife.

Our luck with weather continued to hold -- sunny skies and very little wind. Many of the trees and shrubs in this area were sculpted by the more typical strong prevailing winds. 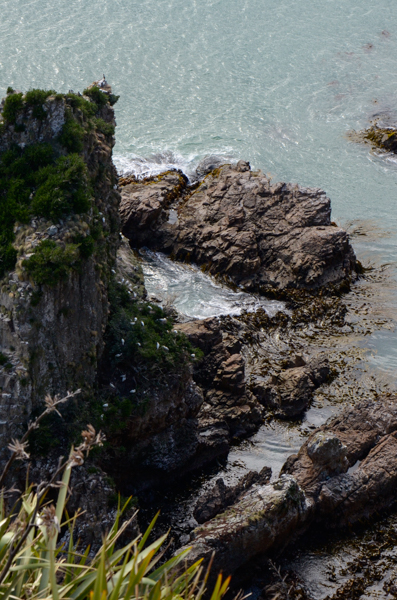 The large white birds halfway down the rock face are Royal Spoonbills. They have recently begun to establish breeding colonies in New Zealand.

I didn't even know they were in this picture, which I took simply for the drama, but others in our group saw some out on the point. When I was processing the images I noticed the birds and could enlarge the image enough to identify them.

The lighthouse, built in 1870 and automated in 1988, occupied a dramatic headland. 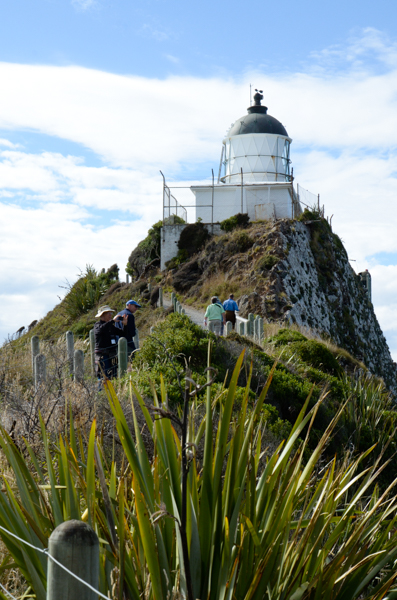 We saw a number of lighthouses that looked exactly like this one. I wonder if New Zealand got a volume discount from the manufacturer. 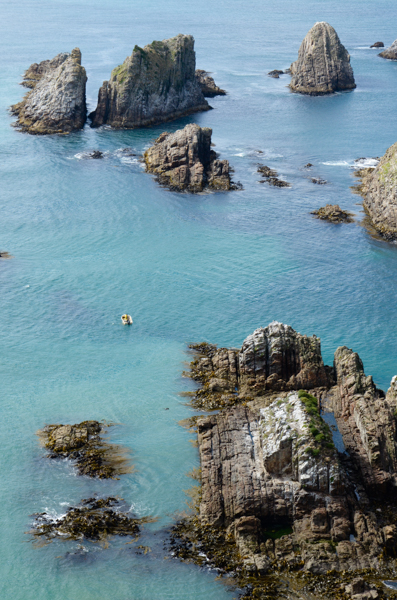 The islets at the end of Nugget Point are called ... wait for it ... The Nuggets. At the time the rocks were formed the strata show that they were 90° from their current orientation. Over the eons this entire area has been tilted on end.

I couldn't tell if the men in the small boat were fishing or just enjoying the view.

There are fur seals cavorting in the small pond on the largest island.

Our next stop was Purakaunui Falls. Chas apologized for the low rainfall, which had reduced the flow over the falls, but for me the best part of the excursion was the walk through the forest to get there. I don't have a recording of the wonderful bird calls we heard in the bush, but if you're interested you can hear some at the link above. (Follow the link for birdsongs.)

After the walk to the falls, we had a picnic lunch at the carpark. 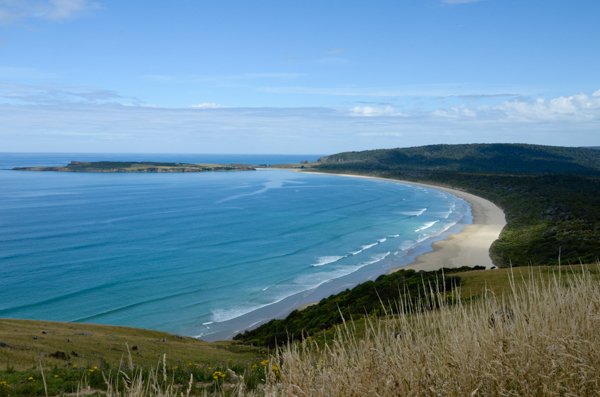 This is "yet another glorious vista." I began to joke about these mid-way through the trip. It seems like everywhere you look there is something lovely in this country.

If there were normal winds, the surf would be spectacular, but many of the beaches have strong rip tides, which make them dangerous for the unwary.

Nearby Lake Wilkie, formed in the last ice age. It was part of a much longer walk, but our time was limited. A lake such as this offers a rare habitat. 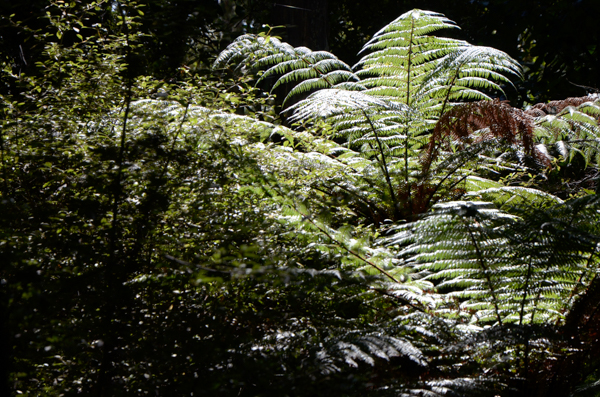 Nothing special about this tree fern. I just liked the picture. 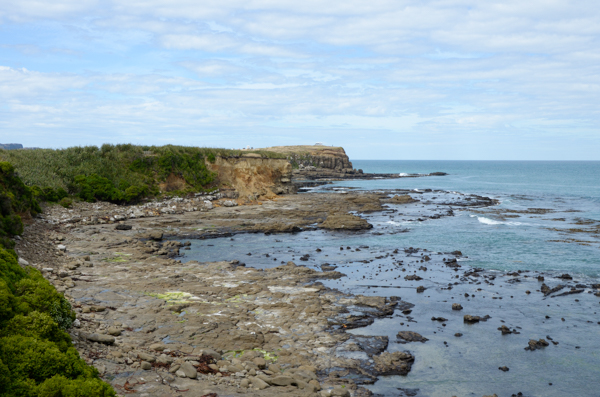 Curio Bay is the site of a fossil forest so ancient that it predates the separation of New Zealand from the Gondwana super-continent.

At the time we visited the tide was coming in, so much of it was under water.

The bay is home to endangered Yellow-Eye Penguins and much of the area is roped off.

There were many stumps and such, but this tree really grabbed me.

While in this area we also visited Porpoise Bay hoping to see the rare Hector's Dolphin. We didn't.

One of the great advantages, from my perspective, in having Chas as a guide was that he was a farmer. That enabled him to provide all sorts of information about farming practices in NZ that a more conventional "tour guide" could not have done.

This field is being prepared for winter forage. Since the weather has been so dry, some farmers have already started managing their stock as if it were already winter.

The leafy looking crop nearest the picture is brassica. On the far side of that is a row of plastic-wrapped hay bales called baleage.

A moveable electric fence will give the animals incremental access to the forage and the baled hay as needed.