The morning's expedition was to the Mt. Ruapehu ski area. There was snow still on the mountain but not much. February down under is equivalent to our August.

The Chateau Tongariro Hotel was built in 1929. The ski area soon followed. It became a fashionable international destination resort throughout the 1930s.

The ski area, with some residual snow on the peaks, is visible behind it. It is the Whakapapa Ski Field.

It took two lifts to get to the top. The double chair was quite a challenge without skis. The detachable quad up top was easier.

The mountain peaks of Ruapehu, Ngauruhoe and Tongariro are sacred to the Maori. In the mid-19th century the far-sighted chief of the local tribe could see that Europeans were taking much of the Maori land so in 1887 he gifted the mountain peaks to the people of New Zealand to ensure their protection. Since that time the government has added additional territory to the park.

In NZ the only slope-side housing is owned by ski clubs. There were a number of structures on the slopes, some more elaborate than others.

This particular "hut" had stunning views from both front and back.

Ruapehu is New Zealand's most active volcano. A recent violent eruption was in 1995. The volcanic activity doesn't allow much time to vegetation to develop, so the area is pretty barren. The volcano was heating up as recently as December, 2020, but has since simmered down. 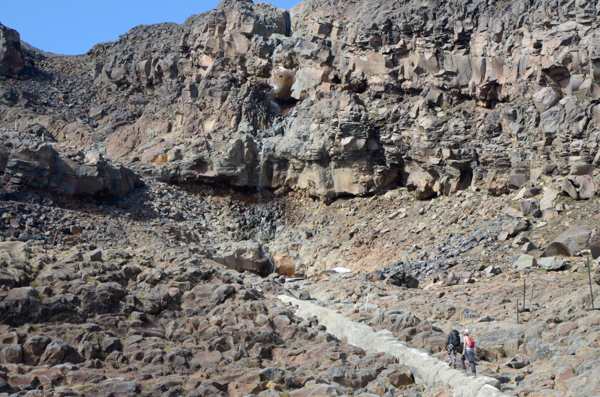 The "path" that these folks are climbing up is a water channel for the snow cannon. Yes, they make snow here. You would want quite a base before opening these slopes!

YouTube has numerous GoPro home videos of skiing here, so it can be done.

This general area was the site of much of the filming of Mordor for the Ring Trilogy. It is sufficiently desolate without CGI enhancements. 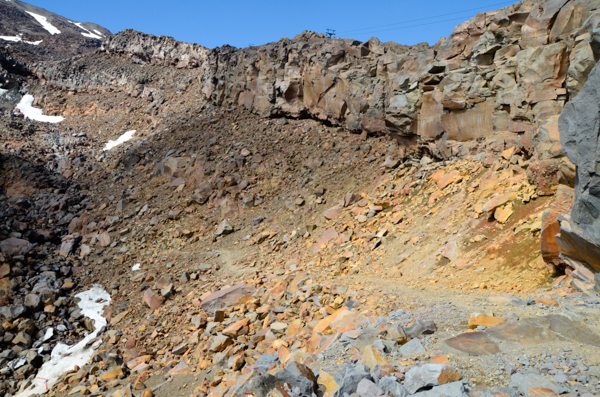 This ski bowl reminds me of the "Rock Garden" trail at Alpine Meadows without its snow cover. Jim & I attended a stockholders meeting one summer and hiked up. It looked a lot like this.

The ski area does not go all the way to the peak, which is still considered sacred to the Maori.

There are many hiking trails in the region including the Tongariro Alpine Crossing. Our leader Suzanne said that she had hiked that before. 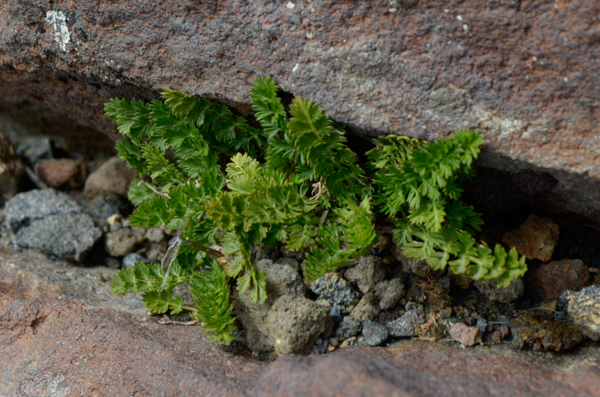 Although the rocks appear desolate, I'm always fascinated by plants that colonize the most extreme locations. I scrambled around and took pictures of several.

Couldn't locate what this might be. Call it Plant X. 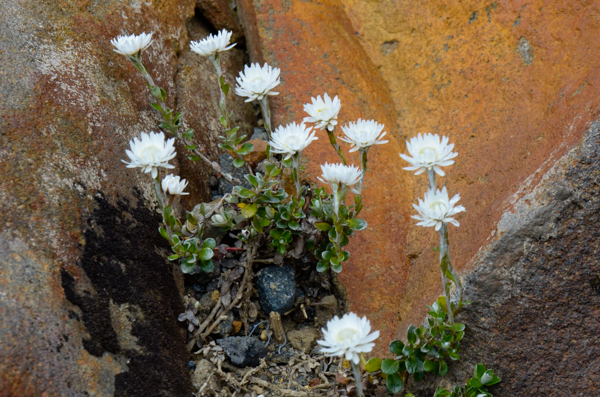 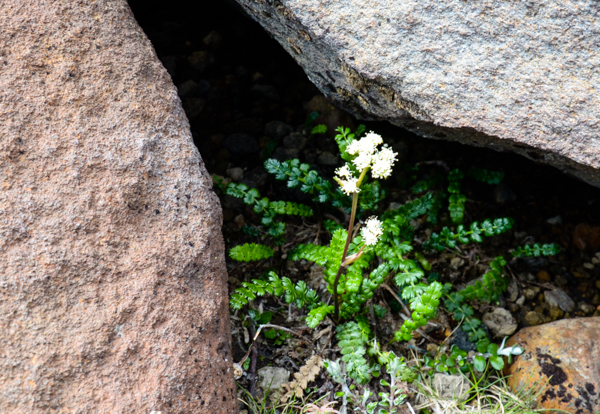 Couldn't locate this one either. Plant Y?

The greenery looks the same, so maybe this is Plant X in flower? Cool green flowers. 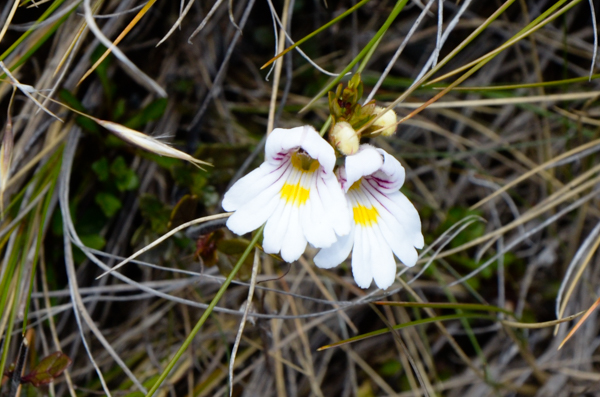 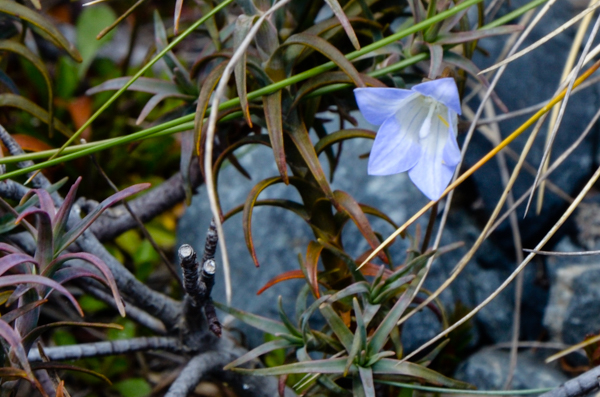 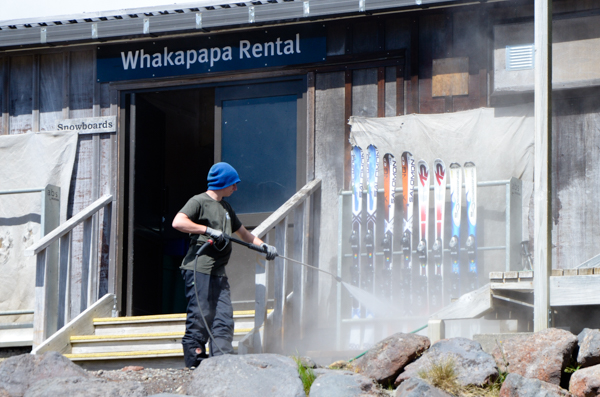 One way to maintain your rental skis: power wash them!

There are many "tracks" throughout NZ for hikers. Many require multi-day trips. This group of young women looked like they were planning an expedition. 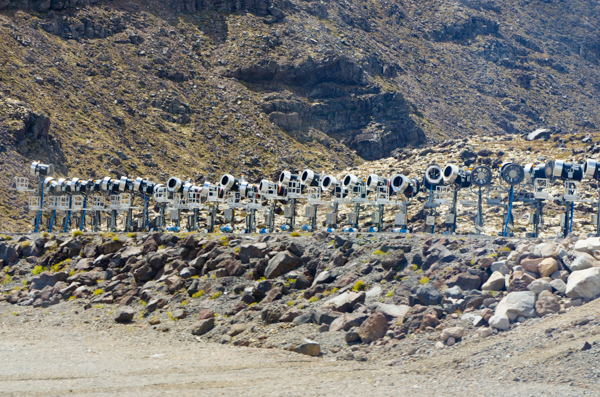 Snow-making equipment ready to be deployed. 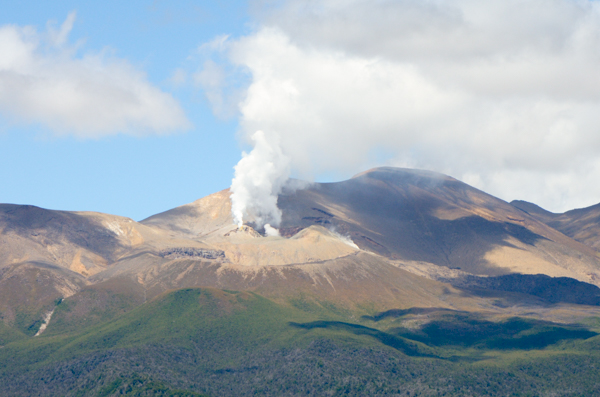 We passed this steaming mountain on the road between Turangi and Ruapehu. Our bus driver, Tony, said that he viewed the continuous venting as "insurance." As long as the pressure was being relieved in this way, the mountain wouldn't blow its top. Hope so! 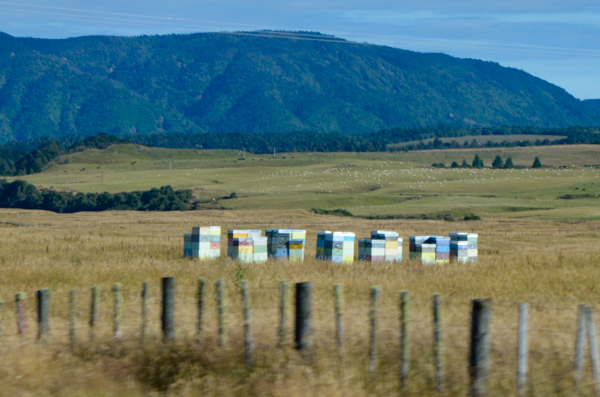 A common sight along the side of the road were beehives. There are no native NZ bees. Honeybees and bumblebees were imported to fertilize introduced crops. They have also adapted to some native plants such as the manuka or tea tree.

Some manuka honey has been shown to be an effective medical treatment for certain wounds although like many other natural products its benefits may be overstated.

I was fascinated that most of the beehives were brightly colored, not simple white like in the US.