After an al fresco lunch at Waimangu Valley, we were back in the bus toward out destination of Turangi, but there were sights to see on the way. 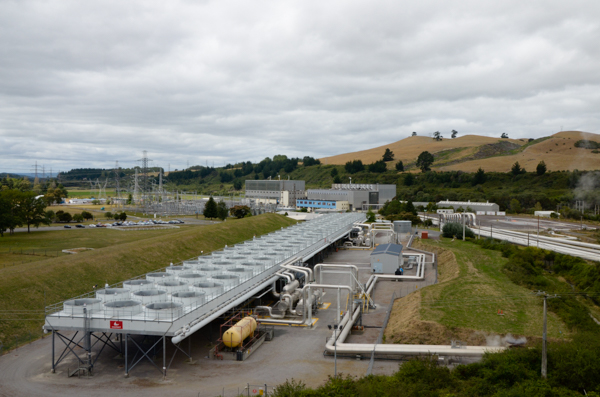 Our first stop was the Wairakei Geothermal Power Station. There are no tours of the plant itself, but we drove around this enormous facility. The station dates from 1958 and was the first "wet steam" plant in the world. It is now being phased out of operation as newer ones come online.

The power plant is in the background. The pools in the foreground are producing prawns! 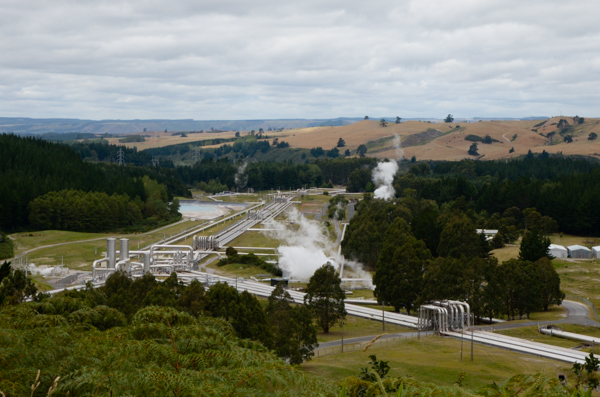 Geothermal energy is not as benign as you might think. Hazards include land subsidence and water & air pollution. In the case of this particular plant, steam extraction affected nearby geothermal features such as Geyser Valley. Click for more info about geothermal energy. 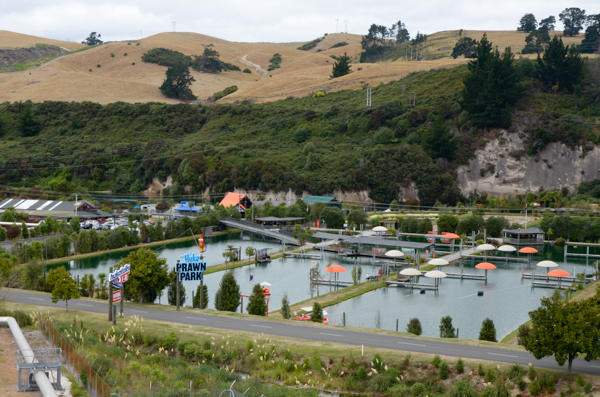 Waste heat from the power station is used to warm pools used to produce shrimp. An added feature is the Prawn Park amusement attraction.

Another brief stop gave us the chance to stretch our legs and visit the Huka Falls of the Waikato River.

The river narrows dramatically as it flows through a rock gorge. A jet boat concession can take you right up to the falls. The Maid of the Mist on steroids!

Jet boats were a common sight in NZ. They were developed by a Kiwi entrepeneur with the fast shallow rivers of NZ in mind. They don't have propellers to break on rocks or foul in weedy streams. 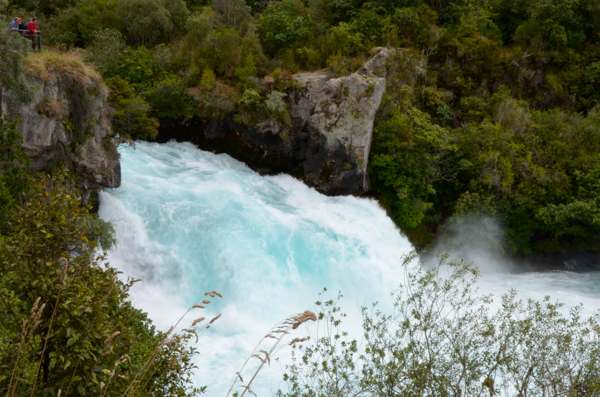 Not even a jet boat could ascend these falls.

The rivers and many lakes in NZ were an amazing color of blue. I never could get a satisfactory explanation in spite of asking almost everyone who talked about water. I heard several explanations -- all different.

My own best guess is that the lack of sediment or other pollution allows the water's natural color to come through. 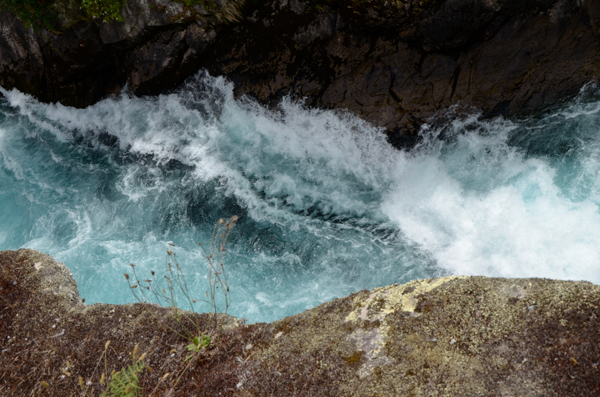 Another shot of the glorious blue water. It's worth mentioning that due to the extended drought, the flow over the falls is less than normal.

Lake Taupo is New Zealand's largest lake (by surface area). It fills the caldera from a supervolcano eruption about 26K years ago.

Its most recent major eruption was in the 2nd century AD with effects recorded in both China and Rome.

The mountain with the cloud cap is Mt. Ngauruhoe. Mt. Ruapehu, which we will be visiting the following day, is behind it. 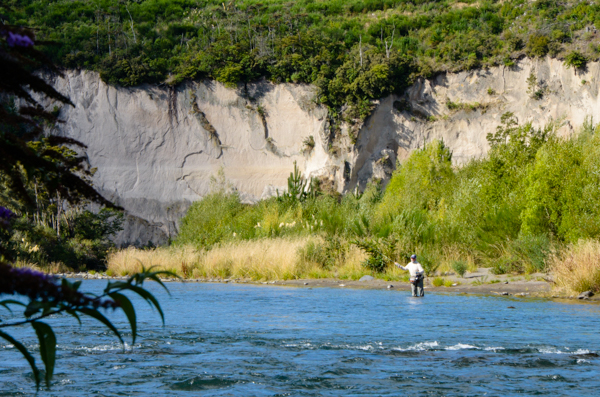 Our destination, Turangi, was on the opposite side of the lake from the picture above, which overlooked the town of Taupo.

Nowadays Turangi is noted primarily for trout fishing. A few of us walked along the Tongariro River to stretch our legs after the bus ride.

The town was originally built to house workers for a large underground hydro station upstream on the river. More on that below. 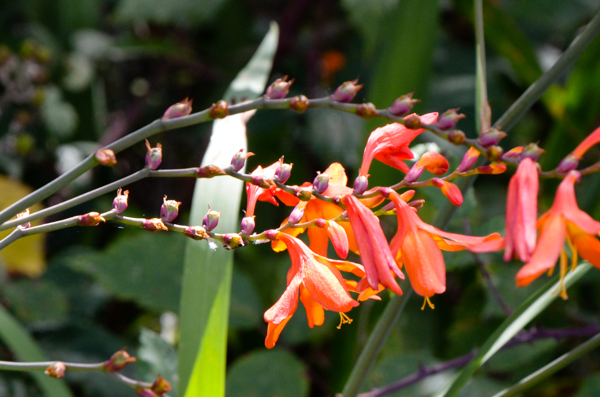 Crocosmia is a garden escapee that has blanketed NZ. Pretty flowers, but it displaces other plants that are of more use to the native wildlife. I pondered planting some back home in Virginia as a memento of our trip, but only if it is not invasive here as well.

This picture will have to do. 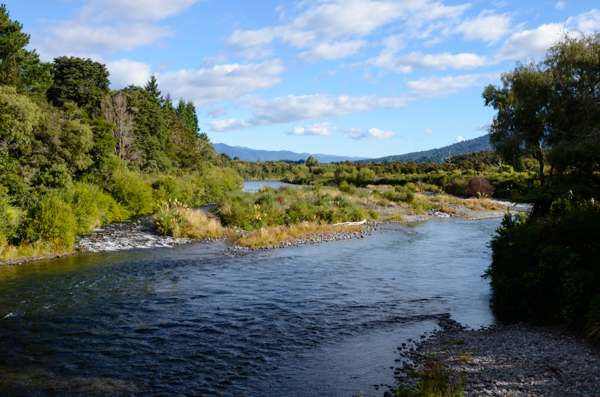 The river is one of the breeding grounds of the endangered blue duck. Numerous signs admonished people to keep their dogs on leash to prevent any damage to the rare ducks.

The only ducks we saw were the ubiquitous mallard hybrids, but we did see at least one unleashed dog cavorting in the river while its owner threw sticks. 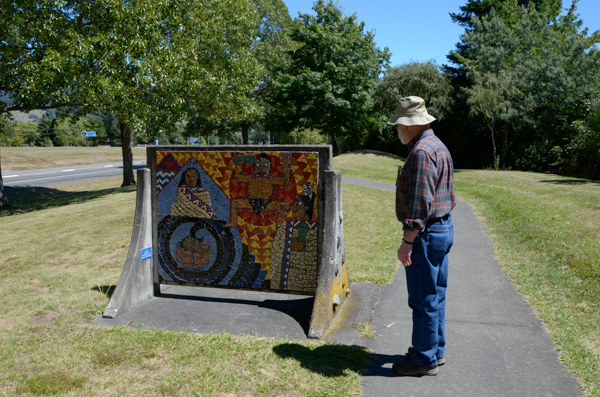 The next day after the trip to Mt Ruapehu most folks went to a fish hatchery, but Jim and I walked around town.

Turangi had been settled by the Maori many years ago. The path into the small town center was lined with several mosaics illustrating Maori history and myth.

See below for some details of the controversy over the power station and Maori rights. I hope my summary covers the main points, but there is all sorts of info available at the links for those who have the time and interest.

In 1840 the British and many of the Maori leaders signed a document called the Treaty of Waitangi, which laid out the rights and responsibilities of the indigenous Maori and the British crown. The Maori-language version of the treaty, which was read and signed by the Maori, was somewhat different than the original English-language version. Further confusion was introduced by differing interpretations of land ownership.

Maori and Pakeha relations had their ups & downs over the years and the treaty was sometimes honored, usually not. In the late 20th century, the Maori began to use political action to regain their rights under the treaty. In 1975 the Treaty of Waitangi Act gave some provisions of the treaty legal status within NZ and set up a Tribunal to review claims under the act.

When the power station was proposed for Turangi, the government "took" Maori land to build the workers' housing. As a result the local tribe brought a claim to the Tribunal and won. Specifics may be found at this Wikipedia link, which matches what we were told by our guides.

Millions of dollars have been transferred to various Maori tribes nationwide based on suits before the tribunal. Some tribes have invested the settlements wisely; others have not. Controversies continue and probably always will. I never got a clear answer as to what extent the wealth of the tribe translated, if at all, to improved living conditions, education, etc., for the individual tribe members. It probably varies from tribe to tribe.