After our hike through remnants of various eruptions, we cruised around the crater Lake Rotomahana. This lake had been the home of the pink & white terraces prior to the 1886 eruption of Tarawera, but after the eruption it became much larger. The lake is considered to be part of the caldera of a still-active volcano.

For those who wonder why we think such a "dangerous" place is interesting to visit, everywhere is more-or-less dangerous. While we were in NZ, New England was receiving record amounts of snow. Even our own Rockbridge County, VA, was experiencing abnormally low temperatures and unusual snowfalls. We were worried about our friends and animals back home while cruising the volcano. 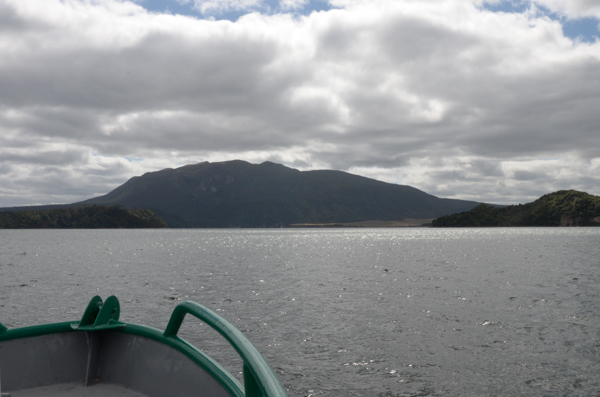 Mt. Tarawera is in the background. Closer to us on the right is Patiti Island. The lake is fed by hot springs and emits about 500 metric tons of CO2 daily. NZ has resolved to reduce its CO2 emissions, but such a large percentage of the total is due to natural causes, such as its many volcanoes, that it will be difficult to make any real impact.

This bluff shows some of the layers of volcanic deposition. The yellowish rock is ignimbrite, remnant of earlier volcanic activity. The grey rock above it was left from the 1886 eruption. The entire rock face is one side of the rift opened by that eruption.

I recommend a trip such as this to anyone who is tempted to think the world revolves around humankind and our activities. It is humbling. 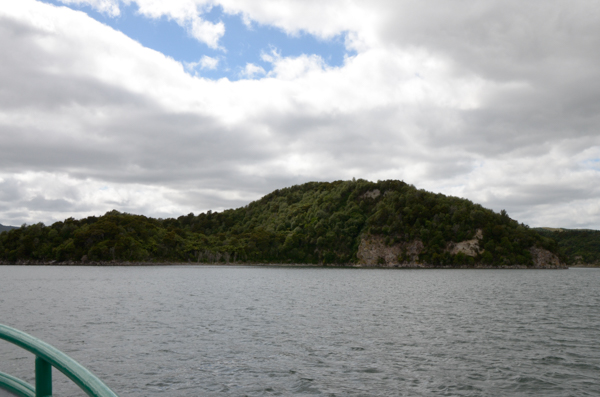 Patiti Island is a remnant of an older eruption than 1886. Prior to that time it was a small hill on the edge of the existing lake. It is now an island. There is work underway to clear the island of all introduced critters such as possums, rats, ferrets, weasels and stoats so that it can become a safe haven for native birds and endangered plants. Unfortunately predators can swim, so vigilance is needed to keep a place safe. 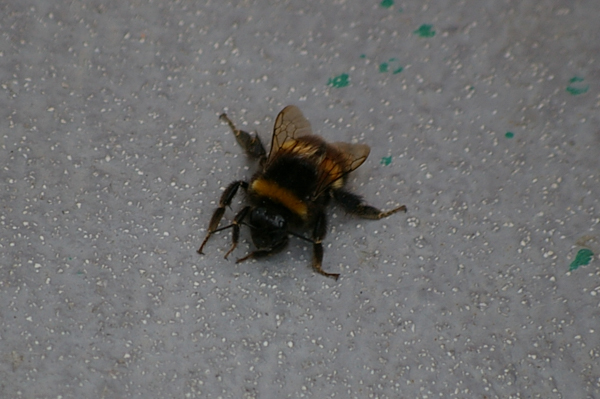 Speaking of predators, when I boarded the boat I noticed this bumblebee on the deck. Being friendly to bees, I was careful not to step on her and even warned others away.

The ungrateful witch thanked me by quietly crawling up inside my pants leg and stinging me on the knee. Twice! I dislodged the miscreant by squealing and stomping (I'm sure the squealing helped!) and she lived to sting another day. Another passenger shared his Benadryl with me to stop the immediate pain.

I developed a delayed reaction to the sting and had to visit a doctor a few days later to get it under control. Bad bee!

Dead trees along the shoreline are due to changing lake levels. In the recent past the lake had risen temporarily several feet and these lake-side trees were drowned. Now the lake has receded to its normal level and undergrowth is starting to reappear. 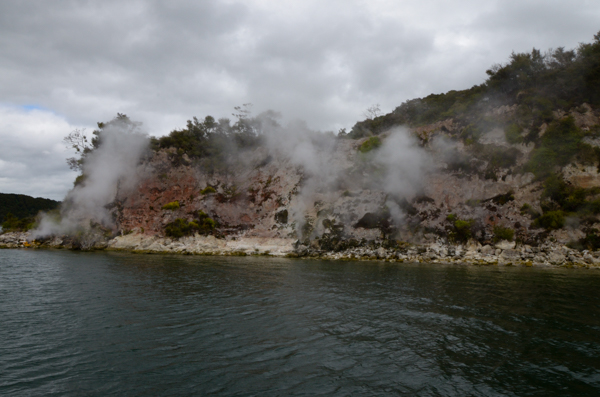 The "steaming cliffs" are remnants of the geothermal system that predated the 1886 eruption. 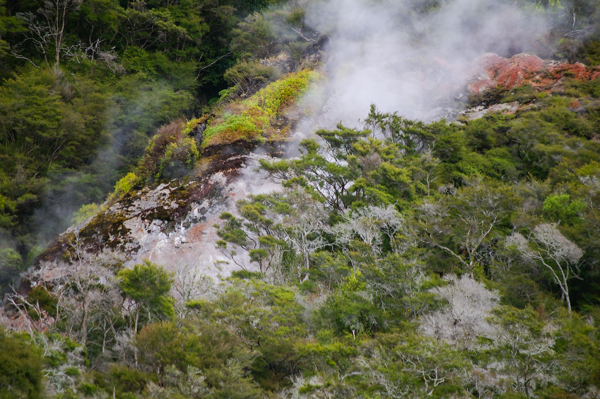 Heavily eroded areas that are inaccessible to humans have allowed introduced predators and browsers (wallabies, deer, and possums) protection from eradication programs. As a result the native flora and fauna suffer as can be seen from the dead trees and lack of undergrowth. 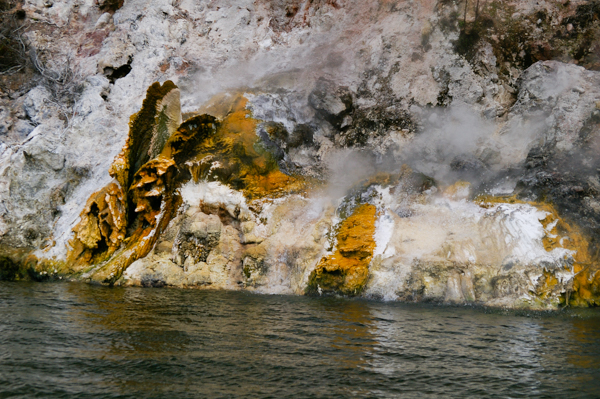 The yellow color at the steam vents along the cliff face is due to algae rather than sulfur. This is a tiny geyser erupting. 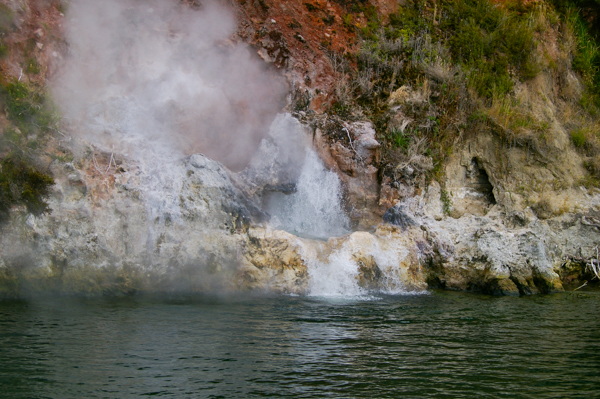 The boat hung around another mini geyser to watch its eruption cycle. A small pool fills and overflows shortly before the geyser burbles up. Its eruption blows the excess water out of the pool and then subsides. 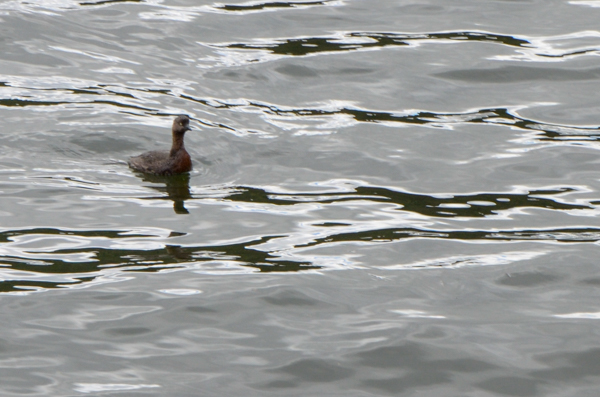 The lake is a sanctuary so it has many birds. This NZ Dabchick seemed abundant as were black swans. Its overall population, however, is declining due to introduced predators and habitat loss.

After getting dust on my camera sensor when changing lenses on an earlier trip, I decided not to take my Nikon telephoto lens, but to take my old Pentax camera and its telephoto. That worked pretty well even though it meant that I had to carry two cameras some of the time. Here it enabled me to get better pictures of the birds although I still find it hard to get clear focus of a bird on the water or in the air.

I believe that this is a black-billed gull. There is no place in New Zealand that is so far from the shore that gulls are not seen. Usually we saw red-billed gulls and I have several good pictures of them.

I was tickled pink to get an in-focus picture of a bird in flight, regardless of what it is!

Best I can tell these are grey teal. I kept hoping to find some non-hybrid grey ducks, but everything I saw had orange legs betraying mallard ancestry.

These birds didn't have orange legs, but they don't have the strongly marked face of a grey duck. 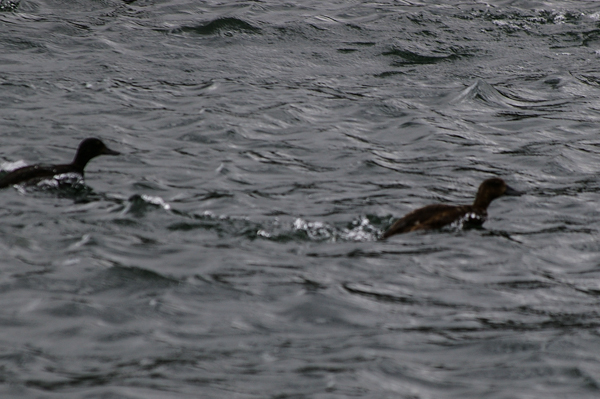 I was also hoping to find blue ducks or whio, but never did. Jim said that the guide on his cruise (he took the cruise first and passed on the hike) affirmed that they were present. These were the closest that I saw, but they don't have the distinctive yellow eye. They might be juveniles, but the blue duck's preferred habitat is fast-flowing rivers, not lakes.

Don't know what these birds might be. Another possibility is brown teal, but there is no eye-ring. 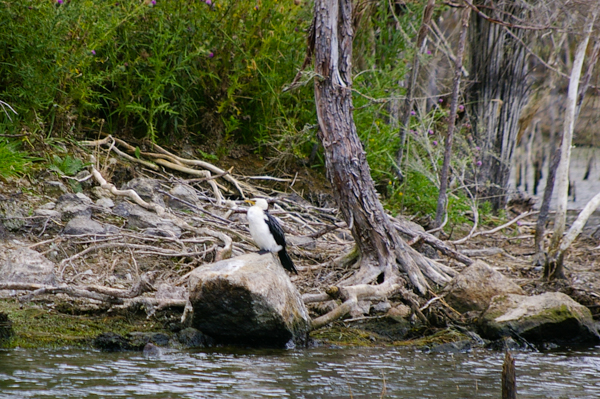 This is a little shag. It comes in many color combinations. The yellow bill and size distinguish it from the pied shag, which also appears to favor salt water.