We said goodbye to Rotarua and headed south to our next destination in Turangi. On the way we stopped at Waimangu Volcanic Valley, scene of a major eruption in the 1886, a devastating geyser in 1900, and another smaller eruption in 1917. We divided into two smaller groups for the tour: one hiked down the valley first and then cruised on the crater lake. The other did the two segments in the opposite sequence. 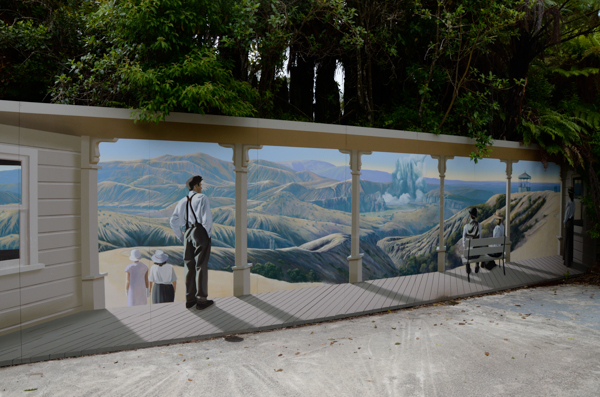 The hike started at this mural depicting the early stages of the 1886 eruption. The area was already a tourist attraction on account of the pink and white terraces -- acclaimed as the "Eighth Wonder of the World" in their day. They were destroyed (or at least flooded) as a result of the eruption. 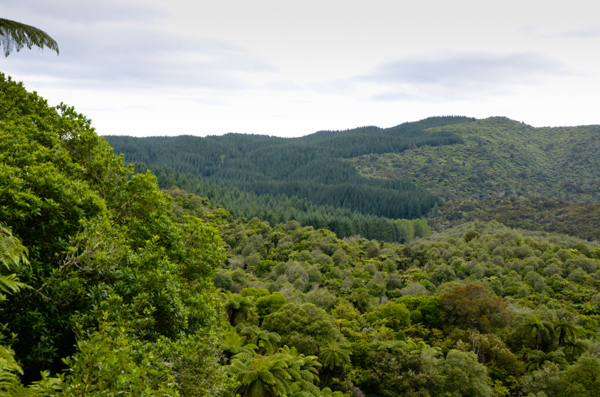 Nearby was an overlook into the park. After the eruption this area was blasted clear and coated with ash. There were no plants, animals or people remaining. There is a dark green planting of Pinus radiata beyond the borders of the park, but everything else has reestablished itself naturally since 1886, so this is a young forest. 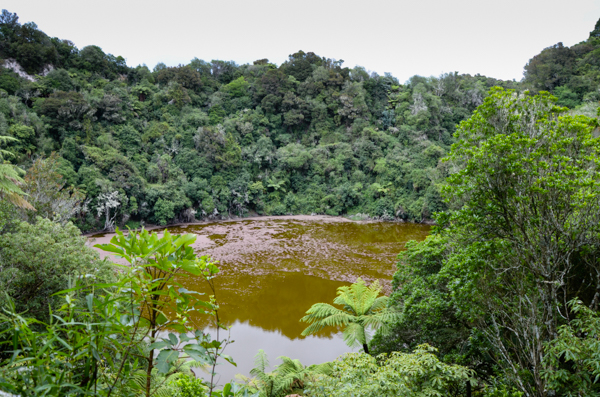 This small pond is the southern-most crater resulting from the 1886 eruption. The full length of the rift created by the eruption in one day is eleven miles! Mount Tarawera itself was split in two. An image from Google Earth shows the impressive rift in the mountain. Scrolling to the lower left shows the rift extending into the lake and park.

The green color of this lake comes from algae and sphagnum moss. It is shallow and cold. 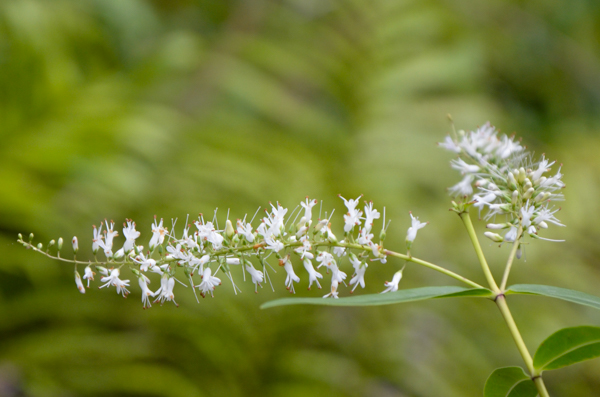 Without getting into a taxonomic twizzle, this flowering shrub was one of the most common in the native forests. It is either a hebe or a veronica. There has been recent debate over the proper classification. The flowers range in color from almost white to lilac. This particular one was overlooking the crater above. 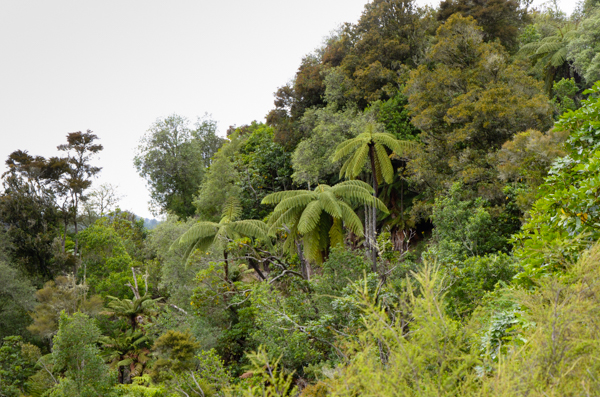 This is what a young native forest looks like. The tree ferns, of which there are several types, are prominent features.

Native forests are subject to defoliation by Australian bush-tailed possums (not related to the American opossum). These were introduced to NZ for the fur trade, but the population exploded since they have no predators. Their presence significantly affects the plants that can survive in possum-infested areas such as this one. 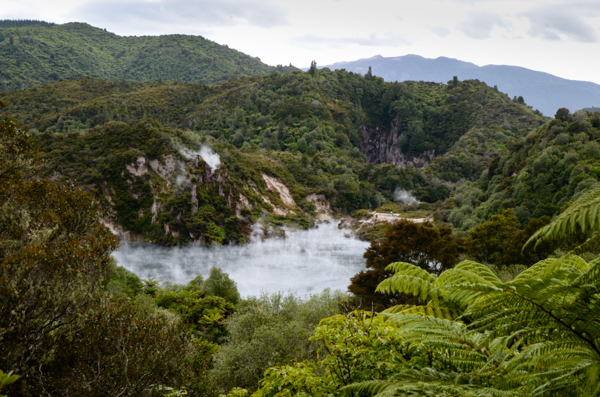 The next in our line of craters is Echo Crater, which contains Frying Pan Lake. This was the center of the 1917 eruption that killed two people. At present, the lake is the world's largest hot spring with a temperature of 131° F. Its most recent small eruption was in 1974. 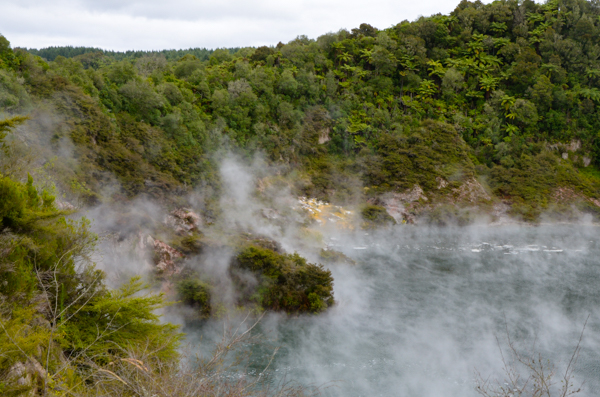 The lake is eerie. The acidic water releases gases that bubble to the surface making it appear to boil. 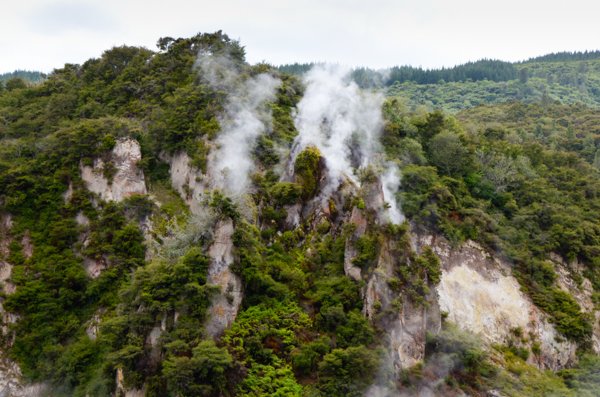 This rock formation overlooking the lake is called Cathedral Rocks. It is formed of rhyolitic lava that predates the Tarawera volcano. 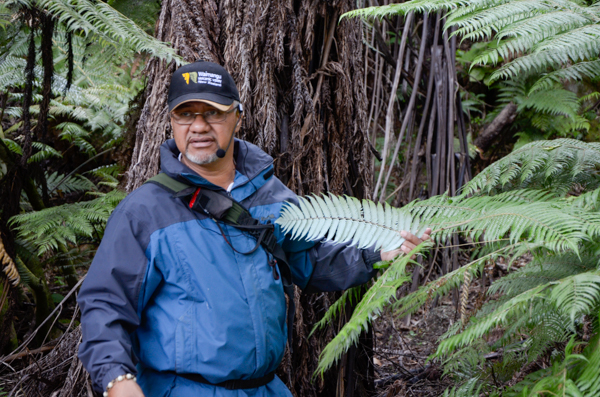 Our guide for the walk called himself Aotaroa, like New Zealand itself, but he isn't Maori -- he is a Pacific Islander. Nevertheless he was extremely informative. Here he is showing us a silver fern, an iconic symbol of NZ.

The fern doesn't stand out until you look at the silvery underside of the frond.

The koru, or unfurling frond, has also been used as a logo of many NZ organizations, such as Air New Zealand. 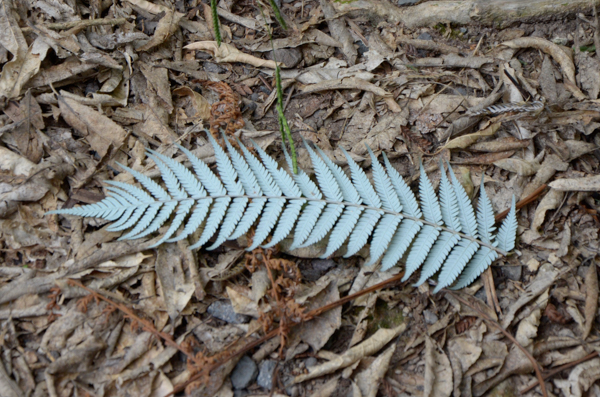 The Maori used the ferns as trail markers. We were told that they shine in the moonlight so are particularly effective markers at night. I confess I didn't make a nighttime experiment.

Frying Pan Lake feeds Hot Water Creek. This valley was the location of the Waimangu Geyser, which erupted regularly between 1900 and 1904. Eruptions could reach over 1300 feet high and included sand, mud and rocks as well as boiling water. There are pictures at the link. 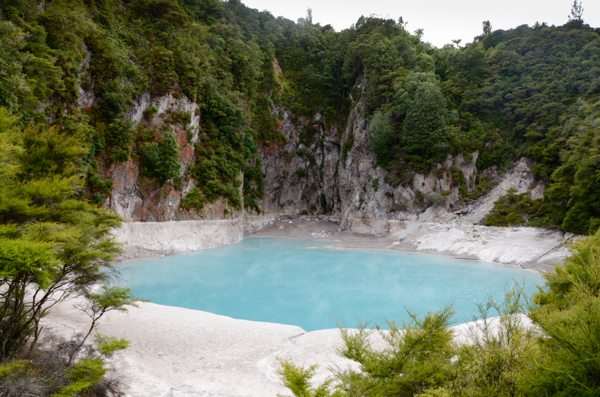 Inferno Crater Lake is actually the world's largest geyser, but the geyser is under water. The surface of the lake rises and falls depending on the activity of the geyser. The maximum height of the lake is indicated by the white deposits. When it gets that high, the water, which is extremely acidic, overflows into a waterfall.

The color of the lake changes depending on where it is in the eruption cycle. The blue that we saw was breathtaking.

We saw tracks beside the lake and our guide said that they were from wallabies, another introduced animal from Australia. 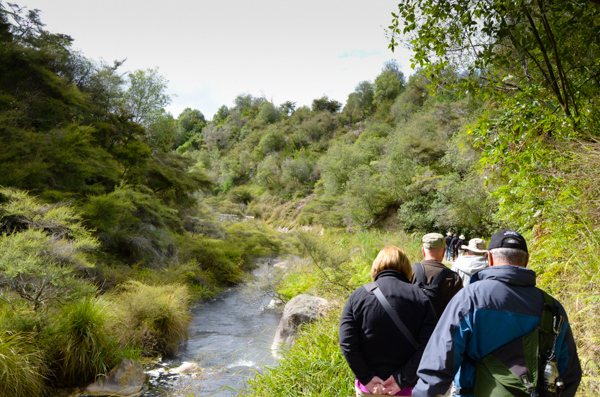 We are coming to the end of our walk. Just around the bend there was a bus waiting to take us to the lake cruise.

One of the benefits of traveling with an established organization like Road Scholar is, ironically, that you are not locked into the schedules and itineraries that "independent" travelers must follow. Yes, there are schedules, but for the most part they are set up for your convenience. 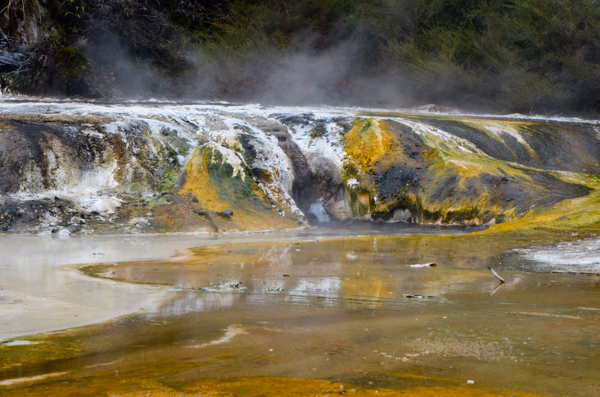 The Warbrick Terrace derives its colors from algae. This formation is similar to the earlier Pink & White Terraces that were destroyed in the 1886 eruption, but much younger and smaller.