The afternoon and evening of our last day in Rotorua were spent at Te Puia, the home of the Maori Arts & Crafts Institute and the Whakarewarewa Geothermal Valley. We received a tour of the facility in the afternoon. In the evening we returned for a Maori cultural presentation and a dinner that was cooked in the traditional underground hangi style. There is lots of information about the Maori and the programs at the Te Puia web site. 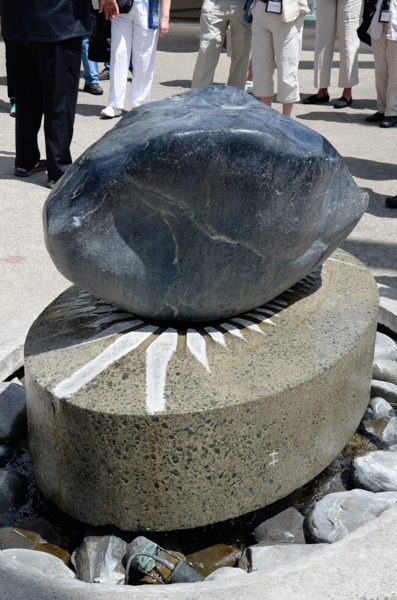 There are fountains at the entrances of most Maori cultural sites we visited. I particularly liked this one. I once asked why and received an answer, but I cannot remember the details. It has something to do with passing a threshold between the sacred ("tapu") and profane.

As it happens we have recently installed a similar fountain in part of our garden here at home. 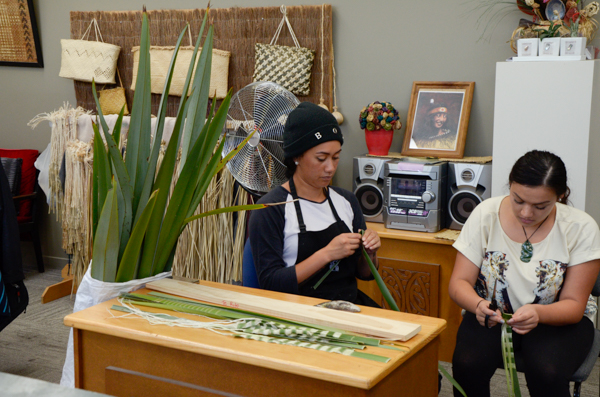 The Crafts Institute programs include processing flax to make various forms of traditional fabric. It is a several step process and, according to our tour guide, results in some pretty uncomfortable clothing!

There were two ladies making feathered cloaks. Neither of them was young, but they both asserted that they were mere beginners. The results looked pretty professional to me. 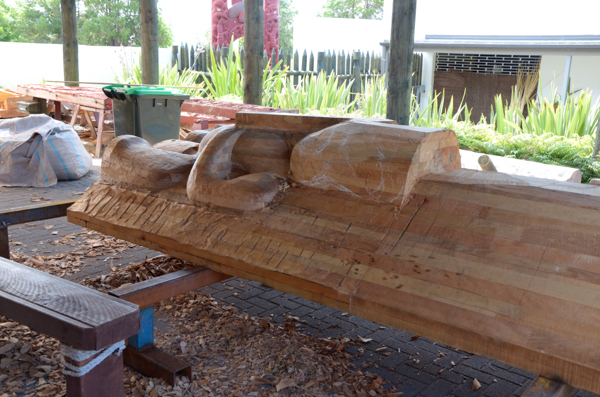 Carvers were working on decorative panels for a planned international exhibit. I've forgotten where it was going to be, but it was not in New Zealand. At one time such a panel would be made from a single tree trunk, but the large trees were logged out by Europeans. Now the panels are made of laminated wood.

I bought a coaster in the gift shop made of small pieces of a variety of the native NZ woods. They have wonderfully varied grains. Most of the remaining native forests are now protected. 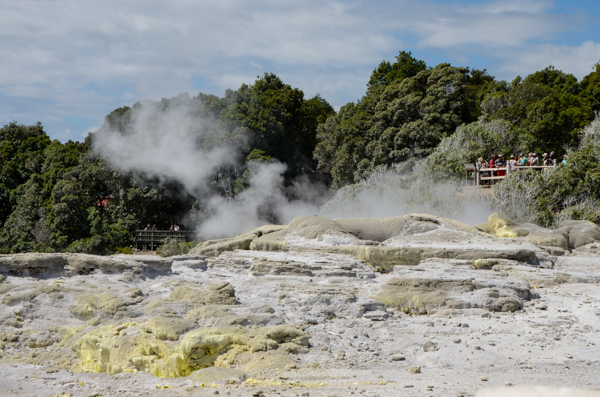 After visiting the Crafts Institute, we toured the Whakarewarewa Geothermal Valley, which contains a variety of geysers and boiling mudpots.

The Pohutu Geyser has deposited colorful sinter terraces. We will be visiting an area the next day that once had enormous terraces destroyed in a 19th century volcanic eruption. 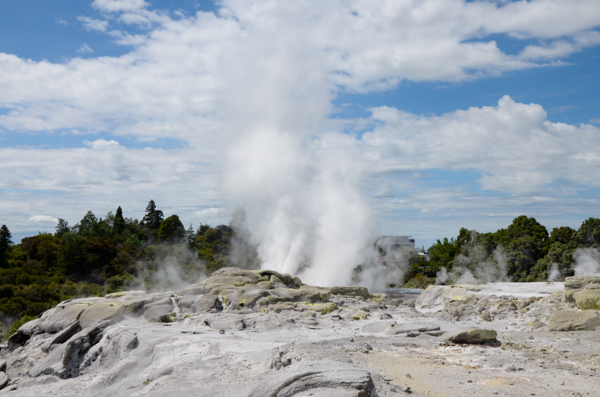 The geyser erupting. At one time it was endangered due to numerous ground-water wells in the area. The wells lowered the water table and removed the "fuel" for the geyser. When nearby water extraction was limited, the geyser resumed.

A view of the geyser's location from across the valley showing the extent of the terraces.

Later that evening we returned to Te Puia for a Maori cultural exhibition. It began with a Powhiri or welcoming ritual. 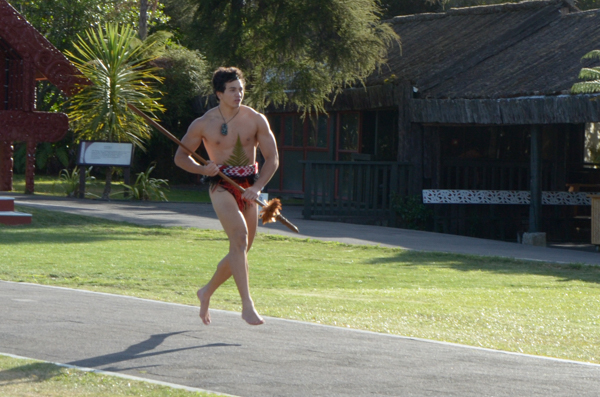 A young (and very handsome) Maori warrior ran out to challenge the visitors' designated representative. He carried a fern frond to be offered in a gesture to determine intent: did we come as friend or foe?

By accepting the frond our representative signified that we came in peace. I'm sure he was thrilled not to engage in single combat with the warrior! Had he actually been Maori, he would have chanted his homeland, status and descent in response.

We saw similar welcoming rituals at the Auckland airport by folks greeting their returning friends. 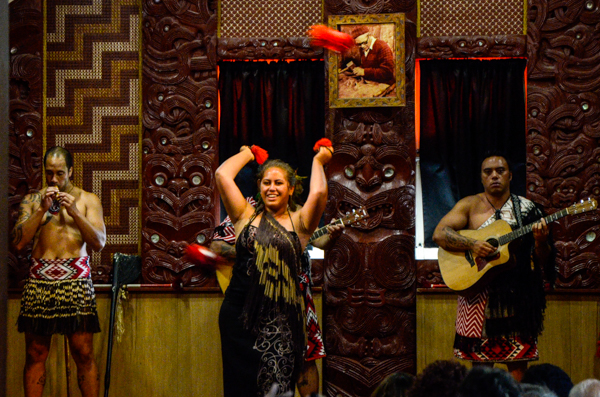 After welcoming us into the wharenui, or meeting house, our hosts treated us to several types of song and dance. The women danced with balls swung on strings, similar to the South American bola. They are called Poi.

Audience members participated in a poi lesson. Two of our number, Cheryl and Donna were brave enough to volunteer. The ladies did well for a first time! 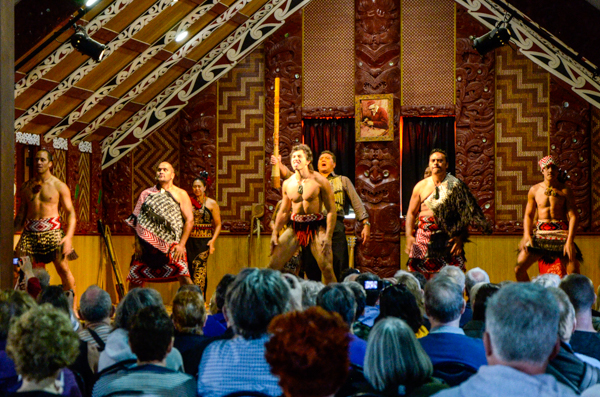 The men then performed a welcoming haka. Although portrayed as a war dance, there are various kinds for various occasions. 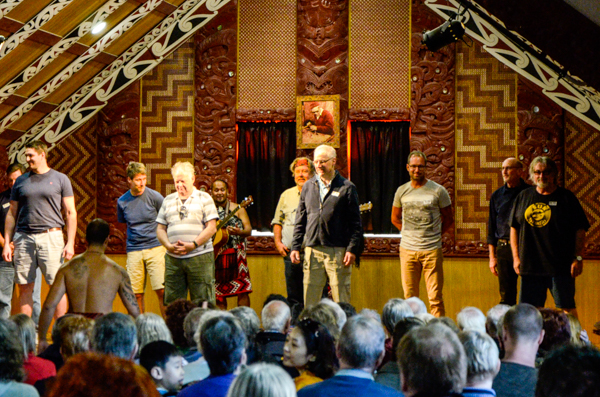 As with the women, men from the audience volunteered for their haka. Three of our guys came through: David, Pierce & Carl. Unfortunately David & Carl were on the back row and for all my "action shots" they were blocked. This was the only picture where they could all be seen.

After the singing and dancing, we were divided into groups for a delicious feast that included roasted lamb, chicken, fish, pork, root vegetables, corn-on-the-cob, and I forget what else. Yummy!

It was an evening to remember and taught us a lot about the Maori culture.