After the Forestry Institute, we arrived at Rotorua city. It has been a tourist destination for many years on account of thermal activity. 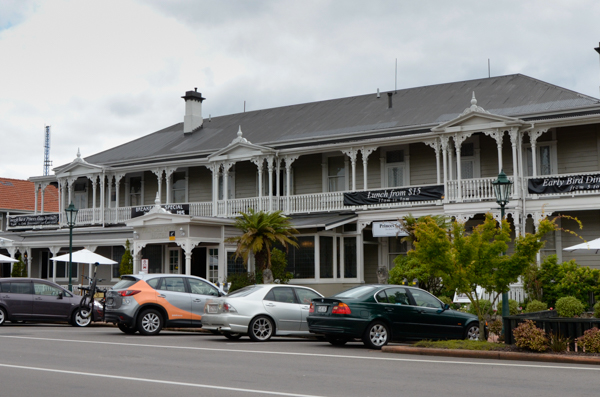 We had lunch in this restored hotel that started life many miles away in a mid-19th century gold-rush boomtown. When the gold ran out, an entrepreneur disassembled the entire hotel and moved it to Rotorua, which was already becoming a tourist destination by the late 19th century.

As noted earlier we saw a number of "used house lots" in the Auckland area and were glad to know that NZ had such an established recycling culture. 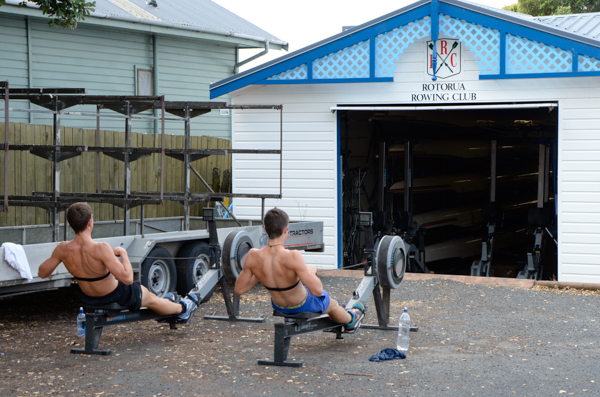 After lunch we walked to the lakeside Maori village of Ohinemutu. On the way we passed these young members of the Rotorua Rowing Club practicing on the rowing machines. One of our number commented that she thought they improved the scenery immensely.

The picture doesn't capture the hip-hop music that was helping them keep time with their "stroke." 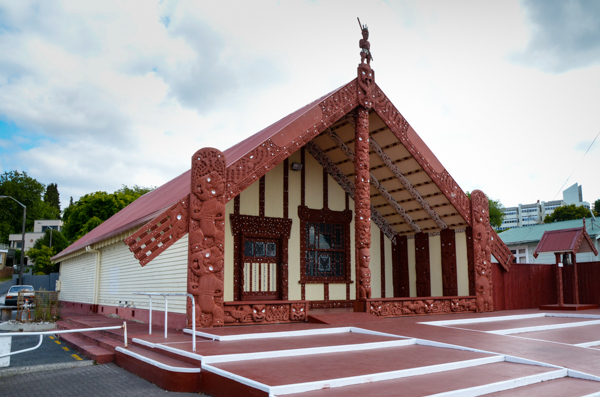 This is the marae or meeting house of the Ohinemutu village. Each feature of the marae is symbolic of the ancestor to which it is dedicated. Check the link for details. The red color, which is typical, was once produced with red ochre, but nowadays paint is used.

Large maraes such as this were only developed after the arrival of the Pakeha. Prior to that time they were smaller and less elaborate. There is some disagreement whether the ochre was traditional or an innovation. 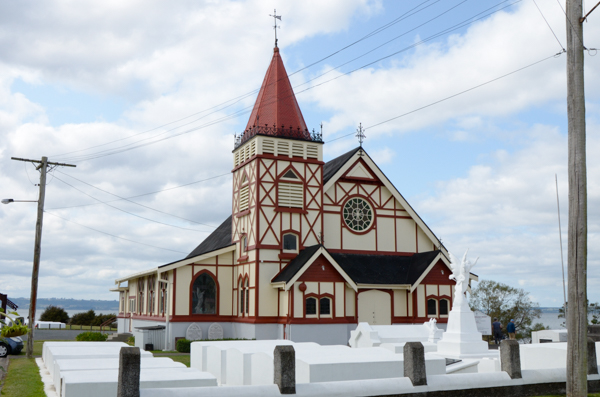 The Maoris embraced Christianity quite early. As mentioned above, having a mission station was considered prestigious, so the early converts may not have been completely sincere. Nevertheless they gave up cannibalism.

We were disappointed that this church, St. Faith, was not open when we visited. The interior is supposed to be lovely with a wonderful stained glass window overlooking the lake.

The extensive burial ground dated to the 19th century. 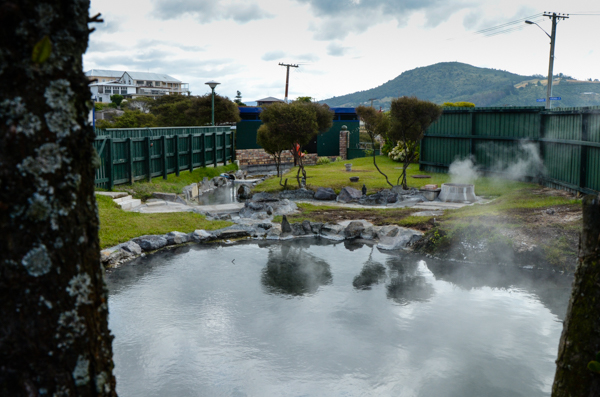 The village also contained this garden with thermal springs as well as other thermal features. The "chimney" to the right was burbling merrily during our visit.

In one part of the plaza, steaming water was bubbling up through the paving stones. 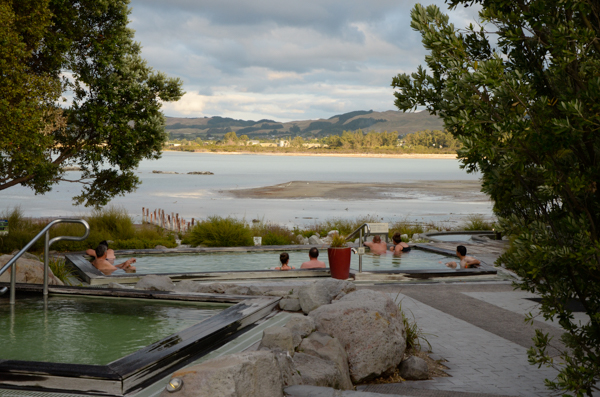 That evening many of us decided to get up close and personal with the hot springs at the Polynesian Spa. There were a series of pools at varying temperatures fed by two different springs: the alkaline Rachel Spring and the acidic Priest Spring. The views over the lake were spectacular. 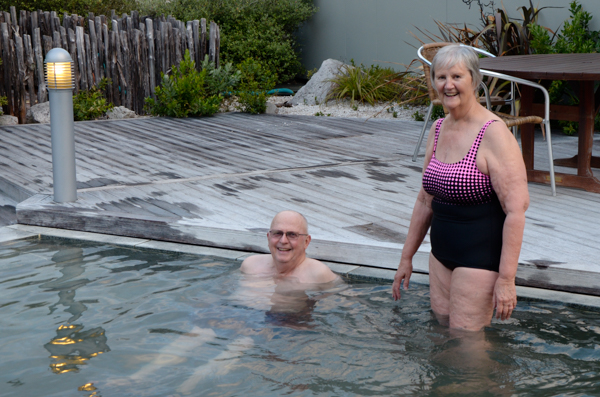 Al and Mary started in the moderately warm pool and found it very satisfactory. 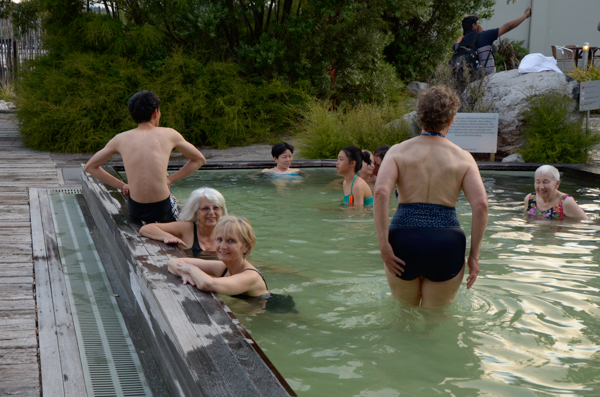 The medium-hot spring was a hit with the ladies: Zohreh, Jane, Karin (back to camera), and Linda. Plus myself who spent most of my time here. 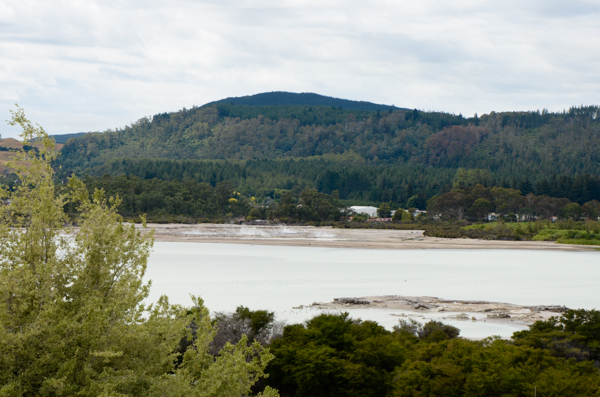 The view from the spa included these steaming mud flats. The low hills are the edge of the ancient caldera. 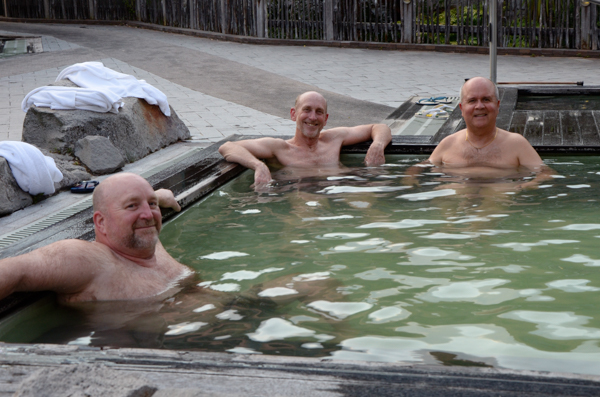 The hottest spring immediately attracted Ed, Carl & Bill for a relaxing soak. Others worked their way into it.

The other Mary tried the "reflexology walk" featuring large stones embedded in the underwater pavement "designed" to encourage "vital energy and blood flow throughout your body," relieve stress, improve balance and enhance physical and mental well-being. She and others were able to finish. I tried and my response was: oh, ow, OH, OW!

I had to miss out on all that enhanced well-being in order to save my feet. The narrow ledge made a great escape route! 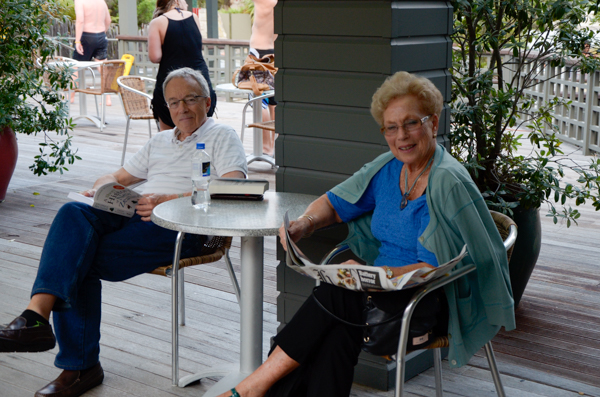 Gary and Fearless Leader Suzanne passed on the pools, but kept watch over our belongings.