Throughout our visit we were given explanations of how trees have been and continue to be an important "crop" in New Zealand. When the Maori first arrived in the 14th century or thereabouts, most of NZ consisted of thick bush. These forests contained unique indigenous trees and supported the native wildlife -- primarily birds. The Maori cleared the forest to facilitate their search for moa, their primary protein source, and to develop land for agriculture.

When the Europeans arrived in the 18th century, they stepped up forest clearing both to produce agricultural land and to supply building materials for their housing and ships. At present only a small fraction of the native forest remains. Most of it is second growth although some old individual trees survived because they were unsuitable for milling.

The native trees produced wonderful lumber for various purposes: canoe construction, structural uses, carving, decorative finishes, etc. It is mostly all gone. We passed a few "used house" lots containing older buildings that had been removed from their original locations and are now available for sale. Such houses are sometimes bought simply for the lumber they contain. Native forests can no longer be harvested.

Europeans also brought with them seeds of familiar trees from their homeland, some of which adapted too well and became weeds. Others grew rapidly in the favorable NZ climate, but because of that fast growth turned out to be unusable for their intended purposes. Their wood was too weak.

In the 20th century, New Zealand began researching appropriate crop trees. Native trees were too slow-growing to be economic in Western terms. As mentioned above, some trees were too fast-growing to have commercial use. The research identified three species as potential commodities: Monterey Pine (Pinus radiata) in the northern parts of the country and Monterey Cypress (Cupressus macrocarpa) & Douglas Fir (Pseudotsuga) in the cooler southern climates. Of these, the pine was the most successful. It can be planted densely on steep slopes unsuited for cattle or other vegetable crops and grows to marketable size in around 30 years. The cypress takes 40 years and the fir takes 50 years to harvest. Ironically Monterey Pine is endangered in its native range because of an infection spread by a beetle.

Some Maori tribes have been replanting native species with the intent of producing a crop in a much longer time-frame. 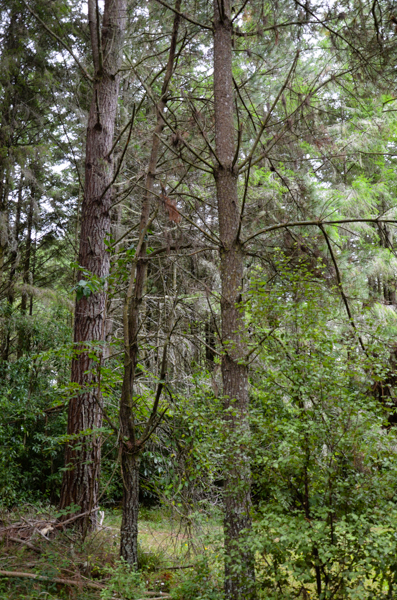 After identifying radiata as a tree of choice, the Forestry Institute began research into improving the crop. Initially this was done by natural selection.

Plantings were made of a number of trees and those that had desirable characteristics were selected for propagation. For example, the tree on the right shows a growth habit of regularly spaced branches with a significant gap between them. The tree on the left, however, has an irregular branching pattern and the branches are closer together. It would not be used in a breeding program.

In spite of its relatively rapid growth, 30 years to maturity versus 100+ years in its native habitat of central California, radiata produces strong timber that is suitable for many uses.

Experiments in direct genetic manipulation are also ongoing at the Institute, although they have been subject to protest and some vandalism. 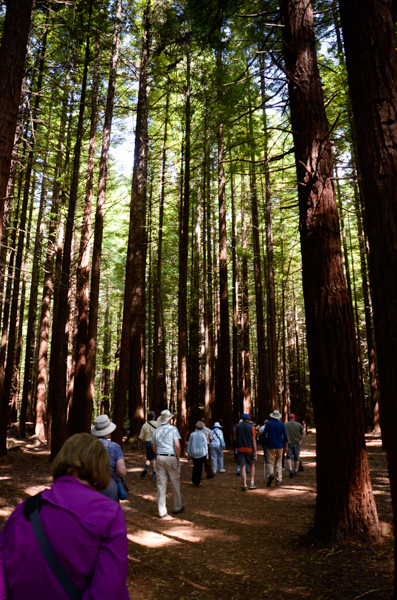 Another California tree didn't turn out a success.

Coast Redwoods grow well, and they are self-pruning with lower branches dying and falling off naturally. Unfortunately their wood, which is very dense and strong in its native habitat, is light and brittle when grown in NZ.

This grove at the Institute would have been sacrificed, but it has become so popular as a park, that it is allowed to remain. 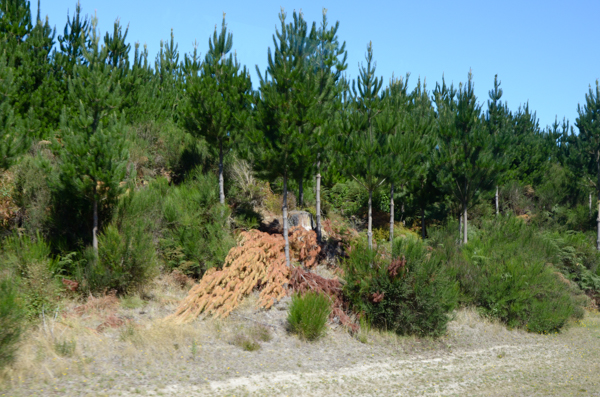 Most of my tree farming pictures were taken from the bus, so their quality varies.

These young radiata had recently received their first pruning. The farmer removes the lower branches to prevent knots from forming in the wood as it grows around existing branches.

The trees receive three such prunings: at 6 feet, 12 feet and 36 feet. The branches are allowed to remain alongside and decompose, which returns some of the nutrients to the soil. I don't recall a discussion of this practice as a potential fire hazard. 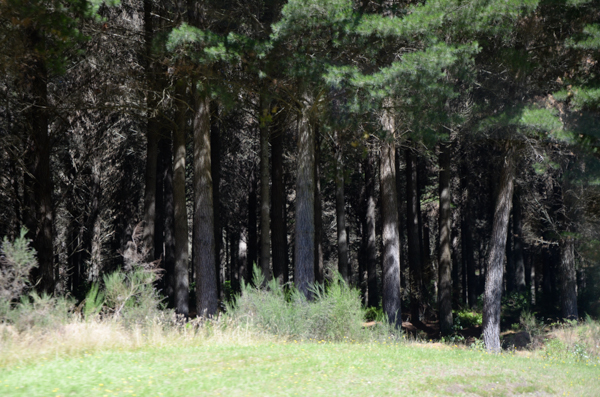 As the trees grow and are pruned, they eventually have 18 feet or more of knot-free trunk. This allows for easier milling and higher quality lumber.

Some stands are also thinned. Weaker trees are felled and allowed to remain and decompose. 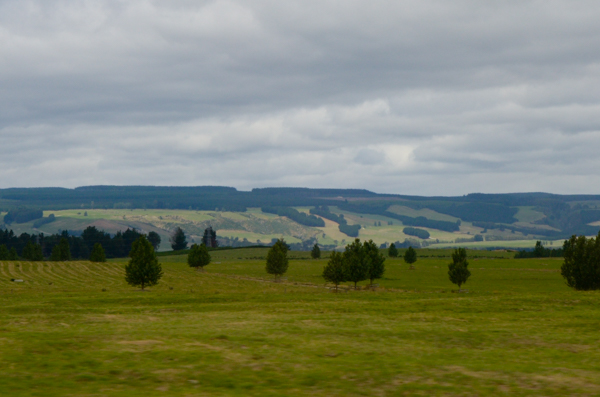 The crest of the far hill shows substantial acreage planted in trees. Some of the lower slopes have already been harvested.

The tree farms are subject to all the problems of monoculture: vulnerability to disease and pests, and limited ecosystems that don't support a variety of wildlife – especially NZ native wildlife. The Forestry Institute is working to prevent or address vulnerability issues. Nothing much can be done about the lack of biodiversity. 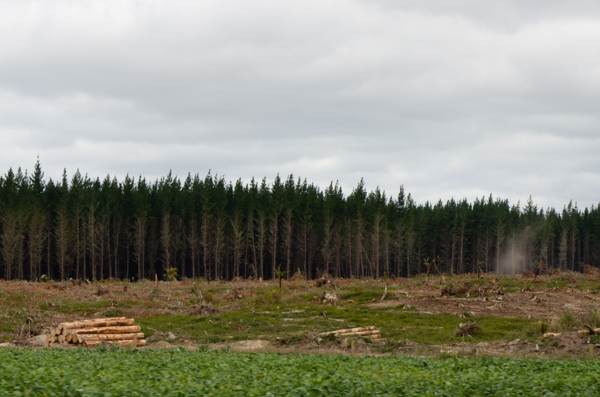 This mature stand is being harvested. The groves are clear-cut in the same manner that a wheat field is clear-cut.

If the land is to be replanted in trees, the stumps and slash remain to minimize erosion. 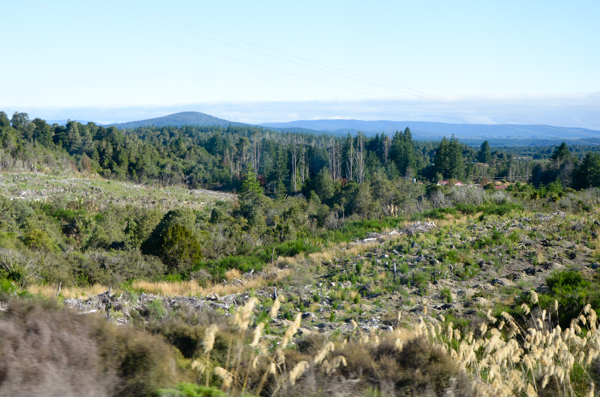 This field has been replanted in trees -- see the mounds along the right side of the bare area. Brush, stumps and slash from the previous harvest still remain to protect the soil and the young trees. 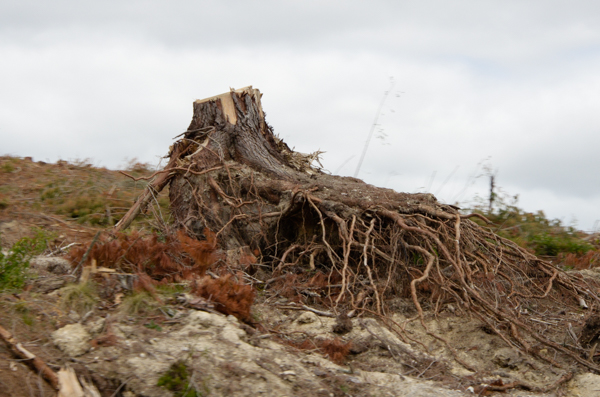 In many areas, however, dairy farming has become more profitable than tree farming, so after harvest the fields are cleared of stumps and other debris, graded and planted in pasture grasses for cattle. 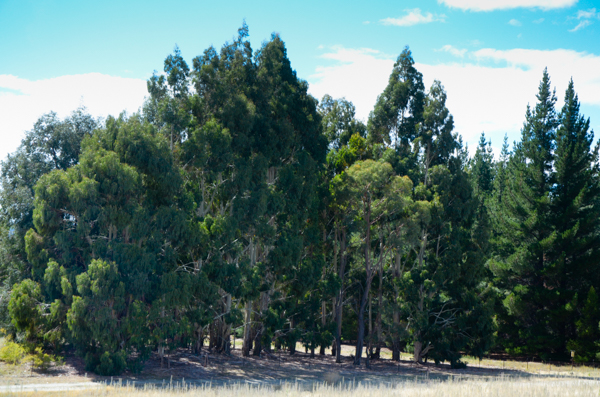 Eucalyptus trees were brought from Australia with the expectation that these fast-growing trees would produce a crop in an estimated nine years and then regrow from the rootstock for three subsequent crops. It didn't work out that way.

The trees grew as tall and straight as anyone might desire, but they grew more slowly than anticipated. It was twenty years to the first harvest rather than nine, and the quality of the wood was also not as good as it was on their native soil. Few groves have been left to regenerate. (This is not a farm; I missed the opportunity to picture those. These are similar trees, however.) 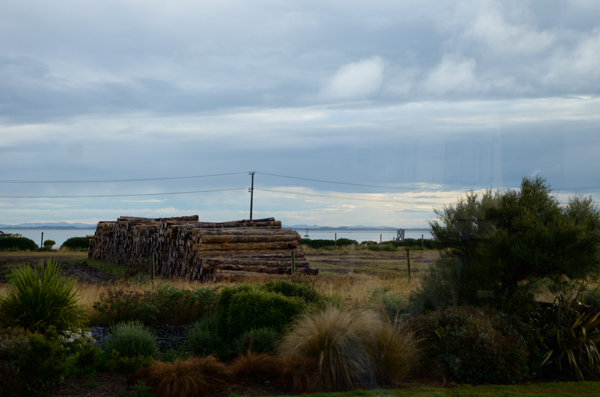 At one time most of the tree farms were locally owned, but in the 1980s, the New Zealand government sold 75-year leases on the majority of the trees owned by the state. The ownership of the land they grew on was retained but the tree "crops" were now owned by overseas investors. The result has been that the export trade has shifted from processed lumber to unprocessed logs. New Zealand industry has suffered as a result of this move, which was taken to raise quick cash for the government.

The logs shown here are waiting at the port of Bluff to be shipped out. All of the ports we visited had similar cargo, usually much more of it, awaiting shipment. 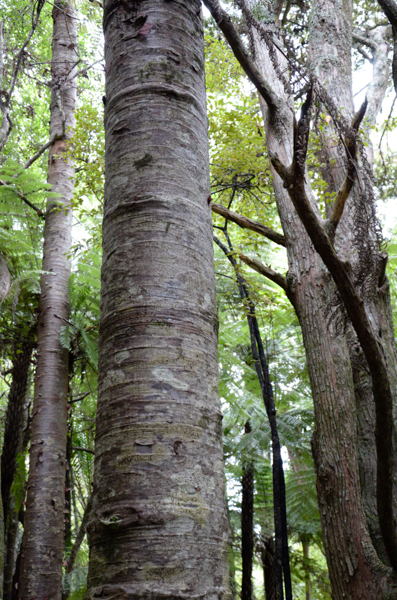 Early in our visit we visited an old-growth grove at Waitakere in the outskirts of Auckland. This grove had not been logged because there was a dispute over ownership at the time that the logging machinery was in the neighborhood. By the time the dispute was resolved, the machinery had moved on and the world was left with a treasure.

This is a young kauri tree. These trees grow straight and tall with a columnar rather than a tapering trunk. Lower branches are self-pruning and don't leave stumps that make knots and other scars in the wood. Mature trees are enormous.

The remaining native forests are now protected. Even windfall may not be harvested. 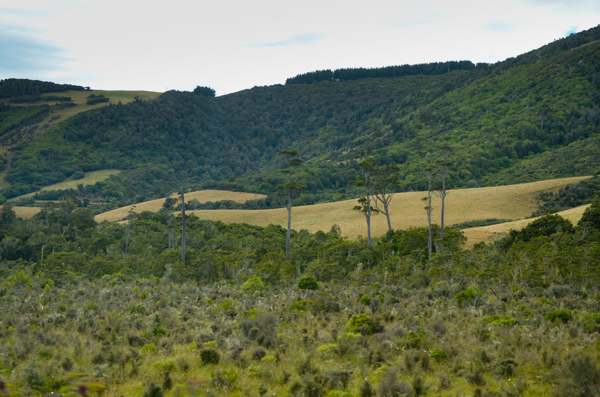 Another highly desirable native tree was the rimu, seen here towering over scrubby regrowth. These individuals were bypassed because of malformed trunks. The majority of trees grow straight and tall and are self-pruning. Additionally they contain a resin that makes the lumber resistant to rot.