After our visit to the Waitekere Ranges and lunch, we travelled to Muriwai Beach to visit the gannet colony. 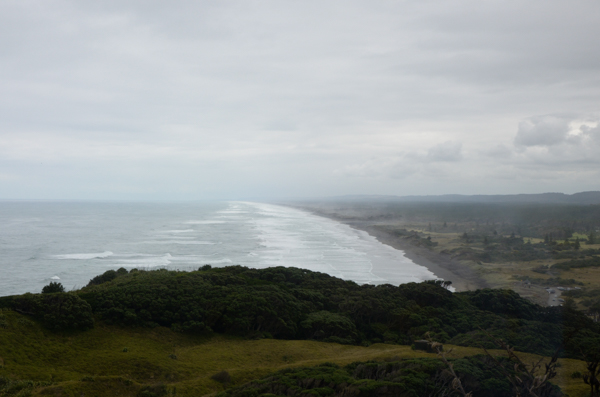 This picture from the bus provides a great preview of the black sand beach of Muriwai. Visibility in the drizzle wasn't great, but you can see how extensive the beach is. 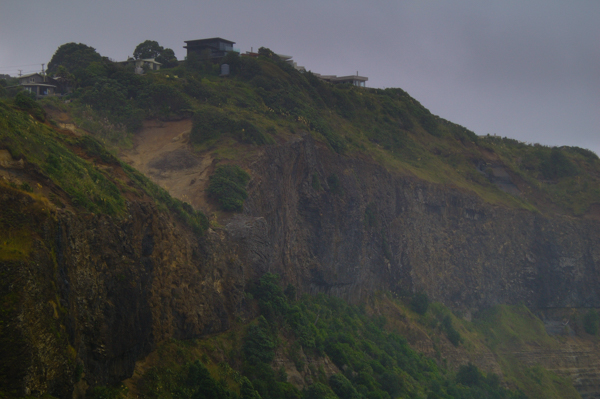 As we unloaded from the bus in the rain, we stopped to look at the geological oddities of this bluff overlooking Maori Cove. The scarp shows pillow lava: densely packed lava tubes from an ancient underwater volcanic eruption.

In the center of the picture, you can barely see a large circular formation through the mist. This was the largest of the tubes. Surrounding it are similar, but much smaller, tubes.

There were a number of surfers enjoying the waves in the cove below this formation. 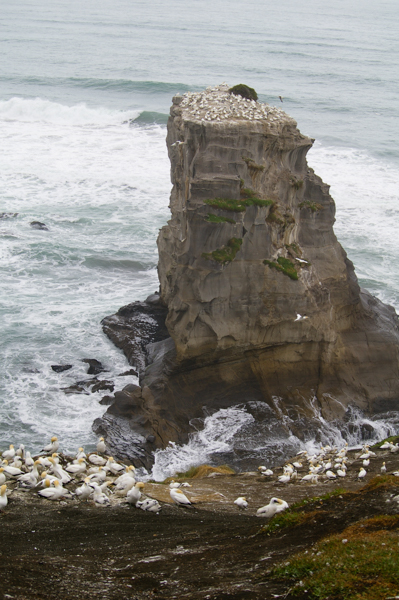 Gannets are large sea birds that nest on islands. We had seen nesting Northern Gannets on our trip to Russia last year. These are smaller Australasian gannets.

A large island several kilometers offshore hosts a thriving colony. It became overcrowded and the birds spread to the tall rock outcropping shown here, which has also reached maximum density. The birds are territorial, so no nest can be within pecking distance of another.

Eventually the nesting area expanded to the mainland shore in the foreground and elsewhere around the headland. It is the only place in the world that gannets nest on the mainland. It is, of course, protected and has become a tourist site.

The mainland area is also getting a wee crowded.

While we watched, we could see some squabbles break out if a bird mistakenly landed too close to a neighbor's nest.

At this stage of nesting the parents have one chick that is close to fledging and taking off on its own.

A parent has returned from a foraging expedition and is greeting his or her mate by bill clacking, neck twining, and wing displays.

The chicks are sporting varying degrees of grey juvenile feathers along with their down. 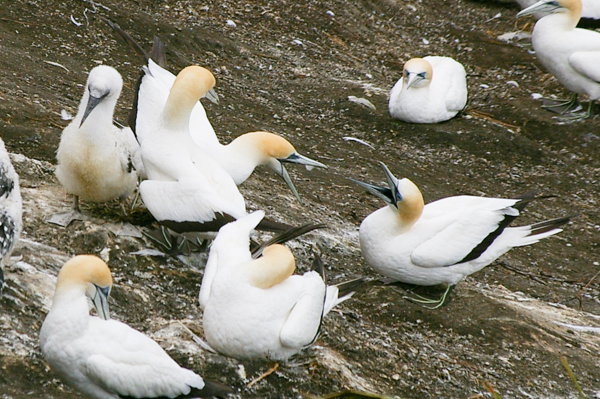 The bird on the right had gotten too close to another nest and is being warned off in no uncertain terms! 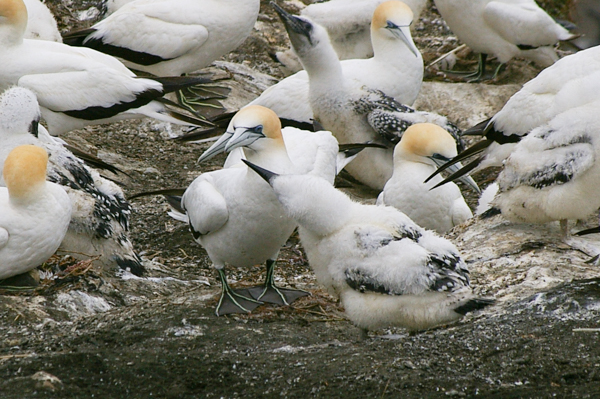 This parent has returned from foraging. After the "changing of the guard," its mate flew off on its own feeding expedition. The chick, partially fledged but with plenty of remaining fuzzy down, is begging its parent for food. 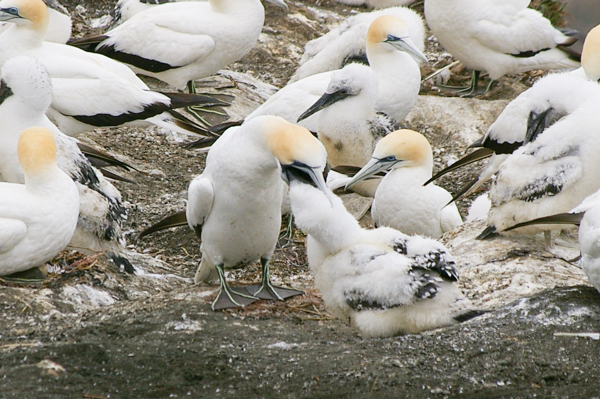 Success! Mom or dad has regurgitated some partially digested seafood for the youngster. Down the hatch! Gerber may not approve, but the chick seems happy.

When not begging, the chicks appeared to sleep a lot. Several looked dead until they moved slightly. Their job is to eat and grow -- hard work that takes a lot of rest! 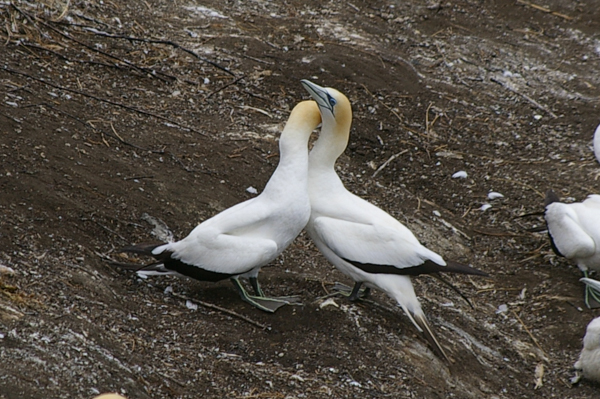 In this and the next three pictures, a young gannet pair are courting. The young unmated birds hang out on the edge of the colony like teens at the mall. 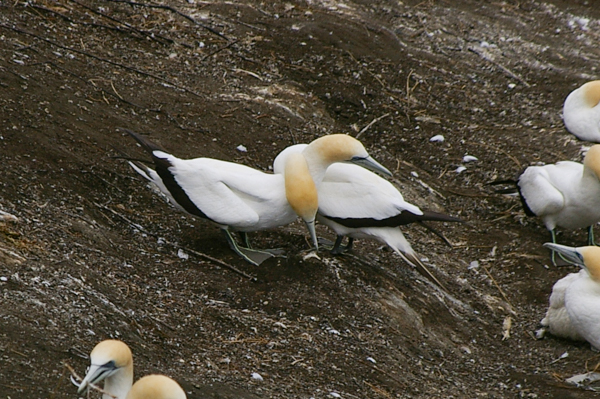 This pair may have found true love. Gannets mate for life like many other birds.

This must be what they mean by "billing and cooing." 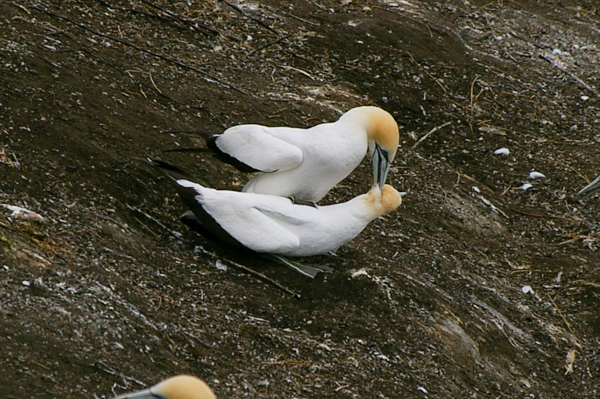 Typical guy -- a gal shows interest and he wants to hop into bed immediately!

It is too late in the season for successful nesting, but these youngsters have clearly gotten the idea. I asked Dr. John and he said that the birds seem to enjoy a little roll in the hay independent of formal breeding.

This bird may not yet have a mate but he or she is busy collecting material for a nest. S/he worked the entire time I watched prizing loose these fibrous roots. At one point the roots gave way suddenly and the bird flipped over backwards! 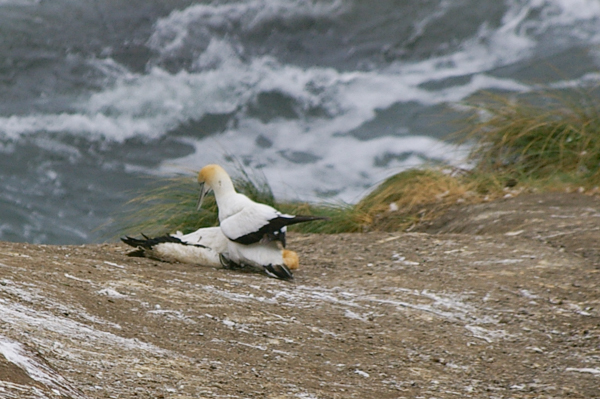 Not all stories have a happy ending. This bird must have misjudged its landing and broke his or her neck. When I first saw it, the dead bird was alone, but before too long the other one came over and seemed to be mourning. I wonder if they were mates. It takes two birds to feed and raise a chick, so if one of a pair dies, the chick is doomed as well. 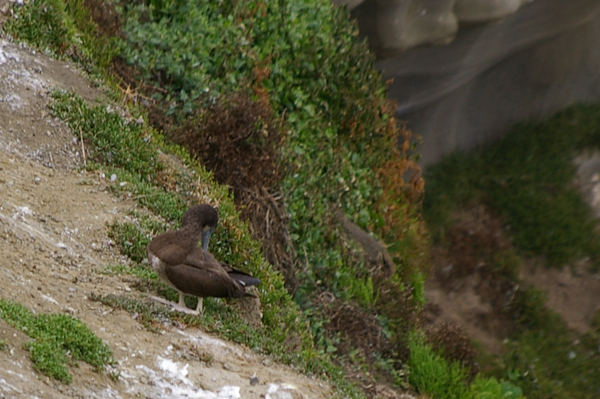 This is not a gannet.

Dr. John said that this brown booby must have been caught in a storm to be blown this far south. I expect he (or she) felt safe in an established colony of seabirds, especially since they are cousins. 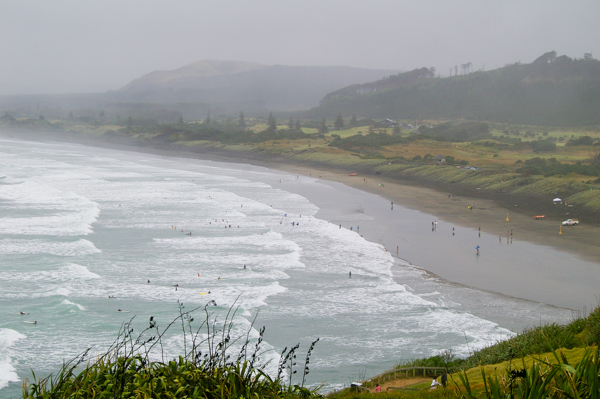 After our visit to the gannets, we drove down to Muriwai Beach to learn some more about the intertidal sea life -- and the beach itself.

The black color of the sand is due to iron. Its chemical bond to titanium prevents rusting. Dr. John brought along a strong magnet to rub around in the sand and show how the grains line up along the magnetic field of the magnet. 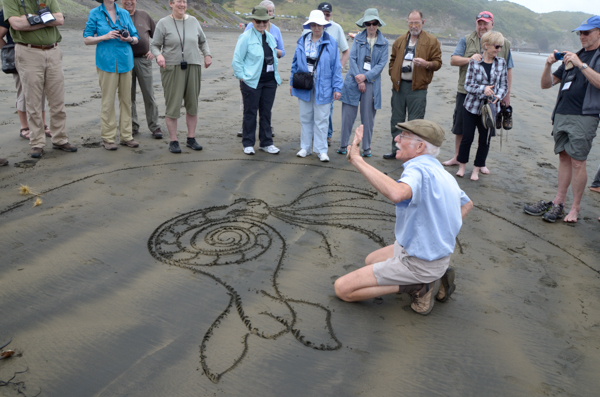 We had time to explore the beach and collect shells of various sea creatures (I found a set of mussel shells and one-half of a clam). One person found a tiny curlicue shell and Dr. John took the opportunity to show us what the creature looks like when alive. It is a mollusk called spirula or ram's horn squid. The "shell" is contained within the living animal. The size of the actual shell was smaller than a dime.

We had a grand time in spite of the drizzle and learned a lot about the sea creatures and birds. What a treat it was!