Our trip started by driving to Dulles and flying Air New Zealand to Auckland via Los Angeles. The trip was not without incident. The night before we were to leave Jim attempted to print our boarding passes, but kept getting an error. United, which was the code-share flight from Dulles to LA, couldn't tell us what was the matter, but confirmed that we had reservations. Air New Zealand couldn't tell us what was the matter either, but they also confirmed that we had reservations. When we nervously arrived at the airport (in PLENTY of time!), it took some gyrations, but United was finally able to print our boarding passes and check our bags through to Auckland.

As we arrived at the international terminal in LA, we heard our names being paged. After minor heart attacks we found that all that was required was for Air New Zealand to check our passports and issue new boarding passes. Whew!

The very long flight from LA to Auckland was quite pleasant. Business class made all the difference. For this flight "business class" is really Business Premiere and more like what we consider "first class." The unexpected luxury made up for boarding pass hiccups.

Luckily our bags arrived with us because one of our fellow travelers had her bag sent to Sydney by mistake and it took three days for it to appear in Auckland!

We arrived in Auckland through a Maori-style gateway. On the other side we met our tour leaders, Suzanne and Dianne, and bus driver, Tony. They shepherded us around the North Island for the next ten days. 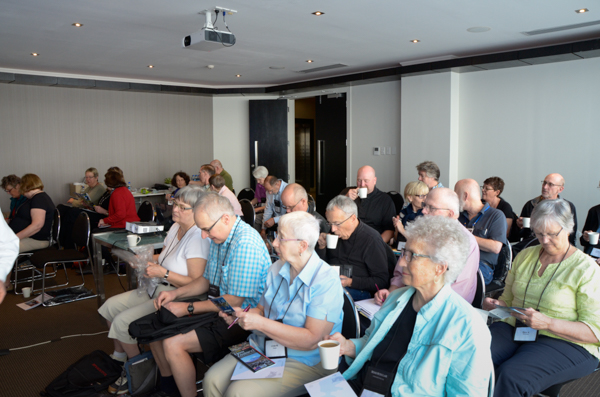 After checking in to the hotel we met for a program overview. Our leaders paced the first day well to cope with jet-lag. We had ample doses of snacks, caffeine, lunch, and a walk in the afternoon sunshine to keep us awake and reset our internal clocks.

Our Group Leader, Suzanne Gordon, who would be traveling with us throughout the program, and our Site Coordinator for the North Island, Dianne Harlow, introduced themselves at this meeting. Traveler introductions were later in the evening during happy hour. 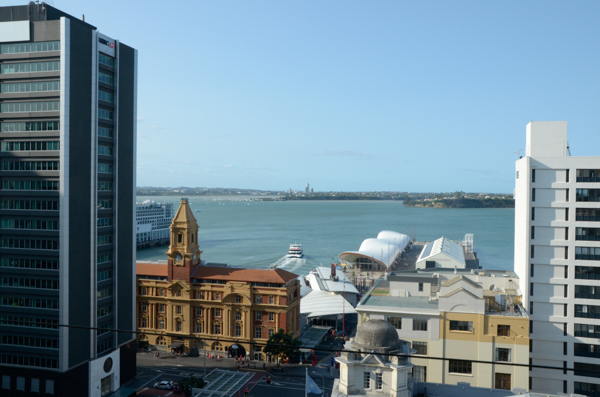 The hotel restaurant had a beautiful view east over the Waitemata Harbor.

"Wai" is the Maori word for "water." Many of the place names in the country include this word because water and water transport were important to the Maori. (Since I didn't now how to pronounce "Maori" before I got to New Zealand, perhaps others don't either: it sounds like MOW-ree.)

Auckland occupies a narrow isthmus between two harbors. The one to the west is the Manukau Harbor.

After lunch most of us gathered for a stroll around the downtown. Our hotel was located in the heart of the business district only a block from the harbor.

The condos and hotel shown here are built on the former main pier. Liners docked here in the days when it was only possible to reach New Zealand by sea. We feel it is remote now because it takes hours to get there by jet. For most of its history it took months! 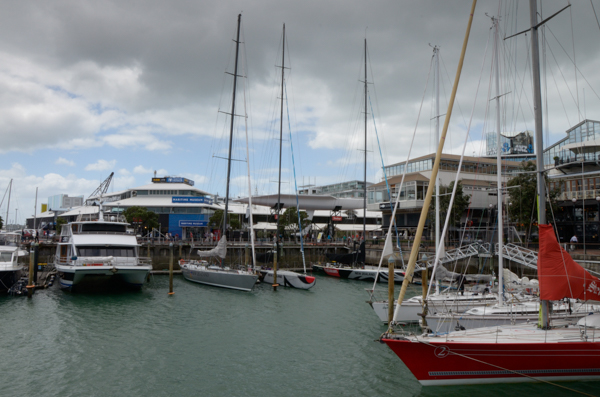 The Auckland Harbor was the home of the New Zealand team's entries in the America's Cup races. (Link opens in new tab.) New Zealand's winning ship was on display in front of the Maritime Museum. The two red, white & black yachts shown in the picture have also competed.

A local company offers a taste of sailing on authentic America's Cup ships. 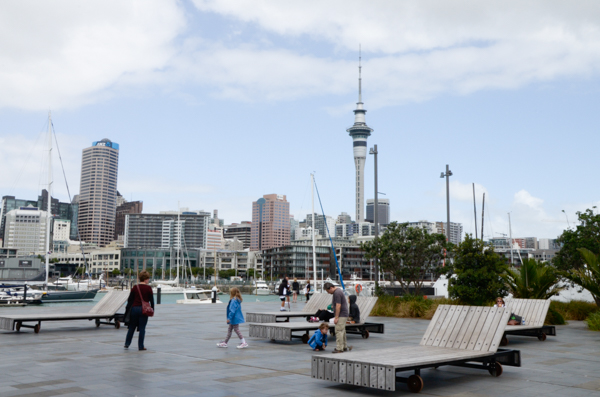 The downtown business district is adjacent to the harbor. The Sky Tower contains a hotel, restaurants, and the SkyJump bungee-jumping concession. One afternoon as we waited for dinner we were able to see someone dive off. We passed on that adventure.

The working part of the port has been moved to another location. This former warehouse area is being redeveloped with condos, shops and other attractions.

The Auckland area is home to 1/3 of New Zealand's population.

Most of downtown Auckland has been redeveloped, but the ferry building has been preserved. Regular ferries still run between Auckland and islands in the bay.

When this building was restored, part of the agreement was that the owners could add the glass-enclosed upper floor to the historic structure. It may be incongruous, but it beats demolition.

After our walk and supper, we tumbled into bed for a VERY sound night's sleep. 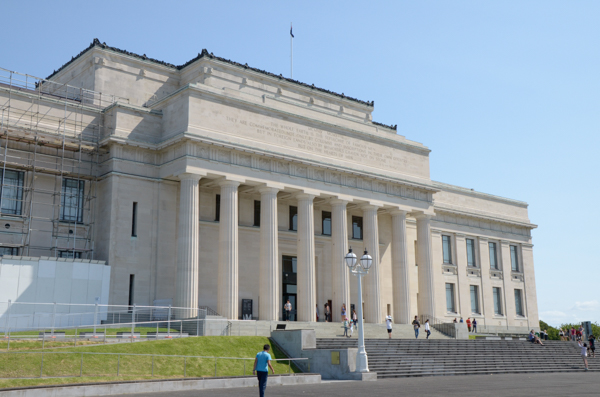 The next morning we enjoyed a lecture by author and historian Gordon McLauchlen followed by a talk on New Zealand geology by Dr. Bruce Hayward.

One new (to us) concept introduced by Dr. Hayward was that New Zealand is actually the 7th continent, Zealandia, even though most of it is under water. This distinction is made because of the geological composition of the undersea rocks.

After lunch as everyone was starting to droop, we were aroused by a visit to Auckland's War Memorial Museum. In spite of its name, we focused on natural history and Maori collections. 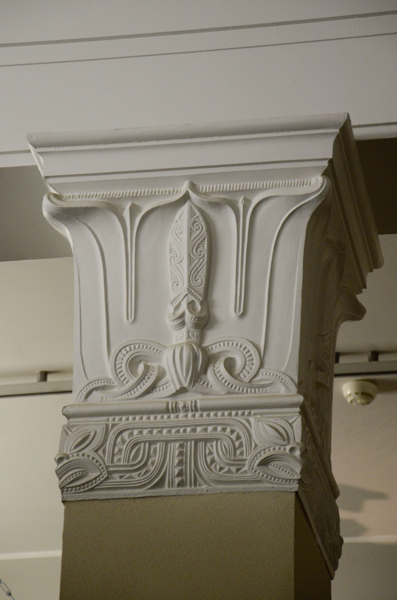 The museum was designed in a Greek architectural style, but it uses many Maori decorative motifs, including the capital design for the columns. 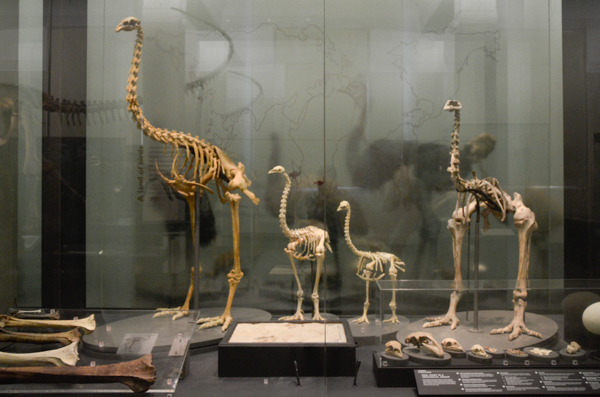 New Zealand was the last major land mass to be settled by humans (not counting Antarctica, which isn't "settled" yet). Accounts vary on when the Maori arrived, but the earliest archeological remains date from the 14th century.

Those early explorers found dense forest inhabited by numerous flightless birds. The only major native predator was an eagle. The only mammals were bats.

The moa species, which included the largest bird ever to live, was soon hunted to extinction by the Maori. The largest of them reached nine feet tall. Only skeletons remain. 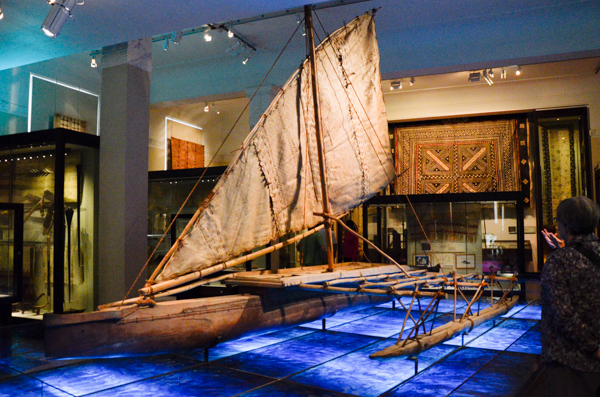 The Polynesians were master navigators and intentional explorers. They used canoes believed to be similar to this one to find and settle new islands. Although their original home isn't certain, DNA analysis suggests East Asia by way of Taiwan and the Philippines. From that homeland they populated the entire Pacific, coming to New Zealand last of all. The Maori call this mythic homeland Hawaiki (hah-wah-EE-kee).

Using large canoes, they brought families, seed stock, and domestic animals with them. Maori genealogies trace back to specific canoes that took part in the migration.

The Maori creation myth starts with Papatuanuku, the earth mother, and Ranginui, the sky father. Even though they had numerous children, they clasped each other so tightly that the children were imprisoned between them. It wasn't until one son forced them apart that light came into being and the world was created.

The tattoos are called moko. The man's extensive decoration was carved into his facial skin and colored in a two-stage process. It depicted his genealogy and status. The woman's tattoos conveyed her status. 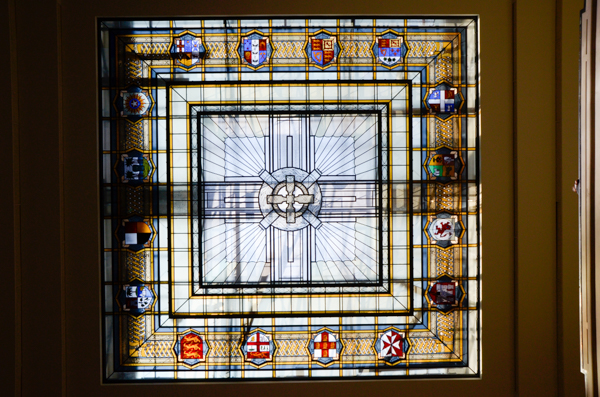 The great stained glass ceiling of the rotunda contains the arms of the nations that have served with New Zealanders (Kiwis) in the wars. The four shields across the top are Australia, New Zealand, the United Kingdom, and Canada. 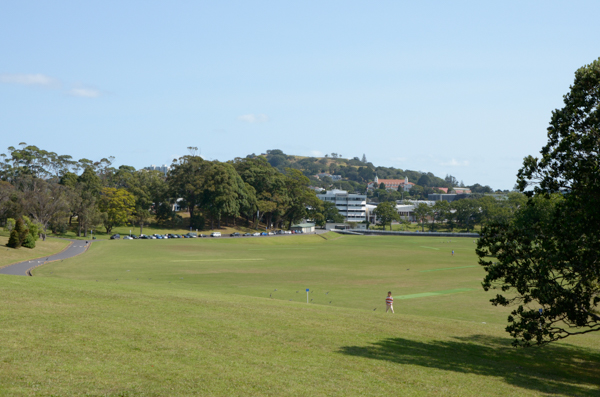 Auckland is built on a large volcanic field. Most of the individual volcanoes are extinct, or at least dormant. The museum is on the rim of this large caldera.

The level parkland within the caldera was the site of US Camp Hale in WWII. 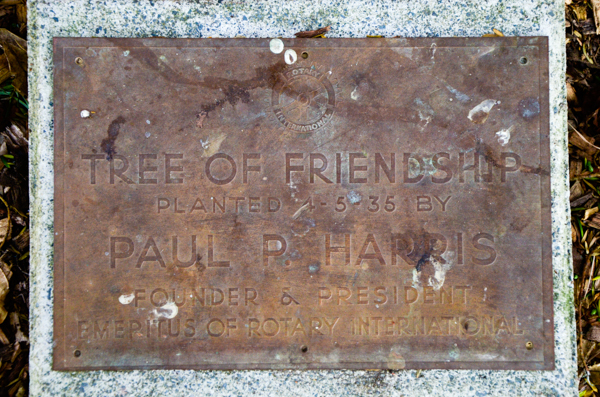 On another rim of the crater is a grove of trees planted by the presidents of Rotary International. It includes this plaque and tree planted in 1936 by Paul Harris, the founder of Rotary.