On our final day in Barcelona we had the morning free for a change. That afternoon we were to meet our group for a tour of the 21st century city. We headed downtown to visit a market that had been closed when we visited the city back in 2012. 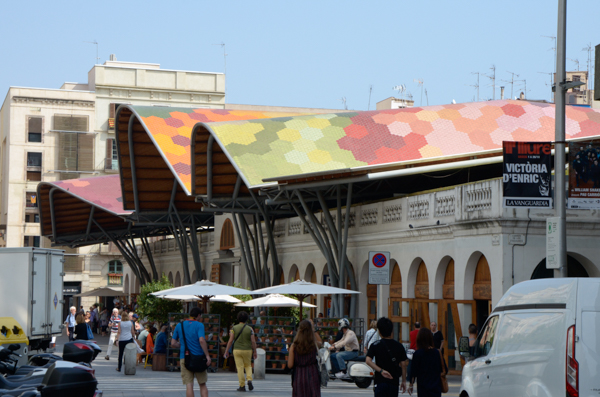 The Santa Catarina market is one of the newer markets in Barcelona. It was originally open-air, but as part of a 2005 renovation this colorful roof was added.

As an unexpected bonus, there was even a Roman archeological site at the rear of the market.

Check out the market pictures below: 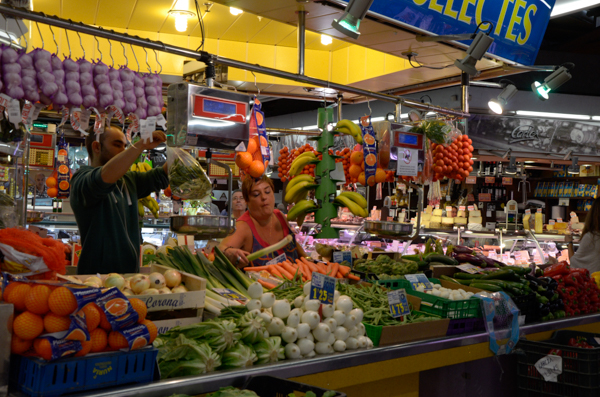 Every kind of fresh produce was available in abundance. 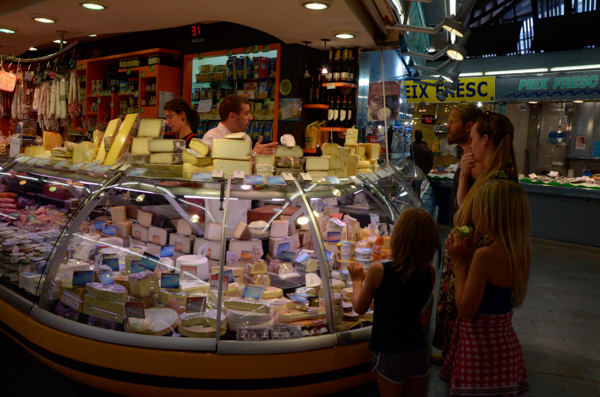 Think of the pitiful selection of cheeses in a typical US supermarket and weep. 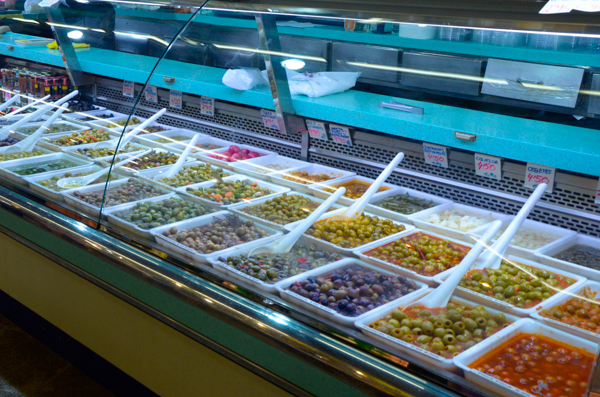 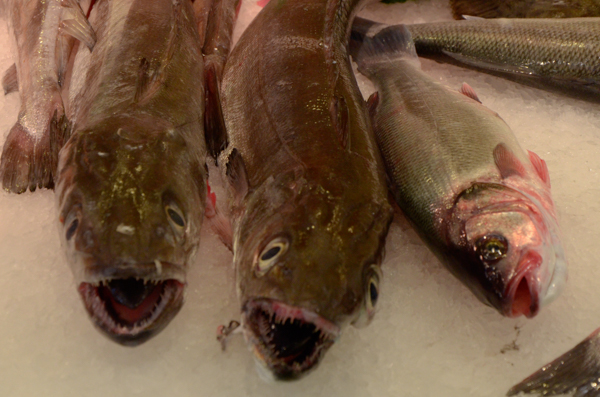 Who's eating whom? Vicious teeth! 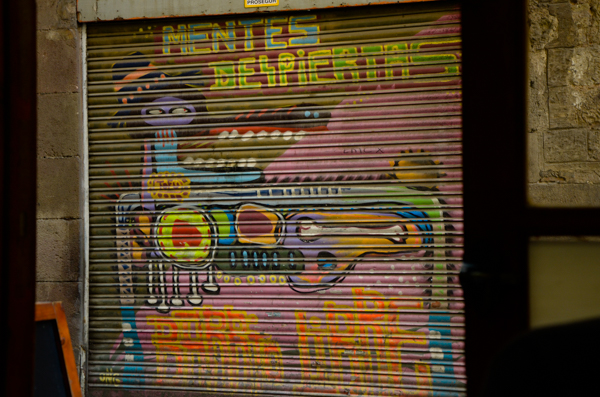 The restaurant at the market was pretty crowded so we prowled around to find somewhere else to eat lunch. We settled into a delightful little place with about six tables. This bit of street art was across the alley.

This was just an example of many such creative installations. It turns out that there is even a Facebook page for Barcelona street art as well as an official tour. Even a feature-length film.

On our way to the meeting place for our afternoon tour I finally got a picture of the illegal street vendors. These folks were ubiquitous in tourist locales like this pedestrian street. They displayed their wares, typically purses, hats or sunglasses, on small tarps with drawstrings, and were constantly on the alert. If a policeman appeared, they could be gone in a flash.

We saw one batch on Las Ramblas scatter to the winds so quickly that by the time the policeman decided who to pursue, there was no one in sight. 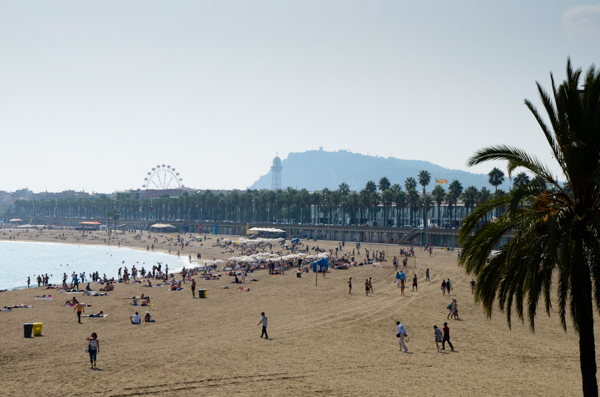 Our bus tour started at the Barceloneta beach. I recall that this is the largest beach contained in an urban area in Europe. This section was relatively uncrowded.

Montjuïc is in the background. 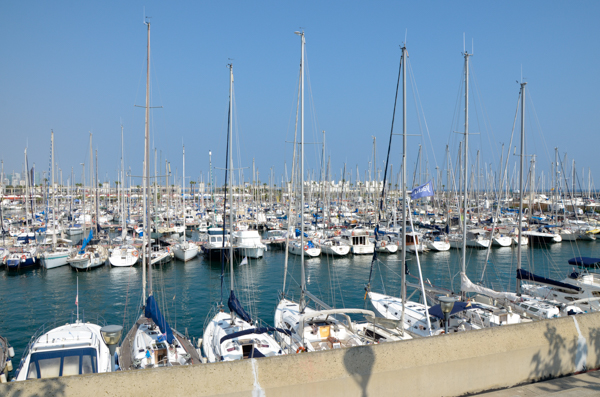 This marina was one the opposite side of the causeway from the beach above. It would be hard to get a postage stamp between some of the yachts docked there. 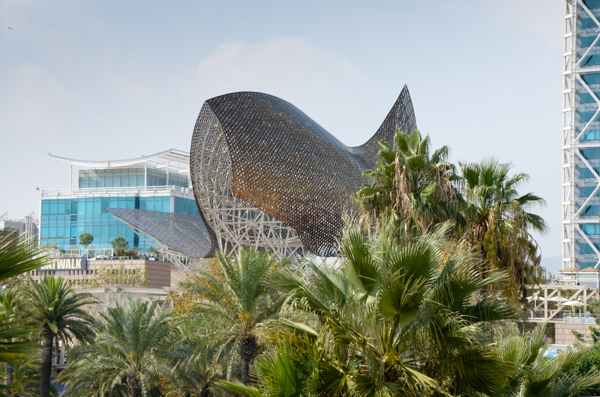 This Frank Gehry fish sculpture was commissioned for the 1992 Olympics. Barcelona used the Olympics to drive redevelopment of the waterfront. I'm not sure how many cities really profit from hosting the Olympics, but Barcelona surely did. 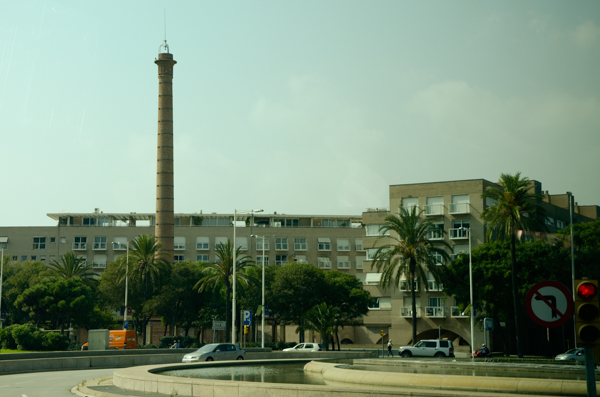 The waterfront had originally been an industrial zone, but the obsolete warehouses and factories were torn down for the Olympic village housing the athletes. This smoke stack was preserved as a monument of sorts.

The housing was designed as condominiums, which were sold prior to the event with the understanding that the athletes would get first crack as residents. After they left, the owners could occupy their apartments.

It was a very successful public-private partnership. 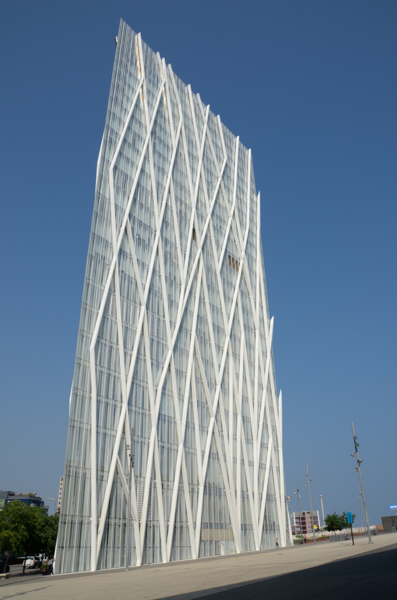 From the Olympic area we drove to a rather depressing area of recent development. Some of the buildings, such as the one on the left, were spectacular. Others were what the Chinese called "see-through" buildings. Construction had been abandoned and the remains were covered with graffiti.

Nowhere in this area did we experience the vibrancy of the rest of the city. Maybe someday.... 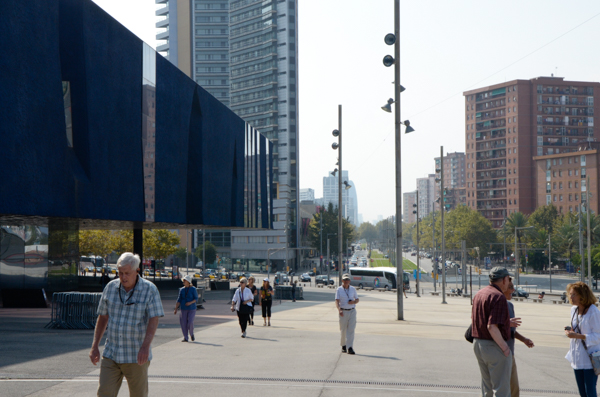 The blue building is the Natural History Museum and Conference Center. We were told (and TripAdvisor agrees) that it is a wonderful museum. The building is lovely. The surroundings are dead. All the people in this picture are from our group. There is no one else.

The avenue leading away from here is Diagonal. This is the end of the same street that passes within a block of our hotel, several miles away.

This location is called the Forum Area. 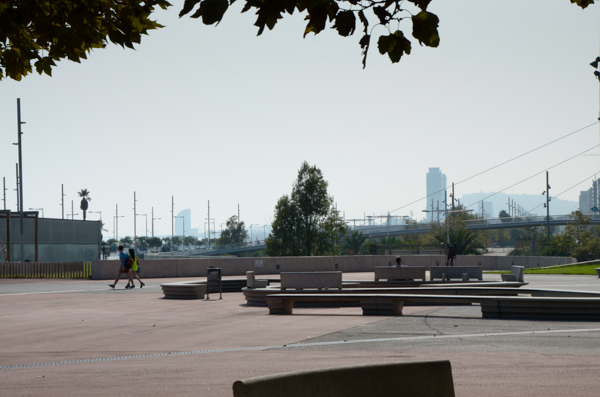 There is a nearby park, which is equally dead. It was basically acres of asphalt and concrete with a few trees here and there. It must be blistering in the summer.

Our guides said that the area is quite popular for evening concerts. Maybe.

These two walkers were the only people we saw in the area that weren't in our group. They appeared to be going purposefully from somewhere to somewhere else -- not here. 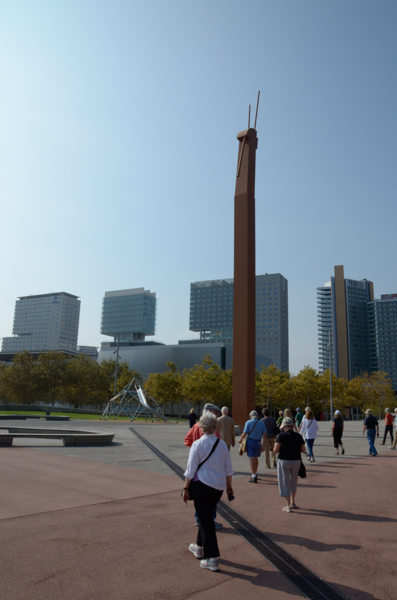 The park was created over the area once known as Camp de la Bota. It was the execution ground for political prisoners during and after the Spanish Civil War. The tall stele is a monument to those who died there.

The construction of an ultra-modern development on top of this tragic place of execution and on the borders of a marginalized neighborhood has been controversial according to research that I've done since returning. This was not discussed when we actually visited the place.

All I felt at the time was that the entire area, however squeaky clean, was creepy.

I hope the conventioneers who visit this area get to see the rest of Barcelona -- the real city. 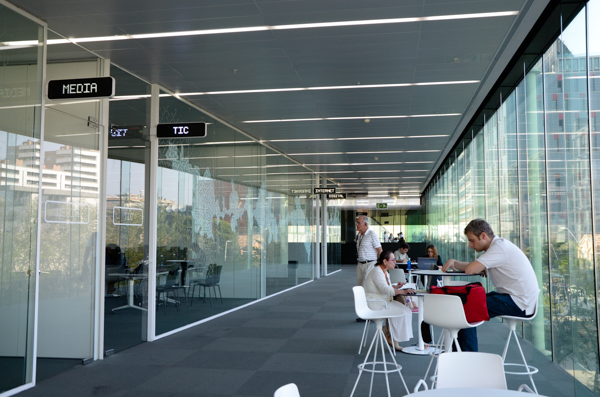 It was with a sigh of relief that we boarded the bus for our next stop. A former industrial area has been redeveloped under the umbrella of 22@Barcelona. We visited the Media-TIC Building, which has an innovative "green" design based on inflatable insulating panels.

It houses training and other facilities to encourage innovation. I think of it as a business incubator.

This was a refreshing change after the dismal Forum. 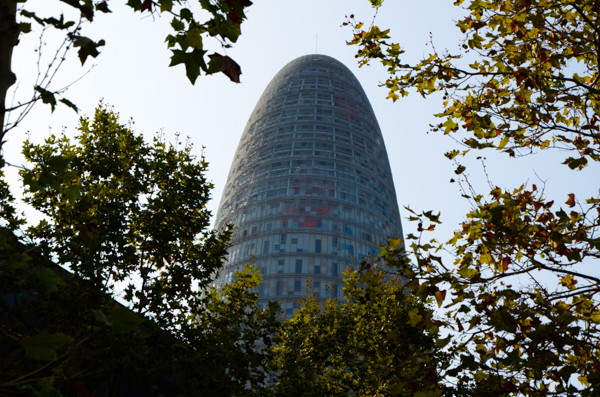 Located in the same neighborhood is the Torre Agbar skyscraper that is visible throughout the city. It is faced with numerous movable panels that shift in response to the light. At night it is illuminated.

It has recently been sold and will become a Grand Hyatt hotel. 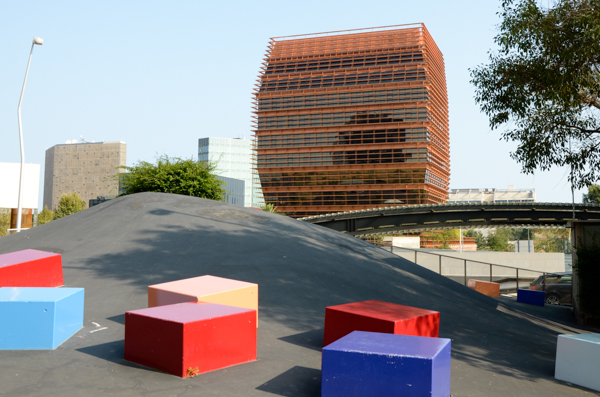 The plaza outside the Torre Agbar building has these whimsical seats on a swooping pavement. The copper-colored building in the background is nicknamed "the sweet potato building." 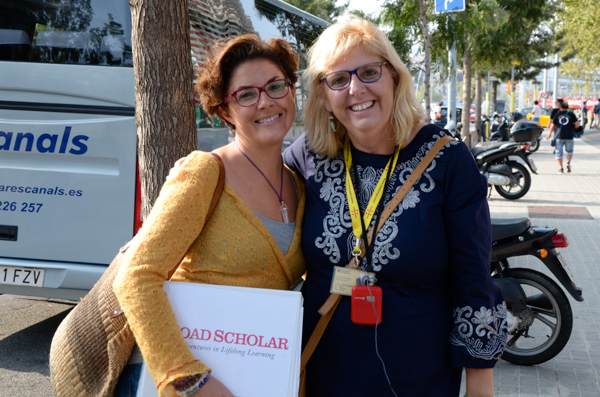 We were thrilled to return to Barcelona even though we didn't visit half of the places we had hoped to see. The "Independent Barcelona" program is an outstanding way to experience this fascinating city.

The program came alive under the guidance of Luisa Forner Mira (L) our capable guide and Silvia Riera, our instructor and local guide. As usual Road Scholar finds the very best leaders!