After Casa Batlló, we headed back to the Gothic Quarter to visit the Museu d'Història de Barcelona (MUHBA) or the Museum of Barcelona History. In order to get the English version of the site, you will have to click the arrow next to Català at the top of the page. English and Spanish are the other alternative languages. Although there are several sites associated with the museum in various locations, the part we visited is located on the Plaça del Rei. Underneath the museum and the plaza are remains of the Roman settlement of Barcino. 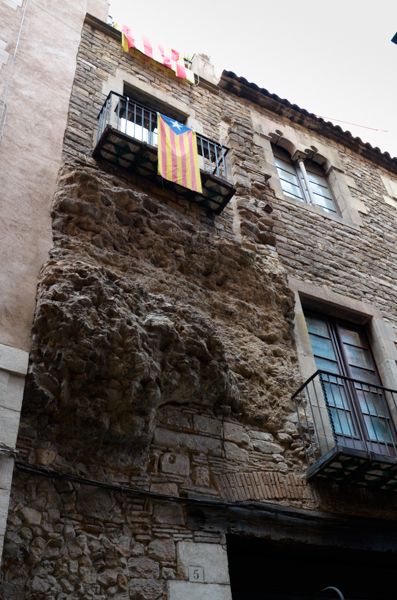 There are ancient Roman ruins above-ground throughout the old quarter. A portion of the old wall has been incorporated into these "modern" buildings.

The flag hanging from the balcony was a familiar sight throughout our time in the city. It indicates support for Catalan independence.

A referendum on independence was very much in discussion during our visit. The Spanish government had forbidden the vote, which was held eventually in November, 2014, anyway. Over 80% of those voting were in favor of independence, but Spain still considers the vote illegal. The national government is threatening contempt of court proceedings. In 2017 there was yet another referendum that favored secession. As of this writing the Spanish government was moving to take over the Catalonian government.

This square, the Plaça de Sant Jaume (Plaza of St. James), was the center of the old Roman city. It is now bordered by this building, the Palau de la Generalitat de Catalunya, and the Barcelona City Hall, which faces it.

We were unable to visit the square on our tour of the old quarter because it was jammed with spectators of the climactic La Mercè festival.

The crane is disassembling some of the structures left from the festival.

Casa Padellàs is a Gothic structure dating back to the late 15th century. It was threatened by road construction in the early 20th century and moved, brick by brick, to the Plaça del Rei.

Digging for the foundations for the building uncovered the Roman ruins that are now a primary feature of the site and now the casa is the entrance to the museum and excavations.

The graceful arching stairway from the courtyard to the first floor was a prominent feature of several of the Gothic buildings we visited, as was the arcade above it. 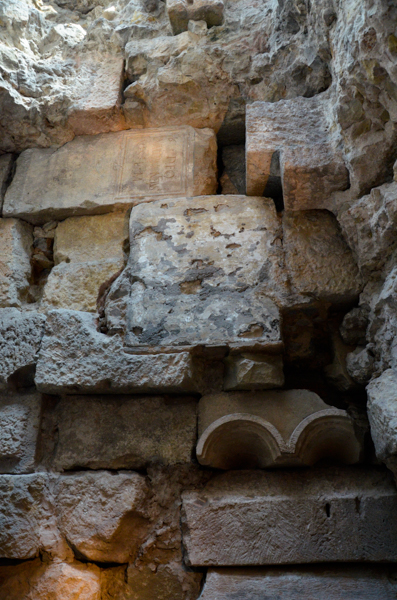 Before descending to the Roman area we visited a section describing prehistoric settlement. The area was occupied by the Iberians beginning in the 6th century BC. The Romans arrived in the 1st century BC and founded Barcino. It was a small outpost with a maximum population of 1000 individuals.

20th century art made of "found objects" has nothing on the European penchant for reusing any and everything in construction. This wall includes fragments of this & that including an inscribed plaque, perhaps a gravestone. It was typical of many that we saw. 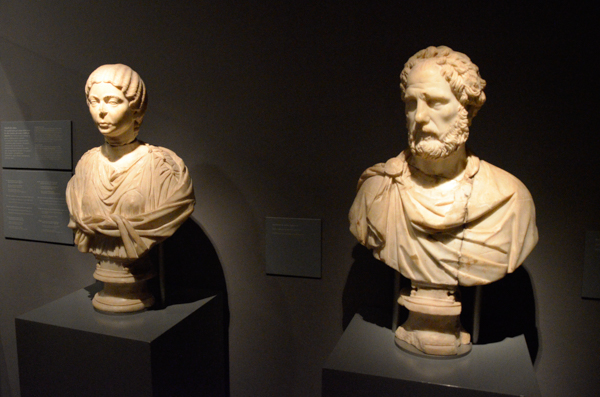 Although Barcino was small, it had prominent families. I forget exactly, but I think these sculptures were of a husband and wife.

Part of the area that had been excavated was residential with comfortable "townhouses."

Another area contained a large laundry with dying facilities. It featured an area along the street which was a public toilet. Urine was collected and used as a disinfectant as part of the cleaning process. Eeuuw! 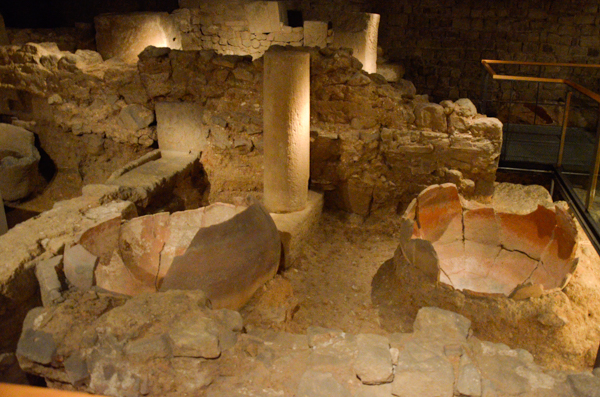 Another area was dedicated to the production of garum, a much prized sauce used by the Romans. It was made from fermented fish guts. Yummy! This picture shows the remains of the vats.

Chemical analysis has been used to identify the various products of the ancient remains, by the way; it isn't just the fervent imagination of archeologists. 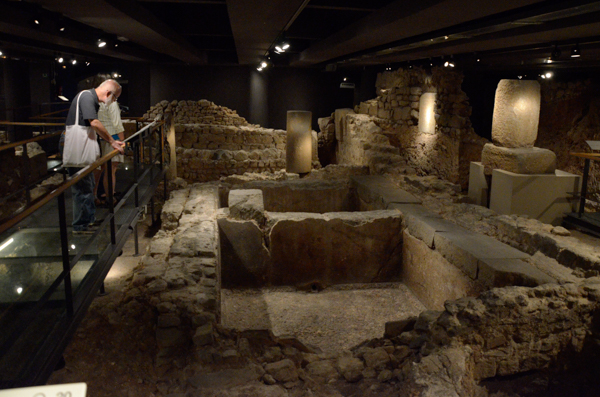 Another manufactory found in the area was a winery. The area was noted for its wine with the height of production from the 1st century BC to the 2nd century AD. 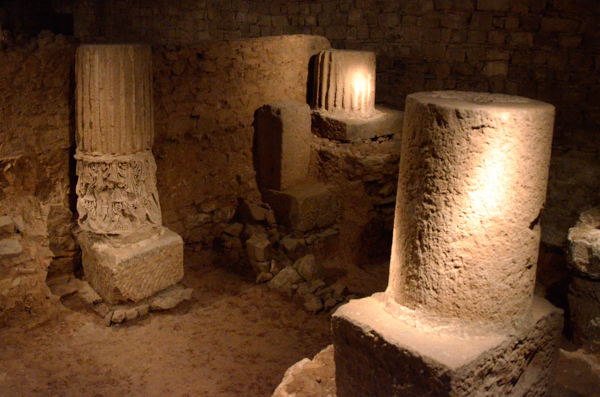 Another site preserved was an early Christian church built close to the walls. As above, various pieces are reused, such as the old capital as a column base. 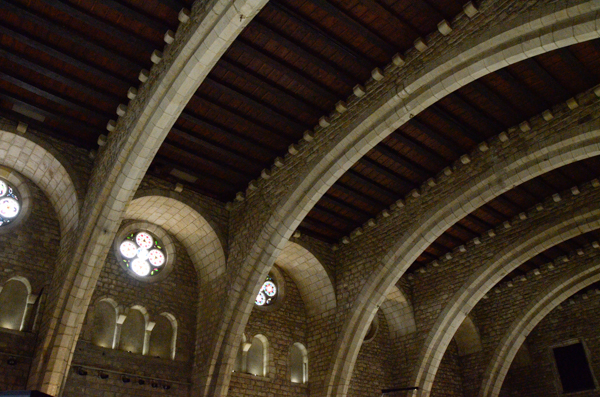 After completing our tour of the underground city, we visited the Saló del Tinell, built in the 14th century as part of the Royal Palace. This hall with an enormous span characteristic of Catalan Gothic construction, was currently being used for an exhibit that (personally speaking) cluttered up the lower area with ugly temporary panels. It wasn't possible to experience the hall in its entirety set aside get a picture of it.

I don't recall what the exhibit was about. The building was stunning.

Unfortunately there don't appear to be any good photos on the WWW either. 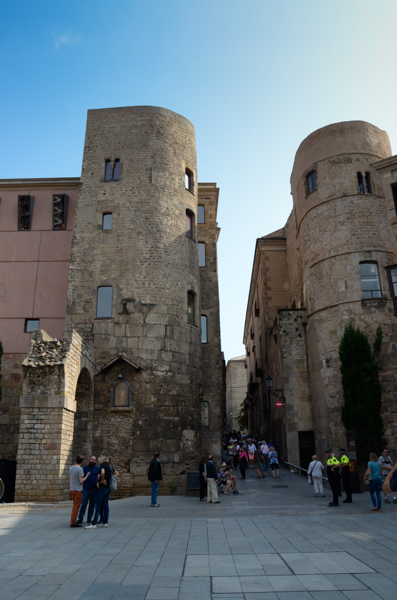 After the museum visit, we walked back through cathedral square. There are remains there of the ancient Roman city gates, shown here.

Our primary goal, however, was scouting out a restaurant we remembered from our earlier visit to the city. We were planning an expedition to a guitar concert at the chapel of Iglesia de Santa Ana that evening, which was very close to where we remembered its being located.

We found the restaurant and returned that evening with others from our group to have dinner. It was just as good as we remembered. It is a local place and one of our number was astonished that in such a cosmopolitan city as Barcelona, they didn't speak much English. (At least they now have an English menu, although the spelling was somewhat fractured!)

The subsequent concert in the 12th century chapel of the church, was wonderful. The young man who performed was named Alen Garagic.