The schedule for the next day included a lecture about artists associated with Catalunya: Picasso, who moved to Barcelona with his family at age 13, Dalí, who was from Figueres, northeast of Barcelona on the sea, and Joan Miró, who was from Barcelona. He established the Joan Miró Foundation on Montjuïc. After the lecture, there was a tour to the Picasso Museum. We passed on that opportunity and took off to see Casa Batlló and the Barcelona Historical Museum.

The Batlló family commissioned Gaudí to renovate an existing building that they had purchased in the fashionable Passeig de Gracia neighborhood. The original building was undistinguished, but by the time the remodel was complete it had taken on a distinct personality.

In addition to the whimsical modernisme design, Gaudí incorporated numerous functional and clever solutions to design problems such as lighting and ventilation.

The floor about the ground level, seen here with the enormous windows, was called the "noble" floor. It, plus the floor above, was the main residence of the Batlló family. Separate rental apartments were on the other floors.

One function of the large windows was so that the family could "see and be seen" by the passersby.

The local nickname of the house is "house of bones" from the skeletal appearance of the columns.

The entire facade is covered with colorful ceramic trencadis and circular plaques. The balconies look like masks. 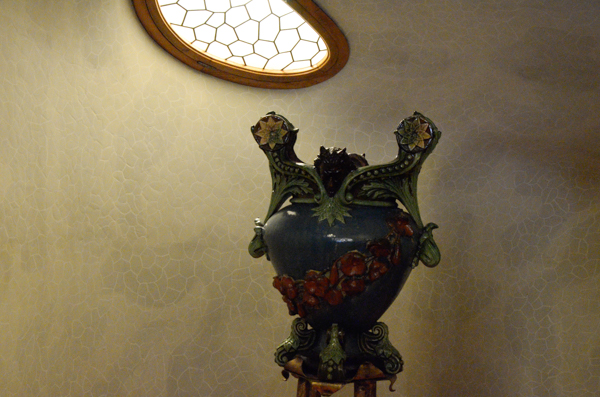 Not much to say about this urn but I liked the picture.

Skylights show up in unexpected places in this house. 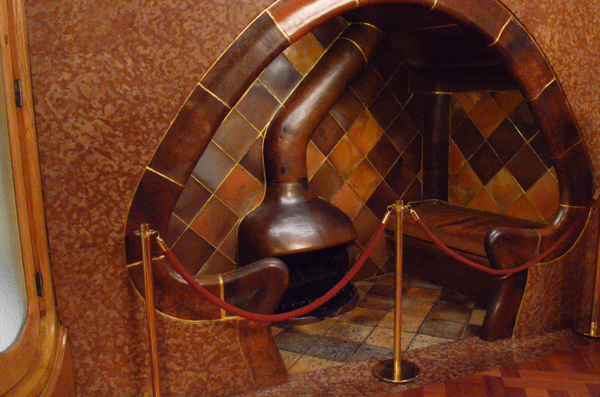 This cozy inglenook would have been a great place to snuggle up on a chilly day.

There were many places in the house that had a marine theme. This ceiling light in the living room suggests a sea anemone. Likewise the swirling pattern of the plaster suggests liguid.

The view from inside the living room.

The windows were counter-weighted like standard sash windows and could be raised and lowered for ventilation.

All visitors had electronic devices to tell the story of the house in their desired language. It was a bit eerie to see crowds in every room looking and listening in silence. 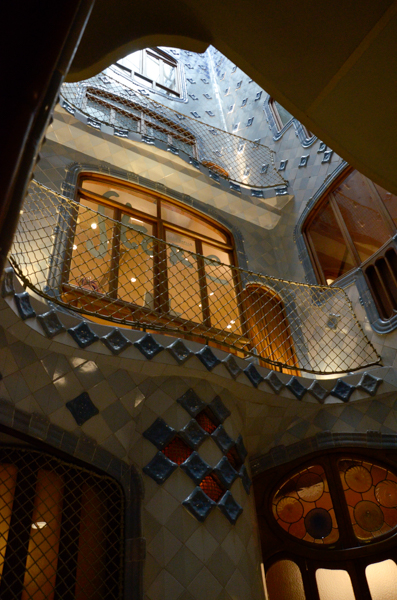 The light wells in the center of the building are designed to bring natural daylight to all levels. The glossy tile reflects the light and the tile color is shaded. Darker tiles are at the top to minimize glare and lighter shades in the lower levels heighten the reflection.

The windows are also smaller on the top levels and increase in size on the lower floors. 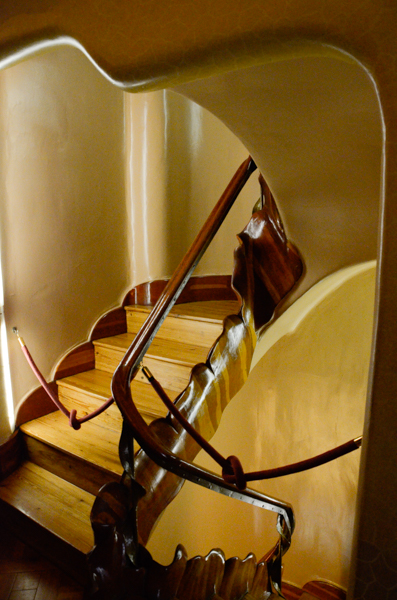 The house has an original elevator between the two light wells that serves all the floors, but there are also staircases. We used the stair around the elevator shaft, but this lovely one was included in the main apartment to serve its two levels. 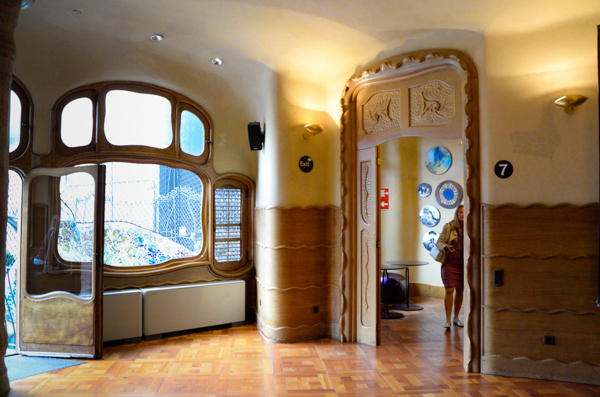 The marine theme is clearly evident in the dining room with the wavy wainscoting and the shell-like carvings above the door. 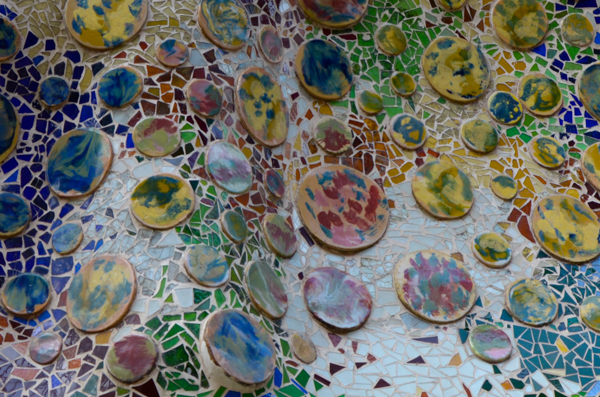 A close-up of the ceramic exterior decoration.

This particular shot was taken through the dining room window. There was a kind of simulated pool there. 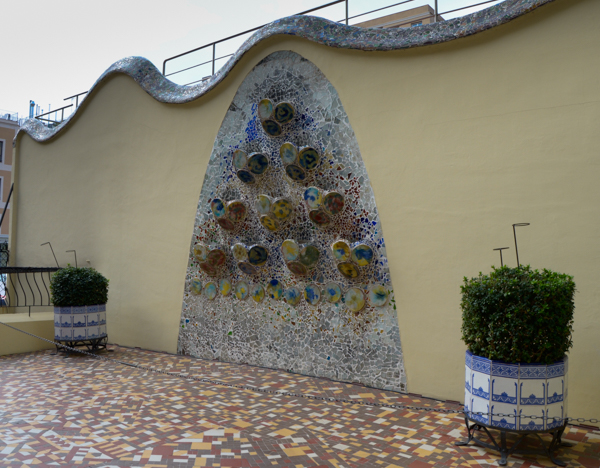 There was a large patio outside the dining room. The back wall included this decoration that contained "planting boxes." I would like to have seen it with some plants growing in the containers, but I expect they would be pretty high-maintenance. 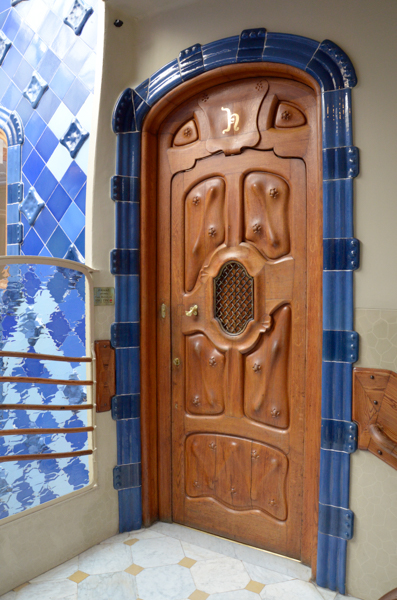 The doors to the various apartments (I think there were two per floor on the upper levels) were quite fanciful. Instead of numbers they had letters, "h" in this case. The other apartment on this level, which was the highest, was "i." 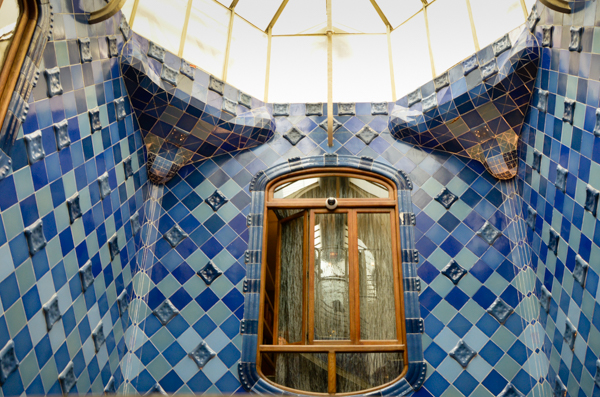 As you can see, at this highest level, the light well ceramics are dark blue to limit glare.

Some of the most interesting parts of the Gaudí buildings are the attics. He has used the catenary arches to great effect here and the horizontal "skylights" with the white walls provide ample lighting. 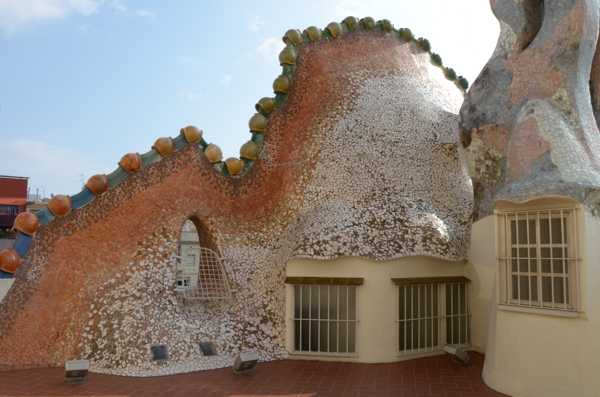 Another Gaudí roof gives the phrase "over the top" new meaning. This is looking towards the street with the "dragon's back" parapet.

The ventilation shaft and stairwell are stunning both inside and out. See below for the interior of the stair. 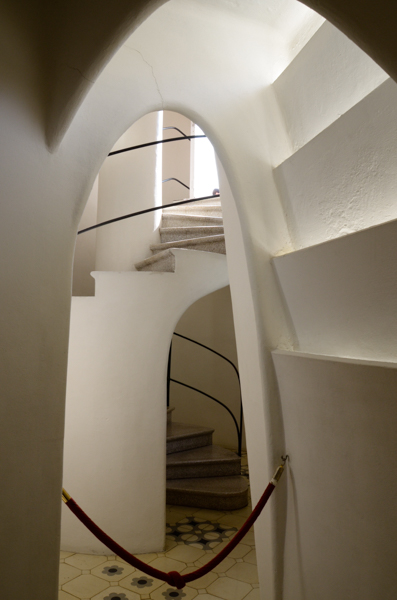 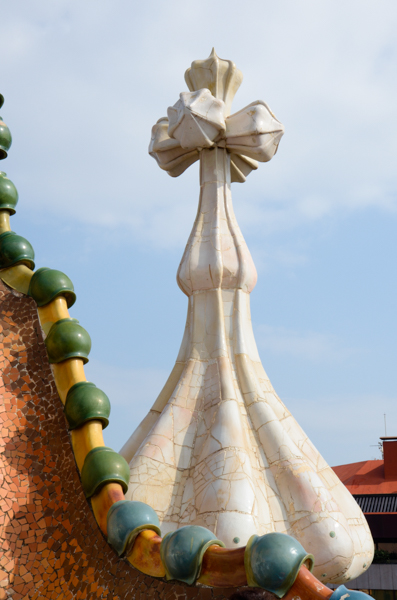 During one of our lectures, the presenter passed around a common local nutmeat that had the same shape as the cross shown on this tower. She used it illustrate the amount that Gaudí drew from nature for his designs.

I wish I could remember what kind of nut it was. It really did look very similar.

Of all the sights that I saw on our visit to Barcelona, this house was my favorite.

After visiting Casa Batlló, we headed downtown to visit the Barcelona History Museum with its excavated Roman ruins.