The following day we were scheduled to visit the Gothic Quarter (Barri Gòtic), or center of the old city. It also happened to be the climactic day of La Mercé and the area was expected to be jammed. Luisa and our city guide managed to find relatively uncrowded paths through the crush. That was a major relief to me since I tend to get a trifle panicky in such situations. When the crowds were unavoidable, I was surprised (and pleased) to find that traveling with a group helped. Strength in numbers against the numbers or some such.

As a Road Scholar guide, one of Luisa's primary instructions is not to lead us into a dangerous situation or let us get lost (if she can help it). It made for some creative, and probably stressful, leadership on her part.

Luisa felt that the bus would be less crowded than the subway, so we all marched across the street to the bus stop. This was the point of departure for many of our expeditions. 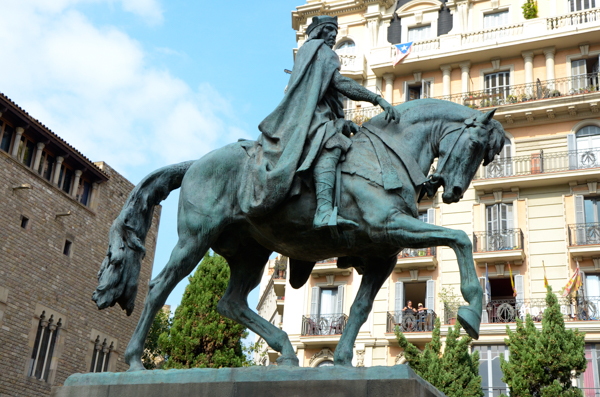 Our expedition into the Gothic Quarter began at a small park dominated by a statue of Ramon Berenguer III (The Great), Count of Barcelona in the 12 century. The statue dates from the late 19th century. His rule included Catalunya, Provence, Majorca and Ibiza, but he divided his lands among his sons at his death: Ramon Berenguer IV received Catalunya and the other son, confusingly called Berenquer Ramon, received Provence.

RB IV married Petronilla of Aragon and their son Alfonso II became King of Aragon, as well as the Count of Barcelona. In the 15th century their descendant Ferdinand of Aragon married Isabella of Castile and Spain was the result. 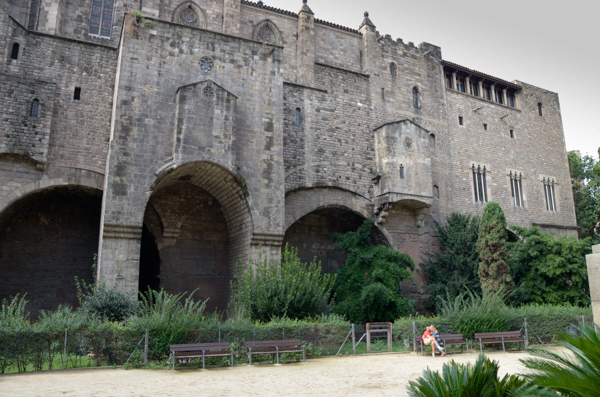 The ancient Roman walls run along the back of the park. They have been incorporated into later buildings, such as this Chapel of St. Agatha.

It's possible to see the various layers of arches in this picture.

Later we were to visit the other side of the Roman walls in an archeological excavation underneath the modern city. 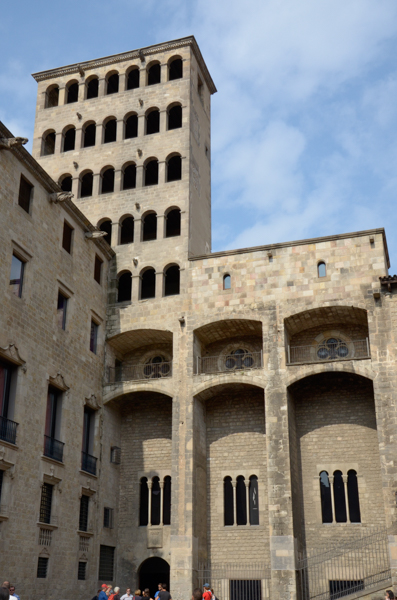 Just inside the Roman walls is the Plaça del Rei.

According to local lore, Columbus was welcomed here by Ferdinand and Isabella on his return from the New World.

We would return the following day to visit the City History Museum, which is located on this plaza. 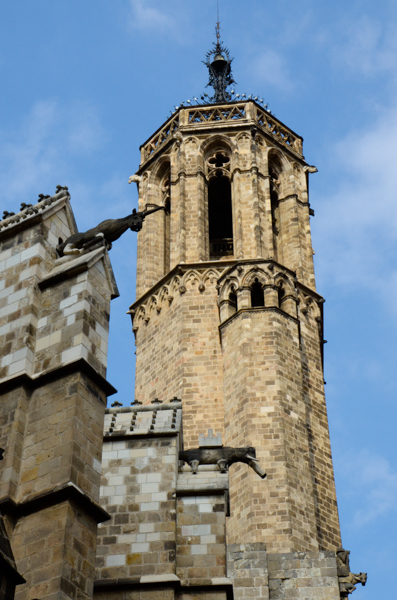 We followed the narrow & twisting streets from the plaza toward the Barcelona cathedral. These two bell towers (the shorter one in front) were built in the 14th century. The gargoyles were all unique. The two shown here are a unicorn (on the left) and a very fanciful elephant.

A couple had set up their puppet show in a small corner behind the cathedral. They had attracted a crowd of children and their parents.

This boy and his sister were making their way to leave a few coins to express the pleasure they had in the show. 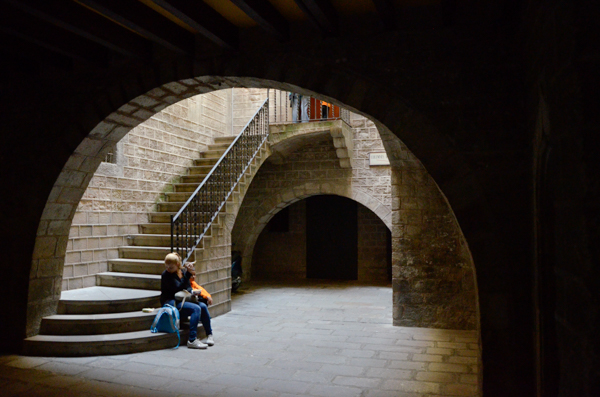 We took a small detour on the way to the cathedral to visit the remaining columns of the Roman Temple of Augustus. The entrance was through this medieval courtyard. The plaza containing the columns was too small and the columns too large for me to get a good shot of them. I preferred this quiet space anyway. 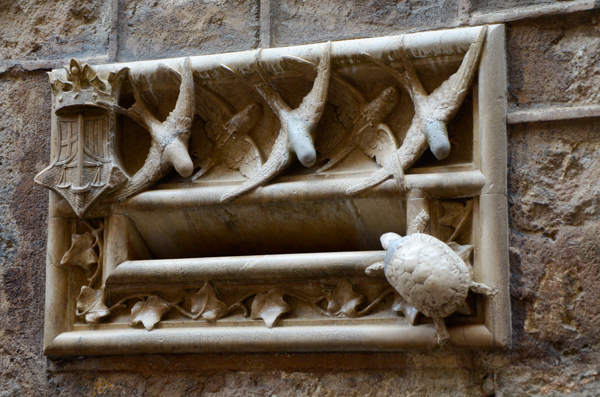 Another stop on the way to cathedral was this curious mail drop. There are variety of stories on the WWW about its origin and interpretation. The one at the link best matches what we were told. The swallows represent how quickly justice should be delivered; the tortoise represents the reality.

All agree that it was sculpted by Luís Domènech i Montaner, who also created the Hospital de Santa Creu. 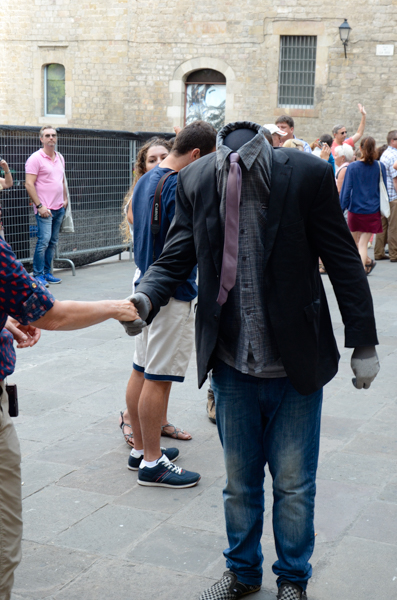 There were all kinds of buskers and other street entertainers in addition to the puppeteers shown above. This headless personage was amusing many folks in the plaza outside the cathedral.

Most of the cathedral plaza had been used to set up a giant stage for musical acts. The barrier seen to the left in this picture was the back of the stage.

Because of the stage it wasn't possible to get a picture of the facade of the cathedral. Actually even though the cathedral itself is quite old, having been started in the 14th century, the existing facade is 19th century. It is based on the original 14th century design. 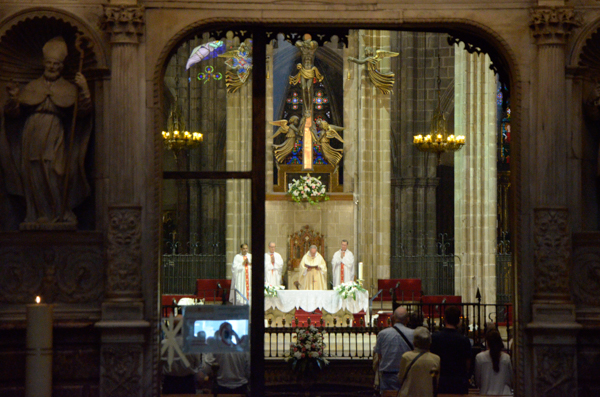 There was a mass in progress so we couldn't go into the main part of the nave to capture pictures of it.

Catalan Gothic churches are unique in that they don't use flying buttresses like Gothic cathedrals in other countries. They tend to be wide rather than high, and use interior buttresses with chapels in the recesses between them. 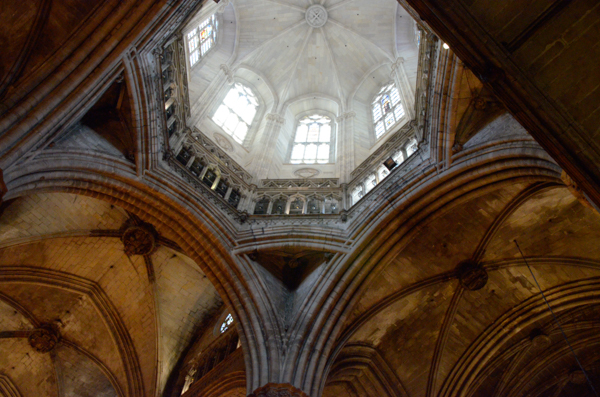 The view up into the spire, which provides light to the interior. 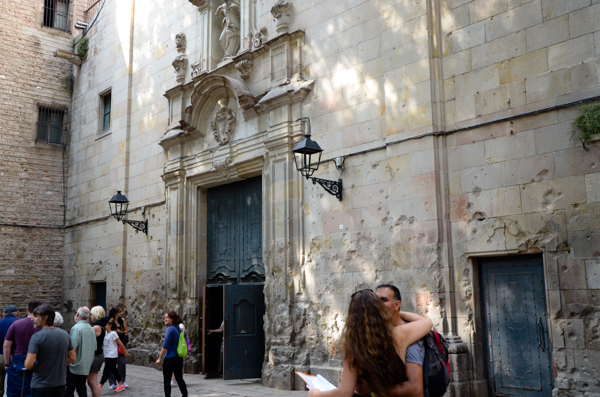 As we made our way from the cathedral to the medieval Jewish Quarter, we passed through the Plaça Sant Felip Neri. During the Spanish Civil War Fascist air forces bombed the square killing many, most of them children, who had taken refuge. The church was largely destroyed. When it was rebuilt, the damaged lower section was left as a memorial. Today it is a pleasant shady park in the center of the city.

Gaudí was on his way here when he was run over by a streetcar. He died not long afterwards from his injuries. 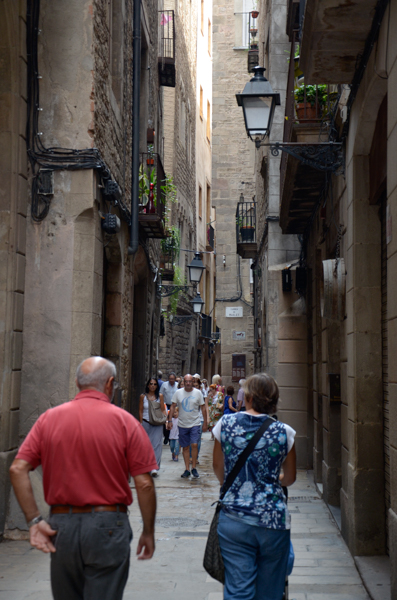 This is one of the streets in the old Jewish Quarter. Barcelona, like the rest of Spain, once had a large Jewish population, but beginning in the 14th century with the Inquisition, the Jews were either forcibly converted to Christianity or expelled. By the 15th century almost all were gone.

It wasn't until the 19th century that Jews returned to Barcelona.

An ancient synagogue was located in the city that may be one of the oldest in Europe. It has been restored and we had hoped to return and visit, but ran out of time. 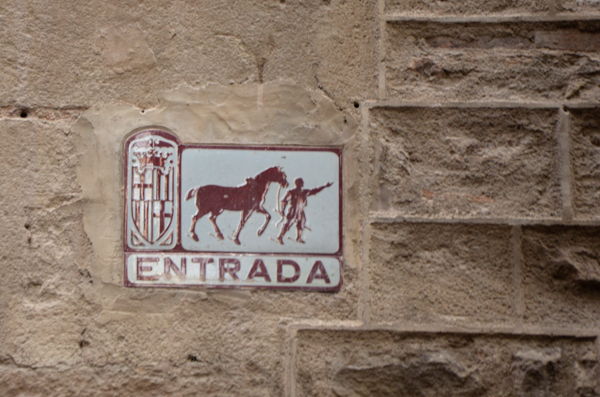 Throughout the Gothic Quarter the narrow streets, which are now pedestrian only, were one-way for traffic. The intersections were marked with these plaques, which would identify entrances (Entrada) or exits (Salida).

This particular plaque can just be seen in the picture above.

Even now some of the streets allow delivery vehicles at certain times of day. 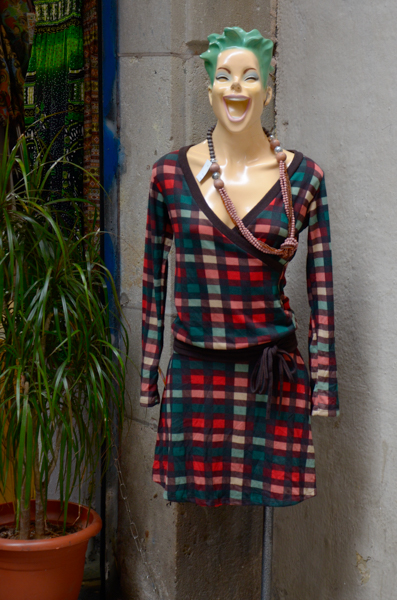 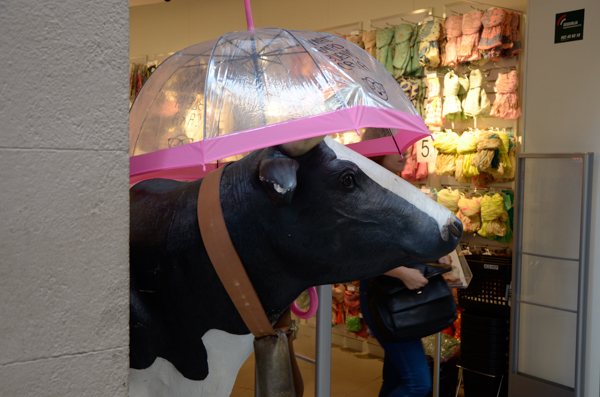 For some reason at least a couple had cows on display. 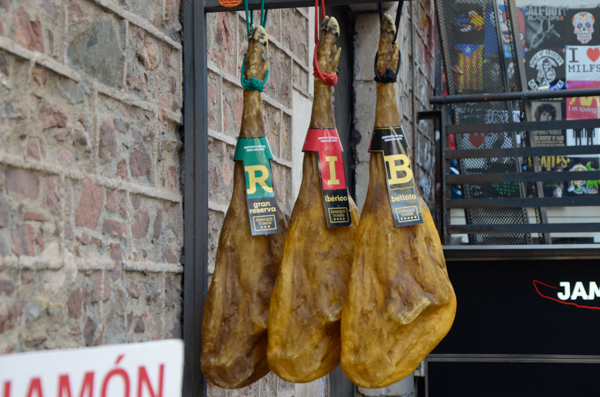 Another shop display featured this selection of Iberian hams. They are in various grades from the basic to-die-for to died-and-gone-to-heaven (L-R):

At one time these could not be imported into the US. That has changed, but they are almost worth their weight in gold. 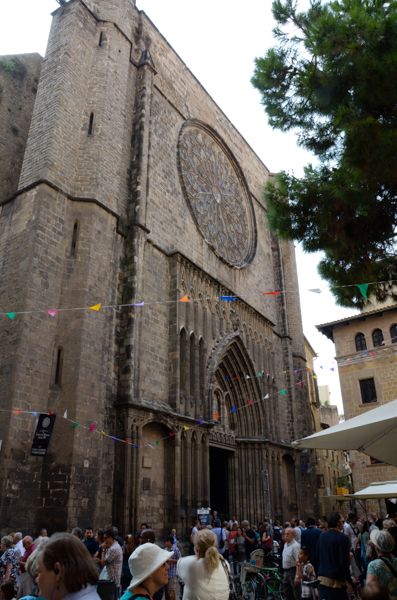 The basilica of Santa Maria del Pi, was the last of our stops in the Gothic Quarter. The current structure dates to the 14th century although it was significantly damaged during the Spanish Civil War and has been restored.

We did not go inside because of the crowds. It is a popular location for concerts.

Our guide told us that the location of the church was due to a vision about the pine trees that were located nearby, but I've forgotten the details. There is still a pine tree (a different one, of course) located in the plaza.

After our tour of the Gothic Quarter, we walked to a nearby restaurant for one of the three group meals. All the food was good, but the hot fudge sundae for dessert stands out in my memory!

After lunch, people spread out to pursue their interests. Jim and I headed for the Parc de la Ciutadella.