After the morning at La Sagrada Familia, we wanted to visit the Hospital de la Santa Creu i Sant Pau. It is in walking distance down the Avenue de Gaudí, a pleasant boulevard with eateries in the central plaza. We picked one of the cafes that seemed popular and ordered what Jim calls the worst meal we had in Barcelona. After getting the very disappointing food we belatedly observed that the rest of the patrons were limiting their orders to sangria and other potables. Oops. Oh well, we survived and had a wonderful visit at the hospital.

The hospital has an interesting history. The hospital of Santa Creu (Holy Cross) was a very old and over-crowded hospital that desperately needed replacing. There was a very rich French banker, native to Barcelona, who wanted to build a hospital dedicated to St. Paul (Sant Pau). The obvious answer: combine the two projects.

The banker, Pau Gil, provided the funding with the stipulation that the architect of the hospital work with a doctor to ensure that the result would be effective medically as well as aesthetically.

The architect chosen for the complex was Lluis Domènech i Montaner. The site was nine full blocks of the Eixample. He chose to orient the hospital at 45° to the surrounding blocks. Construction began in 1902. His design was for a "village" of above-ground pavilions connected by underground tunnels.

This is the main entrance and the administration building. 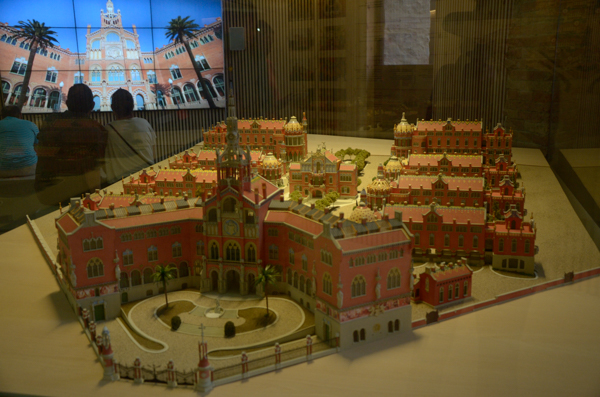 This model of the site shows the pavilions that now have UNESCO world heritage status. There are three additional buildings designed by Domènech's son that are still actively associated with the modern hospital, which occupies the other side of the site. The original hospital, much altered, was in use from 1930 to 2009, when all services were relocated to the new facility.

The individual pavilions were dedicated to specific medical specialties. Women and men were segregated: women on left side of the central axis as seen here and men on the right. The surgical facility was centrally located. 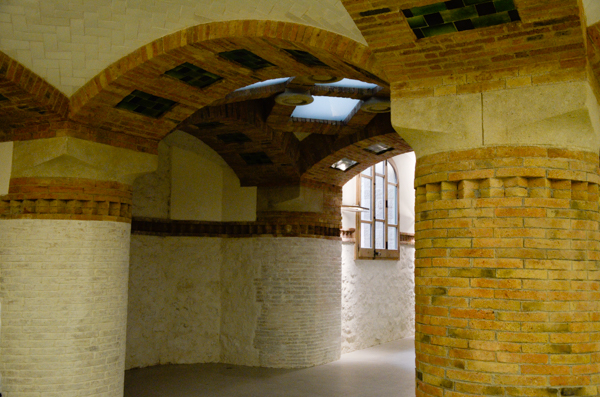 Much of the infrastructure of the hospital was below grade. This space had been the emergency room. When the new facility was opened, it took extensive renovation to remove the accretions that had been required for modern medicine.

In many places there were pictures that showed what areas looked like toward the latter days of active use. 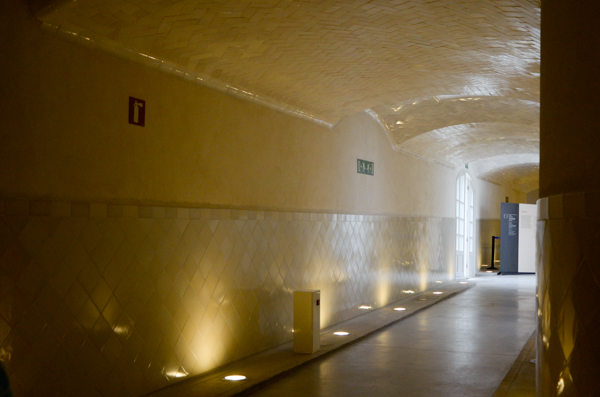 This is one of the below-grade connecting tunnels. The use of white ceramic tile made cleaning easier plus the tile reflects the daylight that enters through light wells minimizing the need for artificial light. 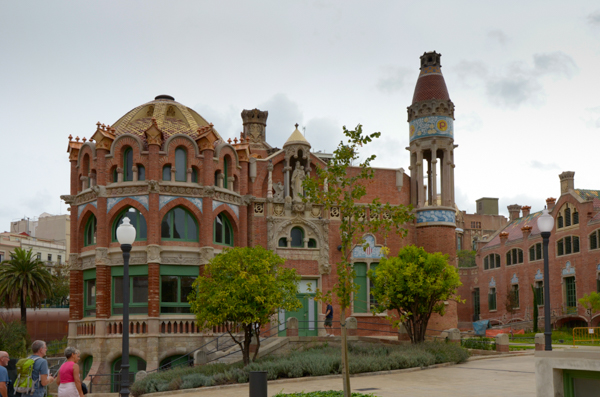 The exterior of one of the pavilions. They were all similar in overall design, but the tile decorations were unique to each building. The slender towers stored and supplied water to the individual pavilions.

The plaza was landscaped as a garden since Domènech believed that beauty was healing in itself. Plus the plants created shade and acted as windbreaks. None of the original trees has survived, but new ones have been planted. They need to grow fast because without the shade the plaza is scorching.

The surgical pavilion contained consulting and operating rooms. Names of famous Catalan surgeons were inscribed in the tile insets. 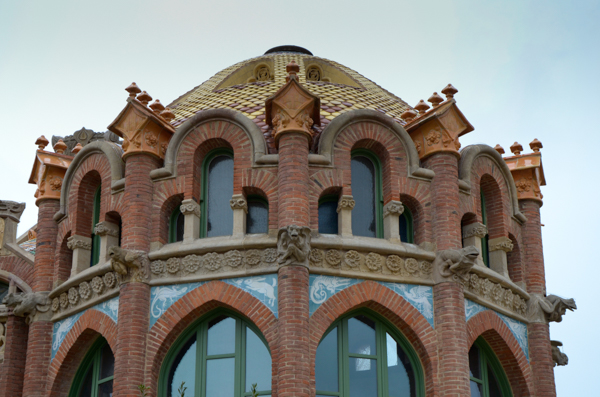 The round space at the end of the pavilions was used as a "day room" by ambulatory patients and their families. The large multi-level windows and sky lights made the rooms light and airy. The tile insets above the lower windows had animal designs. The gargoyles were all unique. 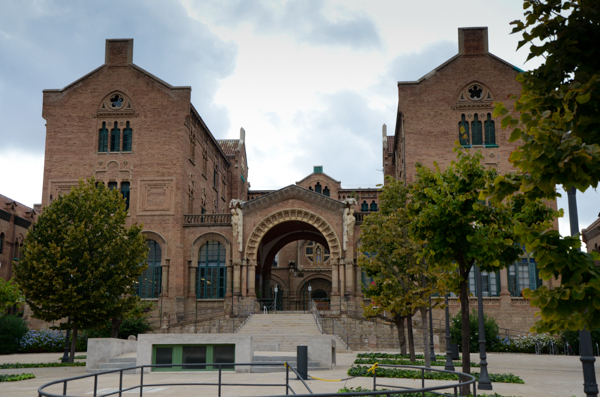 The buildings added after Domènech's death by his son, also an architect, are much plainer. In addition to Gil's original donation, other wealthy families sponsored pavilions, but eventually funding ran short and extensive ornament was omitted. They are still beautiful.

This building, which was originally a cloister for the nurses, and the ones flanking it are not part of the heritage site, but are still used to support the modern hospital. They contain labs, libraries and administration offices. 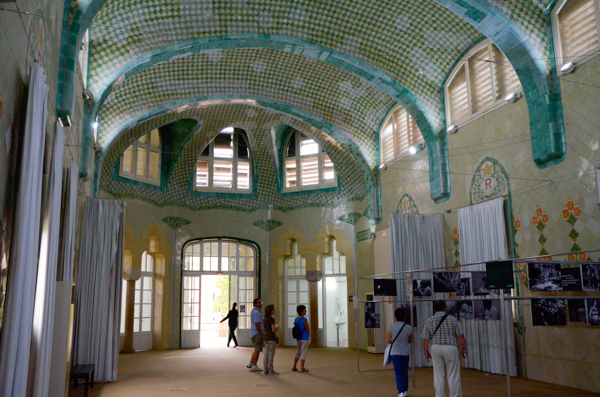 Several of the pavilions have been adapted for offices and house a variety of non-profit agencies. This one, the Sant Rafael Pavilion, is being restored to show how it would have been used as a patients' ward.

The internal decoration of the various pavilions was different, but they all had ceramic tile and muted colors.

The lighter patches on the roof mark places where the tiles are being restored. 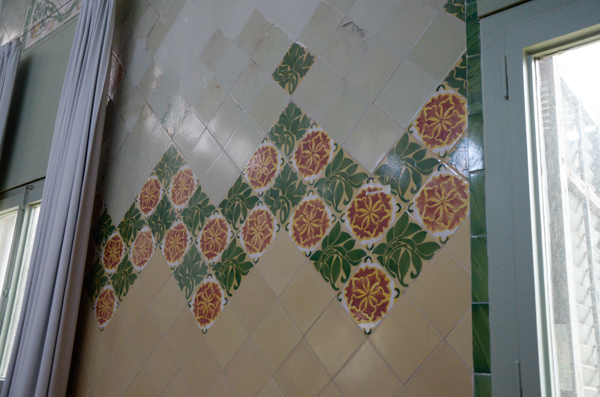 Some of the windows had been replaced with smaller ones during the hospital's active days. Our guide didn't know if they would be restored to their original size. This closeup shows some of the decorative tile, and it's also possible to see the smaller window size. 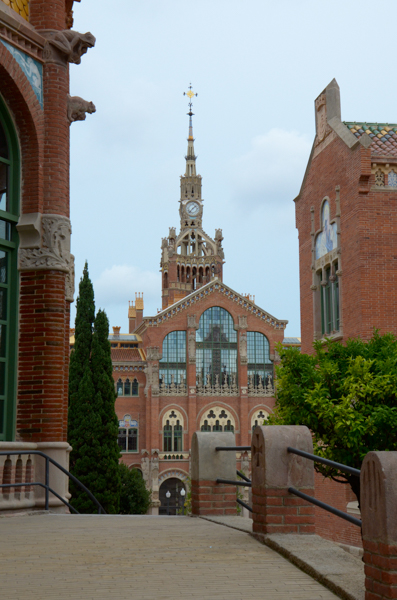 The administrative building as viewed from the entrance of the above pavilion. The surgical building is on the right. 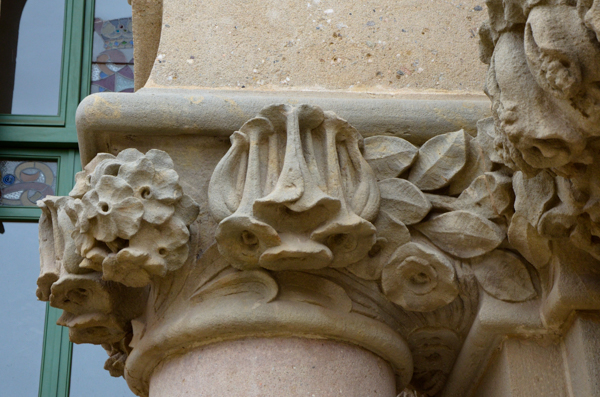 The capitals of the individual columns were unique. They all consisted of floral designs like this. 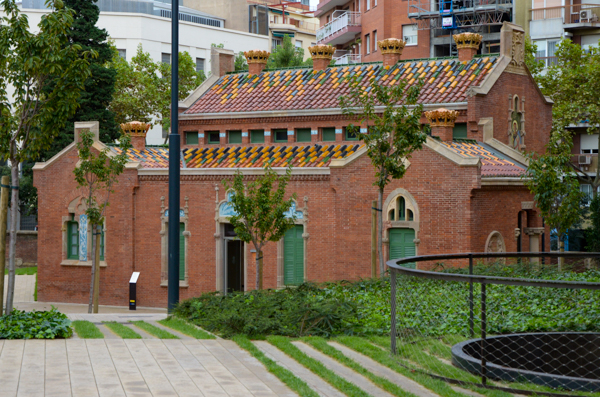 There were separate admissions facilities for women and men, this one (for men) was named for St. George (Sant Jordi in Catalan). The women's counterpart was named for a female saint, but I don't remember her name. It is currently a small museum describing the restoration of the facility.

I was fascinated by the strips of grass between the pavers.

In the early days of the hospital the gardens were used to grow medicinal plants. 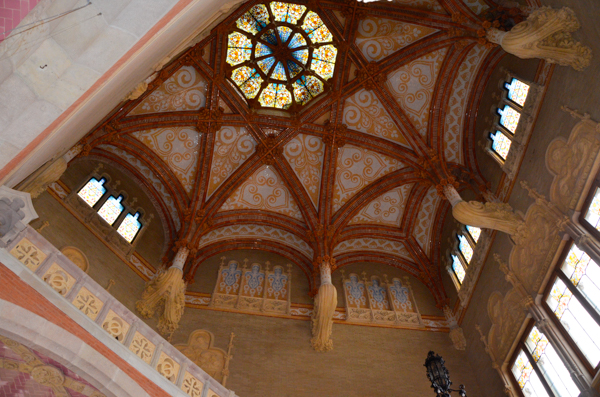 The interior of the base of the clock tower in the administration building has layers upon layers of decoration. The foliate bases of the supporting columns were fabulous. 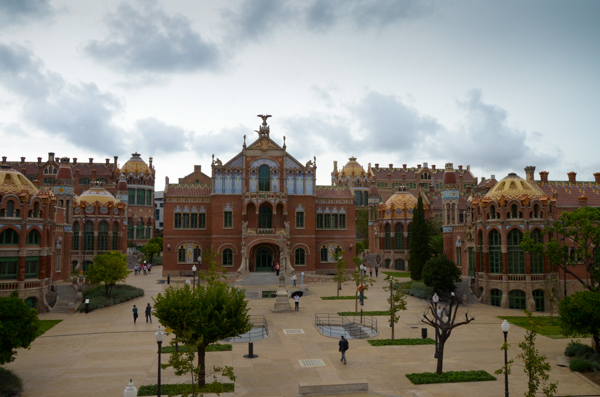 An overview of the pavilions from the administration building. 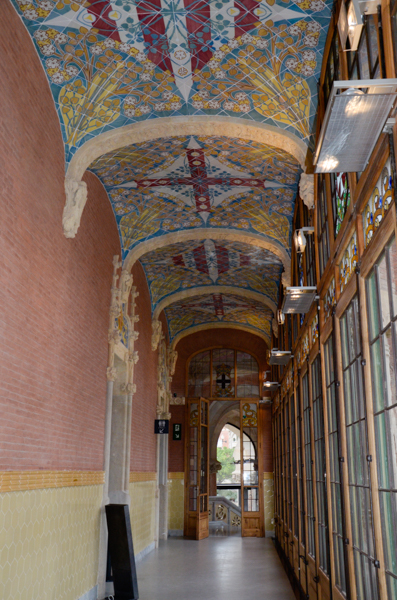 Rooms in this building are available for rent and there are also special events scheduled here. There was one large room that was set up to host a silent film later in the week. 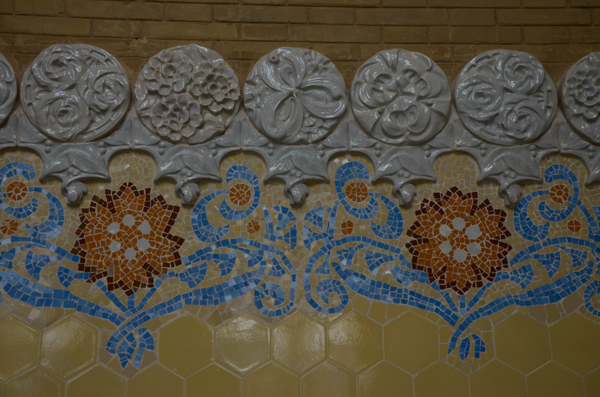 A close-up sample of the tile work.

This gallery is in the same room as the above tilework.

I can't really figure out how the room would have been used in hospital administration. It would really make a nice reception hall or ballroom. I can easily imagine a chamber orchestra in that gallery. 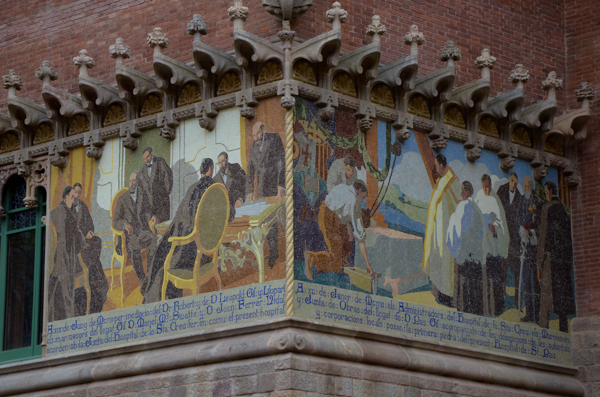 On the outside of the administration building is a mosaic mural that pictures the history of the Hospital of the Holy Cross. It culminates in these two panels. The one on the left depicts Pau Gil's executors completing the paperwork for the legacy. The one on the right depicts placing the cornerstone as work starts.