In the morning of our 4th day we gathered as a group and walked to the Passeig de Gracia metro station to catch the subway to La Sagrada Familia. On the way we had a brief survey of several modernisme buildings along Passeig de Gracia. We had been unable to visit the interior of the basilica on our previous visit to Barcelona and were eager to get inside. The name of the church means "The Holy Family" of Jesus, Mary & Joseph. 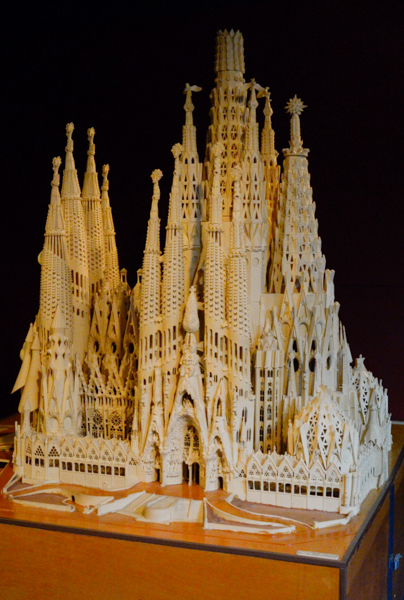 This model was in the Catalonia History Museum and gives a vision of the completed church. Gaudí worked primarily from models rather than drawings, but his models and drawings for this structure were destroyed by anarchists during the Spanish Civil War. The original model was restored (this isn't it) and continues to be used to provide a roadmap for the continuing construction.

The picture of this model is taken facing the "Nativity" facade, which was closest to being completed in Gaudí's lifetime. It is now the main entrance.

The "Glory" facade will eventually be the primary entrance. It is to the left of the picture.

The "Passion" facade is on the opposite side of the model. 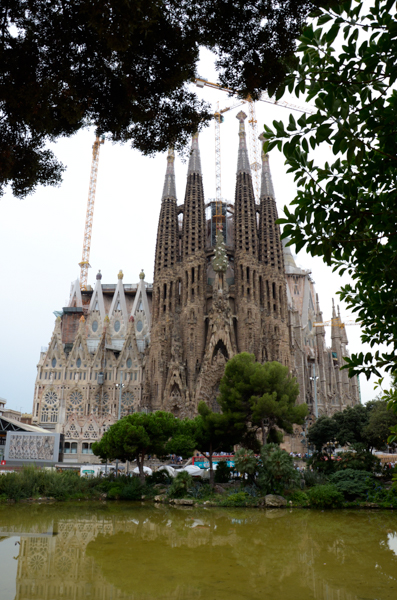 This is the Nativity facade as it appears today. Gaudí said that the medieval cathedrals, magnificent as they are, were generally so hemmed in by other structures that no one could really see them. He planned that La Sagrada Familia would not suffer that problem, so this park and reflecting pool was part of the original plan.

Unfortunately during a time when funds were low and it looked as if the church would never be completed the property opposite the Glory facade was developed. Now there is talk that those buildings will be purchased and torn down as the church nears completion.

The church has not been without its detractors over the years. I won't get into that controversy. Whatever anyone may think of its suitability or artistic merit, everyone must agree that it is an amazing building.

The three finials in the rear symbolize the communion elements: grapes for the wine and wheat for the bread. I don't know about the ones in front, which simply appear to be fruits. 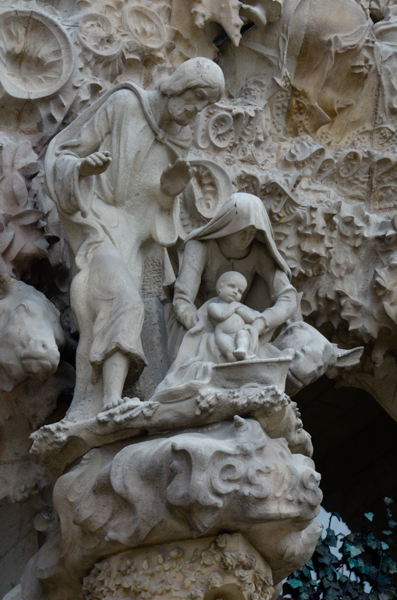 Numerous sculptures adorn the facades. The Nativity facade, as one might guess, tells the story of Jesus' birth. This is the holy family. 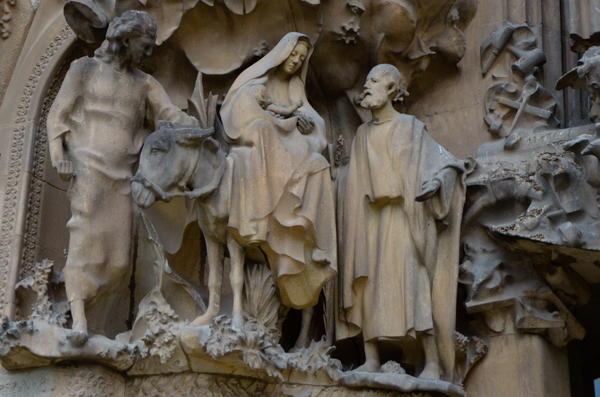 The flight into Egypt. I don't know who the second male figure might be - perhaps an angel sent to show them the way. 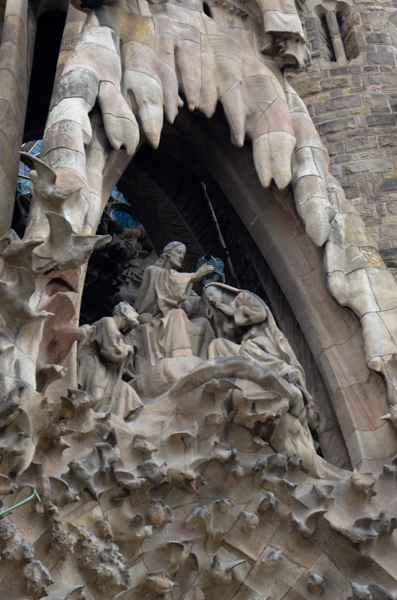 This sculpture shows the ascended Jesus crowning Mary as the Queen of Heaven while Joseph looks on in adoration.

Luisa said that the decoration shown above the arch here and elsewhere on this facade is very popular with dentists. It really does look like teeth! 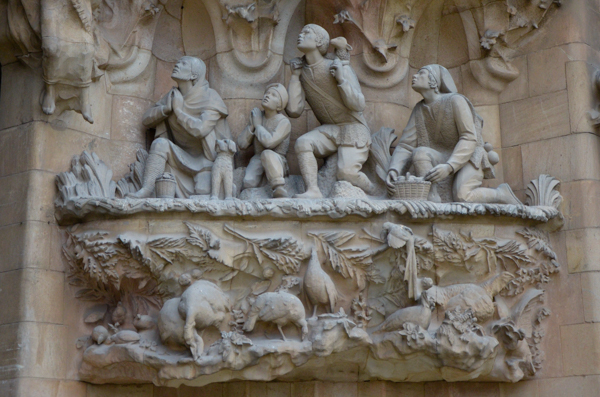 I liked this tableau of the shepherds coming to worship the baby. They are dressed in traditional Catalan clothing. The birds beneath them appear to be turkeys! Several of the birds have been damaged. The church was attacked and ransacked during the civil war and the damage may have happened at that time. I've read that some of the original sculptures were damaged and had to be replaced.

Gaudí had planned to have the entire facade polychromed. Personally I think that would really lead to sensory overload. 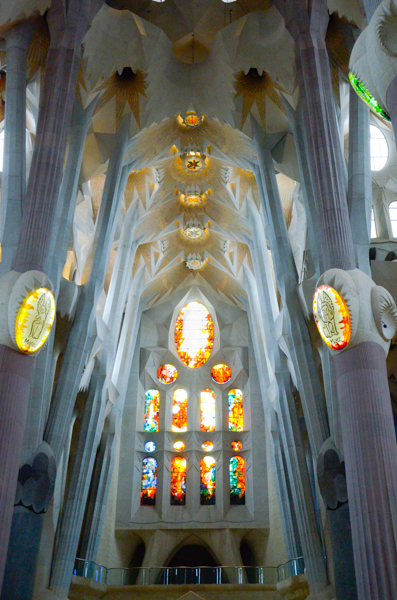 This is the sight that greets you when you enter the church. The picture doesn't show the colors at all well or the details of the stained glass, but it gives you an impression of the impact.

As in the Park Güell, none of the columns are vertical. It actually gives them greater structural stability. 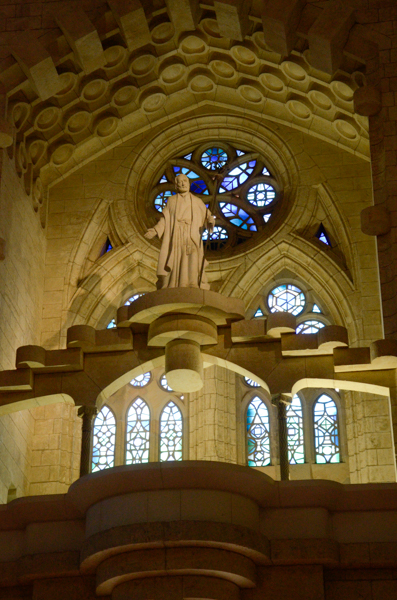 From the center of the transept, if you turn and look back toward the Nativity facade, you will see this statue of Joseph. 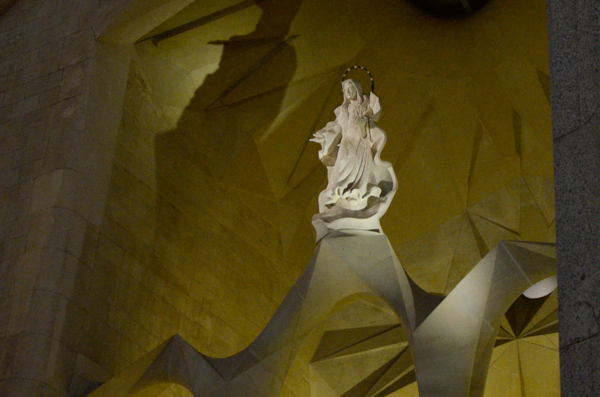 Jesus is over the altar.

I don't know the symbolism of the cover. I'm sure it signifies something.

The columns supporting the roof are not vertical, as noted above. Their tops are branched like trees. This was an effect planned by Gaudí.

I'm not posting any pictures of the stained glass windows, which are still being designed and installed. They were quite colorful but very abstract. I didn't particularly care for them. 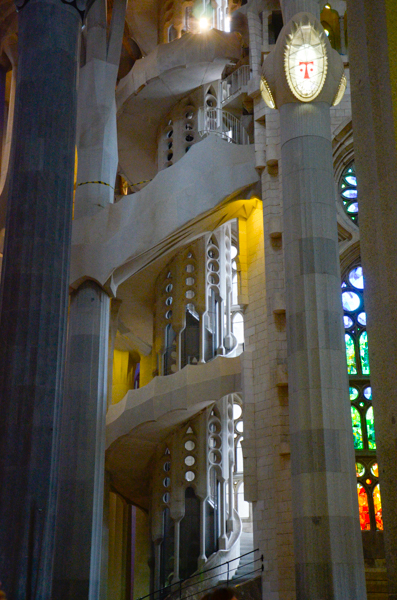 There were spiral staircases throughout with a variety of designs. This was my favorite. Whoever designed the elven villages for the Lord of the Rings trilogy must have seen these.

The Passion facade is very stark. Gaudí intended it to strike fear into the viewer and I can attest that it is unnerving.

The figure of Christ is controversial because he is shown completely naked.

The Darth Vader-esque Roman soldiers on the lower level have come in for their share of controversy as well.

The sculptures on this facade have been designed by Josep Maria Subirachs.

Judas betrays Jesus with a kiss. The snake is a nice touch. 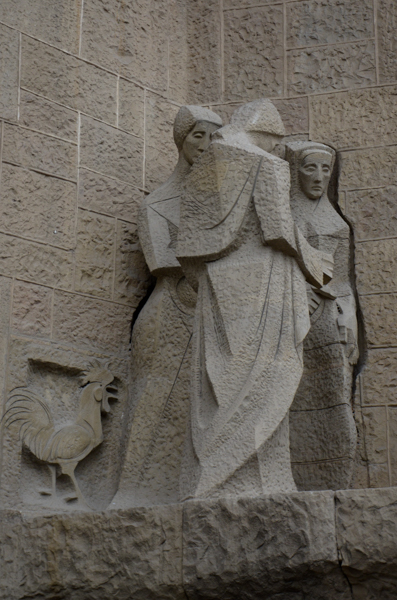 Peter's denial of Jesus is illustrated by these women, the cock, and a crouching and devastated Peter, shown below, who realizes too late what he has done in spite of his previous boasting of fidelity. 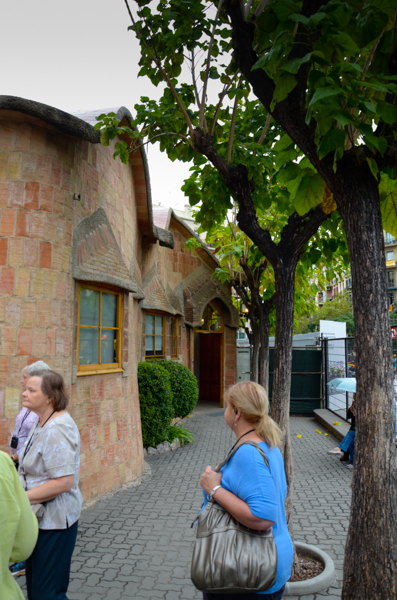 The church is a bit overwhelming.

I found this little building captivating, however. Gaudí designed it as a school for the children of his construction workers. An early example of workplace day-care!

At present it is located close to the Passion facade, where construction is still going on. It was originally somewhere else, but was moved here brick by brick. Unfortunately I didn't get any decent pictures of it.

The fascinating exterior of the roof can be best viewed at this website (opens in new tab). This interior view shows only one-half of the complex geometry of the roof and none at all of the walls, which echo Jefferson's serpentine walls at the University of Virginia and which were in turn modeled on the crinkle crankle walls in England.

Based on the pictures displayed in the little museum here the teaching was as innovative as the structure. 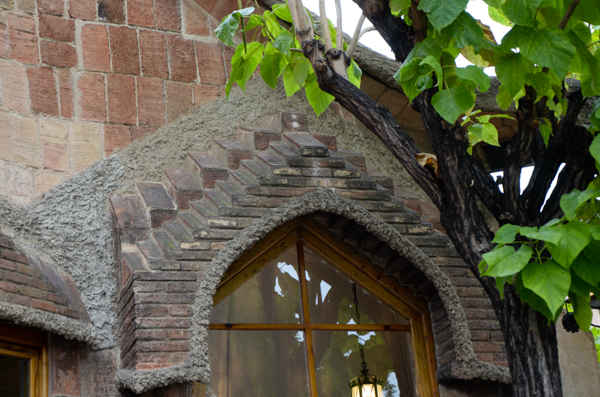 The three-dimensional pediments over the windows were fascinating and decorative. I loved the eye-tricking bricklaying technique. Had I seen this building first I might never have gotten into the church.

I wonder if Escher ever visited this school.