Our first complete day with our tour group started with a formal introduction to Barcelona public transit. Our guide Luisa handed out the transit tickets that were included with the package and gave a brief overview of how they would be used. We then crossed the street to take the city bus to our first destination, the Museu d'História de Catalunya.

This is as good a place as any to point out that although we are in Spain, Catalunya (or Catalonia) in general and Barcelona in particular considers itself as autonomous. Many citizens would prefer to be independent and have been agitating for a referendum similar to that which had recently been held in Scotland. The roots and history of this movement formed a large part of our pre-trip reading, but it is beyond what I can cover in this web site. Most of the names of places we visited are in Català (Catalan), which is widely spoken locally and is NOT a dialect of Spanish; it is as much a different language as Portuguese or Italian. It is more closely related to Occitan. Can't cover all the background of this either.

Since our trip (I'm updating this album in 2017) there has actually been a recent referendum that voted for secession. The Spanish government isn't buying it and has recently taken direct control of the region. 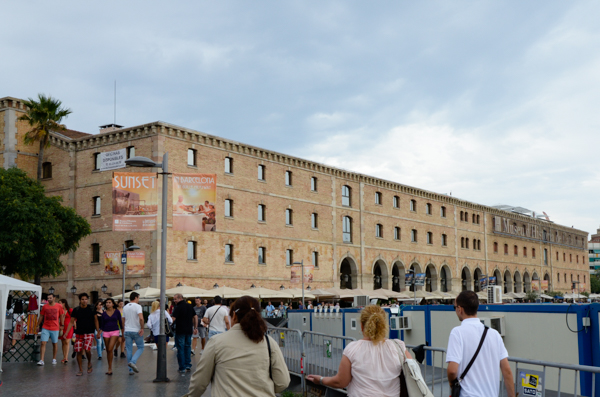 The museum is located near the docks in this former warehouse. We started our visit with a lecture by one of our "subject-matter experts," Silvia Riera. We were treated to several lectures and tours by Silvia and they were all informative and engaging. 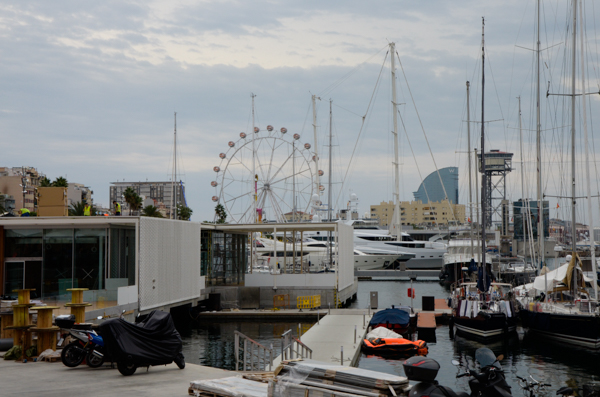 Nearby is the neighborhood called Barceloneta, once the home of dock workers, but now an increasingly trendy address.

At one time the seaside areas of Barcelona had been dedicated to shipping and industry. In the latter part of the 20th century, the local government used the 1992 Olympic preparations to convert the area to residential and commercial pursuits.

The adjacent docks are now the home of many pleasure craft. There is a nearby amusement park. 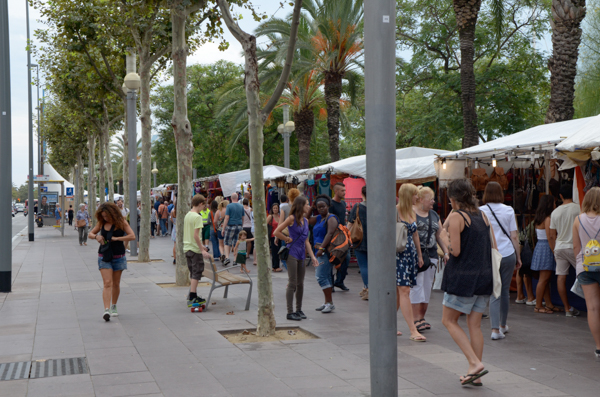 The museum was surrounded by craft stalls. I believe that the number and variety was increased by the La Mercè festival. I was able to find a pretty, hand-painted fan at an outrageous price, which came in handy for the unseasonably warm weather. 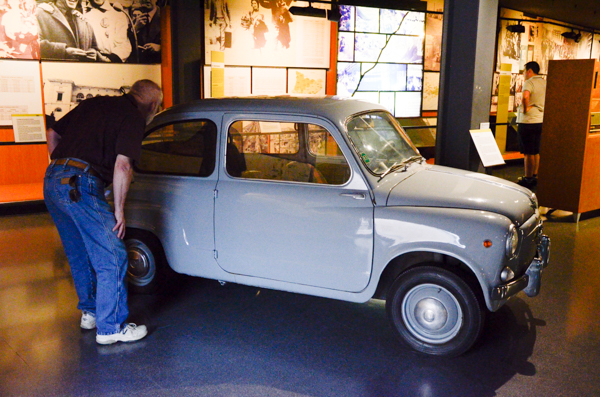 I'll use other pictures from the museum (mostly models) elsewhere, but Jim was captivated by this old Seat (that's pronounced SEE-at). The SCCA road-racing car of his youth was the Fiat 600, which was the sister-model of this one. Seat was in partnership with Fiat from the time it was established in the 1950s up into the 1980s.

His comment: it's even smaller than I remembered! His buddies used to call the car a "pregnant rollerskate."

It was a fabulous museum and many of our group returned to spend more time there. 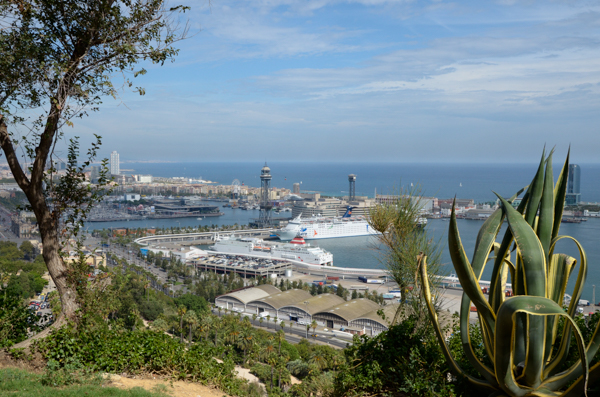 After lunch we had a orientation tour of the city. It included a brief stop at the overlook on Montjuïc. This view is over the cruise ship docks back toward the Barceloneta area we had just visited.

Barcelona has the largest cruise ship port on the Mediterranean. 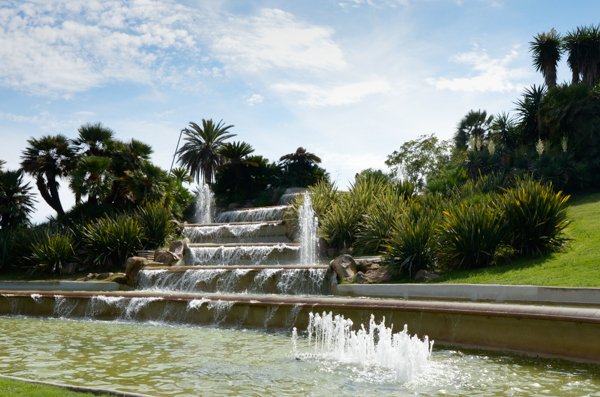 One of the many lovely fountains located on Montjuïc.

After our stop we made a brief visit to La Sagrada Familia, but we spent an entire morning there later in the week, so I won't include anything here. 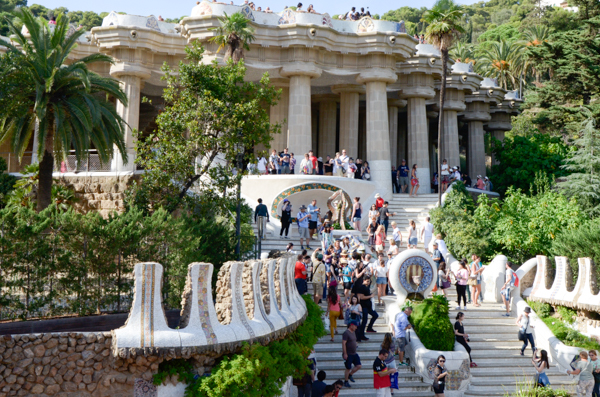 Our next stop was the Park Güell. Although we actually came through the "tour bus" entry, I'm showing the pictures as if we were coming through the main entry.

The park had been planned as a high-end housing development by Gaudí's patron Eusebi Güell (pronounced more-or-less like WELL). There were numerous home sites surveyed and some major works actually constructed, but it wasn't a successful investment. Eventually the land and structures were turned over the city as a public park.

Much of it is free to the public, but the "monumental zone" that is shown here requires a timed ticket.

These steps ascend from the gate to the "hypostyle room."

The entry to the park is flanked by two porters' lodges. This is the smaller one. There was a large waiting room for the guests who would be visiting residents of the estate. Naturally it's now a gift shop.

The grotto I'm standing in as I take this picture was the waiting room for their horses. 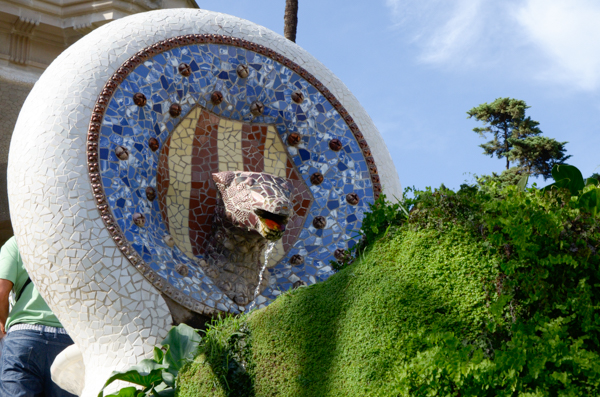 This fountain contains the shield of Catalonia. The red and yellow shield surrounds an animal's head. Some references say it is a dragon, but it doesn't look very dragon-ish to me. Others call it snake, but it looks even less like a snake (a snake with ears??).

The fountains in the stairway are fed by a cistern under the hypostyle that is filled via a clever water-collection system designed into the plaza. 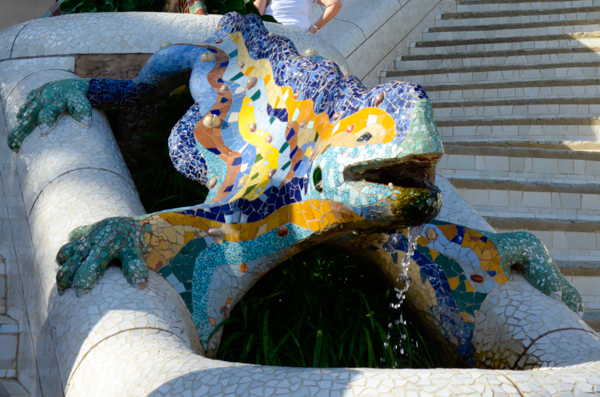 The fountain farther up the staircase is the iconic trencadis dragon fountain. The dragon had been severely damaged by a vandal some years back and has been restored.

If you're patient enough, you too can get a picture without anyone posing by the fountain. 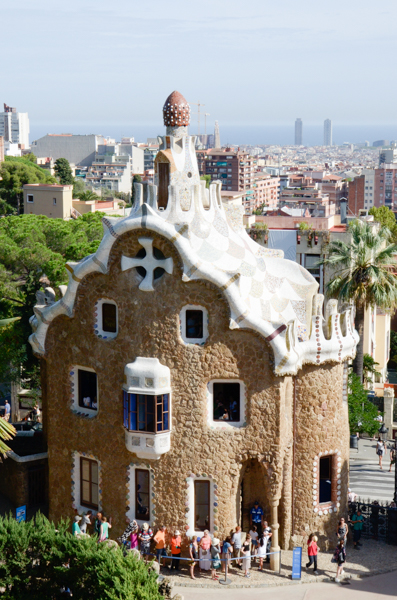 This is the other gatekeeper's lodge. It is currently a museum. The line was long and we ran out of time to visit it.

The columns supporting the plaza are monumental and not exactly vertical. Gaudí was not fond of right angles.

The plan was for the space under the plaza (hypostyle room) to be used for a farmer's market for the residents of the development. It is uniformly cool so the produce and other goods would be kept fresh.

Hypostyle is an architectural term meaning a roof resting on many columns. 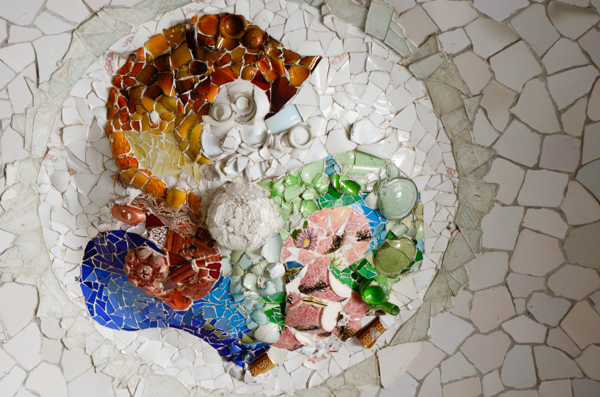 The ceiling of the hypostyle room was decorated with many mosaic medallions, all different.

The medallions and the undulating bench on the plaza above the room were designed by Gaudí's assistant Josep Maria Jujol. 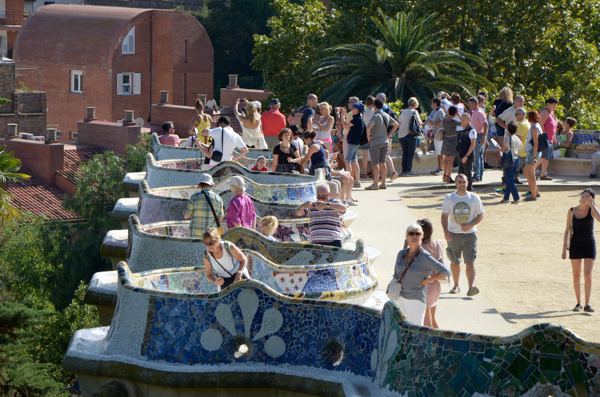 The "Teatre Grec" located above the hypostyle room was intended for open-air shows and other gatherings. The tiled bench is a wonderful place to hang out and catch some rays. 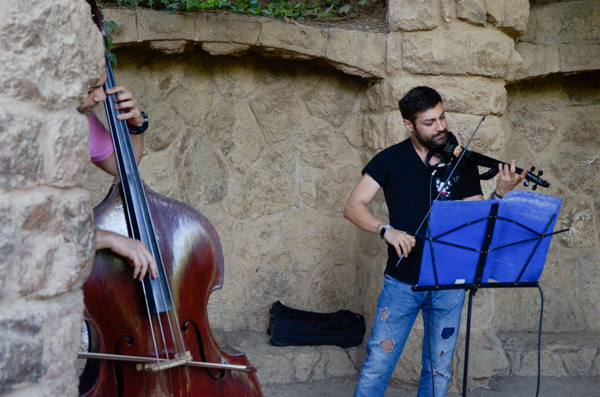 Everywhere in the city musicians were entertaining the crowds. Perhaps there were more of them because of the festival, but I remember that street musicians were common when we visited before in the winter.

This violinist at Park Güell was really playing well. I wish we could have spent more time listening to him. His electronic fiddle had a haunting timbre. 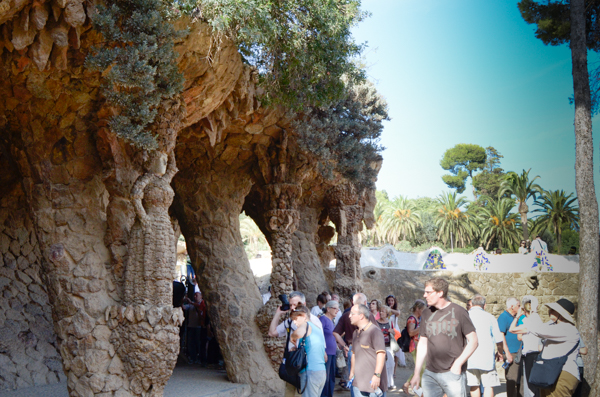 This ramp leading down from the plaza features a caryatid that clearly represents a washerwoman. Above it is a roadway leading to the upper portion of the estate. 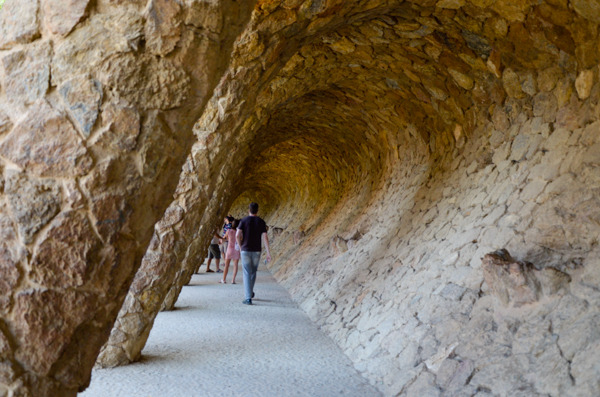 The interior walkway of the portico shown above has the shape of a breaking wave. Gaudí was a student of nature and used natural forms whenever possible.

The "sconces" on the right provide a place for lighting the walkway.

After a too-short time spent at Park Güell, we were back on the bus to return to the hotel.

That evening's happy hour featured a visit by a local couple (an IT manager and a chef) who discussed life in the city. They were charming and informative. A couple of us asked Luisa if we could set up a cooking lesson with the chef. She tried but was ultimately unable to coordinate schedules. That's what we've come to expect of Road Scholar guides, though. They go above and beyond! That evening we joined another couple to try one of the restaurants that Luisa had recommended. It was a great evening.