On our first full day in Barcelona we awoke early. REALLY early! I rolled over and looked at the clock and gasped that it was almost 10:00. The light was shining in our window. Panicked that we would miss breakfast we dressed in a hurry and ran down to the breakfast room to find it clean and empty. It wasn't 10:00am; it was 10:00pm! We had been asleep only a couple of hours. The bright "sunlight" was a floodlight that illuminated the light well outside our window. Back to bed!

The next morning we had no problem making breakfast. After eating we headed out on the town. When in Barcelona before we had driven by the cemetery on Montjuic several times. Since I'm a fan of cemeteries and since this is supposed to be almost on a par with Pere Lachaise in Paris, I really wanted to see it. The Barcelona city map seemed to indicate we could get there from the top of the Montjuic funicular. Unfortunately that was not the case. The cemetery will have to wait until another trip. 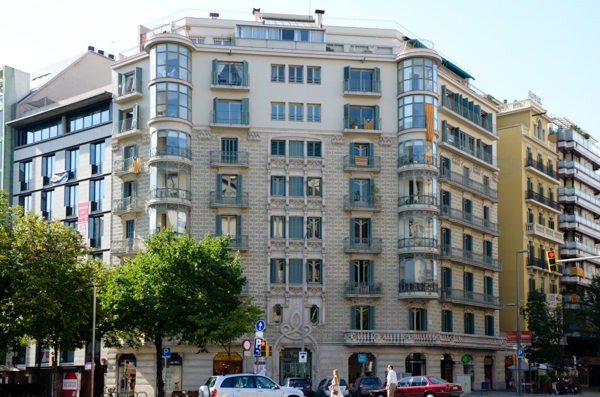 The city plan of the Eixample had the buildings on every block champfered at the intersections. This was originally to make the corners easier to negotiate for horses and carriages. The design was controversial at the time and was eventually not implemented according to the desires of the planner, but it makes for a unique street-scape.

Plus it allows ample space for parking scooters!

This building shows how developers build "up" by adding additional floors to an existing structure. The top three floors are not original.

The bus, train and subway system is integrated so a single ticket can be used on them all. We were able to walk to the local subway station, ride a few stops and connect to the Montjuïc funicular. There is a cable car at the top of the funicular (costs extra) that goes up to the top of the mountain, but we had seen that on our first visit so it wasn't on the itinerary this trip. 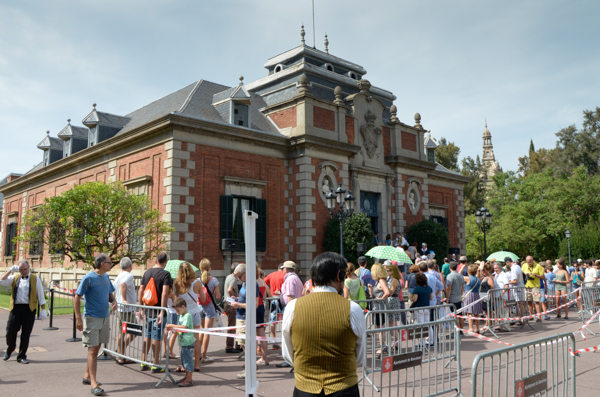 It was a blistering hot day and it didn't look like we would be able to get to the cemetery, so we decided to visit the many gardens located on Montjuïc.

Completely by accident we happened on what turned out to be the high point of our trip. As part of the La Mercè festival, there was a huge celebration. This is the Palauet Albéniz, which is rarely open to the public. It was constructed as a royal residence for the 1929 International Exposition.

We didn't brave the long line to go in although the interior is said to be very beautiful. 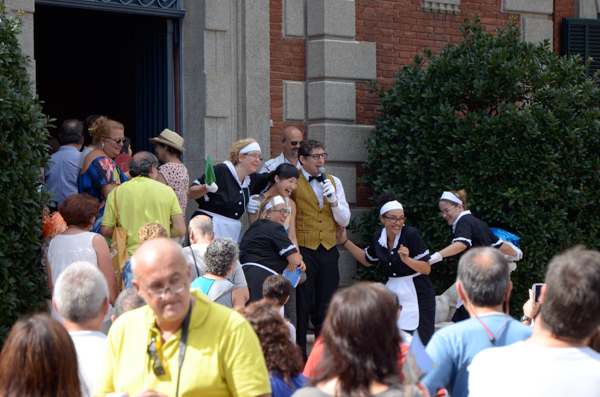 There were professional entertainers to keep the waiting crowds happy. It was their music and patter that had drawn us into the park.

After the 1929 exposition closed there was a plan to make the building the site of a Municipal Music Pavilion, which is why the building is now named for Isaac Albéniz, the composer. This project never reached fruition.

Near the palace there was a sardana competition. The link has more info that you ever wanted to know, but this is a traditional and very popular Catalonian dance. 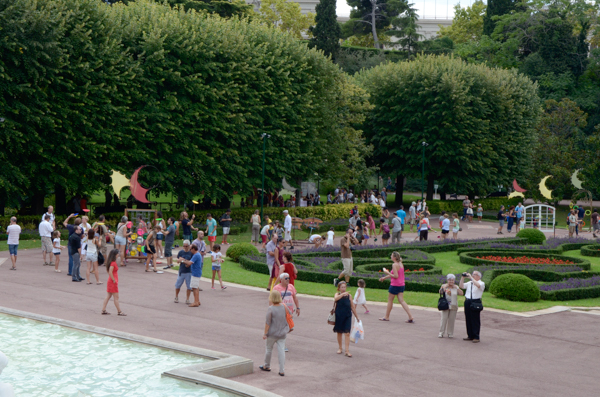 The adjacent formal gardens were overrun with families and children engaging in a variety of circus-related activities such as juggling, puppet shows, snacking, etc. 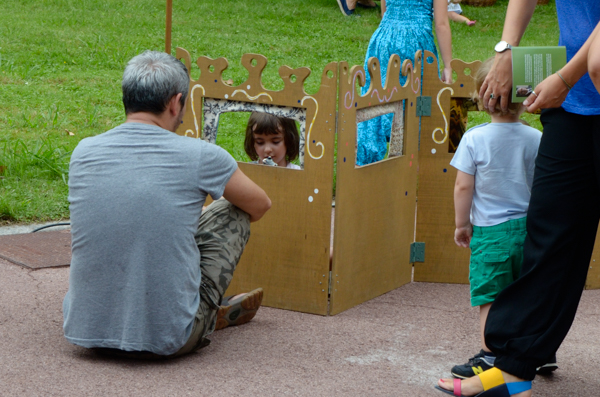 Unlike what we would typically see in the US, the children weren't WATCHING the show, they WERE the show.

It was a celebration of imagination as children at the various venues put on their own improvised productions for their parents. 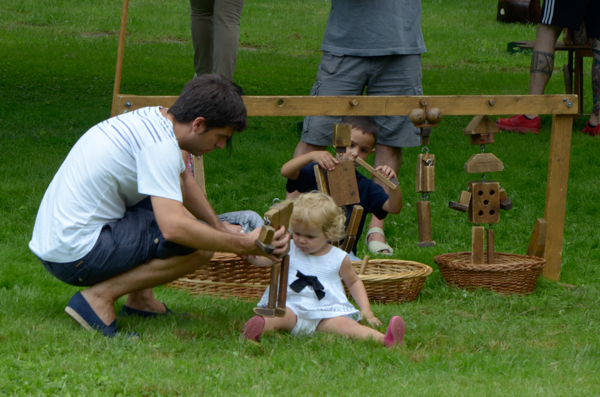 Sturdy marionettes were available as props. 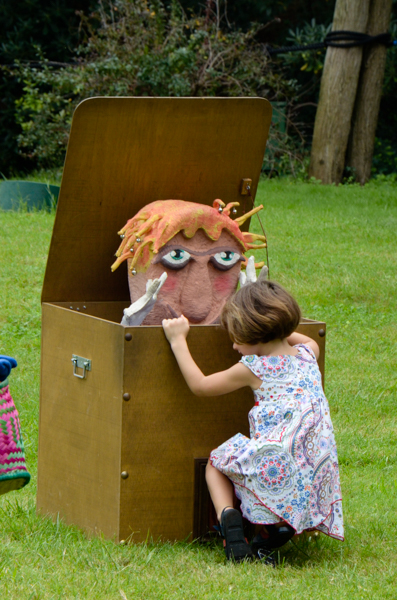 This youngster has discovered how to make the Jack-in-the-Box come out. It has taken all her weight on the lever to open the box. We watched in trepidation hoping that she would remove her hands before letting the lid crash down. She didn't. But instead of dissolving in tears and running to Mama she simply rubbed her bruised fingers and got back to work opening the box again.

Thereafter, however, she was VERY careful to make sure that her hands didn't get caught! 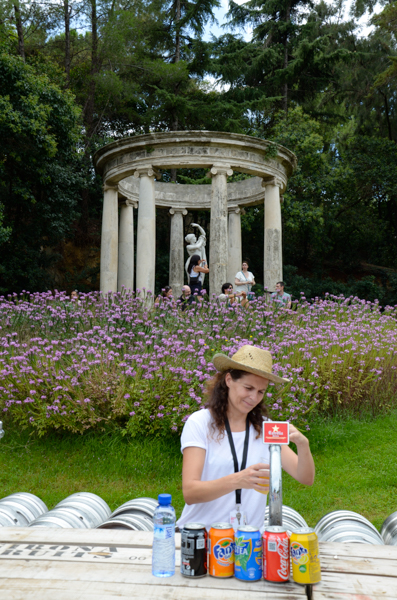 It was a hot day and Jim was thrilled to see that the soda vendor also offered draft beer. Estrella was the local beer of choice.

Based on the number of kegs, they were expecting to sell a lot! 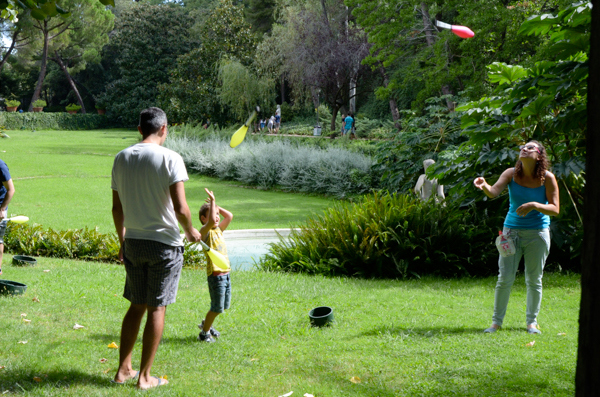 There were lots of things to juggle. Indian clubs (they appeared to be very lightweight), rings, beanbags and plates on tall poles.

The adults seemed to be having as much fun as the children.

There was one little girl after my own heart. She would throw something up, close her eyes, and duck. 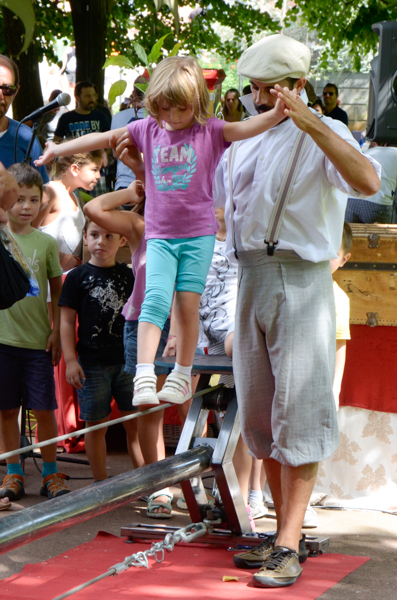 An extremely popular activity was tightrope walking with a long line of aspiring acrobats. 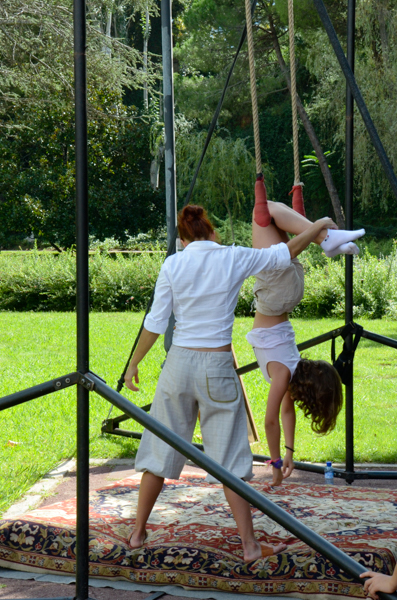 Budding trapeze artists also had their opportunity for thrills and (properly padded) spills. 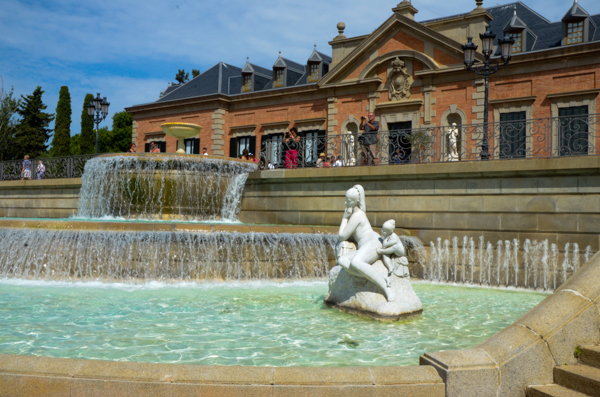 The gardens were very beautiful with many lovely sculptures and fountains, but they couldn't compete with the people. 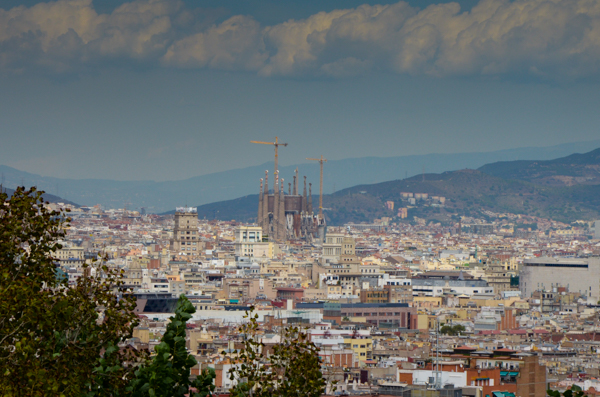 We had lunch at a hot dog stand overlooking the city. The view was spectacular. The food, not so much.

La Sagrada Familia dominates the city as seen from this location.

This little dive had a restroom with a remote-controlled door. It was normally locked, but a customer could ask and the workers would punch a button and the door would magically open. I think non-customers could pay to use the facilities as well. 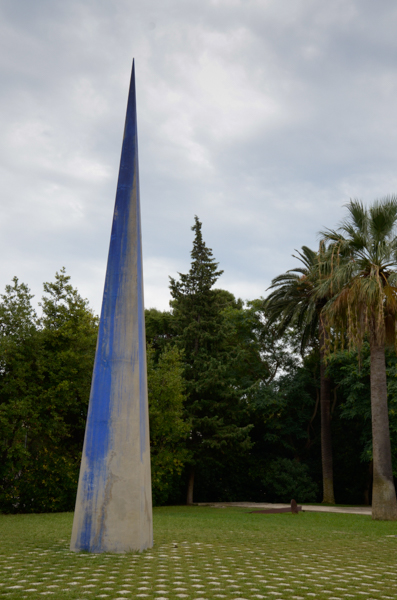 We did not visit the Joan Miró Foundation exhibits, but the small adjacent garden had a number of sculptures. 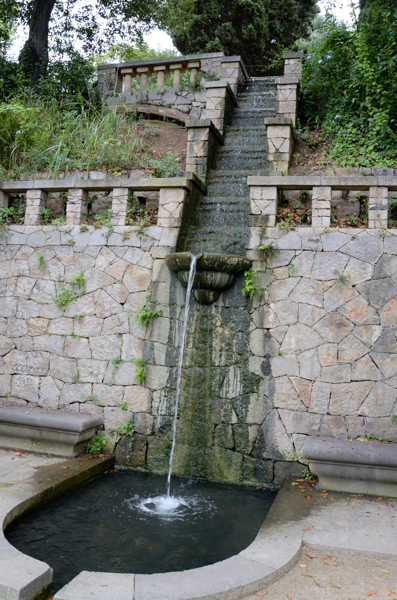 The Laribal Gardens had numerous fountains. We didn't have nearly enough time to spend here (or energy to climb up & down the terraces). 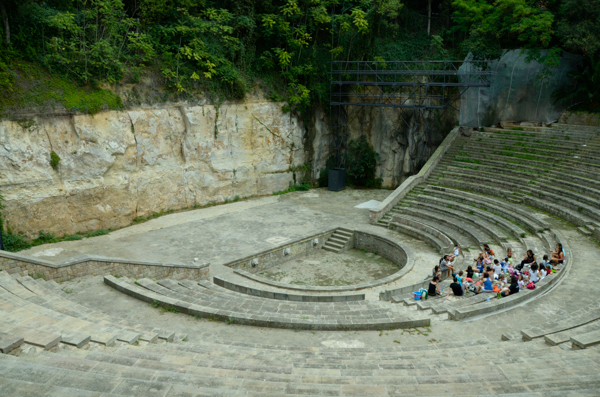 A former stone quarry that was turned into a "Greek Theatre" for the 1929 Exposition is the major site of the Grec Festival of Barcelona. During that time this venue is jammed. Today it was just a picnic site for a couple of school groups. 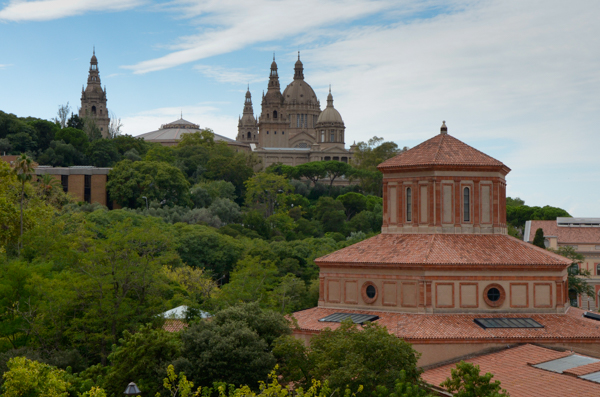 Looking back from the terrace by the Greek Theatre toward the Museum of the Art of Catalunya (with the dome and towers). This was another building constructed for the 1929 exposition that has been saved and repurposed. If we ever get back to Barcelona, it will be on the list of places to see. 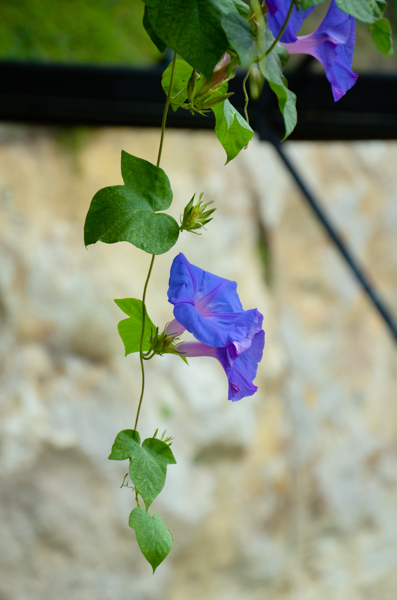 I've learned to hate morning glories in my own garden, but these enormous and intense blue flowers were very common in Barcelona and I couldn't resist a picture. 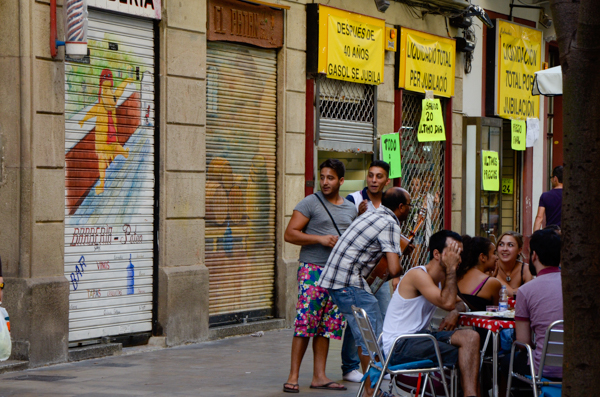 We elected to walk back to the subway station at the base of Montjuïc. It was a somewhat seedy but vibrant neighborhood. These street musicians were singing for tips, but weren't getting any takers.

We were dismayed to meet three American women in the subway who had almost (?) been the victims of a mugging. A gang had surrounded them and tried to take their purses, but a young local woman had apparently scared the gang away. Unfortunately, the woman was somewhat questionable herself and it appeared as if she might be in cahoots with the gang. We fetched one of the security police to assist them, but our train came before everything was resolved so we don't know how it worked out.

That evening we met our guide and the rest of our group. After a "welcome" presentation we all walked to a nearby restaurant for one of our three group meals. I confess that I was so drowsy by this time that I don't remember a thing about it! At least we slept through the night afterwards.