Mysteries of the Far North
Tromsø

Our trip has reached its final day. Even though it was fabulous, I can't say that we were sorry. Our bags were packed and we were ready to go. We had a morning tour of the city before heading to the airport for our flight to Oslo. We would spend the night there before leaving the next morning. 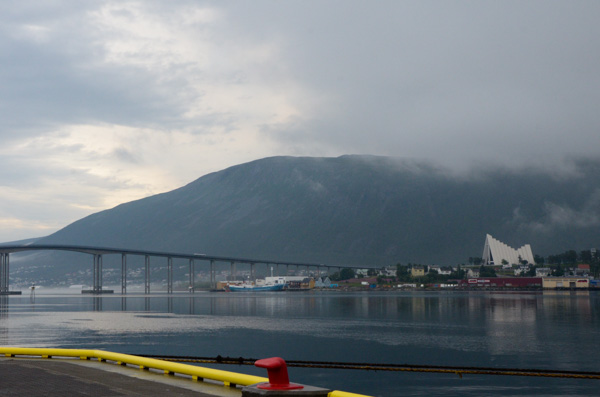 The view from our mooring. It looked like we were going to experience some of the foggy, cold and rainy Arctic weather that we had expected all along. As it happened, however, there was only enough fog to make it seem "atmospheric."

The white angular building to the right is the Cathedral of the North. We would visit it later. The bridge connects Tromsø, which is located on an island, with the mainland. 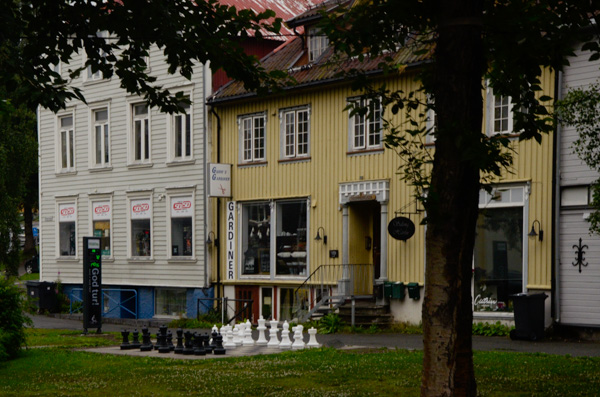 We were in town for the Tromsø Chess Olympiad. Chess is recognized by the International Olympic Committee and that there was once an effort to include it in the Olympic games. That hasn't happened, but the Chess Olympiad was established in 1924 and has been held biennially since 1950.

This large outdoor chess set looks permanent. I don't think it was installed just for the event. 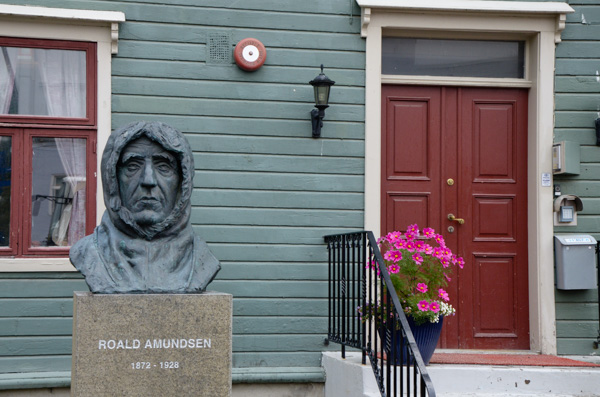 One of our stops was the Polar Museum. Outside the entrance was this bust of Amundsen. Ever since we traveled to Antarctica in 2008 and I read his account of reaching the South Pole, he has been one of my heroes. The British explorers Shackleton and Scott seem to get more positive press, but Amundsen's success was due to pure professionalism. He simply did a better job.

He was killed in an air crash near Tromsø in 1928 while attempting a rescue of other explorers marooned on the pack ice. 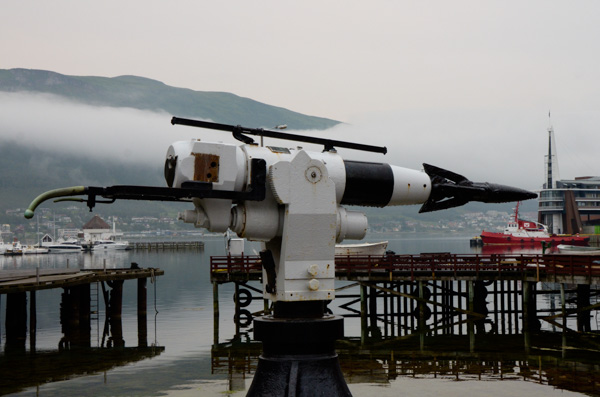 One of the exhibits at the Polar Museum is a harpoon gun. Norway was and is a major whaling nation and has contributed to the decline of the great whales. It continues commercial whaling today in spite of a moratorium on whaling imposed by the International Whaling Commission. 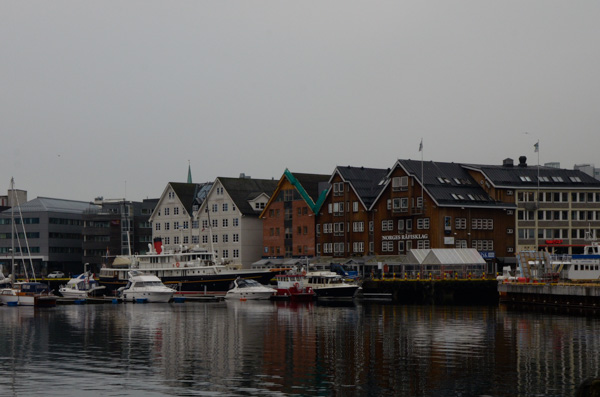 The harbor opposite the Polar Museum. 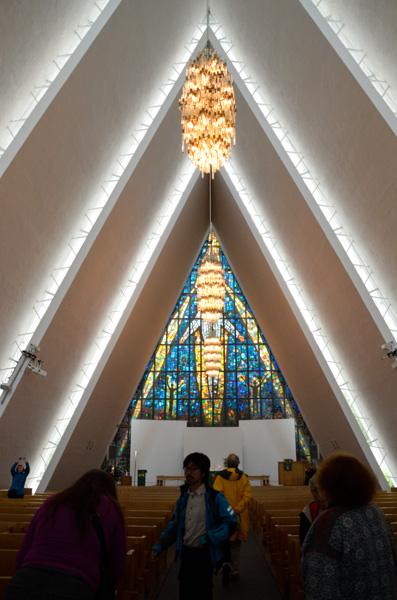 Although it is commonly called the Arctic Cathedral, it isn't a cathedral but a parish church. 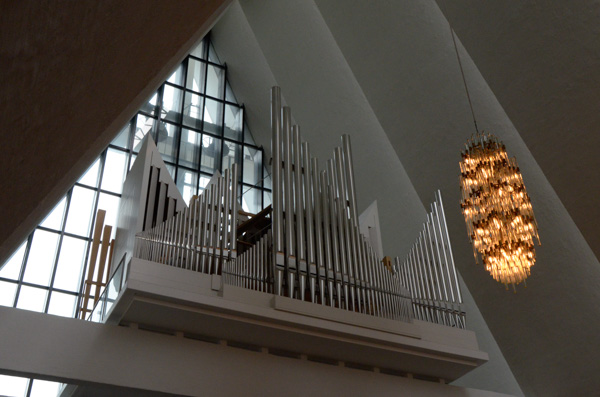 The church features a notable organ. 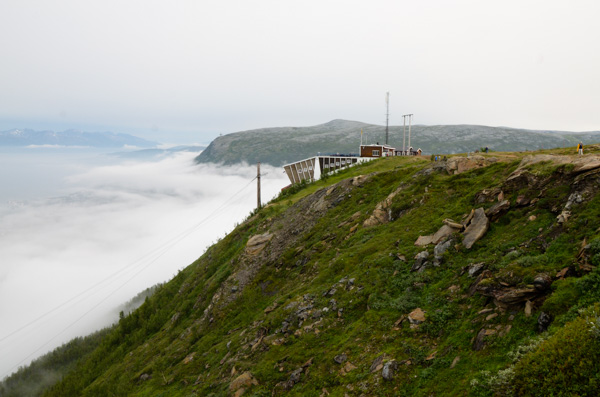 After visiting the church we took at cable car to Mount Storsteinen. We had lunch there, but first there was time to explore.

Dizzying cliffs overlooked the city. I didn't even get close to the guardrails -- where there were any. 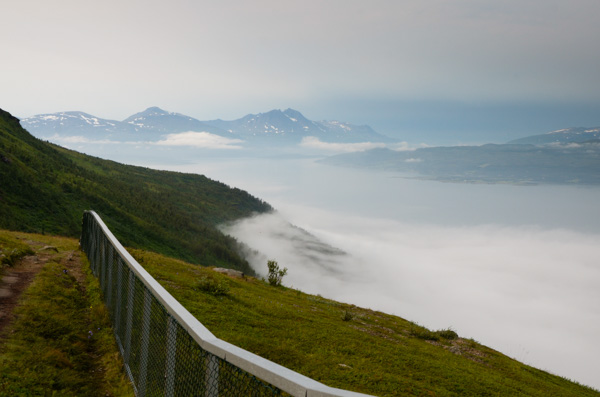 The fog moving through just added to the beauty.

As usual, the rather plain-looking vegetation was a carpet of tiny wildflowers.

After lunch there was time to sit on the deck and enjoy the view and a beer. 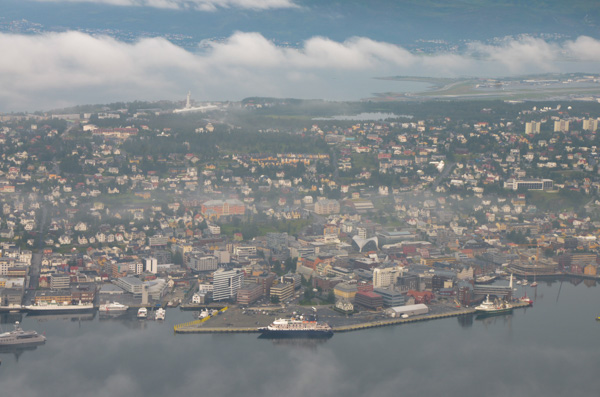 The staff at the Island Sky, shown docked down below, was busy preparing for the next set of guests who would be traveling down the Norwegian coast. But we were headed to the airport, which can just be seen at the upper right of the picture, for our trip to Oslo for the night.

Our trip home wasn't exactly uneventful. Lufthansa managed to mislay my suitcase. Then we discovered that the car battery was dead. No matter. After spending the night in Chantilly (it got DARK!) and getting the car jumped in the morning, we made it home safely and my suitcase arrived a few days later. 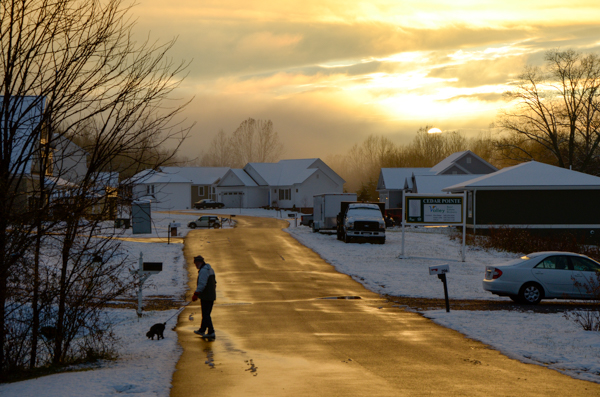 Our neighborhood may be homely but it is home. Jim is walking our little dog Hoppy after an early pre-Thanksgiving snowfall. The sunset is pretty special.

Sunrise can be pretty nice too. This was the view from our back deck a few days ago.