After Kirkenes we continued to the northwest. Our destination was (more-or-less) the northern-most point of Europe. 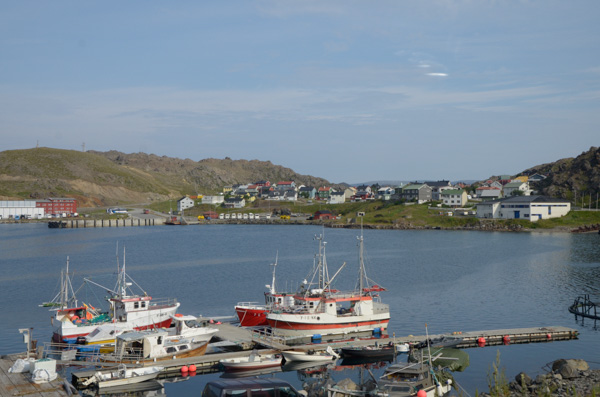 The next morning found us in Honningsvåg, the port of call for Nordkapp, the northern cape of Europe.

Technically, Nordkapp is on the island of Magerøya and therefore not really part of mainline Europe, but why get technical?

Our guide said that local gardeners have actually nurtured some trees that would not normally survive the weather. 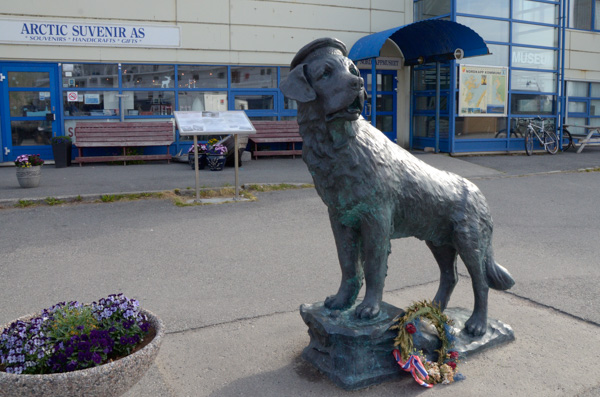 One of the first sights that greeted us was this memorial to Bamse, a St. Bernard that became the mascot and symbol of the Free Norwegian Forces during WWII.

Norway was conquered by the Nazis early in the war. The legitimate government fled to London and Nazi sympathizers established a puppet government. It gave the language a new word: quisling, after the leader of the collaborationist government, Vidkun Quisling, who was executed for treason after the war. 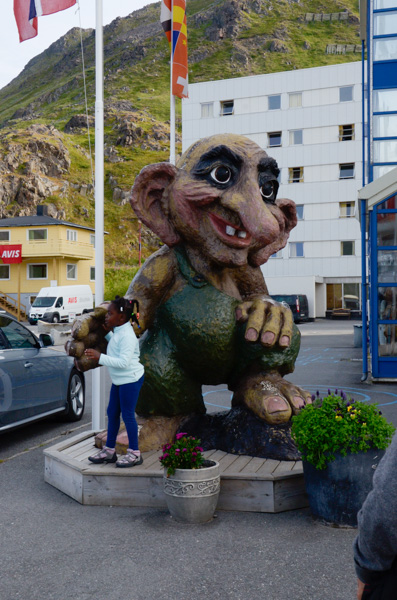 We also saw the first of many trolls.

The little girl and her family were on the same itinerary. We saw them in Nordkapp. 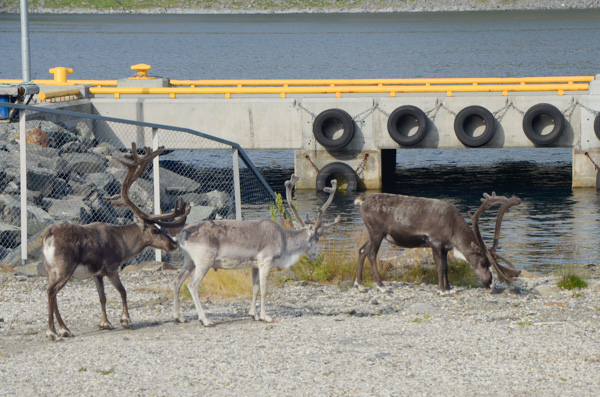 Reindeer are as pesky in Norway as white tails here at home. This trio were prowling around the harbor area. 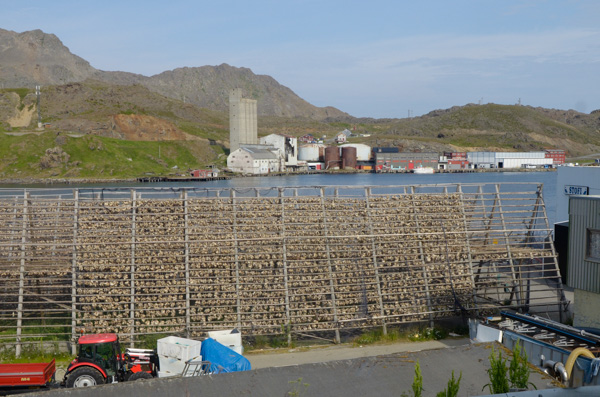 Russian villagers dried fish on clotheslines. The Norwegians do it wholesale. 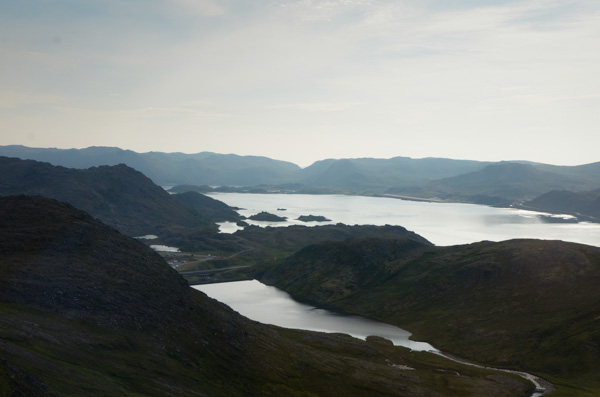 As the bus climbed into the mountains north of the town, we enjoyed the beautiful views. This reservoir supplies the town with fresh water. 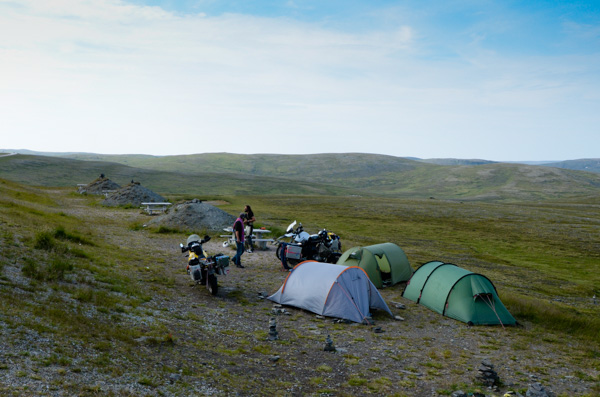 We stopped for a break near this campsite. Our guide told us that Norwegian law allows camping just about anywhere. She said that even if a camper wanted to set up in the king's front yard it would be legal (although strongly discouraged!).

The stone cairns in front of the tents are used for markers, either for popular camping sites or hiking trails. 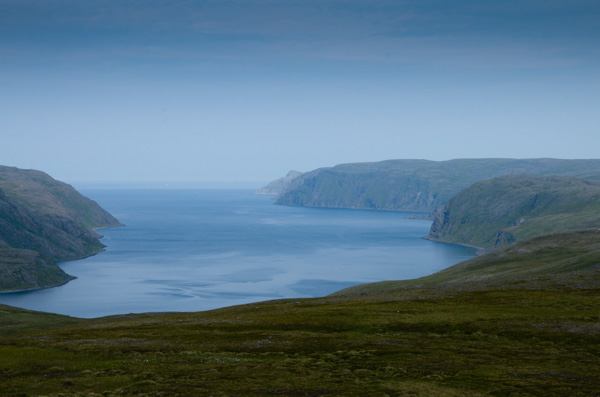 The campers had a beautiful view of this Barents Sea inlet. 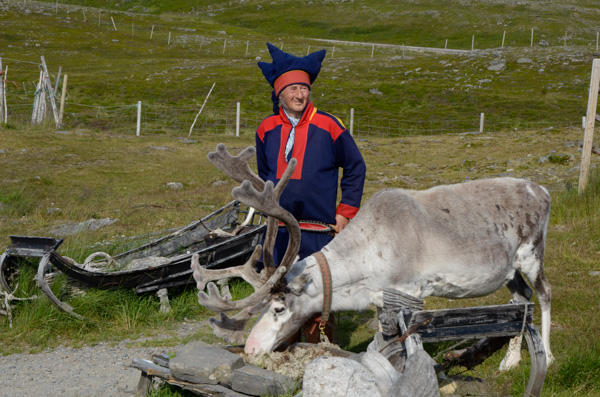 Somewhat later we stopped at a Saami encampment. This family has a thriving summer job with the tourist trade, but they are the real deal. 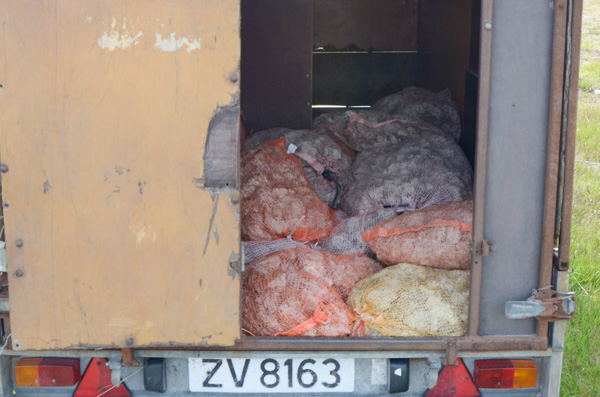 Reindeer eat lichen like the one shown above munching out of a manger. There didn't appear to be any lichen in the area. I scouted around a bit and found this trailer full of packaged "reindeer chow." 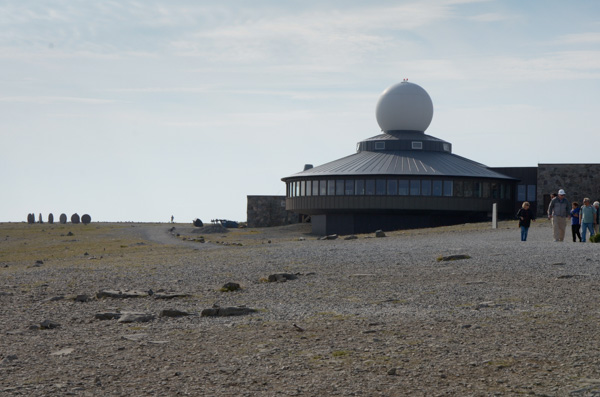 We have reached Nordkapp, our destination, and its visitors' center.

One of the couples in our group had traveled here many years ago when they were youngsters just out of college. They said it was much more built up now. At the time they were camping out of a VW van. 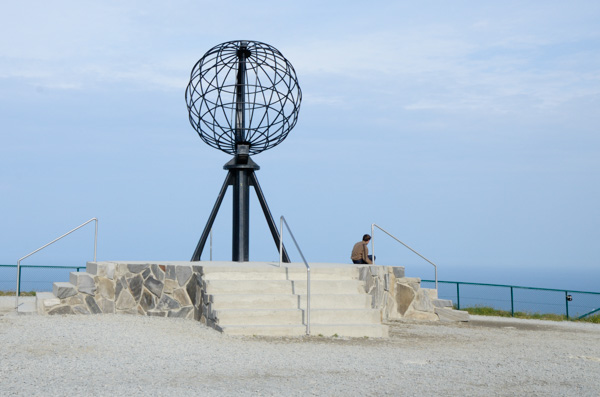 We were extremely lucky to have clear weather. Our guide said that fog can roll in out of nowhere and reduce the visibility to nothing. 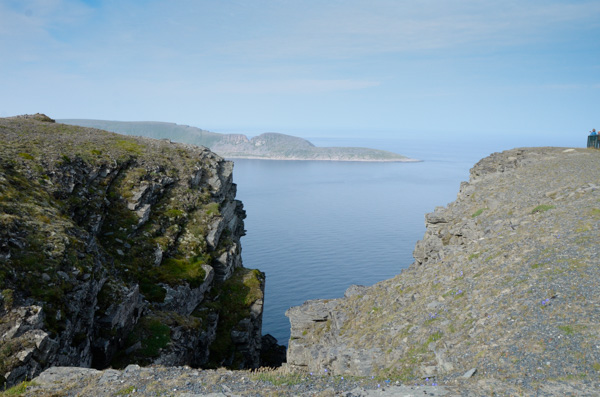 The true northernmost point is in the distance. It's not as dramatic as the sheer cliff of Nordkapp, which was so identified in 1553 by Richard Chancellor, an English explorer who eventually found his way to the White Sea and thence to Moscow. He established trading relations with Ivan the Terrible and was shipwrecked transporting the first Russian envoy to England. The envoy survived, but Chancellor did not. 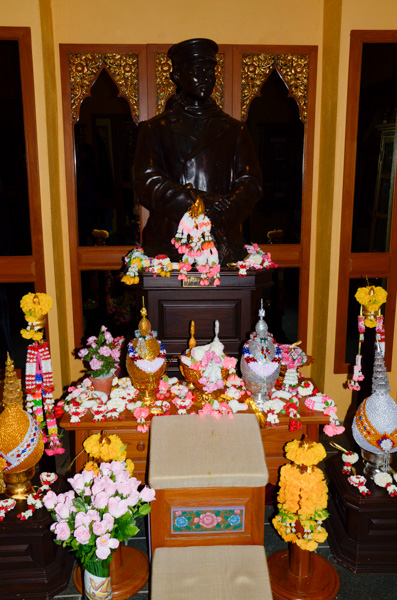 Nordkapp became an adventure tourism destination in the late 19th century. A difficult journey by ship was followed by a climb up the sheer cliffs.

One notable tourist was King Chulalongkorn of Siam, now Thailand. He was the son of king Mongkut,  made famous to many by the musical The King and I. Chulalongkorn visited in 1907.

I vaguely recall that many of the items in the small Thai museum were given by the king to the government of Norway, but I've not been able to verify that.

The sculpture is of the King. 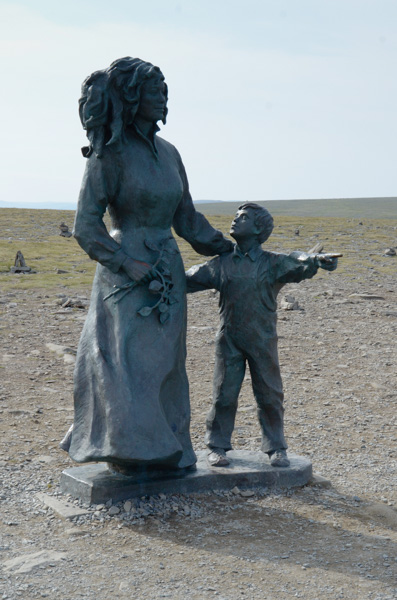 One of the installations at the visitors' center is Children of the Earth. The description posted nearby says: "In June 1988 seven children from different corners of the world were gathered at the North Cape. They stayed here for one week and created together the monument Barn av Jorden 'Children of the Earth' a symbol of cooperation, friendship, hope and joy."

The children were from Tanzania, Brazil, Japan, Thailand, Italy, the Soviet Union and the USA. This sculpture is called "Mother and Child." 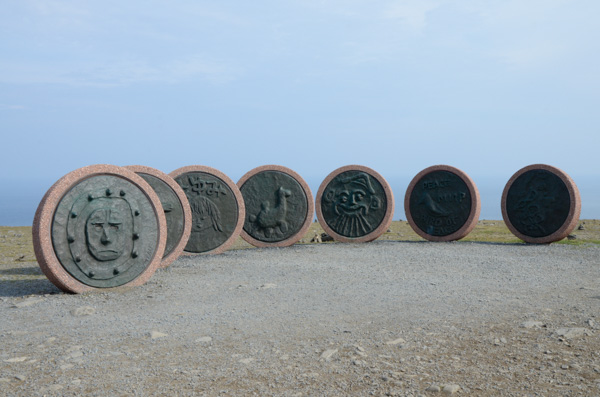 These are the seven individual sculptures designed by the children.

There is an annual Children of the Earth humanitarian prize. 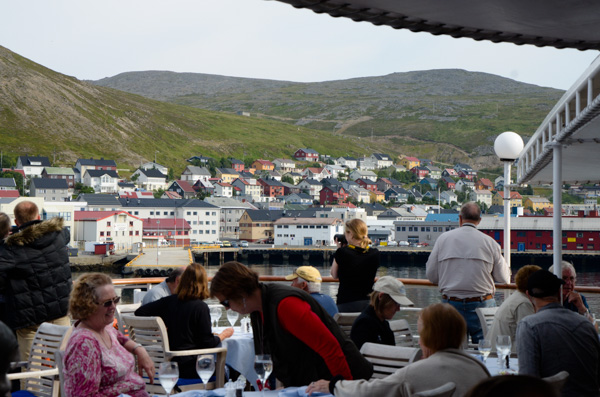 By lunchtime we were back on the ship and sailing for our final stop in Tromsø.

We still marveled at the difference between the Norwegian towns and those in Russia. Ironically Norway is much more of a socialist "welfare state" than Russia nowadays. It hasn't seemed to harm its prosperity. In fact the Legatum Prosperity Index, which measures a combination of wealth and wellbeing, ranked Norway #1 in 2014. The US was #10. 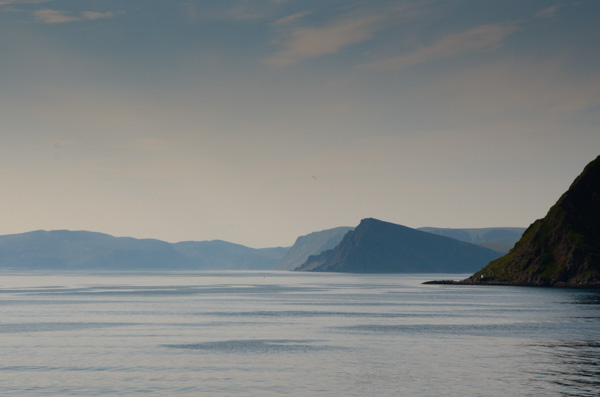 Rather than head out to sea, we cruised the "inland passage" between the mainland and the many offshore islands. It was very beautiful.