Our first stop after Russia was the Norwegian town of Kirkenes, just on the other side of the Norway-Russia border. We learned that residents of Kirkenes drive to Russia to buy cheap gas. Russians come to Kirkenes to buy groceries.

This overview of Kirkenes harbor shows the Island Sky on the right and the larger Hertigruten ship on the left. These ships ply the Norwegian waters on a regular schedule as ferries. Some of them also go on longer cruises.

In contrast to the small Russian towns that we visited, Kirkenes, and our other Norwegian destinations, were uniformly prosperous looking. Buildings were painted and in good repair (in spite of the harsh climate).

Iron mines are a major industry in the Kirkenes area. We drove past some of the mining areas, but didn't visit them.

As we traveled toward our morning destination of the Pasvik Valley, we stopped for a while by this fjord. The silly cutout attached to the fence was quite popular!

Our destination was the Øvre Pasvik National Park Centre. Its garden and  demonstration farm are worth a longer visit.

This beauty appears to be Centaurea montana. Unfortunately it is invasive in the US. There were many other lovely flowers. 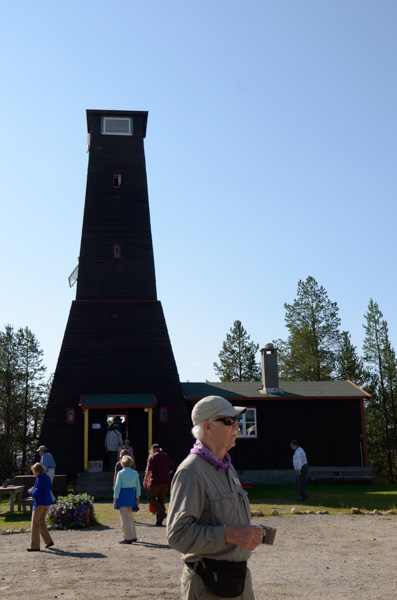 On our way back to Kirkenes we visited this former military watchtower called "Height 96." If we were told the significance of the name, I've forgotten it. 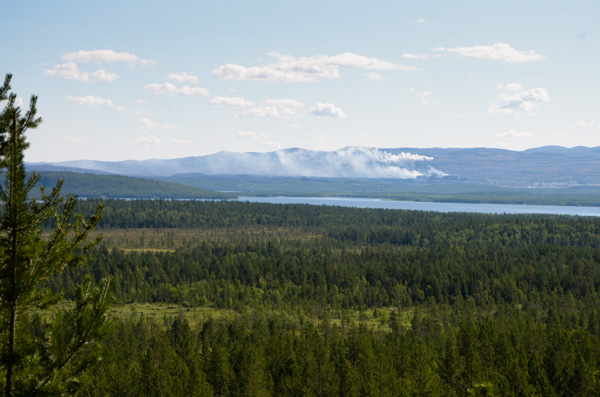 The climb up was spectacular. The view from the top included the Russian city (and mining district) of Nikel. 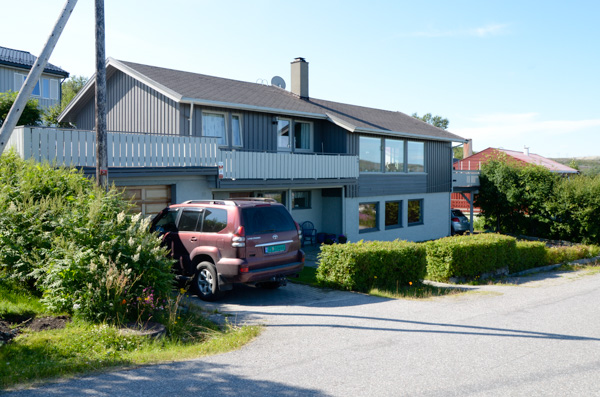 It may seem silly to take a picture of an ordinary suburban house, but after seeing so much housing in Russia that was on the far side of marginal, it was a pleasant sight.

The Russians made excuses about the harsh climate, but Kirkenes is as far north as anywhere we visited in Russia. 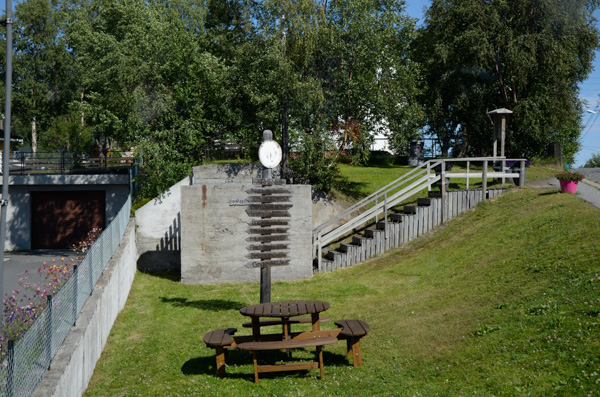 These steps were the entrance to the WWII municipal bomb shelter. Kirkenes was heavily bombed during the war because the occupying German army had navy and air bases here. Very little infrastructure in the town survived the war. 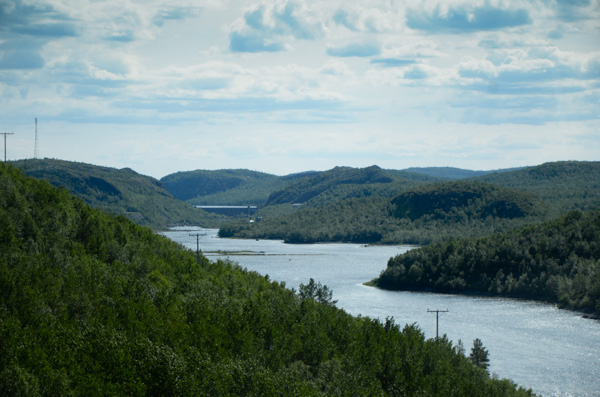 After lunch we embarked for an excursion to "the beach" at Grense Jakobselv. Much of the trip was in view of the Russian border. 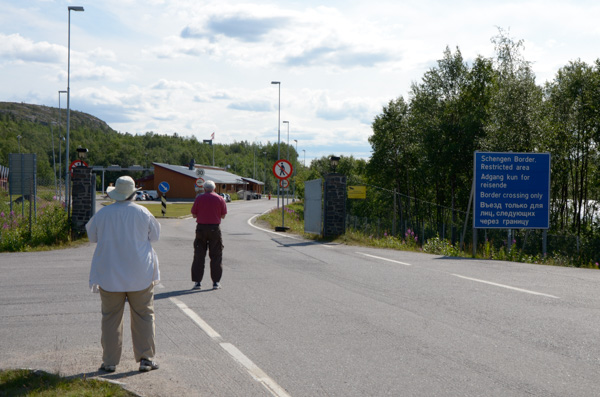 We made a short stop at the only legal border crossing between Russia and Norway.

None of us had any desire to return to Russia. 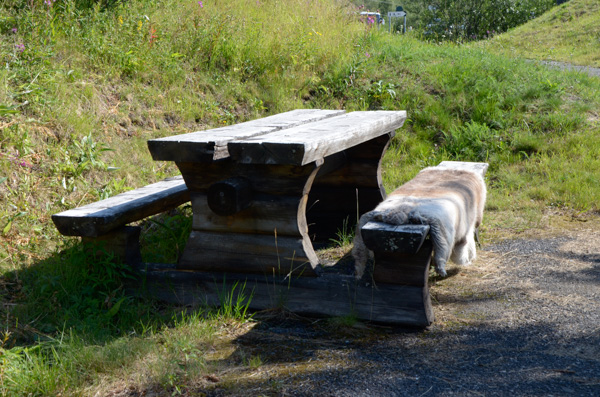 Not far from the border crossing was this sturdy picnic table. One of the benches is covered with a reindeer pelt!

The pelt was very soft and thick in spite of being exposed to the weather for who knows how many seasons. I can see how it would keep the animals warm during the harsh winters. 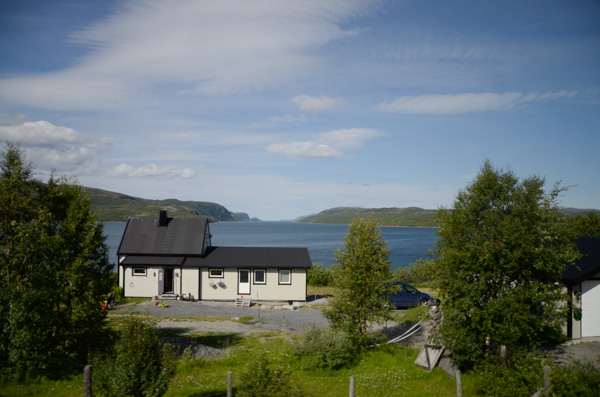 We passed numerous isolated homes on our journey. All of them were in good repair. Our guide said that many of them were summer homes for residents of Kirkenes and other northern Norway city dwellers. 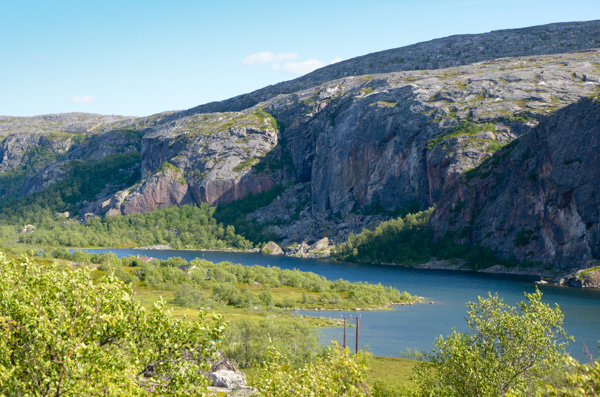 The cliffs on the opposite side of the lake is the "oldest mountain in Norway." Our geologist had lots to say about it, none of which I remember, but I did find this online discussion. These rocks are 2.9 billion years old, give or take. In 2019 an even older rock was identified: over 3 billion years old.

At the same stop there were ancient monuments like those we saw on Kuzova Island. If the place has a name, I don't know what it is.

The oldest monuments (I think) were these in which a large rock rested on smaller ones as shown here. I can't imagine what the significance might be. 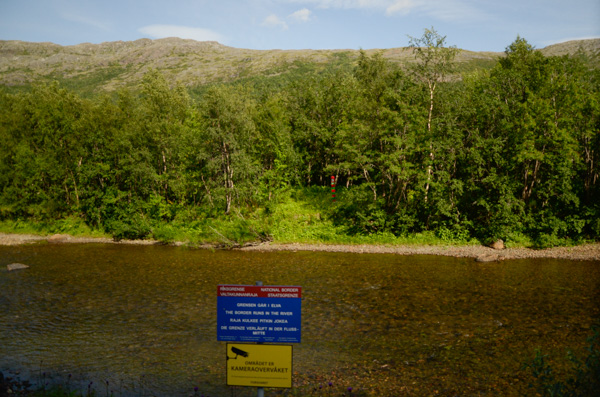 As we traveled further, we entered the valley of the Pasvik River. The Russian border runs along the middle of the river. Although the border looks unsecured, don't be deceived. Unwary visitors who end up on the wrong side may find themselves in big trouble. The sign warns that the area is under surveillance. 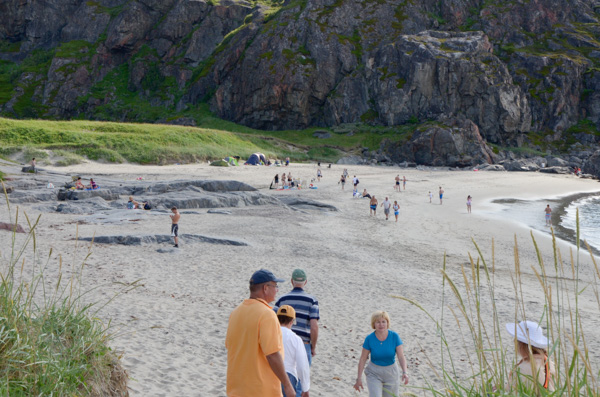 Yes, there was a beach. A very pleasant little cove, in fact. It was popular with the locals, many of whom were sunbathing, picnicking, and yes, swimming. 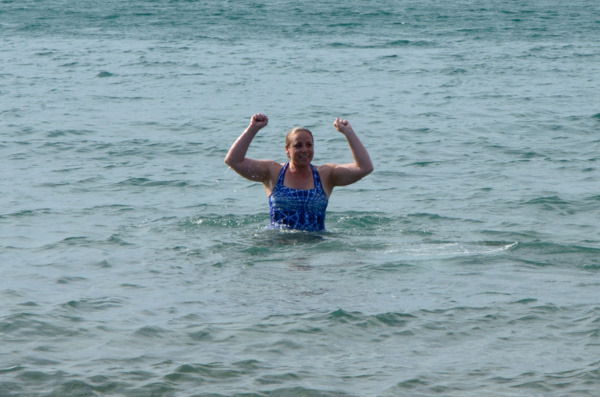 We had been told to bring our swimsuits and several did including Anne Leicher, our Stanford trip coordinator. How many people do you know who have gone swimming in the Barents Sea? 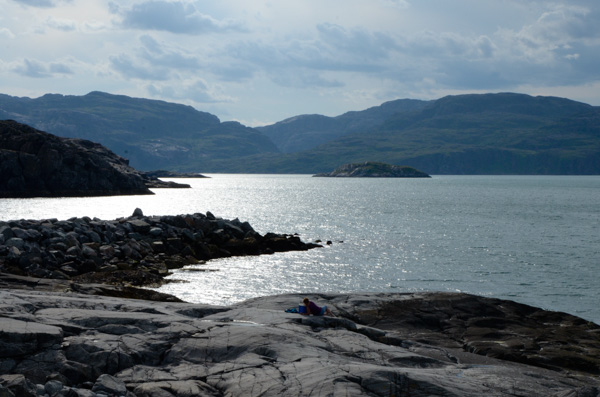 Nearby parts of the shore were glacier-scarred gneiss rocks.

As we traveled back to the ship, I snapped this reindeer through the bus window.

Russia across the river. They are hard to see in this compressed image, but there are watchtowers monitoring the border.

The summer sun didn't set at all in these latitudes until a couple of weeks before our visit. It was down only a couple of hours a day for our trip. We were amazed how cranky we got without NIGHT.

I don't even want to think how cranky we might get without DAY!