Mysteries of the Far North
Murmansk

In the afternoon we enjoyed a city tour of Murmansk. 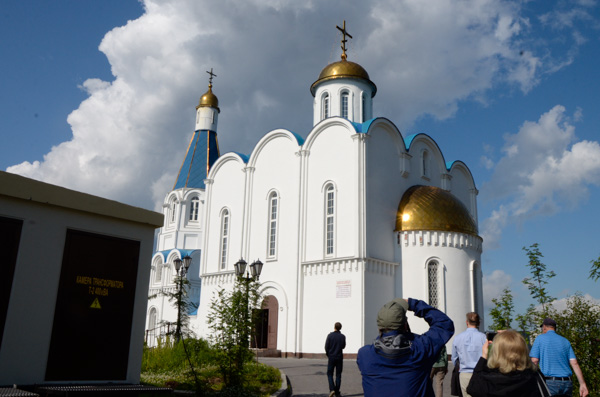 This church, dedicated to St. Nicolas, the patron saint of seamen, and also known as the Church of the Savior on Waters, is part of a memorial complex to those lost at sea. We heard of plans for the construction of a cathedral nearby to be completed in time for Murmansk's centenary in 2016. When the cathedral's cornerstone was laid, a capsule containing soil from the location where the last tsar and his family were murdered was incorporated into the foundation. The project has since been derailed and its future is in doubt. Nevertheless many individuals have profited from the fiasco. 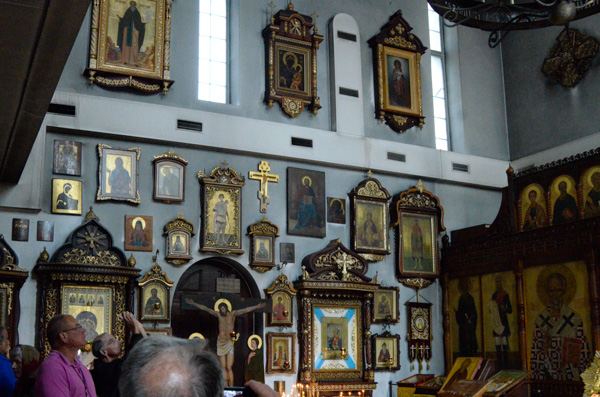 The interior details in addition to the iconostasis were the most elaborate that we have seen. 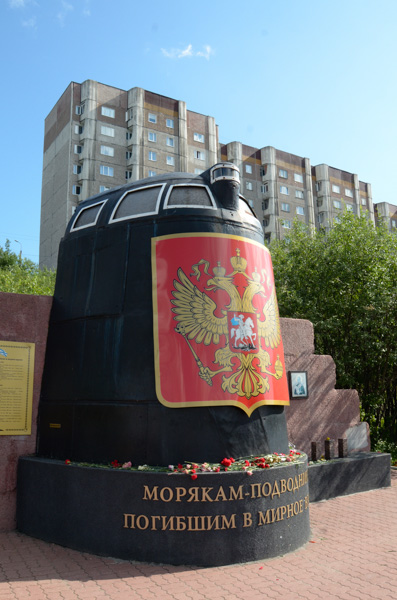 The inscription reads: "To the submariners who died in peacetime."

This is the monument to the 118 men who died on the submarine Kursk, which was sunk in 2000 by a faulty torpedo during some war games. It took the Russian government an unreasonably long time to respond to the disaster. Foreign assistance was at first rebuffed. Then the official party line was that the sub was sunk as a result of a collision with a NATO sub monitoring the war games. Some continue to assert that it was torpedoed by a NATO ship.

In 2009 a reporter found the command tower of the submarine, which had been raised a year after the disaster, at a scrap metal yard. The city purchased it and created this monument.

The only consolation that can be derived from the event is that, although some of the seamen lived for up to 6 hours after the disaster, it would not have been possible to reach the sub in time to save them even if the rescue effort had gone as smoothly as possible. 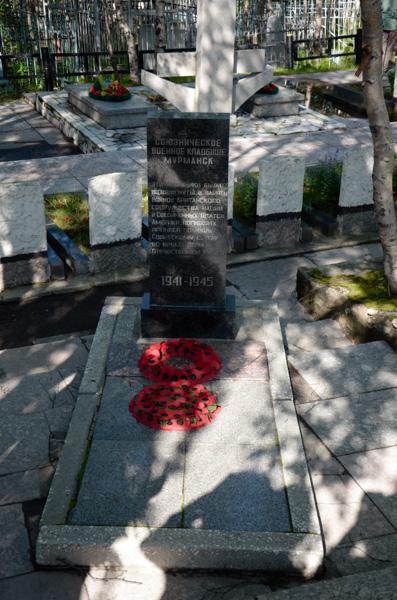 We visited this cemetery and memorial honoring the allied soldiers and merchant mariners who supplied Russia during WWII. Not only had we not heard of the British & US convoys that sent food, medicines and war materiel to the Soviet Union, we were surprised to hear that they were still remembered and much appreciated by the local population.

David Holloway gave an enlightening presentation on the Murmansk Run convoys (the info at the link gives a Canadian perspective). He particularly discussed the infamous convoy PQ-17. The British leadership, fearing imminent attack by the German battleship Tirpitz, ordered the convoy escort to turn back and the merchant ships to scatter. Possibly as a result, only 11 of the 35 cargo ships reached their destination. The rest were lost. 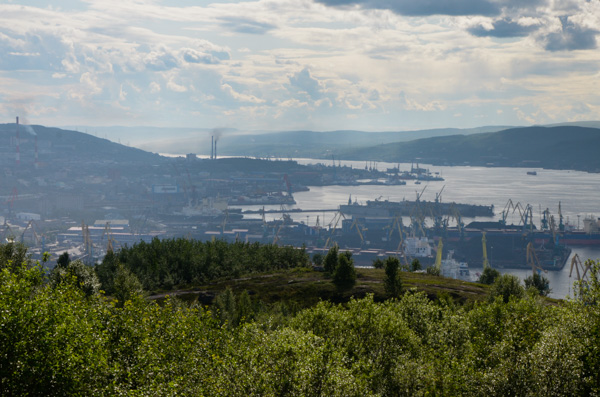 This overview of Murmansk is from the park containing the monument to the "Defenders of the Soviet Arctic During the Great Patriotic War," more commonly known as the Alyosha Monument. 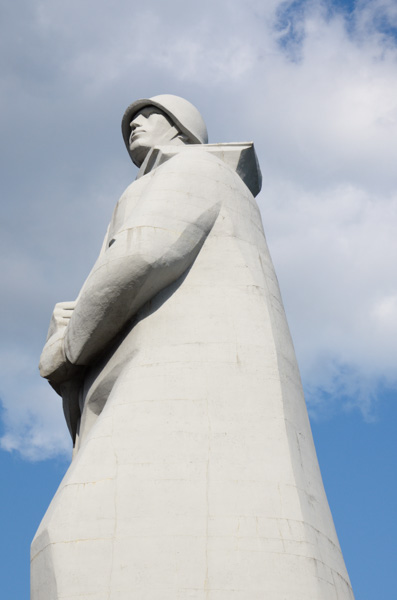 The monument itself is huge, visible throughout the city. 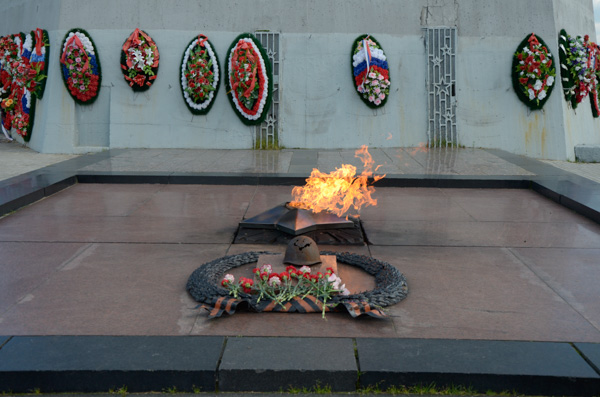 The eternal flame at the base of the monument.

The lozenge-shaped floral arrangements were typical of those we saw at monuments.

Our final monument in Russia was this one to honor all women waiting for their loved one to return from the sea.

Our local paper asks citizens to take the front page with them to document their travels. We carried the paper throughout Russia and kept forgetting to take it along. We finally remembered just in time. 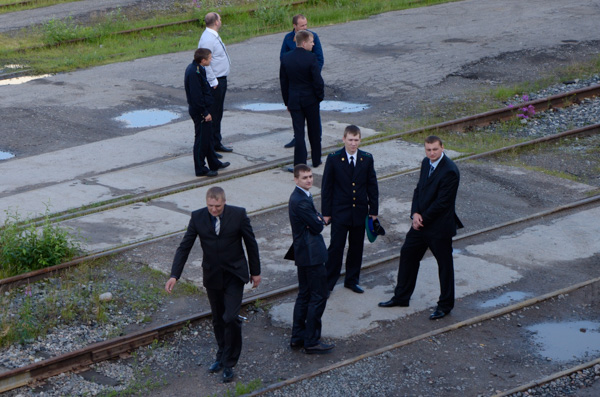 After we returned to the ship, customs and border officials came on board to process the necessary paperwork for us to leave Russia.

With tensions that had been rising ever since we first booked this trip, we were anxious to get clearance and thankful when we did.

We are bidding farewell to Murmansk city, but there is an extensive fjord to be traversed before reaching the sea.

At 8pm the sun is still high. 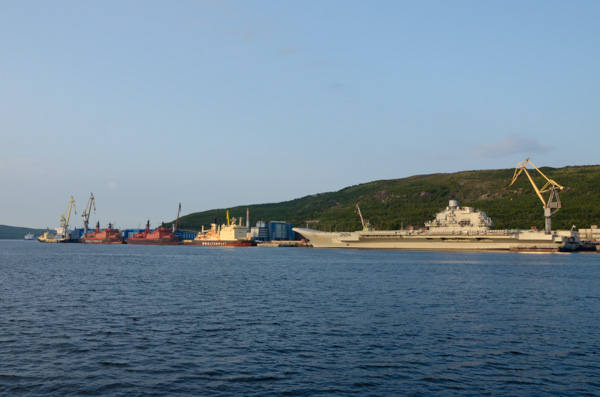 We passed by much of Russia's nuclear fleet. The large ship on the right is the country's only active aircraft carrier, Admiral Kuznetsov temporarily in port for maintenance. The uplifted prow gives lift to planes taking off. U.S. carriers use catapults.

In front of it are icebreakers.

The Admiral Kuznetsov returned to sea shortly after our visit. In the years since it has experienced all kinds of trouble leading to a reputation of a jinxed ship.

A ship receiving maintenance in drydock. I don't know if this is the same drydock that sank while the Admiral Kuznetsov was in it - see the link above. 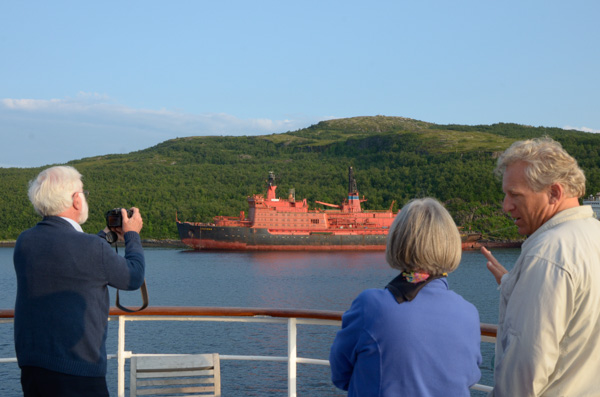 The nuclear icebreaker Arktika was the first ship to reach the North Pole -- in 1977. She was taken out of service in 2008 and has been waiting here for the reactors to cool. 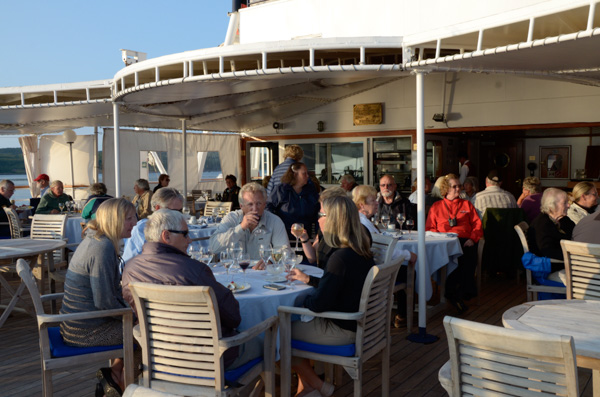 We celebrated our departure from Russia with a festive dinner on the Lido Deck. The side curtains keep the wind away and make it quite comfortable. 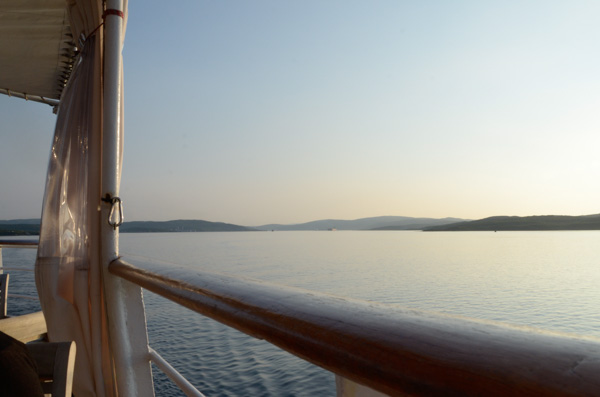 Headed back to the Barents Sea and Norway.