Mysteries of the Far North
Murmansk

We were near the end of our expedition. Jim and I were both looking forward to getting home and ESPECIALLY looking forward to leaving Russia. It is a fascinating country with much beauty and interest, but the constant saber-rattling between the US and Russia throughout our trip was wearing. Plus, to be honest we were getting tired of the constant daylight. Murmansk, Russia's only ice-free European port, was to be our final stop in Russia. 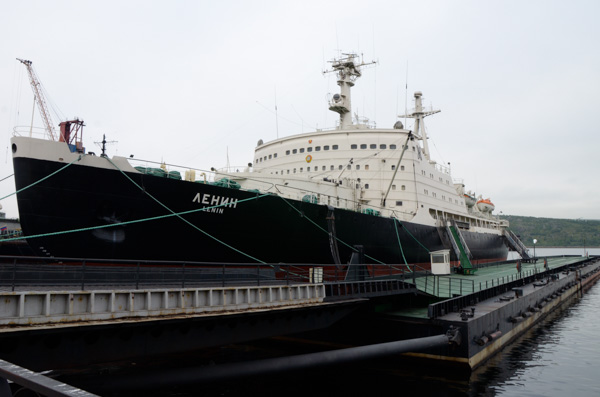 Our morning was dedicated to museums. Lenin was the first nuclear-powered icebreaker. These specialty ships are necessary to keep the ports open as much as possible, and the vast Arctic coast of Russia made it difficult to supply conventional icebreakers. The development of nuclear energy was a huge benefit to the country.

After the ship retired it became a museum. 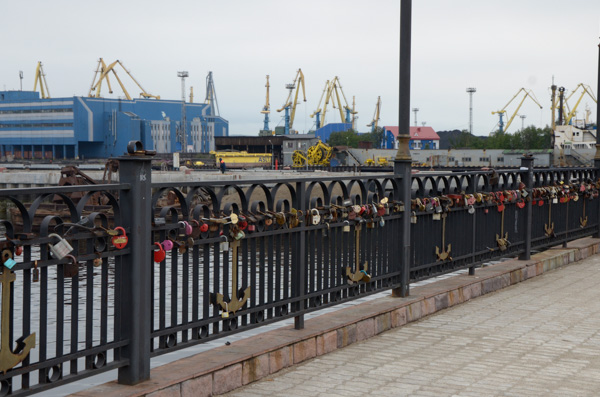 We were a bit early and the museum wasn't yet open. While we waited I became fascinated by the numerous locks on the railing. They are love locks, which symbolize a couple's undying love as they throw away the key. Sweet, but most jurisdictions view them as litter and many have begun to remove them, which isn't the best public relations move. Almost all of the locks had dates, many had engraved names, some had names simply written on. Many of the locks were specially made with two hearts joined together. We have seen them many times since, but this was the first.

Once the museum opened we split into two groups for the tour. The officers' mess was elaborate with fine wooden appointments.

It was adjoined by rooms for relaxation -- one with a piano and one with a fireplace and game tables.

In addition to serving as a museum, the Lenin is also available for conferences. 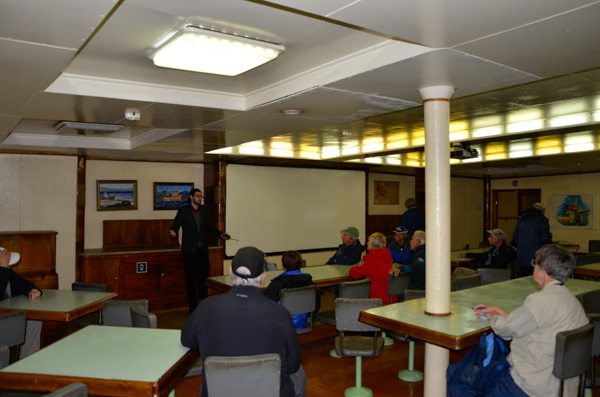 The facilities for the ordinary seamen in the "workers' paradise" were not as lavish.  This is where our guide (standing) gave us the history of the ship.

We viewed a reproduction of the reactor room. All the nuclear material has been removed.

There were at least two nuclear accidents (read down a bit at the link) on the ship, one of which required that the reactors be replaced. The damaged reactor and its fuel were dumped into the sea. That's one way of disposal. 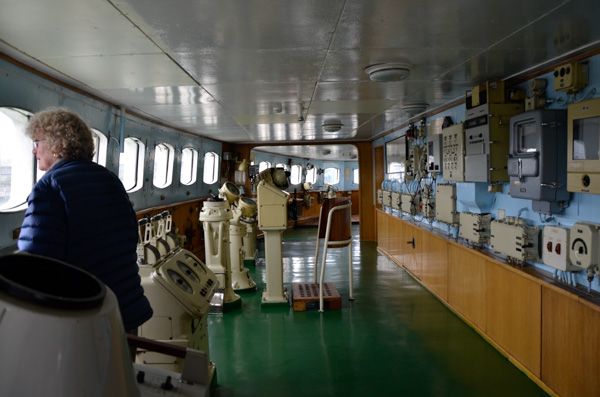 The bridge was a favorite stop on the tour. How could they keep track of all those indicators and dials?

An icebreaker works by pushing its prow up onto ice until the ice gives under its weight. It can shift its internal ballast from side-to-side to rock the ship. To enable this it has a specially shaped and reinforced prow and a rounded bottom leading to an uncomfortable ride on the open sea because of its tendency to roll. (I didn't even like thinking about it!) 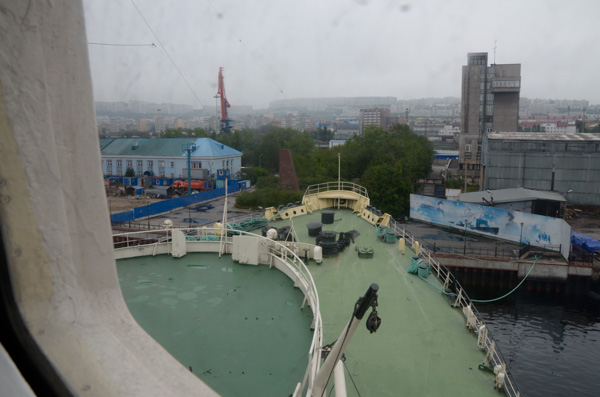 Murmansk from the bridge.

The current top-of-the-line Russian icebreaker, 50 Years of Victory, has a sideline of taking tourists to the North Pole. Because of increased Arctic Ocean merchant travel due to global warming, however, it may return full-time to escort duties. I hope I'm not around to see the day a non-icebreaker can get to the North Pole, but I fear it's coming. 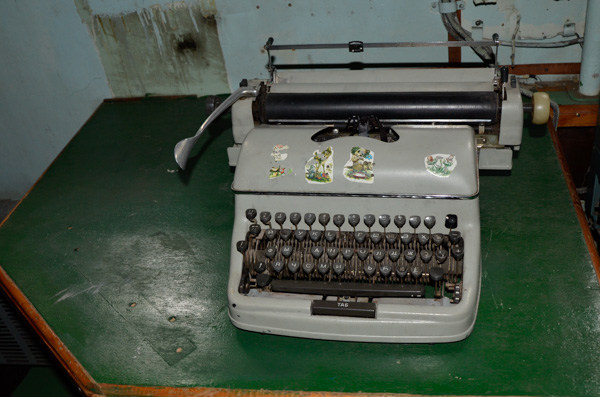 I was fascinated by this Cyrillic typewriter. Young people taking the tour have probably never seen a mechanical typewriter. But the really interesting thing is the stickers decorating it: cute Disney-eque animals. Really? No girlie pictures?

As we left the ship we encountered a television crew who wanted to interview a representative of the American tourists. Two of our number (they wanted a man and woman) volunteered. The questions were mostly of the "what do you think of Russia" variety. We didn't get to watch "News at Eleven" to see if the interviews aired.

The civilian port of Murmansk, seen from the deck of the Lenin, is being refurbished for the city's 100th anniversary. The city was founded in 1915. The last city to be founded by the old Russian Empire. 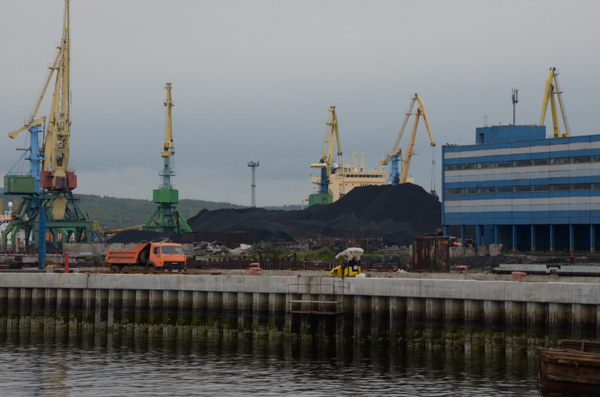 Nearby we could see ships being loaded with coal. The coal comes by rail from Siberia to be shipped from here. Russia may think global warming not a tragic thing if it opens up more ports to year-round sea traffic.

The Museum of the Northern Fleet is housed in this down-at-heels building, which is also a concert venue. 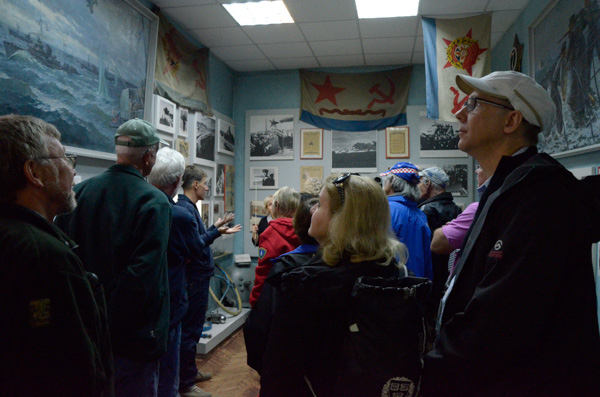 The exhibits were interesting, but the small rooms were claustrophobic, so I quickly bailed and walked around the neighborhood. 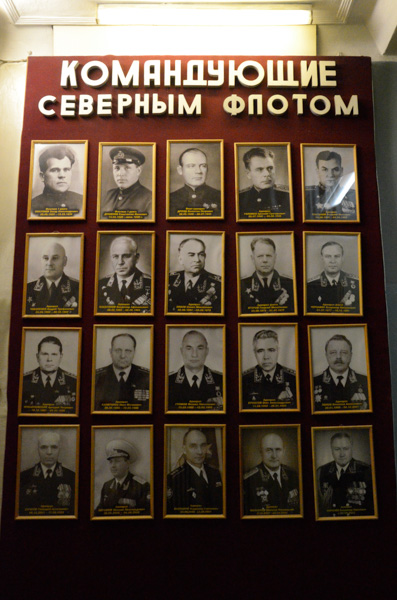 On the way out, I was amused by this display of the commanders of the northern fleet. The earliest one, upper left, who served from 1933 to 1935 had a very plain uniform. I can imagine him calling his associates "comrade." By 1948, upper right, "scrambled eggs" and medals began to appear.

Decorations were added slowly and by the lower right photo (2011) the leader was weighed down by gold braid, medals and other decorations. I wonder if the last tsar had so many indicators of rank. Next thing they will add is a sash!

After the museums we returned to the ship for a gala lunch on the Lido Deck. The staff had outdone themselves with clever carved fruits and other centerpieces.

We tried to eat lunch every day on the Lido Deck. For one thing, the view was better than in the dining room, which had small portholes for windows. For another it was buffet style, so we tended to eat less. It was not usually this elaborate! 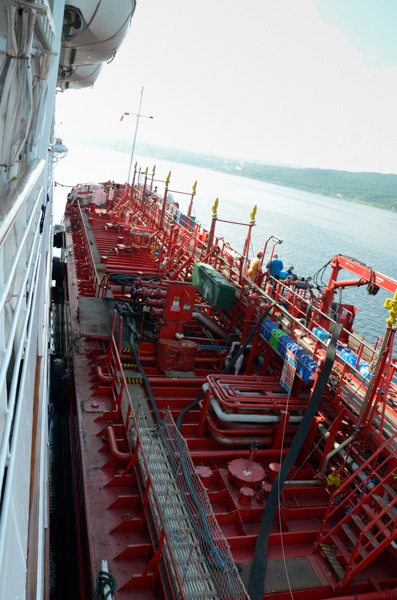 While we were at dock in Murmansk, this refueling barge came alongside. I was fascinated by its size and the seemingly endless pipes and hoses.

Since we had been more-or-less "at sea" since leaving Arkhangelsk almost two weeks earlier, I expect the ship needed a fill-up.